The political instability engulfing some North African states has extensive implications for tourism and aviation across the region. Already dozens of governments are warning their citizens to avoid travel to Egypt. Several have chartered aircraft to ferry their nationals out. Cairo Airport has been met with chaotic scenes in the past few days as thousands of foreigners seek to leave. In this special report, CAPA reviews the immediate aviation and tourism impacts from the North Africa/Middle East civil unrest.

Prospect of a major political transformation

Social unrest sparked in Tunisia has spread across the region, raising the prospect of demonstrations transcending national boundaries. The Middle East/North African region has marked economic, cultural and social differences. The unrest however is occurring in countries where long-standing administrations have become the target of citizens disaffected by high unemployment and low incomes.

A large and growing aviation market

The region has become increasingly important from an aviation perspective.

Overall, the 24 key economies across the Middle East/North African region represent almost 11% of global aviation – about double their share from just a decade ago. This influence has risen on the back of the global hub strategies adopted by several Gulf region governments, accompanied by liberal aviation access policies.

Non-Gulf countries, like Egypt, have continued to pursue conservative policies designed to protect the flag carrier from competition. This has however been tempered by inbound tourism-friendly access for European LCCs and others. The EU has negotiated liberal entry rights for European airlines to Morocco, Tunisia and Jordan. Negotiations with other Mediterranean countries are undergoing under the Euro-Mediterranean aviation project. 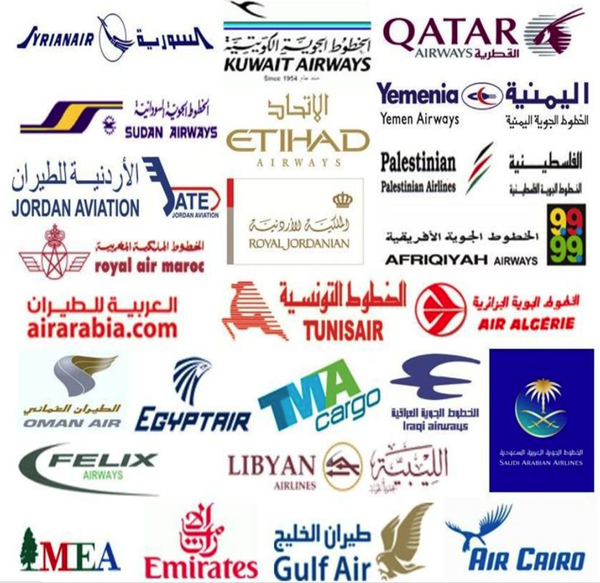 Emirates Airline is the region’s largest carrier by aircraft in service and on order. Saudi Arabian ranks second in terms of fleet size, but is soon to be overtaken by Qatar Airways thanks to the latter’s aggressive fleet expansion plans. Egyptair – at the centre of the current unrest – ranks fourth by fleet size, but it too will be overtaken shortly by Abu Dhabi’s Etihad Airways.

Selected airlines’ fleets in service and on order: As at 31-Jan-2011 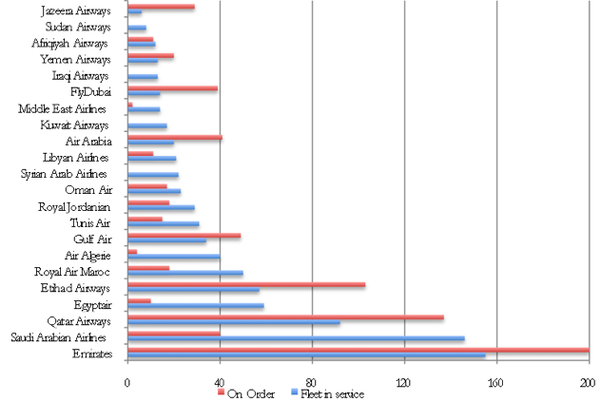 The Top 5 rankings are the same in terms of the weekly capacity the airlines generate from their fleets. 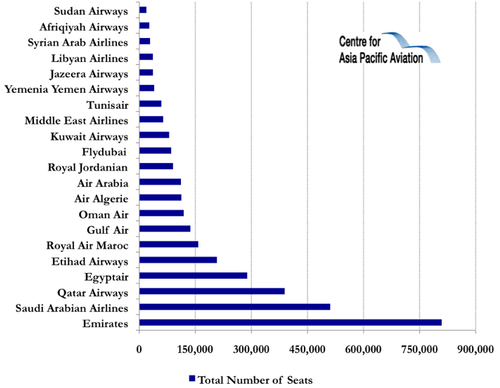 The airline tables in the DATA APPENDIX at the conclusion of this report provides key facts of the region’s major airlines, presented by date of establishment. Full details, including schedules, news and analysis can be found on each of the carriers’ profiles on the CAPA website, centreforaviation.com.

Global alliances are only lightly represented in the region

Several smaller states, such as Jordan have pursued effective restructures of their aviation sectors, involving private investment in their airports and airlines. Royal Jordanian was partly privatised at the end of 2007, resulting in 71% of its shares being sold, while Saudi Arabian, Gulf Air, Middle East Airlines and Kuwait Airways are all at various stages of privatisation processes.

The main global alliances are also increasingly active, although still occupying only a small presence.

oneworld is represented by Royal Jordanian; Star Alliance anchored in the region by Egyptair, soon to be joined by Ethiopian Airlines in Sep-2011. SkyTeam will gain Middle East Airlines and Saudi Arabian Airlines as members in 2012.

The propensity to travel intra-regionally has been rising, particularly in the Gulf states, where LCCs are establishing and fuelling price competition. This effect has overflowed to other countries.

Air Arabia and its joint venture airlines have been immediately impacted by the unrest. But paradoxically, as the instability subsides, the carrier might actually be a beneficiary if other airlines withdraw.

Typically, following a crisis, it has been the LCCs which lead the return to the market, offering very low lead in fares and helping maintain the tourist flows. Air Arabia Egypt’s affiliation with a major travel group will place it well in this respect.

Egypt, Tunisia and Yemen in focus

This report looks at the three countries currently affected by unrest. Others may follow. According to CAPA’s calculations, Egypt accounts for 0.8% of global aviation, while Tunisia accounts for 0.3%. Yemen, also the site of recent protests, accounts for just 0.1%.

Egyptians have a low propensity to travel, at just 0.2 flights per 1,000 population. But it is the fourth busiest market of the countries surveyed, with some 31 million seats operating to/from the country in 2010, of which 86% were international, reflecting the critical role of tourism to the national economy.

Algerians travel more than Egyptians, with 0.3 flights per 1,000 population, but it ranked 13th in terms of market size (9.6 million seats in 2010), due to its smaller tourism sector.

Propensity for travel (Flights per 1,000 population) 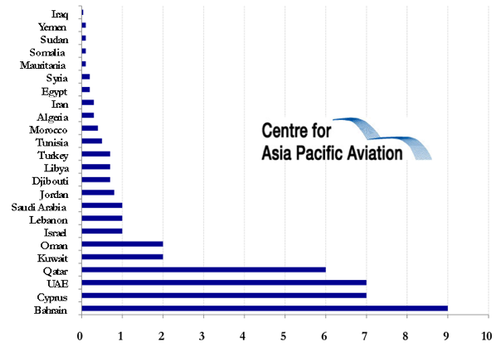 The ‘haves’ and ‘have-nots’ and a “new era” of democracy?

In the lower tier of nations, where incomes are below USD10,000 p/a and unemployment rates are approaching 10% or higher, concerns about the slow pace of economic progress has reached boiling point. (Jordan has enacted wide-ranging economic reforms and is, by all accounts, enjoying social stability).

Bashar Assad, the President of Syria (widely seen as another potential site for political demonstrations), told the Wall Street Journal on 31-Jan-2011 that the protests in Tunisia, Egypt and Yemen spell the beginning of a "new era" in the Middle East in which rulers will have to enact democratic reforms. 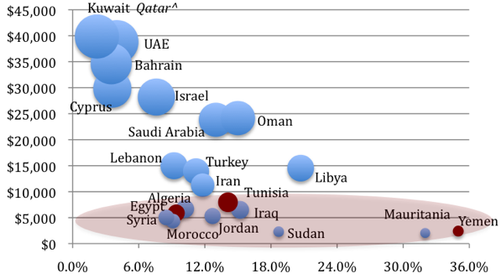 The region is highly strategic from a global political and economic standpoint. A CAPA sample of 24 key economies across the Middle East/North African region reveals a combined population approaching 500 million, combined GDP of USD5 trillion (placing it fourth behind the US, China and Japan) and GDP per capita of some USD17,100 – although this is far from evenly distributed.

The region is also a major producer and key transportation nexus for the petroleum industry. Oil prices have risen around 5% since the crisis began and touched USD100 per barrel in London on 31-Jan-2011.

The International Energy Agency (IEA) issued a statement on the same day urging oil producers to be “sensitive to market signals and exercise flexibility in ensuring ample and affordable supplies.” The IEA added, “Egyptian oil and gas production facilities do not appear to be at risk, as they are far from population centres. While disruption to the Suez passage through the canal and pipeline could have an important impact on oil and gas markets, it does not currently appear likely.”

But there is clearly sensitivity to any shift away from the status quo and the airline industry across the world will be immediately – and perhaps only temporarily - affected by these forces.

Egypt relies heavily on inbound tourism, generating some USD12billion for the economy in 2009, over half of its total exports. 12% of the entire workforce is employed in the tourism sector. Upheaval in this sector will therefore have an immediate effect on the country’s trade profile. Importantly too, this tourism expenditure is dispersed around the country. The bulk of traffic operates through Cairo’s airports, but much of the recent tourism growth has been stimulated as Egypt opened up other gateways to low cost airlines and others (while continuing to protect EgyptAir at its hub).

Egyptair is the biggest international carrier in the country, accounting for 37% of capacity to/from the nation’s fragmented international aviation market. In total, 79 carriers serve Egypt, meaning many airlines will be touched by this crisis. For the majority however, the impact will be relatively light. Those less affected will most likely simply redeploy aircraft onto other routes. (See DATA APPENDIX for airlines operating to the main airports. More detail is available at https://centreforaviation.com/data/profiles/airports/

Saudi Arabian Airlines is the next most exposed to the Egyptian market after the national carrier, with a 6% capacity share, followed by the UK’s Thomson Airways (4%) and Russia’s Transaero (3%). Air Arabia Egypt, whose parent’s Air Arabia’s share price has been slashed by almost 10% since the onset of the crisis, accounts for 2% of the Egyptian market. 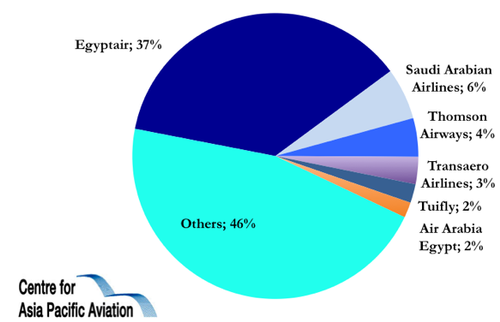 Saudi Arabia is the biggest single market linked to Egypt, accounting for approximately 15% of total international seats, followed by the UK (11%) and the UAE (just under 9%). Much of the European and UK traffic is inbound tourist-related, while the Middle East contains a sizeable element of migrant workers. 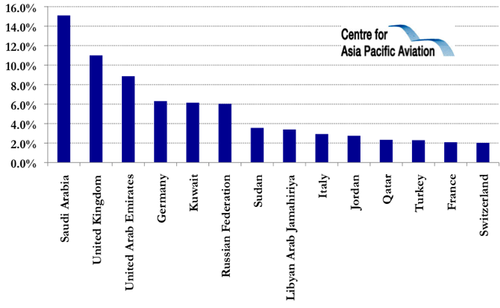 It is to be expected that European inbound tourism will be badly disrupted in the short term (which is also the high season). EgyptAir will inevitably be most affected, as tourism drops and as business travel is cut back. The carrier has been undergoing a substantial turnaround and recently joined the Star Alliance. It will undoubtedly gain some support from its alliance partners, but the impact will be significant and ongoing for the immediate future.

Tunisia enjoyed tourism revenues of just under USD3 billion in 2009, from total exports of around USD16 billion.

Tunisair has a more significant hold on the local market than Egyptair, accounting for almost half of the weekly seats to/from the country. Air France has a large exposure, accounting for 11% of total capacity, while Libyan Airlines has a 5% share. 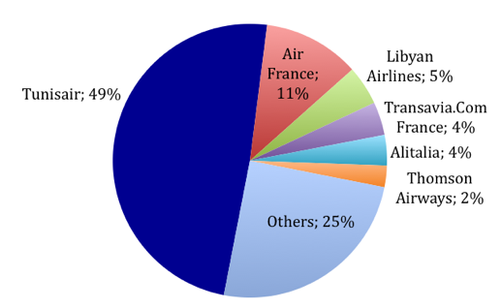 France is by far the largest source market, accounting for more than a third of total weekly seats, followed by Syria and Italy, according to OAG. 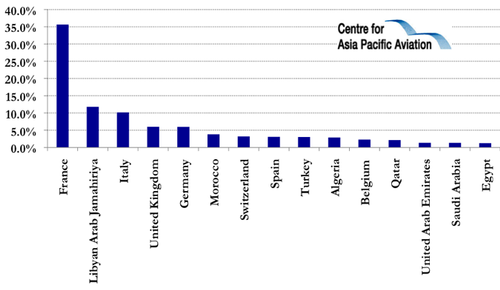 Here again, flag carrier Tunis Air will be the most badly hit by instability, although the carrier will attract business if other main carriers withdraw. 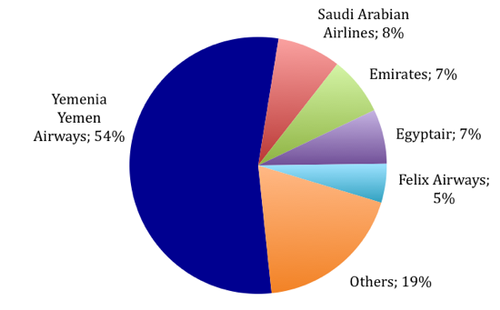 Saudi Arabian destinations account for a quarter of all weekly seats, followed by the UAE and Egypt. 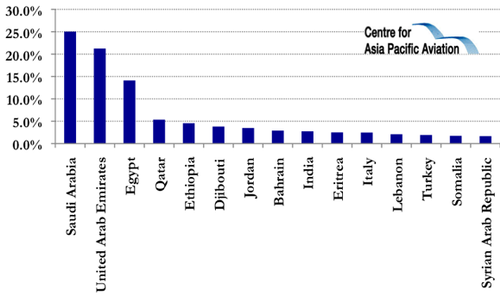 While it is ‘business as usual’ at the Middle East’s major aviation hubs, there is a risk that rising social unrest could have a short-term impact on overall travel to/from/via the region, as foreign travellers shy away.

Air travel demand boomed in 2010, although international passenger numbers increased by just 2.8% on routes to/from/within the ‘Arab world’ in Nov-2010, registering its slowest growth in at least 12 months off the previous year’s strong base, according to the Arab Air Carriers Organisation (AACO).

The UAE is the largest market of those countries surveyed by CAPA (some 86 million seats in 2010), thanks to the aggressive growth of Emirates, Etihad and Air Arabia. Turkey was second largest (around 67 million seats), and is growing rapidly.

Saudi Arabia (47 million seats) ranks third, followed by Egypt and Qatar rounds out the Top 5. There are 11 second-tier nations with 10-25 million seats per annum, including Jordan, Tunisia, Lebanon, Kuwait, Bahrain and Iran. 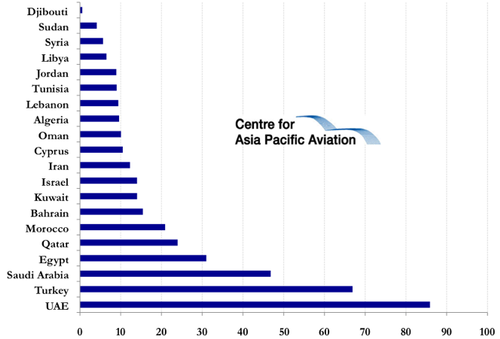 Several of these second tier aviation markets offer considerable growth potential. The brightest of these include Qatar, with a per capita GDP of some USD85,000, Kuwait and the UAE, although all of these have small home populations of less than 5 million inhabitants. 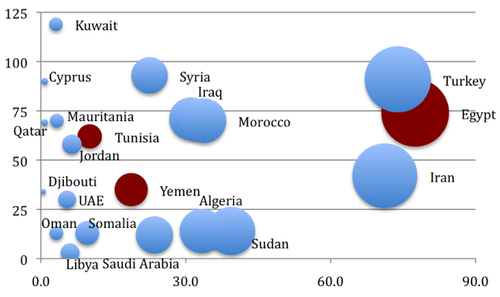 Sources: International Monetary Fund, Apr-2009, All GDP figures are for 2008, except Syria and Lebanon
which are 2000, World Bank, July-2009, Centre for Asia Pacific Aviation & various

Development will therefore be patchy, with pockets of strong demand growth, where economic reform and social stability are present. For the poorer countries in the region, the coming months could be a painful period. But if the transition processes are relatively peaceful, the accompanying political and economic reforms could unleash a new era of growth and investment in the aviation sectors of those countries over the medium term. 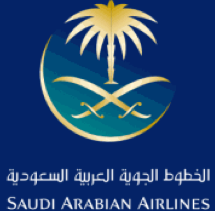