Australian carriers Qantas and Virgin Australia have built substantial virtual global networks with each relying on large long-haul operators to carry their passengers beyond their Asia-Pacific networks.

Qantas and Virgin Australia have recognised that as end of line carriers they cannot compete with network airlines such as the Gulf and Asian carriers that can aggregate passengers at their geographically advantageous hubs. The Australian carriers are instead using the long-haul capacity pipelines these carriers offer to serve markets they lack the capital to service in their own right.

Virgin Australia led the way, initially with a neighbourhood alliance with Air New Zealand effectively merging their trans-Tasman business. The carrier, under the stewardship of new CEO John Borghetti struck a deal with Gulf carrier Etihad, securing access to the European market. Similar deals with Delta Air Lines followed adding the United States coverage and finally perhaps the most important of them all, Singapore Airlines.

Qantas struck back with its own seismic announcement that it would partner with the biggest of them all, Emirates in a move that provides the platform to stem heavy losses on its long-haul network and return it to profit in FY2015.

Virgin Australia appears to have gained the upper hand, for now, in the important Asian market through its alliance with Singapore Airlines (SIA), while Qantas refocuses and reconfigures its offering to their region which no longer serves as a transit hub for its much depleted European operations.

Qantas and Emirates, however, is by far the bigger deal providing a more extensive and cohesive virtual European network.

Qantas’ alliance with Emirates, which took effect on 31-Mar-2013, has given the Australian flag carrier one-stop access to 32 points in Europe and up to 50 via various other relationships, including long time partner British Airways. Emirates also provides onward connections throughout the Middle East.

As part of the Emirates alliance, Qantas has moved its double daily London stopover hub from Singapore to Dubai. The carrier's only other remaining European route, Sydney-Singapore-Frankfurt ends on 15-Apr-2013. 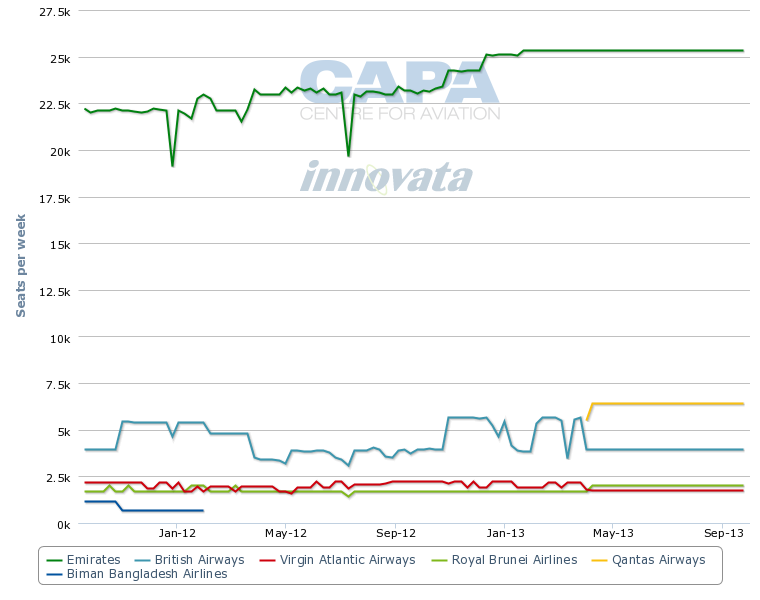 The Emirates deal also ended the nearly 20-year old joint services agreement (JSA) on the so-called Kangaroo Route with British Airways, along with codeshares with Air France to Paris and Cathay Pacific from Hong Kong to Rome.

Emirates operates the bulk of the alliance’s west-bound capacity

Collectively Qantas and Emirates operate 70 direct one-way flights per week offering about 28,000 seats per week to Dubai from Sydney, Melbourne, Brisbane, Adelaide and Perth. The vast majority of this capacity, about 21,000 seats across 56 flights per week, is provided by Emirates. Qantas operates twice daily A380 services to Dubai, one from Sydney and the other from Melbourne. Both those services go on to London, making it the airline’s biggest international route.

The Emirates alliance is putting some early runs on the board, with bookings running at six times the rate of Qantas’ sales to Europe under previous partnerships. 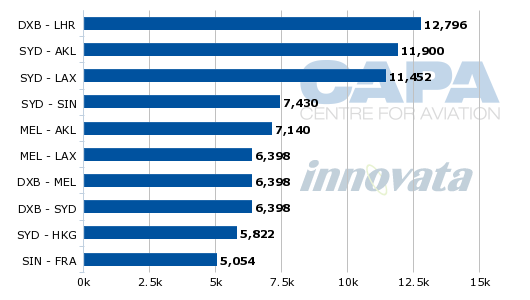 In addition Qantas will codeshare on another 28 Emirates’ Melbourne-Singapore, Brisbane-Singapore, Sydney-Bangkok and Melbourne-Kuala Lumpur services, providing Qantas with extra capacity to Asia.

For Emirates the alliance provides onward connections on Qantas’ domestic network for the 77,000 seats it sends to Australia each week direct from Dubai and via Southeast Asia. 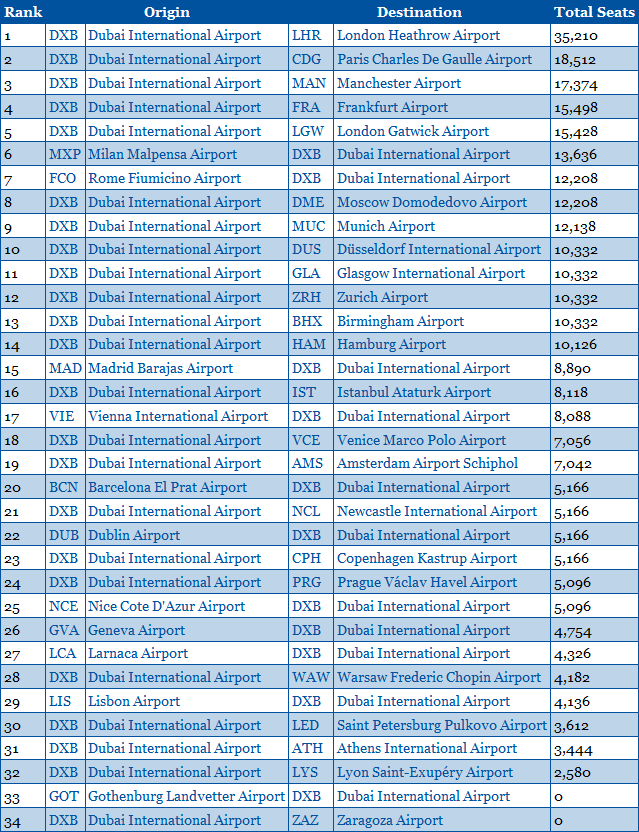 The American Airlines codeshare is Qantas’ second most extensive after Emirates, distributing its passengers from Los Angeles throughout the United States and Canada, including via American Airlines’ hubs at Dallas Fort Worth and New York JFK.

Qantas operates to Los Angeles from Sydney twice daily with one of those frequencies going on to New York. The airline also operates daily Sydney-Dallas as well as Melbourne-Los Angeles daily and Brisbane-Los Angeles six times per week.

Qantas has increased capacity to the US to about 14,600 one-way seats per week from about 12,700 in Apr-2012 with all that capacity being added to the Sydney-Dallas route where the airline has a monopoly. 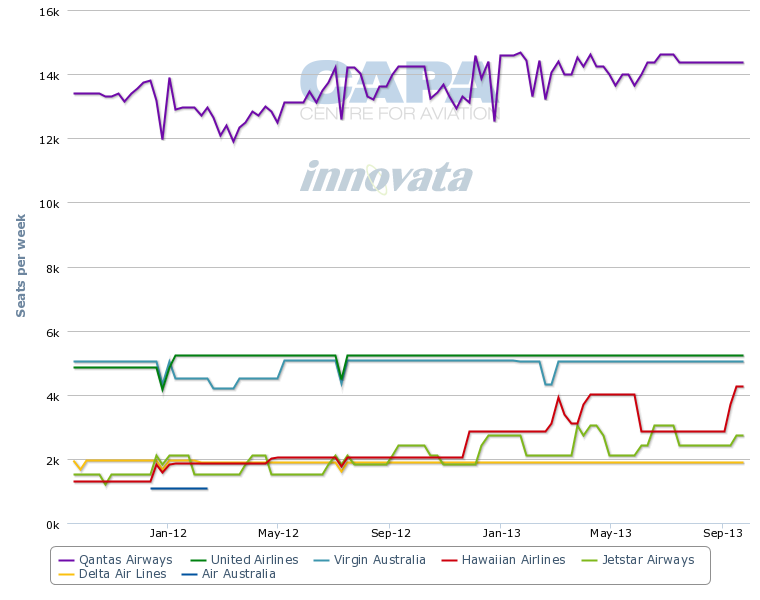 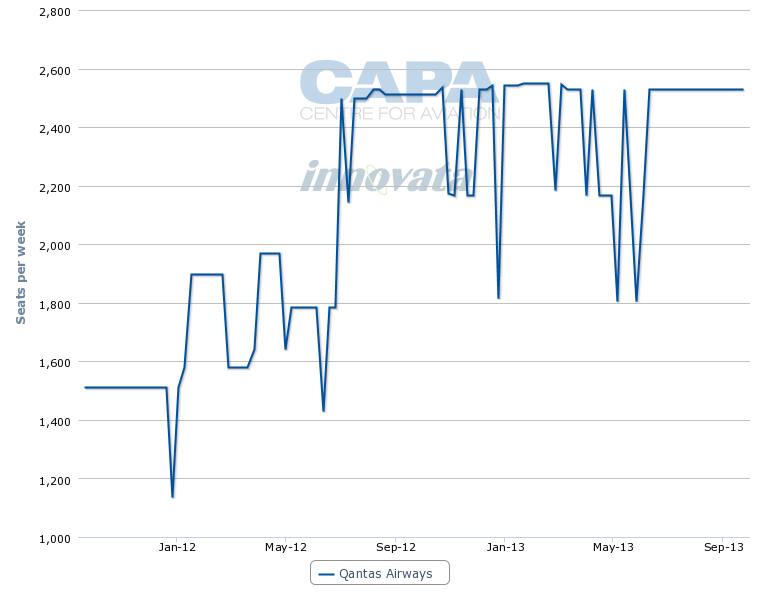 Qantas codeshare partners: as of Apr-2013

Qantas is retiming and redeploying capacity to Singapore and Bangkok to create more favourable onward connections to other Asian destinations on partner airlines. Before switching hubs to Dubai, about half of Qantas’ traffic to Singapore continued on to Europe. That freed-up capacity will in effect increase the number of Qantas seats terminating in Asia by about 40%, despite a reduction in seats overall on the route by the airline.

The extra capacity will allow Qantas to better compete against Asian carriers, including SIA in the fast-growing Australia-Asia market. Qantas is, however, in need of a North Asian partner to provide better access to China, with China Eastern considered a possible contender. Qantas already codeshares on China Eastern's daily Melbourne-Shanghai service and the pair are in a joint venture to establish Jetstar Hong Kong.

Qantas also intends to use Jetstar affiliates to gain onward connections behind the main Asian gateways. The question remains, however, whether passengers, especially premium travellers, will be prepared to switch from a full service carrier to an LCC for onward flights in Asia.

It was Virgin Australia’s success in forming a relationship with Etihad and the access it gave to the European market that made Qantas reassess its direction.

Virgin Australia has pursued a strategy of developing a global virtual international network through strategic alliances with Etihad, Delta, Singapore Airlines and Air New Zealand. Each of these partners has also taken an equity stake in Virgin Australia, further deepening the relationships. The airlines’ founder Virgin Group owns 26%, Air NZ 20%, and Etihad and SIA 10% each. 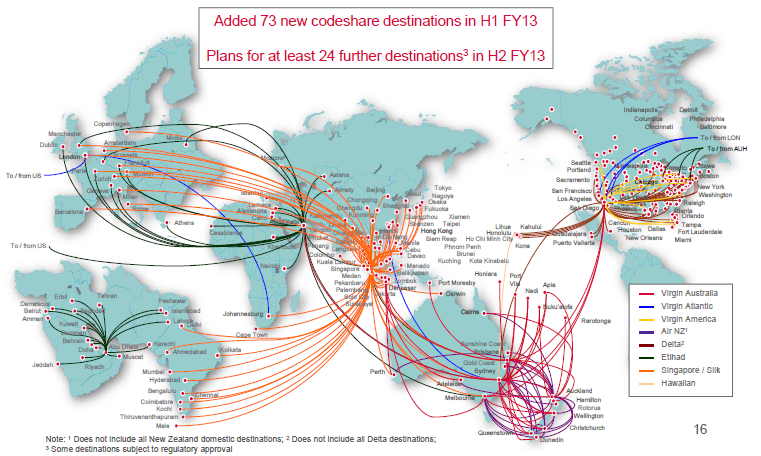 Europe is covered by codeshares with both Etihad and SIA. Etihad provides all its 16 European destinations and SIA its 12 destinations. But there is considerable overlap with six markets (London, Manchester, Paris, Frankfurt, Munich and Moscow) served by both partners, giving Virgin Australia a European network of 22 destinations. A seventh market will see overlap from 15-May-2013 when Etihad launches service to Amsterdam, a destination already served by SIA.

London is the largest route for both SIA and Etihad. SIA has the greater capacity, offering four daily frequencies and about 22,000 one-way seats per week. Etihad operates three times daily to London offering about 16,000 seats per week.

The Etihad codeshare, and to a lesser extent the SIA codeshare, also extend to Africa where Etihad offers access to five destinations including Cairo, Alexandria, Casablanca, Khartoum and Nairobi. SIA operates to Johannesburg, but this route is significantly longer and less convenient than the direct services operated by Qantas and SAA.

Delta provides for a pan-United States network linking to Virgin Australia’s services to Los Angeles from Brisbane, Sydney and Melbourne.

Virgin Australia operates on the trans-Tasman routes to New Zealand through an extensive codeshare agreement with Air NZ. The alliance with the New Zealand flag carrier was the first building block of Virgin Australia’s virtual network.

Virgin Australia and Air NZ announced their strategic revenue sharing alliance in Apr-2010. The metal neutral partnership aimed to create a second Australasian airline system that could better compete against the powerful Qantas/Jetstar group as well as the growing threat from Emirates.

The union allows the two carriers to collude on aspects of their operations, providing some much needed respite from aggressive competition which had turned the route into a loss maker.

Air NZ is the dominant partner, operating 16 trans-Tasman routes offering a total of 29,000 seats per week compared to Virgin Australia’s 11 routes and about 12,700 seats.

Schedules have been optimised to take advantage of each carrier’s respective hubs. Air NZ operates most of the peak time slots favoured by corporate travellers between its Auckland base and Sydney and Melbourne. Virgin Australia operates off-peak frequencies on those routes and a stronger presence on leisure routes, particularly from its Brisbane hub. 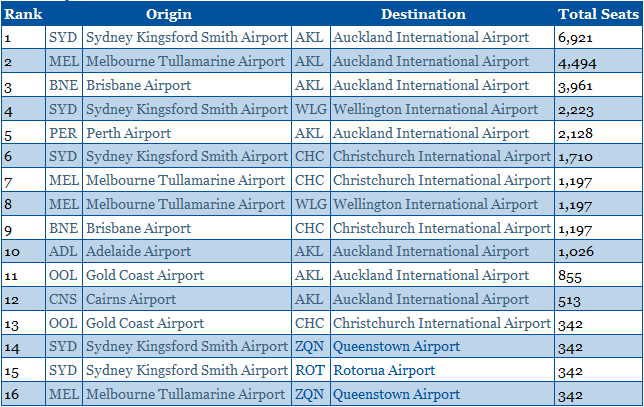 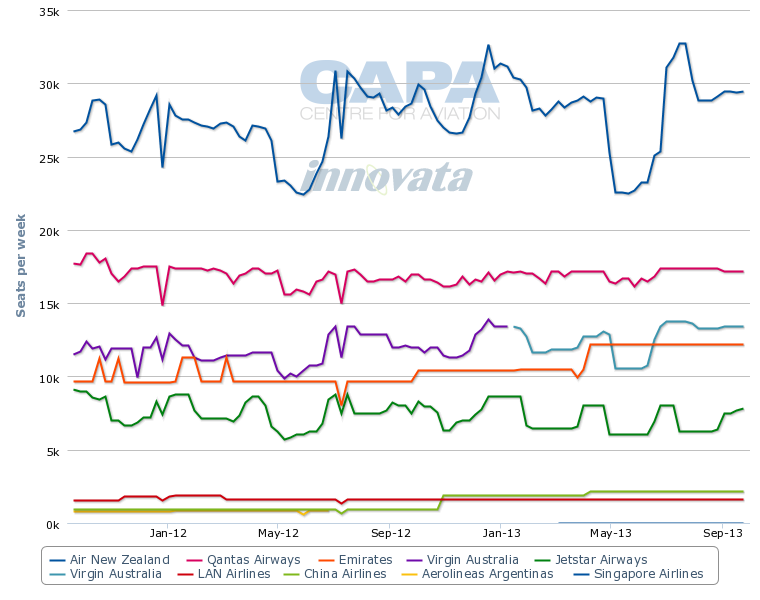 Qantas and Emirates prepare to extend their alliance across the Tasman

Virgin Australia and Air NZ’s position on the Tasman is set to be challenged if Qantas and Emirates receive final clearance to extend their alliance to New Zealand. The ACCC has already given its interim approval subject to the carriers maintaining their pre-alliance capacity on four key routes. Qantas and Emirates are still awaiting approval from the New Zealand Minister of Transport.

Qantas and Emirates will have a combined capacity share of about 36% with Qantas 21% and Emirates 15%. If Jetstar’s nearly 10% is added, the total comes to about 46%, almost matching the Air NZ/Virgin Australia alliance.

Virgin Australia and Air NZ have applied to the Australian Competition and Consumer Commission for a renewal of their alliance for a further five years.

Having consolidated its loss making trans-Tasman operations, Virgin Australia announced its “game changing” partnership with Abu Dhabi’s Etihad, in Aug-2010. The alliance marked the start of Virgin Australia's concerted effort to challenge Qantas’ dominance of the corporate market both internationally and domestically. 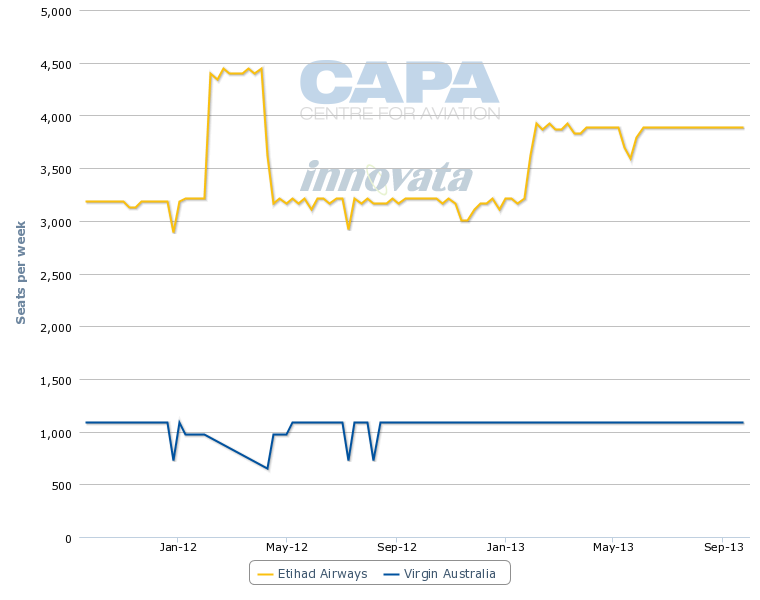 Etihad also operates daily Abu Dhabi-Melbourne, offering nearly 2,000 seats per week. Its daily service from Abu Dhabi to Brisbane via Singapore is not part of the codeshare agreement. The route is also not covered by the Virgin Australia alliance with SIA.

Original plans for Virgin Australia to add three Brisbane-Abu Dhabi frequencies per week from Feb-2012 have not eventuated. Neither did plans to operate Melbourne-Abu Dhabi which, along with the Brisbane service, were to take Virgin Australia’s total number of weekly services between Australia and the Gulf state to 27. 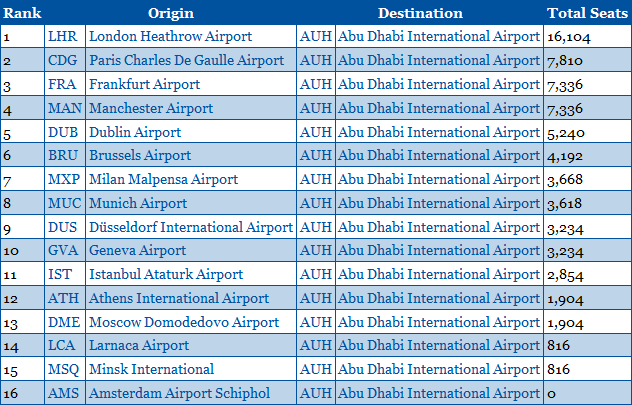 Note: Amsterdam service is launching in May-2013
Source: CAPA – Centre for Aviation & Innovata

Virgin Australia and Delta began codesharing in Jan-2010 and gained anti-trust immunity from the DoT allowing the airlines to fully cooperate on network planning and distribution in 2011. The alliance combines Delta’s service to Sydney with beyond service on Virgin Australia as well as beyond service in the US to Virgin’s Los Angeles service.

Qantas, however, still dominates the trans-Pacific market, operating up to three times the capacity on the three routes served by Virgin Australia with about 13,600 one-ways seats, excluding nearly 1,000 seats to Honolulu. 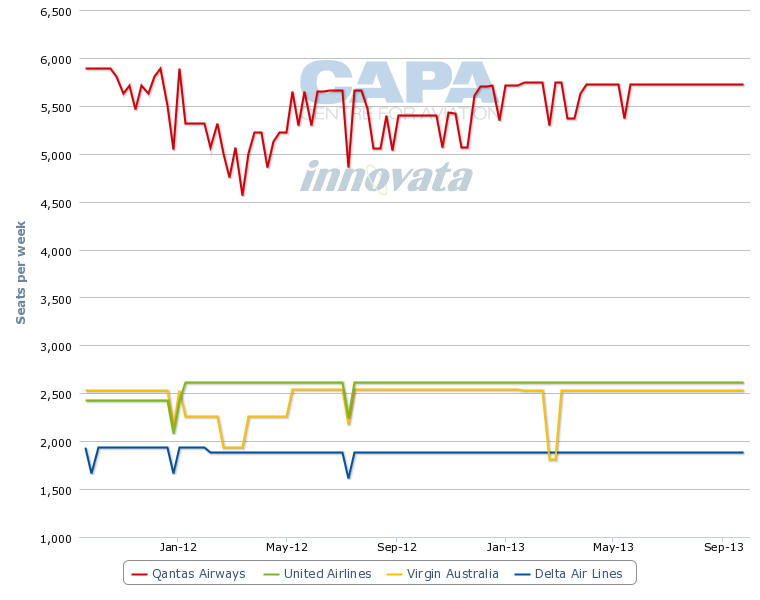 With the Tasman, Europe, the Middle East, Africa and the United States ticked off, Virgin Australia turned to Asia and reached agreement for long term alliance with SIA in Jun-2011. The SIA alliance, forged little over a year after securing the trans-Tasman alliance with Air NZ, was a critical element in the strategy for Virgin Australia to secure a 20% share of the Australian corporate market.

The deal also provided SIA with its long sought after access to Australian domestic beyond destinations.

The alliance was initially limited to SIA’s Asian network, avoiding conflicts with the Etihad partnership. SIA and SilkAir offer extensive access to Southeast Asia, but also north to the Chinese cities of Beijing, Shanghai, Chongqing, Chengdu, Guangzhou, Hong Kong, Xiamen and Kunming, as well as Seoul in South Korea and Tokyo, Osaka and Fukuoka in Japan.

As impressive as Virgin Australia’s network building efforts are, the Qantas-Emirates alliance is significantly bigger on each side. Qantas and Jetstar together command about 60% of the domestic market while Emirates offers a vastly larger capacity across a broader network with greater frequencies. 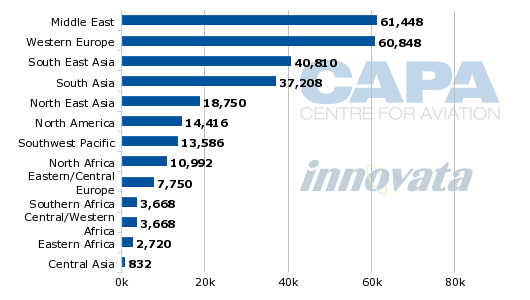 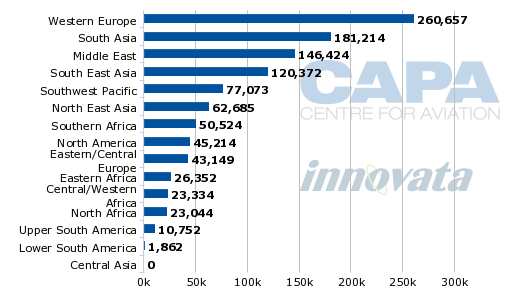 For Qantas, Emirates has provided a lifeline for unsustainable westbound long-haul operations and allowing the airline to refocus on the economically important Asian market.

Virgin Australia has secured its position as Australia’s second carrier with its deft negotiations to secure a complex set of alliances to establish a genuine virtual long-haul network.

But both Qantas and Virgin Australia will need to add partners in Asia to provide market penetration beyond the main gateways. Qantas is likely to eventually develop its relationship with China Eastern while Virgin Australia could turn to Cathay Pacific, offering the carrot of Australian beyond access to the Hong Kong-based carrier which is already offering extensive services to Australia.