Singapore Airlines (SIA) and Virgin Australia have announced plans to establish a long-term alliance that, if it meets regulatory and competition approvals, has the potential to transform competition in Australia-Asia markets and increase competition for Qantas in its core domestic and international premium travel markets. For Virgin, SIA completes the alliance puzzle that now stretches east to New Zealand and North America with Air New Zealand and Delta, respectively, west to the Middle East, North Africa and Europe with Etihad, and now north to Asia with SIA, as well as simultaneously feeding its domestic operation.

Should it be approved, the SIA deal would cap a very successful first 12 months for Virgin Australia group of airlines CEO John Borghetti, who has cut back loss-making routes, rebranded the airline and established a high-potential network of bilateral partnerships. The benefits of Virgin's coverage of the compass should flow within the next 12 months.

Mr Borghetti calls the partnership with SIA "a huge step for us" and "a game changer" because "it really completes our alliance strategy we started 12 months ago". He says the partnership is in particular key to achieving Virgin Australia's goal of securing a 20% share of the Australian corporate market.

Under the agreement, the two airlines propose to:

SIA and Virgin Australia will start interlining in Aug-2011. Codesharing, frequent flyer links, schedule coordination and joint pricing will follow once approval for the partnership is secured, expected by the end of 2011. Both carriers do not expect any major problems in securing the required approvals.

The agreement is the next step in a rapidly evolving Southeast Asian aviation environment, following the announcement of Jetstar's long-haul expansion from Singapore; the Jetstar-AirAsia JV (which was announced over one year ago but could be given fresh impetus soon); Qantas' possible full service carrier in Singapore; SIA's announcement earlier this month to establish a low-cost long-haul airline at Changi and Malaysia Airlines' announcement of plans yesterday to enter the oneworld alliance.

CAPA expects Qantas, who is sponsoring Malaysia Airlines' accession, could look at developing a full blown partnership with the Kuala Lumpur-based airline in response to the Virgin-SIA deal. See related report: Malaysia Airlines poised to enter growth phase, but yield concerns persist. Where to with alliances?

At least for the time being, Virgin Australia's beyond-Singapore destinations are to be limited to within Asia, thus avoiding stepping on the toes of Virgin Australia's very successful partnership with Etihad, whose European routes add greatly to the Virgin Australia offering. One valuable addition will be in the enhanced opportunities for connections between Australia and India, where current service levels are not helping expand the market.

SIA and Virgin Australia will lodge an application for authorisation with the Australian Competition and Consumer Commission (ACCC) to enable them to cooperate across a broad range of commercial functions. (See alliance timetable section below).

Singapore Airlines CEO Goh Choon Phong said: “Singapore Airlines has been committed to the Australian market for more than 40 years and we are always looking for ways to serve our customers better...The partnership presents a significant opportunity for Singapore Airlines to drive growth in a manner consistent with our focus on service excellence, product innovation and network connectivity. It will enhance the attractiveness of Australia as a travel destination while also opening up new horizons for travellers from Australia.”

Mr Borghetti said: “Asia is clearly a critical market for us as we build our international alliance network. Singapore Airlines’ extensive network throughout Asia will be particularly attractive to our international business and leisure travellers and this partnership, along with our other alliances, will mean Virgin Australia can now offer truly global flight coverage. With the recent re-positioning of our brand and the launch of our product enhancements, including domestic business class, Virgin Australia and Singapore Airlines are ideally suited as airline partners.”

While SIA becomes Virgin Australia's second Star partner after Air New Zealand, Mr Borghetti says joining a global alliance is currently not under consideration. "It's something we'll think about in 2012 and beyond," he says, adding Virgin Australia is now focussed only on implementing the new bilateral relationship with Singapore Airlines.

Changing the balance of power

SIA and Virgin aim to coordinate schedules between Singapore and Australia and beyond to provide seamless connections. SIA is making a push on the Australia-Singapore market later in 2011, according to schedules filed with Innovata, whereas Qantas is holding its capacity steady in the Northern Winter schedule. This will take SIA's capacity share on Australia-Singapore segments from 50.5% now to around 52.4% in Nov-2011, while Qantas' share will fall back from 26.5% to 25.6%. Emirates, the third largest carrier in the market, will see its share fall from 8.8% to 8.5%. The Virgin deal should support SIA's load factors to Singapore. 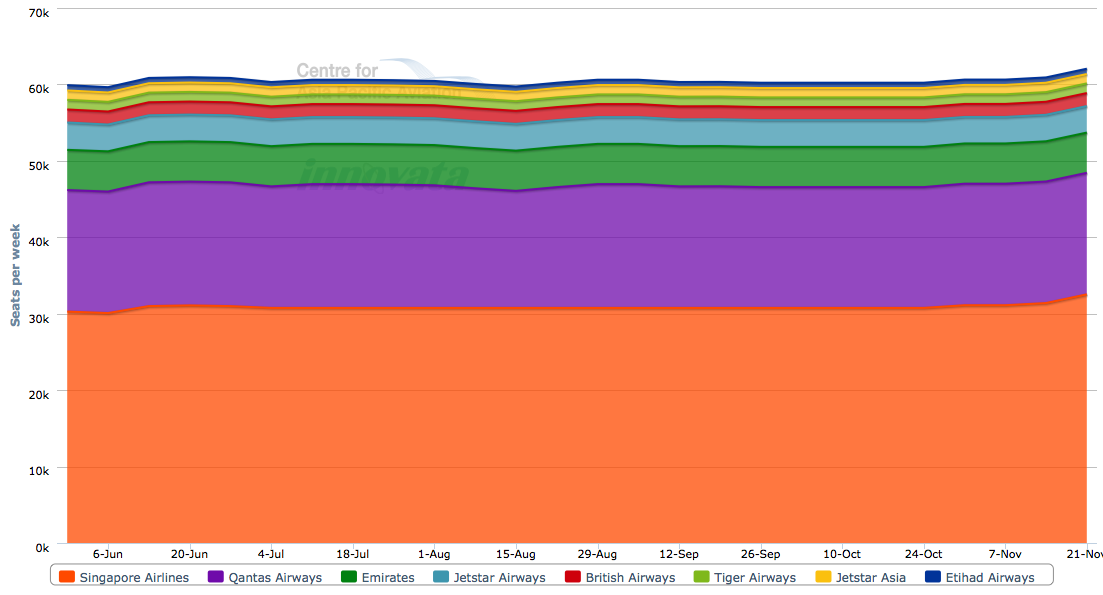 For SIA, the codeshare opens up connections to 30 additional cities in Australia. SIA currently has a large online presence in Australia with services to Adelaide, Brisbane, Melbourne, Perth and Sydney. But it has no offline access to the rest of Australia, including important business destinations for Australia's fast-growing mining industry. Mr Goh says the tie-up will boost SIA's corporate product in Australia and open up new options for SIA's frequent flyer members in Australia.

In a later phase, SIA may also start to codeshare on Virgin Australia's flights to the US. This would require special approval from Australian regulators as SIA currently does not have rights to codeshare on US-Australia flights. But such approval shouldn't be too difficult to secure - certainly not as difficult as getting approval to operate its own Australia-US flights, which SIA previously made repeated attempts to receive.

For Virgin Australia, the deal opens up Asia. Mr Borghetti in particular singled out India as being key. SIA and SilkAir currently serve 10 cities in India, giving Virgin Australia an attractive and in many cases unmatchable one-stop product on several fast-growing Australia-India city pairs. 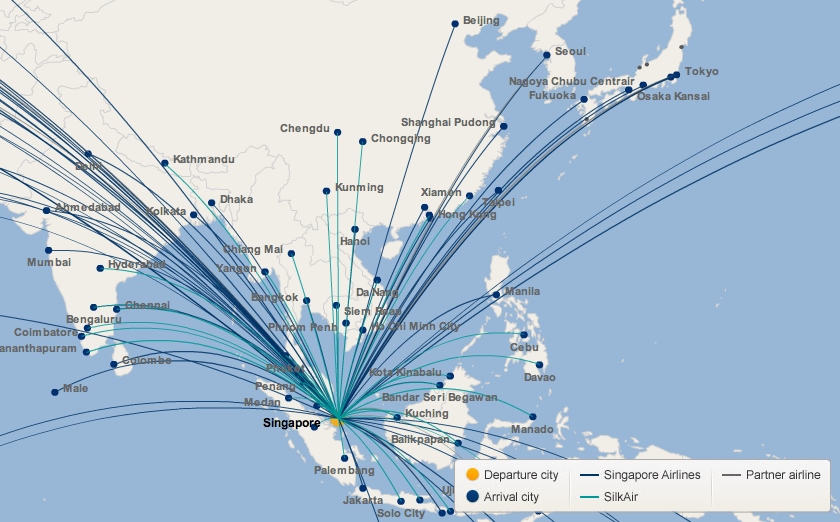 From Singapore, Qantas operates its own aircraft to London, Frankfurt and Mumbai. It operates non-stop from Sydney to Tokyo, Shanghai, Hong Kong, Bangkok, Singapore and Jakarta, while Jetstar serves Osaka and Denpasar from the Australian commercial capital. Additionally QF codeshares from Sydney to Ho Chi Minh City and Seoul. From Melbourne, QF serves Hong Kong and Singapore with its own aircraft, while Jetstar serves Denpasar and Bangkok and QF codeshares to Ho Chi Minh City from Melbourne.

Virgin will be able to offer multiple daily one-stop services to each of these cities and many more through its SIA partnership, subject to approvals.

The partnership is strictly commercial with no equity tie-up. SIA currently has a stake in Virgin Atlantic but has been keen for some time to sell this stake. "If someone comes along with a good offer we'll look at that offer," Mr Goh says.

Mr Goh hinted that the partnership wtih Virgin Australia and SIA's new long-haul low-cost carrier would not be the last step in the SIA Group's new strategy to respond to the rapidly changing industry landscape. "In this business one has to be flexible and nimble. We will not stop there," Mr Goh says.

Another step in Virgin Australia's relentless quest for the corporate client

The SIA partnership - which will extend to relatively intimate sharing of capacity and pricing - is a very big step in Mr Borghetti's highly focussed quest to wrest another 10% share from Qantas in the vital corporate market. SIA already has a substantial international market share but in combination the two carriers should be able to leverage their joint value beyond simply adding their respective levels. Qantas will undoubtedly see this as a greater challenge than Virgin' previous partnership moves (with Delta, Air New Zealand and Etihad), as SIA has long been the biggest thorn in the Australian flag carrier's side and will now gain effective access to a much larger Australian market, using Virgin Australia's metal.

But the untidy - and never dull - march of progress moves another jump with this move. By getting close to another Star Alliance partner, Virgin Australia necessarily increases speculation that it is moving closer to membership. This does not however appear at this stage to be Mr Borghetti's strategy, nor would it seem to be the best option to be committing to any one of the large groups, where such a  move might curtail further opportunities at bilateral alliances.

Inevitably this is therefore just one more step in the unfolding story, not the end game, once again opening up myriad opportunities - and potential for conflict, as those partnerships threaten to overlap. Rumours abound that Etihad is considering joining oneworld; and in the torrent of activiity, Qantas' sponsorhip of Malaysia Airlines also promises to raise long term possibilities of dual hub operations for Qantas in southeast Asia. On top of speculation about a Qantas full service subsidiary in Singapore and an SIA long/medium haul low cost operation, today's announcement follows a very busy few weeks of strategy ping-pong.