Air France remains the biggest airline in Paris by some distance, but low cost airlines have grown their share of seats in recent years. Air France's in-house LCC, Transavia France, has only slowed the tide, while competitors such as easyJet and Vueling have taken market share. Norwegian has also been part of this low cost onslaught, initially on medium haul and now on long haul routes to the US.

Air France has not fully been able to defend its Paris share against LCC competition by the use of Transavia, a genuine low cost operator focused on medium haul and based in Orly. As long haul low cost competition grows, it will hardly be any easier for Air France to defend its position with its new CDG-based subsidiary Joon, which operates both medium haul and long haul and does not even set out to be a low cost airline.

The Paris airport system is dominated by the two big airports owned by Groupe ADP, namely Paris Charles de Gaulle (CDG) and Paris Orly, which handled 101.5 million passengers between them in 2017 (a year-on-year increase of 4.4% and the first time they had exceeded 100 million). 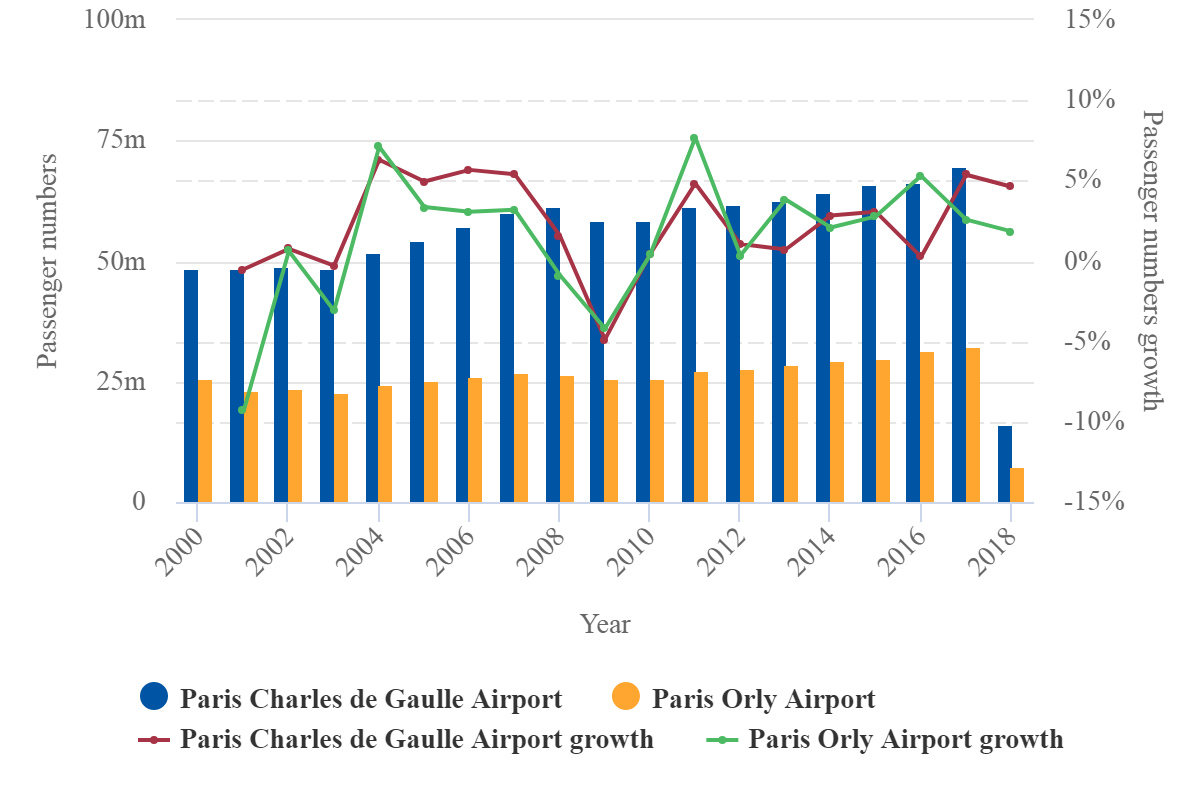 The 2017 total of 105.2 million passengers for the Paris airport system of CDG, ORY and BVA  is second in Europe only to London's 205 million (but it is a distant second).

A fourth Paris airport, Paris Vatry, is mainly a cargo base, but also handles a very low volume of passenger traffic (mainly in the summer). In 2017 only 122,000 seats were flown from Vatry, and no traffic figures are known.

In 2018, according to data from OAG, there are only three weekly passenger flights from Vatry, operated by Ryanair to Marrakech (once a week) and Porto (twice weekly), adding up to less than 60,000 annual seats.

LCC passenger numbers grew by 53.4% in the period 2012 to 2017, accounting for 8.6 million of the additional 12.5 million passengers in the system over that period (almost all BVA traffic is with LCCs). 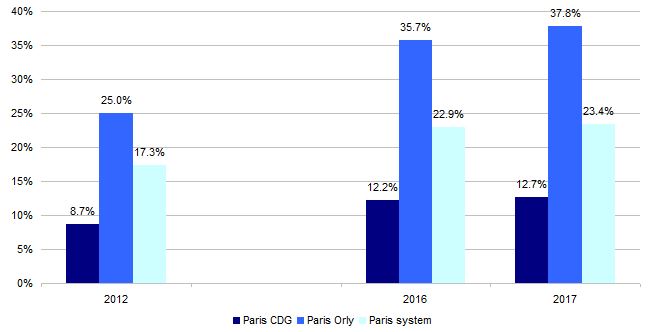 Paris Beauvais-Tillé's is almost all LCC traffic, led by Ryanair

BVA has been essentially an all low cost airport throughout the period (Air Moldova, its only non-LCC, has had a very small seat share varying between c0.5% and c1.5% since 2014). 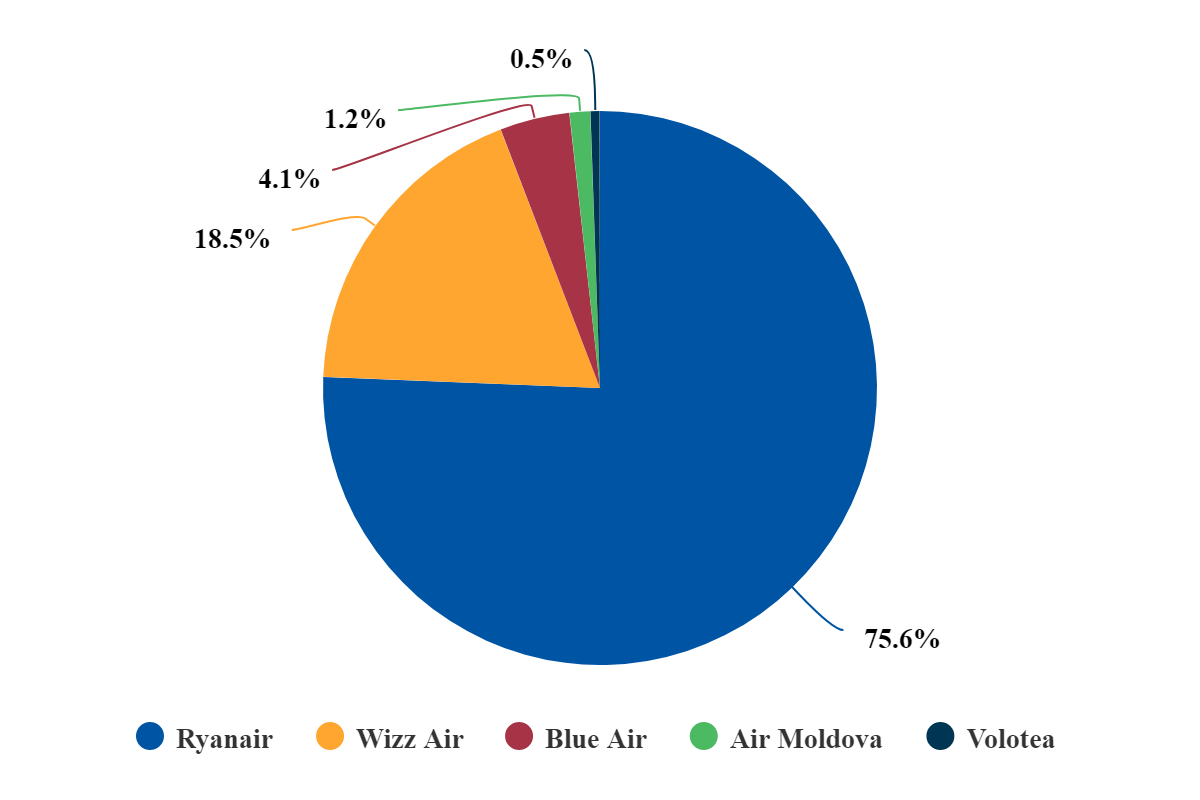 Air France still Orly's biggest airline, but the airport has the most LCC seats

This has been led by the growth of Transavia France, the LCC subsidiary of Air France-KLM, and supported by Vueling's growth. EasyJet has been relatively stable at Orly over this period.

Transavia's growth at Orly has been (deliberately) at the expense of Air France, but the national flag carrier remains the airport's largest airline presence, with 30.6% of seats in the week of 9-Jul-2018. Transavia France is number two, with 16.4% of seats, followed by Vueling with 8.6% and easyJet with 6.8%. 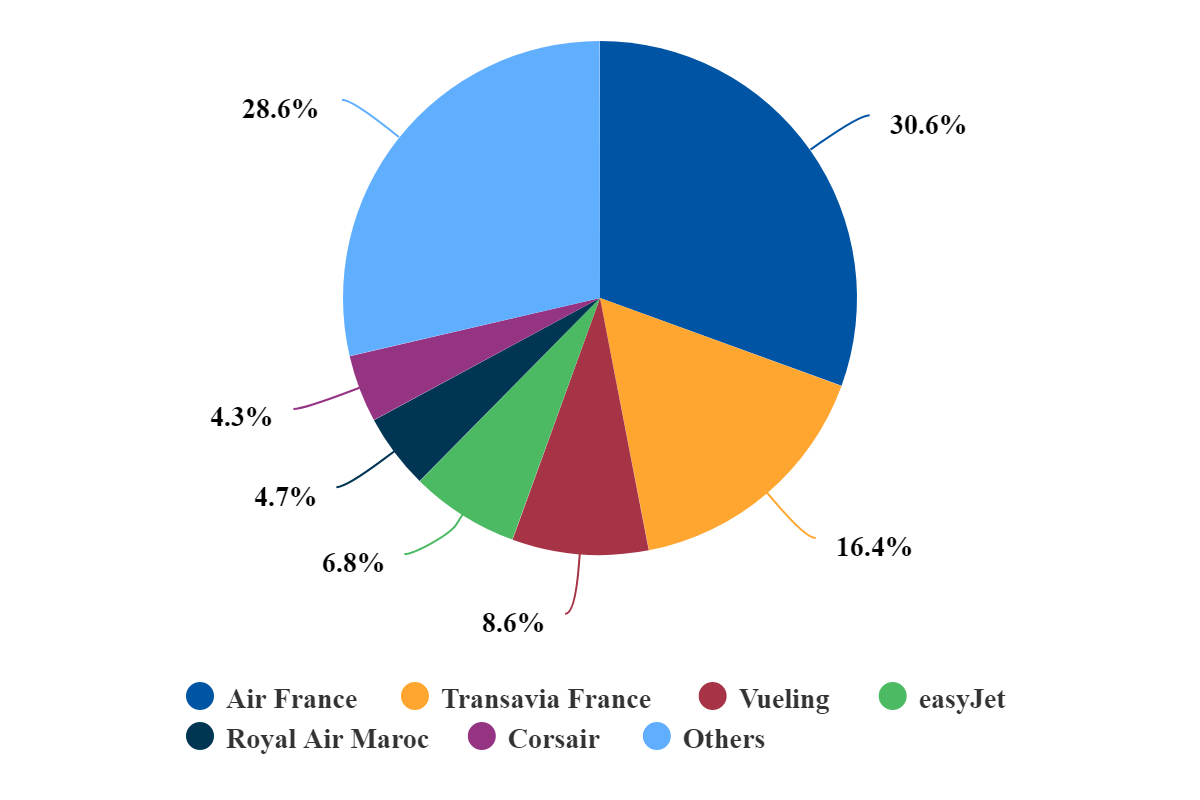 EasyJet, the number two airline at CDG, has led the charge, but Air France remains comfortably the leading operator with 49.4% of seats in the week of 9-Jul-2018 versus easyJet's 6.4%.

Delta, Air France's partner in SkyTeam and the North Atlantic JV, is number three, followed by fourth placed Vueling, which strongly increased its presence at CDG in summer 2016.

Norwegian, which only entered CDG in summer 2016, is now the airport's sixth largest airline (after Lufthansa, which has reduced its capacity at CDG over the past five years). 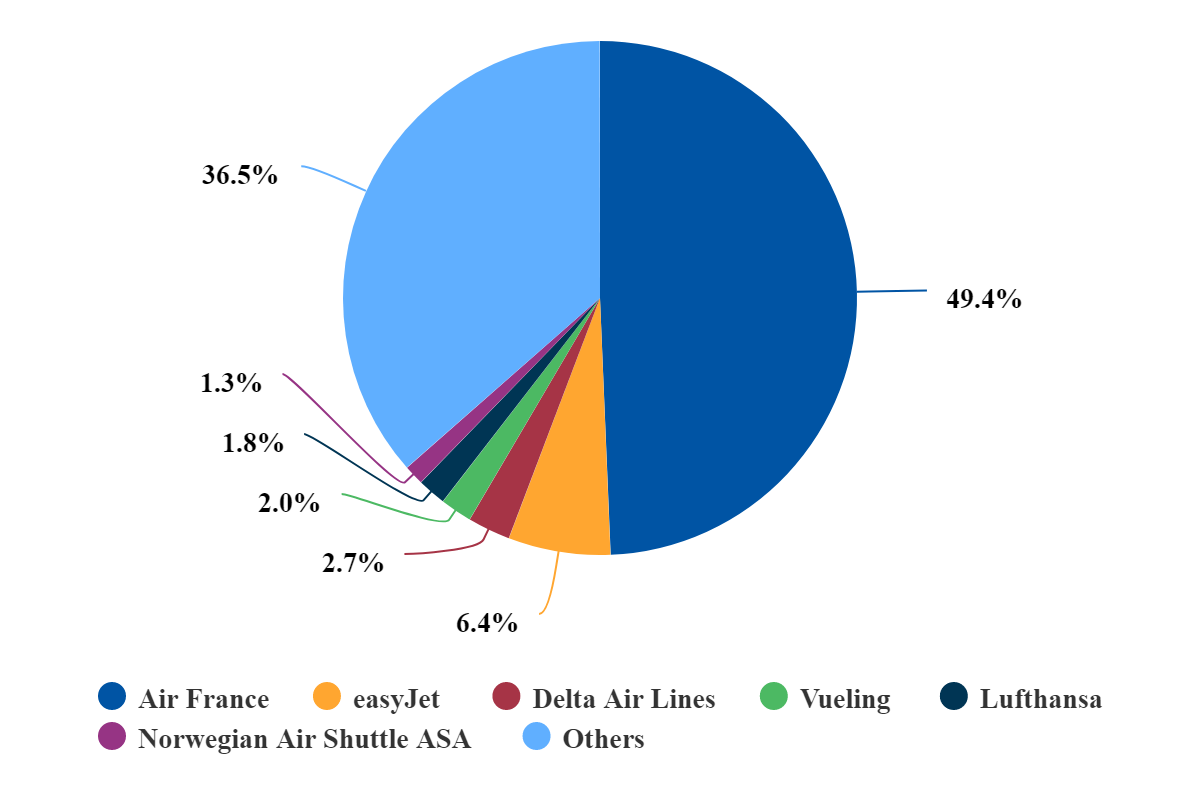 Paris Orly: number of routes is falling in summer 2017

The reduction by seven this summer is the net impact of five new routes and 12 route closures (see tables below).

Established in 2017 with routes from Barcelona to Boston, Los Angeles and Oakland in response to Norwegian's plans to launch long haul routes from Vueling's biggest base, Level will start operations at Orly in Jul-2018 with services to Montreal and Pointe-à-Pitre (Guadeloupe) and, in Sep-2018, to Fort de France (Martinique) and New York Newark.

On Orly-Newark, Level is taking over from British Airways' OpenSkies subsidiary. It will compete with Norwegian's service launched earlier this year and with La Compagnie, which recently switched its service from CDG (La Compagnie argues that Orly is "closer to the capital's major decision making centres").

The total number of routes at Paris CDG is up by nine to 277 this summer, which is 45 more than in summer 2012. The increase this summer reflects the launch of 17 new routes and the suspension of eight (see tables below).

Among the new routes at CDG this summer, highlights include four new long haul low cost routes: Norwegian's three new US services to Denver, Oakland and Orlando, and Westjet's new service to Halifax.

Norwegian is the only operator on these new US services on the basis of airport pairs, but its CDG-Oakland route competes with services from CDG to San Francisco operated by Air France, United and XL Airways, and with French Bee's new Orly-San Francisco operation.

Norwegian is also launching CDG-Boston this summer, but this is not a new route for the airport, being already operated by Air France and Delta.

Other highlights include the launch of Chennai by Jet Airways (started last winter), Indianapolis by Delta, and the north Atlantic island airport of Saint Pierre by Air Saint Pierre.

In an apparent challenge to low cost airlines, Air France is launching a Paris CDG to Wroclaw service, a destination already served by both Ryanair and Wizz Air from BVA.

Joon is taking some of Air France's traffic at CDG

Joon, the new millennials-targeted, lower cost subsidiary of Air France, launches services to Fortaleza and Seychelles (previously operated by Air Seychelles) in May-2018 and also takes over its parent's services to Mumbai (from 18-Jun-2018), Cape Town (from 3-Apr-2018).

All of Joon's flights operate under the AF code. The unit cost targets set for Joon by Air France imply a CASK similar to that of KLM - certainly more cost efficient than Air France, but not low cost.

In addition to direct long haul low cost services from CDG operated by Norwegian and WestJet, the Icelandic LCC WOW air has operated between CDG and Reykjavik since 2013.

The Nordic low cost operator Primera Air also plans to establish a base at Paris CDG, from where it expects to become another low cost long haul operator with services to New York, Boston and Toronto deploying narrowbody A320neo family aircraft.

It is also planning short haul routes, including a six times weekly Malaga service. It had hoped to launch its trans-Atlantic Paris routes this summer, but this has been delayed due to Airbus delivery delays.

Air France may suffer further erosion in its market share

Air France remains significantly the biggest airline presence in Paris, with almost 42% of seats in the week of 9-Jul-2018 (note that this seat share includes Joon). However, this has fallen from nearly 49% in the same week of 2012.

As noted above, low cost airlines have grown their share in Paris and although this is partly due to Transavia's expansion, competitors such as easyJet and Vueling have also grown. Norwegian had almost no presence in Jul-2012, but it has 1% of seats in Jul-2018.

The Paris aviation market is enjoying an increased level of dynamism but its leading airline, Air France, may suffer further erosion in its market share.