Europe’s LCCs have been slow to take up the opportunities created by the Dec-2010 Jordan-EU Open Skies agreement, undoubtedly owing to the Arab spring that has dented demand for travel to the country. easyJet was the first European budget carrier to launch scheduled services to the Hashemite Kingdom of Jordan. Competitors including Ryanair and Norwegian have not followed suit. This comes with the upside that Jordan’s flag carrier Royal Jordanian has been able to maintain its market share in a very adverse environment.

Europe inked a similar agreement with Morocco in Dec-2006 and Europe’s LCCs are now overwhelmingly present in the EU to Morocco market. The international LCC market share in Morocco has more than tripled from 12.4% in 2006 to 39.7% in 2011, and no-frills airlines already dominate the market between Western European and Morocco at present. Israel will be the next region to watch with the EU agreeing with the country to expand to it the common aviation market.

Scheduled air transport between Morocco and EU member states that have traditionally strong leisure and ethnic traffic flows to the North African country has become the near sole playground of budget carriers. For example, LCCs account for more than 75% of all seats offered between Belgium and Morocco in the week of 11-Jun-2012 to 17-Jun-2012 leaving Morocco’s flag carrier RAM Royal Air Maroc with a 20% share and Brussels Airlines a mere 2%.

Jetairfly, which is in the process of fully integrating the operations of its Moroccan sister airline Jet4You, flies 36% of all seats between Belgium and Morocco, Ryanair offers 29% of weekly seat capacity between the two countries and Air Arabia Maroc 13%. Jetairfly will further increase its market power with the launch of a new twice weekly service form Brussels Airport to Rabat on 23-Jun-2012. Rabat is the airline’s 10th destination in Morocco. It currently flies Brussels to Agadir, Marrakech, Casablanca, Fez and Tangier. The carrier are also offers flights from Charleroi airport to Al Hoceima, Casablanca, Fez, Nador, Oujda and Tangier, and from Liege to Tetouan.

In France the situation is slightly less extreme, with full service carriers RAM and Air France holding on to respective 42% and 12% shares, but 46% of seat capacity is operated by budget carriers. LCC presence in the France to Morocco market (easyJet is a UK airline, Ryanair flies under an Irish AOC and Jetairfly is registered in Belgium) reflects the nature of the EU-Morocco Open Skies, which replaced the bilateral country-to-country core of the traditional Air Services Agreements with a full liberalisation of respective market access between Morocco and all EU member states. All EU airlines are allowed to serve any point in Morocco from anywhere in the EU, and vice versa for Moroccan carriers, without restrictions on fares, routes and numbers of flights.

The EU-Jordan and EU-Morocco are very different markets. There is not large Jordan ethnic population in the EU and tourism infrastructure is less developed than in Morocco. Additionally, longer flight distances from the EU to Jordan compared to Morocco limit similar growth. While Jordan and Morocco are not comparable, the explosive growth of air services by LCCs and consequent rise in tourist arrivals is what Jordan’s Government had in mind when it agreed to Open Skies discussions with the EU.

Jordan has a lack of natural resources and boosting tourism to create employment and stimulate GDP growth is a rational option for a country with a rich cultural heritage. The global economic slowdown and regional turmoil, however, have stalled the anticipated or expected benefits of the liberalised market access with the EU. 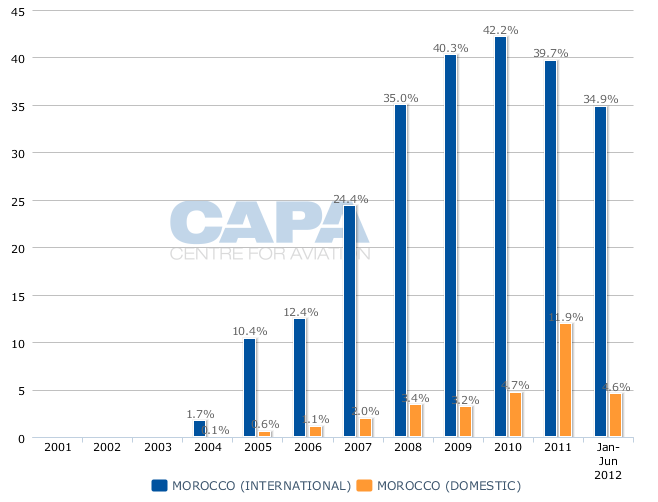 Royal Jordanian has been spared from increased competition, but the European market is shrinking

The comprehensive air services agreement with the EU calls for the integration of Jordan in the EU’s Common Aviation Area (CAA) or Open Aviation Area. The implementation of the agreement will be gradual and Jordan will apply regulatory requirements and standards equivalent to EU aviation rules in areas such as aviation safety, environment and consumer protection, including passenger rights, air traffic management, economic regulation, competition issues and social aspects.

Royal Jordanian has always pointed out to the Jordanian Government, albeit without success, that the agreement is unbalanced. There are approximately 150 EU-registered airlines yet there are fewer than 10 in Jordan, of which all but Royal Jordanian are quite small. In addition, the agreement does not come with access to slots: Amman Queen Alia Airport has no shortage of slots but Royal Jordanian cannot get the right and/or sufficient slots at London Heathrow and Frankfurt. Here Jordan has taken Morocco's stance on liberalisation: growth, even if at the expense of local carriers, has higher economic benefits for the country than protecting local carriers.

Europe is an important market for Royal Jordanian. It deploys almost 20% of its weekly seat capacity to the continent and scheduled flights to/from Europe represented 21% of the carrier’s revenue in 1Q2012. But sales in Europe have been declining owing to the political turmoil in the Levant region and the Eurozone crisis. In 1Q2011 Royal Jordanian reported revenue arising from scheduled flight operations to/from Europe in the amount of JOD26.2 million (EUR29.2 million), equating to 26% of scheduled revenue. In 1Q2012 this had fallen 9% to JOD23.9 million (EUR26.7 million). Overall, however, Royal Jordanian is loss-making. 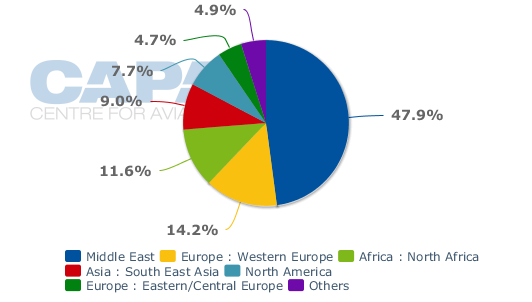 Despite the Open Skies agreement Europe’s LCCs have not yet ventured into Jordan. So far, only easyJet operates to the country with a thrice weekly London Gatwick–Amman service. The LCC now has 12.6% share of the weekly seat capacity offered between the UK and Jordan, according to Innovata. Royal Jordanian deploys 42.9% of the seat capacity and the British Airways/bmi combination the remainder.

Royal Jordanian does not face LCC competition in any other EU market and competition thus is limited to its fellow flag carriers. On several routes from Amman to the EU Royal Jordanian faces no competition at all. It is the sole operator from Amman to Athens, Amsterdam, Barcelona El Prat, Berlin Tegel, Geneva, Zurich, Madrid Barajas, Munich and Milan Malpensa.  It competes with Cyprus Airways on the route to Larnaca, with Austrian Airlines on the route to Vienna, with Alitalia on the route to Rome Fiumicino, with Air France to Paris Charles de Gaulle, with Lufthansa to Frankfurt and with BA/bmi to London Heathrow. Amman to Bucharest is operated by TAROM.

Only one of Royal Jordanian’s ten largest international routes (in terms of seats capacity per week) is to a European airport, London Heathrow. 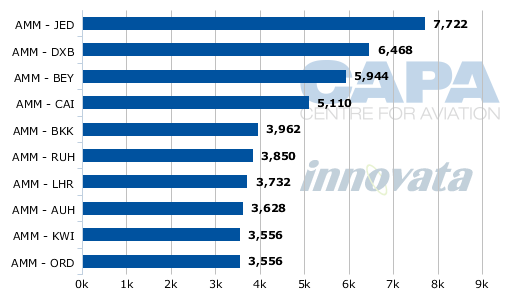 The Open Skies with the EU could potentially diminish Royal Jordanian’s share in this market, but it deploys the bulk of its capacity in terms of seats to the Middle East and regional LCCs are more a threat than European LCCs. Flydubai, Air Arabia and Air Arabia Egypt operate to Amman. Air Arabia has put its plans to establish Air Arabia Jordan on ice due to the political unrest, but these plans are expected to be revived when the operating environment becomes more accommodating. Air Arabia has a history of pushing back the launch of its cross-border JVs; the launch of its Morocco operation suffered delays of almost 12 months due to a number of difficulties, and its Air Arabia Egypt operation was delayed several times.

LCCs in the region have a relative low market penetration, but it is steadily growing. Budget carriers had 2.7% of the market to/from the Middle East and 8.6% in the first six months of 2012. Royal Jordanian still has a comfortable 55.4% share of the Jordanian air transport market in terms of weekly seat capacity. 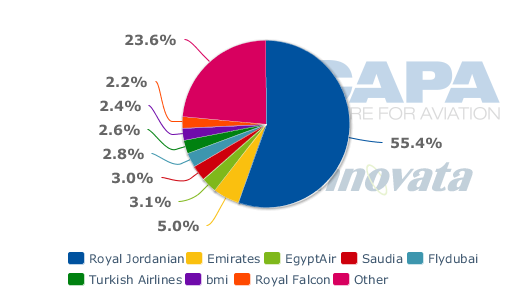 Europe has ambitious plan to establish a wider CAA, including with Israel

The EU has the ambition to stretch out the CAA to include the EU’s neighbouring countries as well as a number of countries in the Mediterranean region with strong economic, cultural and historical links with the Community.  Most recent additions to the CAA are Moldova and Israel while candidates for future inclusion are Tunisia, Ukraine, Azerbaijan and Lebanon. The EU would also like to include, among others, Turkey and Russia but the latter has strongly resisted the idea and even is refusing to incorporate the EU designation in its ASAs with the EU member states. A comprehensive aviation agreement has also been negotiated with the Western Balkan countries and Georgia.

Following eight rounds of negotiations since Dec-2008, Israel and the European Union agreed on 22-Mar-2012 to gradually develop a common aviation area between Israel and the EU.

The European Commission said in a statement that “based on the experience of similar agreements signed with other EU neighbouring countries, the gradual opening of the market is expected to encourage a larger number of direct flights from Israel to more destinations in Europe at lower prices than today while also reducing flight prices to Israel for European travellers. Higher volumes of tourism in both directions are expected to create additional jobs and economic benefits on both sides. The gradual implementation of the agreement will give sufficient time for carriers on both sides to prepare for increased competition.” The deal would be implemented over the course of five years.

The EU is the most important aviation market for Israel, accounting for 57% of scheduled international air passenger movements to and from Israel. There are scheduled direct passenger flight connections between Israel and 16 EU member states (Austria, Belgium, Bulgaria, Cyprus, Czech Republic, France, Germany, Greece, Hungary, Italy, Latvia, The Netherlands, Poland, Romania, Spain and the United Kingdom). 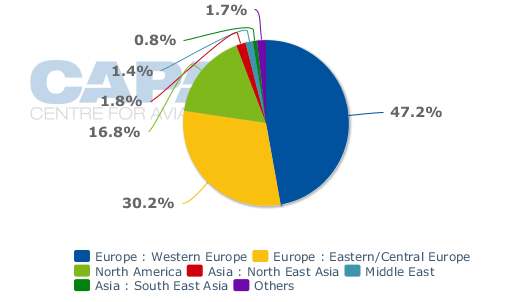 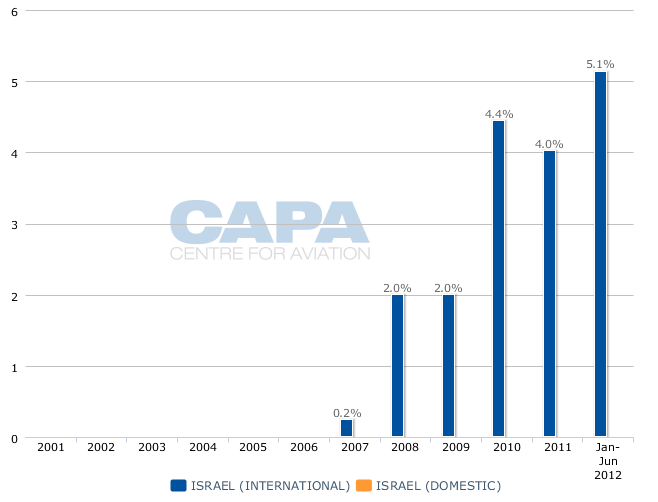 Flag carriers often resist the opening of their markets as this may lead to a loss of market share, and potentially weaken their viability and profitability. For governments in developing nations seek the right balance between defending the interest of the – often loss-making – national carrier and defending the interests of the local economy.