2011 was not an easy year for Royal Jordanian. After its net profit dropped by two thirds in 2010, the airline had been anticipating a year of modest profit in 2011. However, the regional unrest across the Middle East and North Africa, as well as the European economic downturn and the increasing price of fuel, struck the carrier a hard blow in the year.

Over the year, the carrier suffered four consecutive quarterly losses. It reported a full year loss of JOD57.8 million (USD81.4 million). This is its heaviest ever annual loss, more than wiping out the profits Royal Jordanian managed to make in 2009 and 2010.

The airline temporarily halted services to Libya, Iraq, Iran and Egypt during the early months of 2011, although the unrest cut revenues by just 2% according to CEO Hussein Dabbas. European traffic was affected given the continent’s general economic weakness. 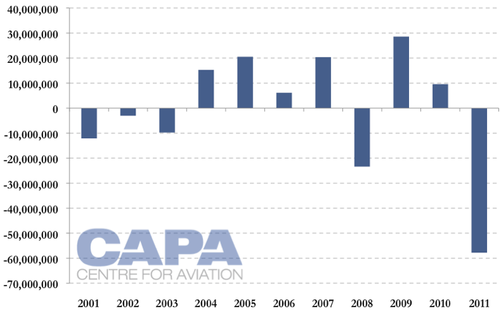 The Jordanian Tourism Ministry estimated earlier this year that the Arab Spring cost Jordan’s tourism industry more than USD1 billion in lost revenue in 2011. Royal Jordanian was forced to cancel more than 1300 flights over 2011.

Despite the unsettled conditions, Royal Jordanian was still able to report some positives during the year. Overall passenger traffic rose 6.5% in the year, to around 3.2 million. Growth was notably stronger in 2H2011, a trend that has continued into 2012. 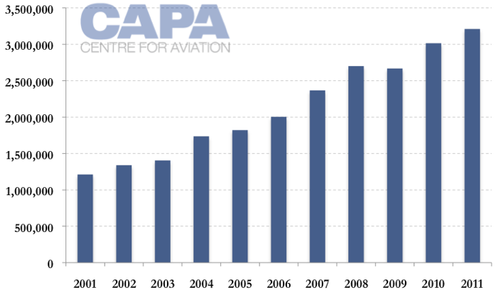 While traffic grew, yields declined in several key tourism markets. With unrest in key tourism and business markets including Egypt, Bahrain, Syria, Sudan, Yemen, Libya and Tunisia, Royal Jordanian sought to deployed capacity away to other sectors. However, other regional carriers followed a similar path, intensifying competition and dropping fares and load factors.

Revenues at the carrier were reportedly 6% up on 2010 levels, increasing to approximately JOD726 million (USD1 billion). 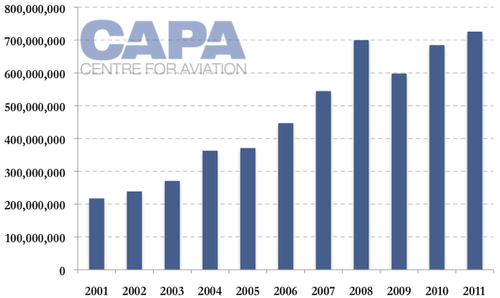 Despite the increase in traffic, revenues from scheduled passenger and cargo operations were flat during the year. Much of the revenue increase at the carrier was due to substantially higher fuel surcharges, which Royal Jordanian has been forced to levy to combat the higher price of oil. 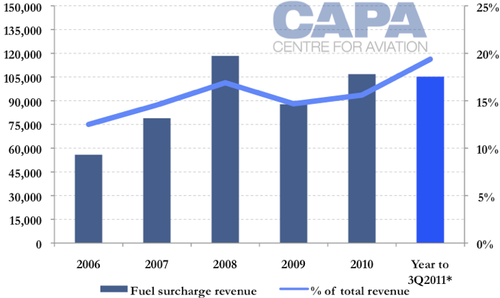 Fuel prices have now risen to more than 40% of Royal Jordanian’s total costs and are one of the most serious concerns for the airline. Fuel costs for the year to Oct-2011 were up 46.2% year-on-year and were cited by Mr Dabbas as preventing the carrier from being profitable.

Royal Jordanian abandoned fuel hedging at the end of 2008, after it took a JOD46.7 million (USD65.9 million) charge during the year related to unrealised fuel hedges.

Renewed instability in the regional political climate and the global economic climate pose another risk to the carrier’s bottom line in 2012. The airline has cancelled 460 services over the first two months of 2012 alone.

In late Feb-2012, Royal Jordanian announced it would conduct a major prune of its route network, to be carried out over March and April. The airline plans to suspend its operations to Brussels, Munich and Al Ain. It will also cut services to another two undisclosed Gulf region routes later in the year.

In addition to these, the carrier will reduce frequencies on seven routes: Rome, Vienna, Zurich, Geneva, Amsterdam, Kuala Lumpur and Khartoum. Where or if the additional capacity will be deployed has not yet been announced. If conditions in the region improve, the carrier will consider restoring some of the routes and capacity, according to Mr Dabbas.

Also looming large for the airline is the possibility of a suspension of services to Syria. Syria is an important part of Royal Jordanian’s network, with the carrier operating twice daily services to both Damascus and Aleppo. Its only competition on services between Jordan and Syria is Sudan Airways, which operates a twice weekly Aden-Amman-Damascus service.

Some airlines are already cutting back or cancelling operations to Syria. Air France has already cancelled its service to Damascus and Kuwait Airways has cut its frequencies into Syria from 18 to six times weekly, redeploying the capacity into Jeddah, Dubai and Cairo.

Cuts to key regional markets for security reasons have already had a dramatic impact on some regional carriers, notably Gulf Air, which has suffered heavily due to the ban on services to Iran and Iraq and which is also cutting back on routes into Europe and Asia.

Some promise in rising traffic but costs the key

Cargo uplift reported a similar increase, up 24% year-on-year in January.

However, Mr Dabbas has warned that the Middle East region is still suffering from a decline in travel, especially from Europe and Asia, partially due to the events taking place in Syria. Fuel prices are a constant concern: Jan-2012 fuel costs at Royal Jordanian were up 30% year-on-year, helping to push overall operating costs up by 17%.

In spite of the stronger traffic, the regional unrest and general competitive pressures mean that Royal Jordanian is unable to increase yield and revenues in parallel with its rising costs. This round of route cuts could be followed by more reductions, as the carrier seeks to cut its costs. Royal Jordanian is also taking steps to reduce capital expenditure and has frozen staff expansion, in favour of increased productivity and service enhancement.