Forced out of Iran and Iraq, Gulf Air looks to Saudi market

Bahrain’s national carrier Gulf Air has extended its suspension of flights to Iran and Iraq, citing the “ongoing security situation” as prompting the decision. Gulf Air was forced to terminate services to Iran, Iraq and Lebanon in mid Mar-2011, due to security and political considerations relating to the Arab Spring uprising, which spread across much of North Africa and the Middle East over late 2010 and the first half of 2011.

The suspension for destinations in Iraq will continue to 31-Jan-2012 inclusive, while the suspension of services to Iran will stretch until and including 31-Mar-2012. At the time of the suspensions, Iran and Iraq were two of Gulf Air’s largest markets. The carrier operated four routes to Iran – Tehran, Mashad, Esfahan and Shiraz – and four to Iraq – Baghdad, Najaf, Erbil and Basra.

Gulf Air resumed operations to Iraq in 2009, with Erbil, Najaf and Baghdad services all launched over 2H2009. Gulf Air added Basra service on 03-Mar-2011, only two weeks prior to the enforced suspension.

Gulf Air has had three Iranian destinations since it added Mashhad service in 2003. Its fourth route to Isfahan was added only in Jan-2011. At the time of the launch, Gulf Air was the only foreign carrier to offer scheduled services to the airport.

Since the ban, Gulf Air has resumed flights to Beirut in Jun-2011, as leaders on both sides patched up the political relationship between Bahrain and Lebanon.

Gulf Air CEO Samar Majali told Gulf News that the loss of the routes into Iraq and Iran have hurt the carrier deeply and carriers have moved to take advantage of Gulf Air’s absence. While Gulf Air has been able to redeploy capacity to other sectors, these have not proven as profitable as the routes into Iran and Iraq, which are still underserved.

Gulf Air had invested heavily in developing its presence in Iran and Iraq. Iran in particular was a strong market for the carrier.

Aviation in Iran suffers heavily from long-running sanctions put in place by the US, banning the sale of aircraft or spare parts with US-manufactured content to the country, effectively preventing Iran from replacing the country’s ageing commercial aircraft fleet and raising safety concerns. The sanctions not only apply to Boeing, but Airbus, Bombardier and Embraer as well, as their aircraft feature a high proportion of content developed or manufactured in the US. The sanctions have recently been expanded in scope to include specific measures targeting private Iranian carriers such as Mahan Air.

The sanctions have also made operations to Europe more difficult. Airport refuelling companies with ties to the US have reportedly refused to refuel Iranian aircraft at a number of European airports. In return, the Iranian Government in late 2011 stopped providing fuel to European airlines. The European Commission also placed restrictions on Iran Air, banning more than half its fleet from European airspace due to safety concerns.

The largest foreign carrier into Iran is presently Emirates, which operates to Tehran 24 times per week. Turkish Airlines also has a strong presence in the Iranian market, with services to Mashhad, Tehran, Tabriz and Shiraz. Qatar Airways and Lufthansa also have strong operations into Iran, although Lufthansa’s operations have been somewhat affected by the refuelling ban, with the carrier forced to carry enough fuel for both Frankfurt to Tehran and Tehran to Frankfurt legs. 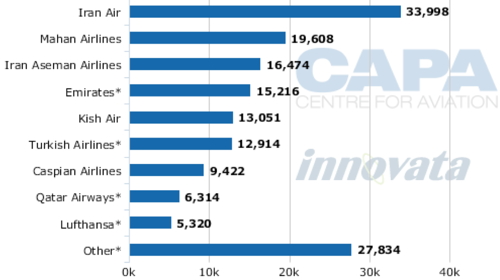 Qatar Airways in particular has looked to exploit the underserved Iranian market since Gulf Air’s departure. Qatar added service to Shiraz in Jun-2011 and announced in late Oct-2011 that it would conduct a massive increase of capacity across its network in Iran, including the launch of daily scheduled flights to Isfahan, its fourth destination in the country.

The capacity expansion will continue through to Mar-2012, ultimately expanding Qatar Airway’s operations into Iran 52 weekly frequencies, an increase in its overall frequency into the country by 150%.

Qatar Airways has also reportedly signed a codeshare agreement with Iran Air, which will allow the carrier to operate domestic services within Iran. The Iranian Road and Urban Development Ministry confirmed an agreement has been signed, but more details have not been forthcoming. The deal provides domestic services in the face of sanctions.

Iraq opening up to European and Middle East carriers

Middle Eastern and European carriers have also expanded their operations into Iraq, taking advantage of a slightly more stable environment and the weakness of the local aviation sector, as national carrier Iraqi Airways undergoes a rebuilding process.

The carrier is slowly expanding its network, focussing primarily on regional routes with only limited operations into Europe. It is integrating CRJ900 regional jets into its fleet, with deliveries of new Boeing 737-800s to start this year. However, progress is threatened by an ongoing dispute with Kuwait Airways, which is claiming approximately USD1.2 billion in damages related to the 1990 Iraqi invasion of Kuwait and is pursuing legal action and asset freezes.

Iraqi Airways in Apr-2009 attempted to restore links to London but greeting the arrival of the first flight was a lawyer for Kuwait Airways who had an Iraqi Airways’ executive’s passport seized by the UK Government owing to the asset dispute. The lawyer also tried to have Iraqi Airways’ aircraft confiscated, but could not since the aircraft was owned by a leasing company and not Iraqi Airways. Iraq subsequently said it would dissolve the carrier to end the dispute, although Kuwait said it would pursue the Iraqi Government for funds owned.

Despite a clear direction from its national carrier, Iraq will also be linked with European carriers, many of whom have launched new routes or expanded their operations into Iraq over the past six months. Turkish Airlines is the largest foreign carrier into the country, having received permission in late 2010 to operate from Istanbul to Baghdad, Erbil, Sulaimaniyah, Basra, Mosul and Najaf, with a combined total of up to 36 weekly frequencies. Pegasus Airlines, Viking Hellas, Austrian Airlines and Lufthansa have also added capacity and/or new routes into Iraq.

Concentrating on the Saudi market to make up for the elsewhere

The Saudi market is now the cornerstone of Gulf Air’s Middle East regional network. The airline operates to four destinations in the country – Dammam, Jeddah, Medina, Riyadh – making Saudi Arabia its largest regional market by destinations and second largest by seat volume, after the UAE. Mr Majali, speaking to Gulf News at the beginning of this year, said that Saudi Arabia “remains the only major market available to us in our region until the suspension of the other markets is lifted”.

Apart from the route cancellations into Iran and Iraq, Gulf Air’s traffic was also affected by the temporary closure of the King Fahad Causeway during the Arab Spring. The causeway spans the strait between Bahrain and Saudi Arabia and provides easy access to/from eastern Saudi Arabia, handling more than 20 million vehicles p/a, some of which fly out of Bahrain. 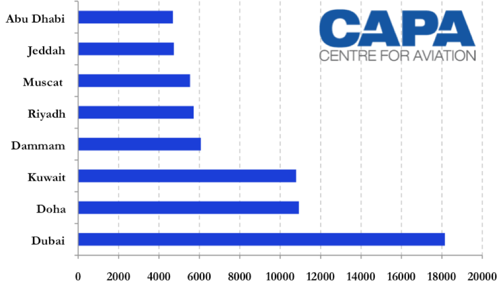 To boost operations into Saudi Arabia further, Gulf Air plans to add three new destinations – Gassim, Taif and Yanbu – in the country over 1Q2012. This will increase its operations by 10 frequencies and add more than 2100 seats per week into its Saudi Arabian services.

Even with the additions, other Gulf-region rival carriers will have stronger market shares to/from Saudi Arabia, notably Emirates, Qatar Airways and Flydubai, not to mention Saudi Arabian Airlines’ dominant market position. Local Saudi LCC NAS air is concentrating on international expansion, although it has made no mention of adding a route to Bahrain. 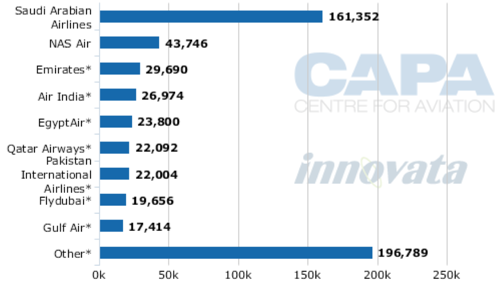 Gulf Air is looking to build its strength in the Saudi market to increase the number of destinations it seamlessly connects with the rest of the Middle East, thanks to its high-frequency operations from Bahrain. Gulf Air operates a mix of E170 and E190 regional jets and A319/A320 narrowbodies into Saudi Arabia and is aiming to provide convenient connection times for business and O&D traffic to feed into the rest of its regional network.

Source: CAPA – Centre for Aviation & Innovata
*To be launched over 1Q2012

At present Gulf Air operates 60 weekly frequencies into Saudi Arabia, increasing to 70 once its three new routes are launched. Only Qatar Airways, which operates a mix of A320 narrowbody and A330 and 777 widebody equipment into the country, can match this level of frequency. Etihad Airways operates 39 frequencies – 13 times weekly to three destinations, also with a mix of widebody and narrowbody equipment. Emirates, in contrast, operates nothing but widebodies into Saudi Arabia, including 494-seat A380 operations twice daily on Dubai-Jeddah service, one of the few short-haul A380 services.

An element that further clouds the picture on the future of the Saudi market is how the Saudi Arabian General Civil Aviation Authority (GCAA) plans to proceed with the opening of the domestic market to foreign carriers, a move it formally announced in late Dec-2011. The GCAA has decided that Saudi Arabian Airlines and NAS air alone are not meeting the demands of the domestic market, and fresh licences will be opened to local and international investors and airlines. Tender details are due to be announced by the GCAA in late Jan-2012.

The Arab Spring was disastrous for an already suffering Gulf Air and its effects are lingering more than 12 months on. Apart from the effect the local political and social turmoil had on its operations and the cancellation of Iraq, Iran and Lebanon services, the uprisings lead to a rolling series of temporary service disruptions across the carrier’s network for much of 2011.

The result of the local civil unrest and enforced route suspensions has been a major downturn in passenger traffic for Gulf Air. Bookings at the airline slumped nearly 30% over the first five months of 2011, and traffic has still not fully recovered, although it is gradually returning to normal.

Passenger numbers through Bahrain International Airport were down almost 1.1 million for the first 11 months of 2011. While traffic was most heavily affected between February and May, passenger numbers since Jun-2011 are still down 9.4% compared to the same period in 2010. 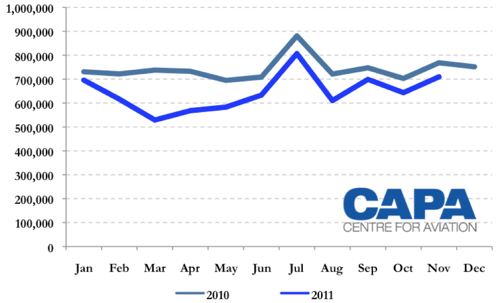 The result is that Gulf Air’s three-year financial recovery strategy has been thrown into disarray. After combined losses of more than USD1 billion over the past three years, the carrier hoped 2011 would see decisive progress in reducing losses. It was expected that losses would be almost eliminated by the end of 2012, with profit returning from early 2013. Now breakeven is not anticipated until late 2013.

To help relieve its financial burdens, Gulf Air received a BHD400 million (USD1.1 billion) loan from the Bahrain Government in May-2011, allowing Gulf Air to settle outstanding debts, clear loan payments, make instalments on aircraft payments and invest in its restructuring plans. With the support of the Bahrain Government, 2012 will be another year of recovery for the carrier, putting 2011 behind it and getting back on track with its financial turn-around.