Germany is Italy's biggest aviation market and Germany-Italy is Europe's number four country pair by seat numbers. Lufthansa Group companies, led by Lufthansa and supported by the fast growing LCC subsidiary Eurowings and Italian regional subsidiary Air Dolomiti, dominate Germany-Italy. The group has a 62% seat share in the year to Sep-2018, compared with 20% for Ryanair and 9% for easyJet.

The gap left by airberlin's collapse and exit can be likened to that left by a hand withdrawn from a bucket of water. Other operators have immediately closed in around the space and airberlin's 10% seat share of last year has not been missed. Easyjet and Lufthansa, through Eurowings, are the main beneficiaries, while Condor is also growing rapidly on Germany-Italy routes.

Relative to the rapid growth of these operators, Ryanair is taking something of a pause for breath in this market this year, perhaps waiting to see what happens to Alitalia. Italy's national airline has only 4% of seats on Germany-Italy, suggesting that Lufthansa's interest in bidding for it is of only minimal importance to the German group.

Germany-Italy is Europe's number four country pair by annual seats after UK-Spain, Germany-Spain and Germany-UK. Italy is Germany's third biggest international market (after Spain and the UK), and Germany is Italy's biggest market.

The demise of airberlin in late Oct-2017 caused a slowing of seat growth on Germany-Italy, from 7.8% in 2016 to 2.4% in 2017. In 2018, seat numbers look set to slide backwards by approximately 1%, but this small decline indicates the robustness of this market, given the loss of what was the number three operator.

As with UK-Spain and Germany-Spain, the Germany-Italy market does not have balanced flows. German tourist visitors to Italy vastly outnumber those travelling in the other direction.

Germany is the biggest source of tourist arrivals in Italy, with 10.8 million visitors in 2015, a share of 20% (according to data from Italy's National Tourism Agency).

By contrast, in 2017 there were only 1.7 million tourist visitors from Italy to Germany (only the seventh largest source, according to Germany Destatis).

Germany-Italy 2012 to 2017: growth in seats, airports, airlines and routes

The growth in seats on Germany-Italy between 2012 and 2017 can be further analysed by the number of airports, airlines and routes.

Germany-Italy 2017 to 2018: decline in number of seats and airlines; growth in airports and routes

However, OAG data for summer 2018 indicate that the week of 24-Sep-2018 (the seasonal peak week for this country pair) will witness a 1.6% year-on-year drop in seat capacity in the Germany-Italy market and a fall in the number of airlines from 15 to 12.

The number of routes between Germany and Italy will increase by 11, from 156 to 167.

The decrease in German airport numbers from 2012 to 2017 was due to the exit of Friedrichshafen and Hamburg Luebeck, while the increase in 2018 is due to the entry of Dresden and Rostock Laage, taking the total back to 18.

Between Sep-2012 and Sep-2018 Frankfurt will have added nine more routes to Italy, a bigger increase than any other airport, followed by Hamburg, with a gain of eight routes. Berlin Schoenefeld's Italy network will have six more destinations this summer versus 2012, and Cologne/Bonn's gain will be four. 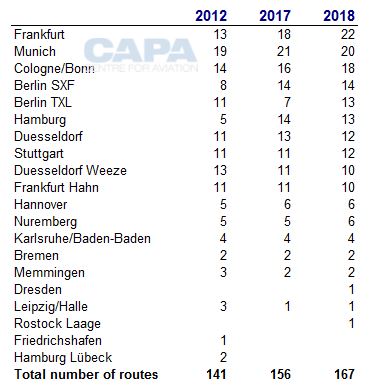 From 2012 to 2017 the number of Italian airports with direct links to Germany increased by two, thanks to the entry of Rome Ciampino and Comiso. In summer 2018 the addition of Perugia (with a Frankfurt service launched by Ryanair) takes the total up by one more, to 28.

Lamezia Terme has the highest number of direct links to Germany (13), followed by services from Bari (12), Cagliari, Naples and Olbia (11 each), and Catania (10).

Rome Ciampino will have six more destinations in Germany in Sep-2018 compared with Sep-2012, while Lamezia Terme's Germany network will be larger by five destinations. Bari, Cagliari and Trieste each have four more German routes than in summer 2012. Rome Fiumicino has lost eight.

The list of Italian airports is strongly skewed towards leisure destinations, reflecting a key dynamic of the Germany-Italy market.

Italy's two biggest airports overall are Rome Fiumicino and Milan Malpensa, which are less purely focused on leisure traffic, but are only 12th and eighth respectively by number of routes to Germany. 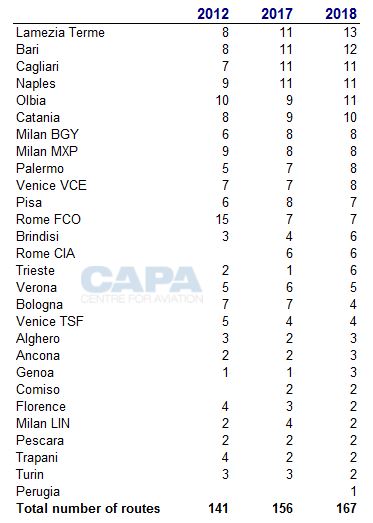 Frankfurt is the biggest airport on Germany-Italy

Frankfurt is the biggest airport by weekly seats in the Germany-Italy market, followed by Munich (based on the week of 24-Sep-2018). The two biggest Italian airports by seats in this market are Rome Fiumicino and Milan Malpensa, but they each have close to half of the seats to Germany that Frankfurt and Munich have to Italy. 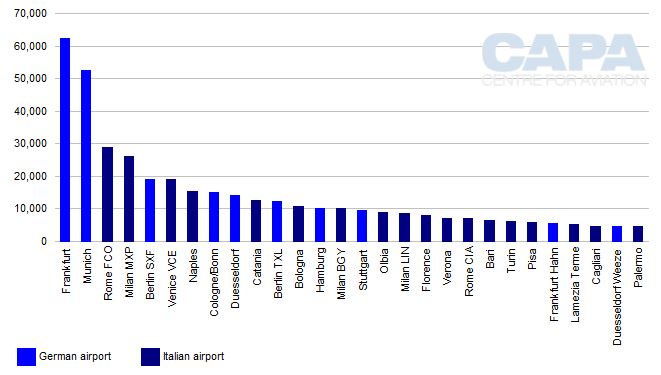 Perhaps not surprisingly, the route linking Rome Fiumicino and Frankfurt is the biggest airport pair by seats between the two countries (source: OAG, week of 24-Sep-2018).

One or other of these two airports, the biggest in each country, features in eight of the top ten Germany-Italy routes, and Germany's number two airport, Munich, features in the other two.

On the German side, only Frankfurt and Munich feature in the top 10 routes whereas on the Italian side Fiumicino, Milan Linate, Milan Malpensa, Venice Marco Polo, Florence, Naples and Bologna all feature.

Again, this highlights the mainly leisure, mainly orientated from Germany to Italy, nature of this market. 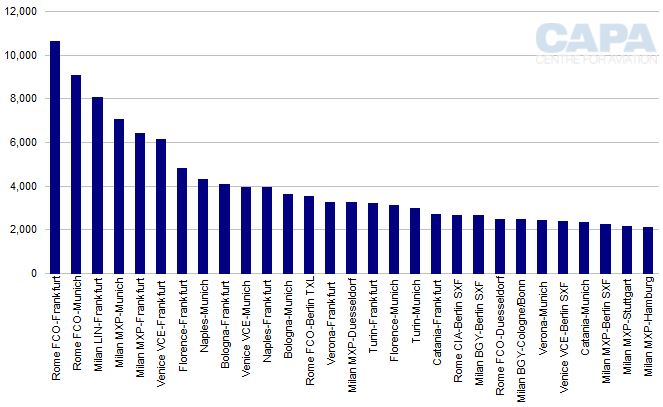 In Sep-2018, five airlines will have exited and three entered Germany-Italy

There are 12 airlines operating direct routes between Germany and Italy this summer, reduced from 15 last summer (based on the week of 24-Sep-2018 and the equivalent week of 2017).

Five airlines that operated routes in this market in Sep-2017 will not be present in Sep-2018: airberlin (which ceased operating entirely in Oct-2017), Air Italy, Transavia, Flybe and Blue Air.

Air Italy, Transavia, Flybe and Blue Air had less than 2% of seats between them last summer, but airberlin had a seat share of 11.3% and was the number three operator.

Against these exits are two additional airlines in Sep-2018: TUIfly and Germania.

In summer 2018 Germania enters on Dresden-Lamezia Terme and Erfurt-Palermo (only for two weeks in each of April and May), Saarbruecken-Pisa (only one week in May). TUIfly operates only seasonally, with short seasons, and flew Germany-Italy only in June in summer last year.

Lufthansa is the leading airline, further boosted by subsidiaries

Lufthansa is comfortably the biggest airline in this market, with 34.7% of seats in the week of 24-Sep-2018, followed by its low cost subsidiary Eurowings, which has a seat share of 18.9%. Ryanair, with 18.8%, is just behind Eurowings and easyJet is fourth, with 10.9%.

A second Lufthansa Group company, the regional airline Air Dolomiti, is fifth with 8.9%, while with just 3.4% Italy's national airline Alitalia is sixth and just ahead of Condor, which has 3.1%.

Airberlin was number three, but its exit has been absorbed

The loss of airberlin from the market has been absorbed by the growth of other airlines and the overall market has dropped by only a little more than 3,000 weekly seats, or 1.6%.

In particular, easyJet is growing by 63%, Eurowings by 14%, Lufthansa by 7%, Air Dolomiti by 20% and Condor by 187%. Ryanair's weekly seat numbers are broadly stable in the week of 24-Sep-2018 (but this summer it is growing by increasing the duration of its seasonal peak).

Germany to Italy airlines ranked by seats, week of 24-Sep-2018

The Lufthansa Group grew its capacity by 13.5% from 2012 to 2017 and will grow by 12.1% in the 12 months to Sep-2018. This current growth is mainly due to the growth of Eurowings, which has taken on significant capacity from airberlin.

Lufthansa itself cut capacity in 2013 to 2015, before stabilising. It transferred capacity first to Germanwings and then to Eurowings, while also expanding its Italian subsidiary Air Dolomiti. 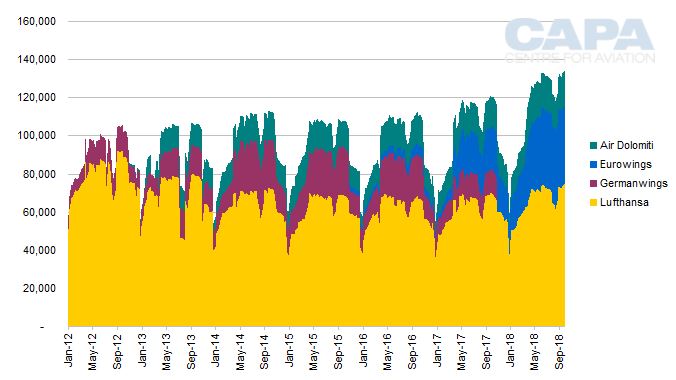 It is clear from the chart below that the Germany-Italy market has quickly absorbed the exit of airberlin. The main beneficiaries have been the Lufthansa Group and easyJet, both of which have taken on former airberlin capacity, while Condor has also seized the opportunity to grow rapidly.

Ryanair, which grew its Germany-Italy seat numbers by 66% from 2012 to 2017, is slowing its growth to a relatively modest 7% this summer.

Alitalia is cutting capacity to Germany

Alitalia grew its capacity to Germany by 146% between 2012 and 2016. Its growth mainly took place in 2015 after the airline received investment from Etihad in late 2015, which encouraged it to expand its codeshare partnership with airberlin. 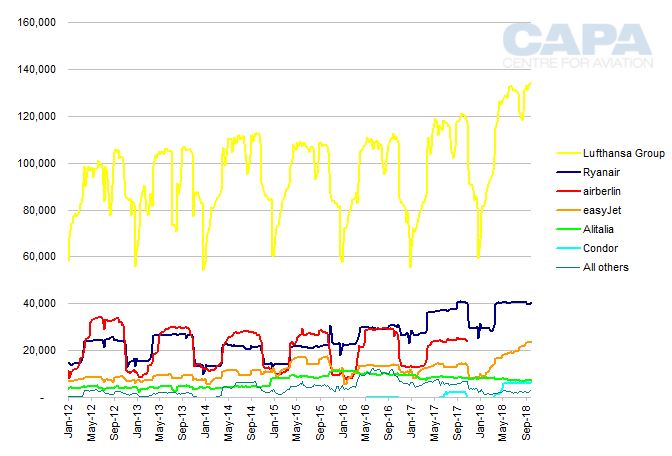 Alitalia's fate remains unknown, and Germany-Italy market structure is not settled yet

As has been seen in other markets from Germany, airberlin has not been missed in the Germany-Italy market. Lufthansa Group has boosted its already strong leading position between the two countries by taking over some of airberlin's capacity.

Germany-Italy is an important country pair and helps to explain Lufthansa's expressed interest in buying at least some parts of Alitalia from its administrators.

However, Lufthansa Group's strength in this market also suggests that it does not need to buy any of Alitalia. The disappearance of Alitalia might be a better outcome for it. Lufthansa will certainly not want to buy Alitalia without meaningful restructuring first being achieved.

EasyJet, whose position in this market has also received a boost from airberlin's demise, is also a bidder for parts of Alitalia. An acquisition could help third placed easyJet to close the gap on second placed Ryanair.

Ryanair originally expressed interest in Alitalia but withdrew any possibility of a bid to focus on its crew rostering problems last winter. Ranked second by seats on Germany-Italy, Eurowings now more or less matches Ryanair's size in this market.

Ryanair now risks falling behind Eurowings and being an even more distant second to the Lufthansa Group. Delays to the sale of Alitalia (or parts of it) may perhaps mean that a revived bid from Ryanair cannot be ruled out. Like easyJet, Ryanair would also be interested in Alitalia's seat share to other countries in Europe.

The future structure of the Germany-Italy market has not been settled yet.