In the summer of 2014, Transavia France is to add new destinations to its network from Paris Orly and also from other (regional) French airports. In addition, Transavia France will open a base at Strasbourg in Apr-2014. According to data gathered by CAPA, a total of 19 new routes from France, of which 10 are from Orly, will be launched this summer. Six of the Orly routes will utilise A320s leased from Air France.

However, this development does not represent a transfer of routes from Air France to Transavia (as, for example, Lufthansa is doing with its LCC Germanwings). This returns the spotlight on Air France-KLM’s plans for Transavia and on the contrasting ways in which Europe’s Big Three legacy groups are using their LCC subsidiaries in the short/medium-haul markets. With pan-European LCC Vueling and hub feeder Iberia Express in its stable, IAG would seem to have the most comprehensive approach of the three.

The 19 new routes compare with a total of more than 100 routes for Transavia as a whole (both the Netherlands and France operations). Looking through the new Transavia France routes, only on Paris Orly-Pisa, which was previously operated by Air France, does it look like a straight transfer from it to Transavia. There are 11 routes that are not currently operated by any Air France-KLM Group company and seven routes where Air France will continue to operate alongside Transavia (treating routes as city pairs, not just airport pairs).

Out of the 19 new Transavia France routes, four are routes where no other carrier operates and so it will have a monopoly on these four routes. One of these four, Lyon-Madeira, is to be part of a triangular Lyon-Porto-Madeira service. Although there is not set to be any competition on Lyon-Madeira, easyJet competes on Lyon-Porto and TAP Portugal competes on Porto-Madeira.

The focus of the new routes is on leisure markets and more than half of them will have only a single or twice weekly service. Only one, Paris Orly-Rome Fiumicino (10 times weekly), will have a frequency of daily or more. This kind of schedule is clearly not aimed at business travellers on most of these routes.

*to use A320 equipment
Source: CAPA – Centre for Aviation, OAG

Six A320 aircraft to be leased from Air France, to fly alongside Transavia’s Boeings

Transavia will launch at least some of the new Paris Orly routes using A320 aircraft leased from Air France. It has been reported that it will lease up to six A320s, as part of a labour agreement with pilots. The additional aircraft numbers for the French arm of the group’s LCC subsidiary are one more than indicated in Oct-2013, when Air France-KLM said the Transavia France fleet would grow by five aircraft in summer 2014.

This represents a significant increase in the size of the Transavia France fleet, which Air France-KLM reported at 11 aircraft at 30-Sep-2013 (unchanged as of 28-Jan-2014, according to the CAPA Fleet Database). In percentage terms, this increase will mean that 2014 sees the biggest annual growth in the Transavia France fleet since the Orly-based operation was launched.

In addition to the challenge of managing such rapid growth in the fleet, Transavia France also now faces the challenge of operating a fleet of mixed aircraft types. Its existing fleet consists of 11 Boeing 737-800 aircraft. Its Dutch sister company, Transavia Netherlands, operates 31 737 aircraft (22 737-800s and nine 737-700s at 28-Jan-2014, according to the CAPA Fleet Database), and KLM also operates 737s. The introduction of Airbus A320 family aircraft from Air France will add complexity in terms of crew rostering, training and aircraft maintenance.

To some extent, these challenges may be mitigated by the fact that the aircraft will remain within the Air France-KLM Group and, for example, existing maintenance arrangements for the aircraft may continue. Nevertheless, it is unusual for any LCC to switch to a second aircraft type with relatively small numbers.

Narrowbody fleet numbers for the Air France-KLM Group, IAG and the Lufthansa Group at 28-Jan-2014 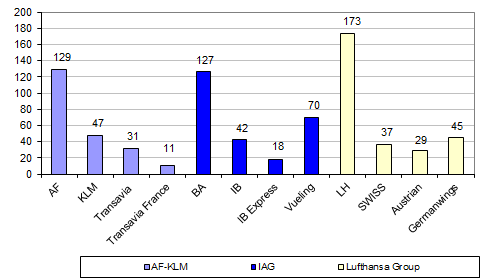 The two arms of Transavia currently have 42 aircraft, or 19% of the narrowbody fleet of the Air France-KLM Group as a whole. Comparing this with the LCC subsidiaries of the other two major legacy groups in Europe, IAG’s Vueling and Lufthansa’s Germanwings account for fleet is 27% and 16% of their group’s respective narrowbody fleets.

Narrowbody fleet numbers by carrier type for the Air France-KLM Group, IAG and the Lufthansa Group at 28-Jan-2014 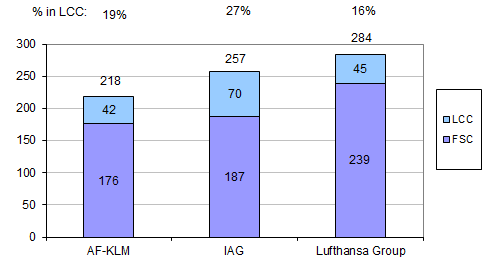 The transfer of these six A320s is likely to be a precursor to the transfer of further numbers of Air France medium-haul aircraft to Transavia. According to fleet plans announced by Air France-KLM in Nov-2013, Transavia France’s fleet will increase to 26 aircraft in 2016, when the total Transavia fleet will reach 56 aircraft.

Over this time, Air France will reduce the number of narrowbodies deployed in feeding its Paris CDG hub and in serving point-to-point routes from its French regional bases. It seems reasonable to assume that aircraft no longer needed by Air France will be transferred to Transavia.

Possible narrowbody fleet numbers for the Air France-KLM Group, IAG and the Lufthansa Group in 2016 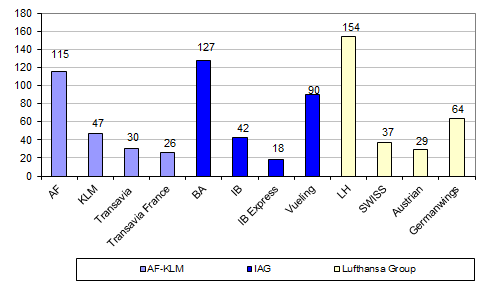 If we were to assume, for illustrative purposes, that the total narrowbody fleet of the Air France Group remains stable and that all additional aircraft for Transavia France are transferred from Air France, then the combined Transavia fleet would account for 26% of the group’s narrowbodies in 2016. The two other Big Three groups will also grow their LCC fleets (as will the principal independent LCCs in Europe).

Possible narrowbody fleet numbers by carrier type for the Air France-KLM Group, IAG and the Lufthansa Group in 2016 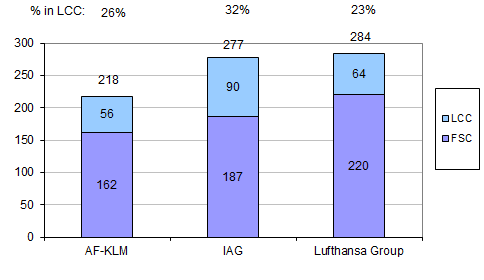 So, the Air France-KLM Group sits between its two big legacy rivals when it comes to the planned proportion of its narrowbody fleet given to its LCC subsidiary. The planned growth in its LCC fleet between now and 2016 is 33%, compared with 29% for IAG and 42% for the Lufthansa Group. However, its planned 2016 Transavia fleet of 56 aircraft is smaller than the 90 that Vueling will operate and the 64 planned for Germanwings in 2016.

Of course, it is not just a question of numbers. How is each group using its LCC subsidiary? There are significant differences. Germanwings already had a medium-sized (but low growth) European network before Lufthansa’s decision to grow this significantly. Lufthansa is now very clearly transferring routes previously operated by the mainline Lufthansa branded operation to Germanwings, focusing on the non-hub point-to-point network. There is some scope for Germanwings to start its own routes and for it not to assume previous Lufthansa routes, but, on the whole, it is a straight substitution exercise.

In the case of IAG, although Vueling was partly founded by Iberia, it developed as a totally independent LCC until acquired outright by the group in 2013. It established itself as a successful and profitable pan-European LCC operating in a wide range of countries and markets. IAG intends to allow it to continue to operate on a stand-alone basis and has also developed Iberia Express as a lower cost operator on routes feeding its Madrid hub. Vueling is the largest of the LCC operations of the Big Three legacy groups and a recent substantial aircraft order will keep it that way.

Air France-KLM is using its Transavia operation mainly to open new routes in point-to-point leisure markets from France and also, to a lesser extent, to fly alongside Air France on leisure routes already operated. Less still, Transavia is sometimes being used to take over leisure routes from Air France.

At the same time, Air France is reducing its hub feed and French regional point-to-point activities, while retaining Air France as its operator in these segments and attempting to improve their cost efficiency. The Dutch arm of Transavia continues as the main short/medium-haul leisure route operator for the group from the Netherlands, without much growth.

Although there are significant differences in terms of cost efficiency and size between Vueling and Germanwings, they both operate in regional point-to-point and leisure markets. In effect, they can be seen as occupying broadly the same space for their respective groups for which Air France-KLM uses both Transavia and the Air France regional network. In addition, IAG has Iberia Express to attempt to improve its financial performance on hub feeder routes.

The main drawback of Lufthansa’s Germanwings appears to be that its low cost credentials are shaky (according to CAPA analysis), but there is at least a clear vision for it. Vueling is one of Europe’s leading LCCs, with a record of innovative service enhancements to the pure LCC model, while Iberia Express, if IAG’s claims are to be believed, has a cost base not far from that of the LCCs.

In spite of Transavia’s competitive cost base, it would seem that Air France-KLM’s strategic vision for the use of lower cost subsidiaries on short/medium-haul routes remains more limited than that of both Lufthansa and, in particular, IAG. It may need to encompass a wider scope if Air France is to achieve its goals.