IAG’s aircraft orders are like waiting for a bus. Three arrive at the same time.

On 26-Sep-2013, shareholders in IAG will be treated to a rare event: the opportunity to approve a major aircraft order for the first time in several years. In fact, rather like the proverbial buses after a long wait, there are three of them at the same time. British Airways is getting 787s and A350s and Vueling is getting A320s (including A320neo), while Iberia is getting used to being the poor relation and must prove it can return to profit before any new orders.

After many years of very few new aircraft deliveries (including the years prior to the creation of IAG in 2010), IAG will take around 20 every year until the start of the next decade. This will require it to sustain levels of capital expenditure not seen by the combination of BA and Iberia since the 1990s. A sustained rise in profits will also be needed.

These new orders for subsidiaries Vueling and British Airways require the approval of IAG shareholders at an EGM to be held in Madrid on 26-Sep-2013. IAG sent a circular to shareholders on 19-Aug-2013 setting out the details of the orders. In total, they amount to 98 firm orders and will involve annual deliveries of 10 aircraft in 2015 and 2016, rising to around 20 per annum in the years 2018 to 2020. The full delivery schedule is set out in the table below.

* only those new orders awaiting approval by shareholders at 26-Sep-2013 EGM
Source: CAPA - Centre for Aviation and IAG

At the start of 2013, prior to these new orders, IAG already had firm commitments to acquire 69 aircraft to be delivered between 2013 and 2017. Of these previous commitments, only 17 were for Iberia (nine A320s and eight A330-300s) and 52 were for BA (10 A320 family, six 777s, 24 787s and 12 A380s). Including the already existing orders, the commitments announced in 2013 will maintain the group’s delivery rate at around 20 aircraft annually until 2020. Previously planned new aircraft on operating leases for Vueling are not included in this total.

IAG new orders and previous commitments in the delivery schedule (number of aircraft): 2013 to 2021*

In terms of aircraft numbers, IAG’s total of 167 firm orders are now roughly evenly divided between narrowbodies (81 aircraft, excluding previously planned Vueling operating lease additions) and widebodies (86 aircraft). Of course, in terms of value, the balance tips very much more towards the widebodies. The orders include four out of the five major new aircraft types: the A380, the 787, the A350 and the A320 neo (only the 737 MAX is missing from IAG’s shopping list).

No new orders for Iberia

In terms of who gets what, IAG’s orders for the period 2013 to 2021 reflect the pecking order of its subsidiaries. The new darling of the group, Vueling has 62 firm orders, more than its total fleet at the start of 2013, and BA’s diligence in staying profitable is rewarded with 88 deliveries through this period, nearly one third of the number of aircraft already in its fleet. By contrast, the group’s under-achiever, Iberia has no new orders to add to the 17 it already had outstanding at the end of 2012.

However, as Iberia makes progress with its restructuring and hauls itself back on the route to profitability, its parent IAG is offering it a carrot. When announcing the long-haul firm orders with Boeing and Airbus, IAG said that it had also reached agreement with both manufacturers to secure commercial terms and delivery slots that could lead to firm orders for A350s and/or Boeing 787s for Iberia. The group’s press release was clear: “Firm orders will only be made when Iberia is in a position to grow profitably, having restructured and reduced its cost base.”

In order to understand where IAG’s current aircraft orders stand in relation to its historic capex cycle, it is informative to look back at both BA’s and Iberia’s past record of investment in property, plant and equipment (the vast majority of which has always been aircraft).

As BA is the larger carrier, it has always spent more than Iberia on capex in absolute terms. Both have been spending less over the past decade than they did in the late 1990s. The economic crisis sparked by the 9/11 terrorist attacks in 2001 led to a significant reduction in investment, which has only partially been turned around again in the past three years. 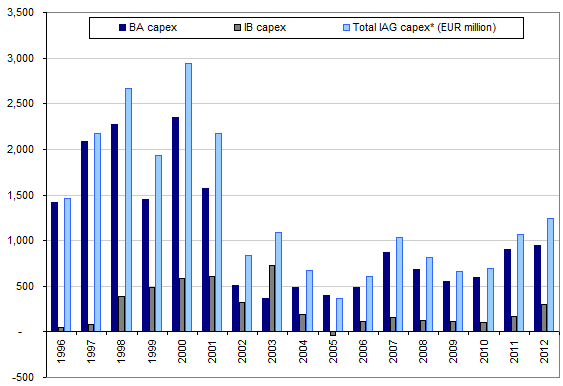 In addition to spending less in absolute terms than BA, Iberia also spends less on capex relative to its revenues. In the past decade, this has largely been due to its use of off-balance sheet operating leases to finance its aircraft and these do not show up in capex figures. Prior to that, although its capex as a percentage of revenues varied widely, it did achieve peaks not dissimilar to those of BA in the mid-teens. More recently, both have settled into rates in the low to mid single digit percentage area.

Capital expenditure as a percentage of revenues for British Airways, Iberia and IAG*: 1996 to 2012 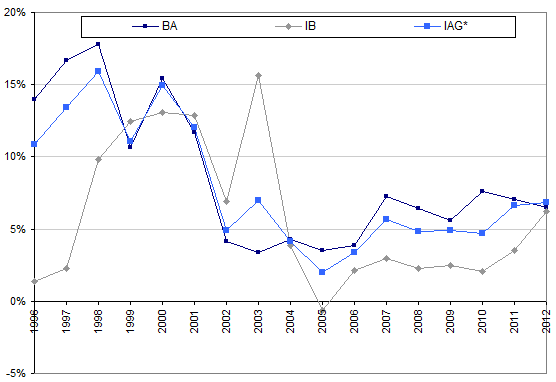 Iberia’s use of operating leases has risen sharply since 1996, when 20% of its fleet was financed using this approach, a lower percentage than BA’s 29% at the time. In the 2000s, Iberia overtook BA on this measure and around 80% of its aircraft have been on operating leases in the past three years. By contrast, less than 15% of BA’s fleet have been operated leases in the past four years.

Operating leased aircraft as a percentage of total fleet numbers for British Airways, Iberia and IAG*: 1996 to 2012 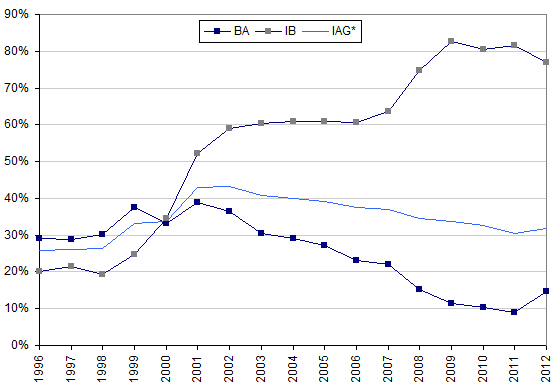 The combined capex of BA and Iberia as a percentage of their combined revenues fell from a high of 16% in 1998 to a low of 2% in 2005, before recovering to a range of between 5% and 7% every year since 2007. While the yet-to-be-created IAG spent more than world airlines did in the late 1990s, as a percentage of revenues, it has fallen significantly short of the world benchmark every year since 1999.

In the decade to 2012, IAG's average capex as a percentage or revenues was a little more than 5%, compared with a world average of around 13%. A shift that started as a cyclical response to changes in the business environment seems to have become embedded as a structural change.

Capital expenditure as a percentage of revenues for IAG* (EUR million) and world airlines: 1996 to 2012 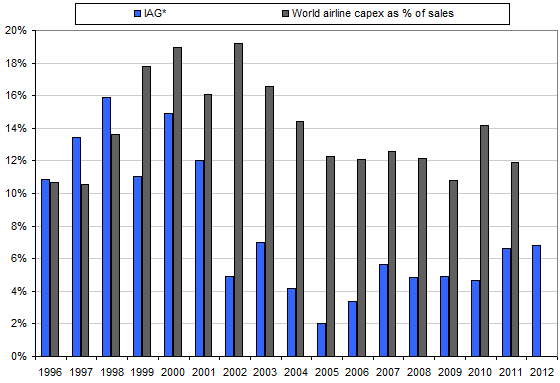 *sum of BA and IB as separate entities prior to 2010
Source: CAPA - Centre for Aviation, Airline Monitor, British Airways, Iberia and IAG

This is something of a two-edged sword. On the one hand, IAG has become much more efficient in the use of its capital assets, maintaining sales levels with much lower capex levels. This is good for shareholder returns. On the other hand, its fleet has aged much more quickly than the world average. For example, BA’s average fleet age was around seven years in 2002, but it had grown to around 13 years in 2012, compared with a world average fleet age that has remained around 12 years. Eventually, this is not good for customers and sales levels in the long run.

Lower levels of capex have also been accompanied by a shrinking fleet since the late 1990s/early 2000s for both BA and Iberia. The IAG 2012 fleet of 377 aircraft was almost one third smaller than the combined 556 aircraft of BA and Iberia in 1999. BA’s fleet has been fairly stable since 2006, while Iberia’s continued to contract and only stabilised in 2011. The increase in BA’s fleet in 2012 was the result of its acquisition of bmi, now integrated into BA.

Total fleet size (number of aircraft) for British Airways, Iberia and IAG: 1996 to 2012 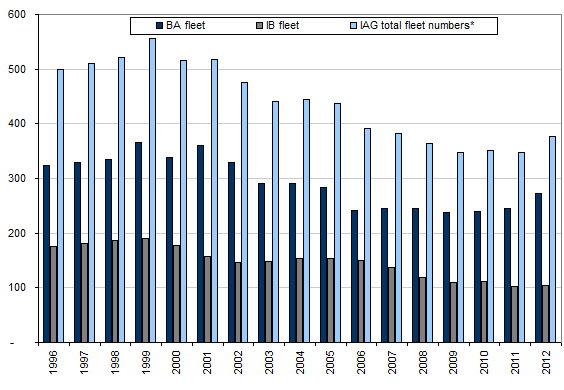 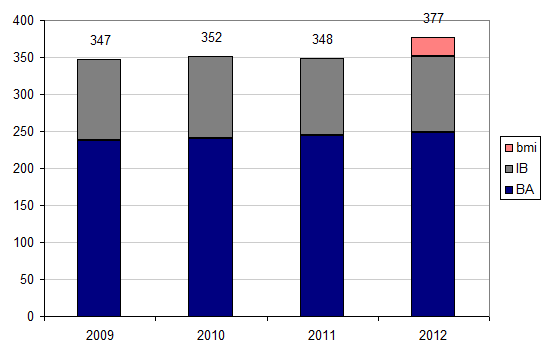 IAG is only too aware that an ageing fleet needs replacing, but it is also right to work its existing assets as hard as possible and only to add to its capital base if this can be done profitably. It has said that most of the new aircraft will be used for replacing older aircraft, with growth remaining modest.

So, what does IAG’s new shopping list mean for its capex levels? To answer this question accurately would require knowledge of the prices that IAG has secured from Airbus and Boeing. The shareholder circular gives the published base prices for each of the aircraft types, but, as is common, it also refers to “certain price concessions”, which remain confidential. For a large order, such concessions could be as much as a 40% to 50% discount from the published price.

Value of IAG’s new orders at published base prices*

The total value of IAG’s new orders at the published prices is a little over EUR12 billion. If we assume a discount of 45%, IAG might be paying EUR6.7 billion (before escalation) over the seven years 2015 to 2021, an average of almost EUR1 billion per annum. This is more than the average total capex of BA and Iberia combined in the 10 years to 2012 and is on top of previously planned investment. The annual sums are likely to be higher in 2018 to 2020, given the weight of widebody deliveries in those years.

IAG capex to step up to 10% of revenues

At its Capital Markets Day in Nov-2012, IAG said that capital expenditure would rise from EUR1.2 billion in 2012 to EUR1.9 billion in 2013 and EUR2.0 billion in 2014, before dropping back to EUR1.1 billion in 2015. This was before the new orders for BA and Vueling, which will result in a similar number of annual aircraft deliveries in each of 2015 to 2020 as already expected in 2013 and 2014. This capex plan also excludes the value of Iberia’s A330 orders, which were expected to be operating leased.

*As of IAG Capital Markets Day 9-Nov-2012; figures are net of assumed operating lease funding for A330 fleet
Source: IAG

Overall it seems that capex levels may not revisit the EUR3 billion level, or reach 16% of sales, as seen in the late 1990s. Nevertheless, IAG’s capex looks set to remain in the region of EUR2 billion per annum from 2013 until at least the end of the decade. This is an increase from 7% of sales in 2012 to around 10% of revenues, double the average level of the 10 years to 2012. IAG will need to reach and sustain its 2015 EBIT target of EUR1.6 billion (excluding Vueling) in order to generate a sufficient return on, and to fund, this higher rate of investment.

See related report: IAG returns to profit in 2Q2013. Is this a turning point?