Air France-KLM: 'on the way to being saved' or are new measures not radical enough?

Air France celebrates its 80th birthday this week, amid claims by Alexandre de Juniac, Air France-KLM Group chairman and CEO, that it risked dying or “becoming a small regional carrier” were it not for the latest cost saving plans (Les Echos, 7-Oct-2013). Now, he says, Air France “is on the way to being saved”. He is counting on new restructuring measures that were presented to Air France’s works council on 4-Oct-2013 to restore the financial health of the bigger and more troubled of the group’s two main airlines.

In 1H2013, the Transform 2015 programme achieved profit improvements of EUR100 million, but the group conceded that Air France would not achieve its breakeven target in 2013. It said that additional measures would be needed to improve results in the cargo division and in Air France’s medium-haul operations.

As expected, the measures include a new voluntary redundancy plan, a reorganisation of the French regional bases, a reduction in Air France freighter capacity, cuts to Air France’s point-to-point medium-haul network and growth for LCC subsidiary Transavia France. Are even these measures radical enough to restore Air France to a sustainable profit path?

After making insufficient progress towards achieving these aims, the group announced on 26-Jul-2013 that further measures would be needed. The focus of the new measures is very much on Air France. 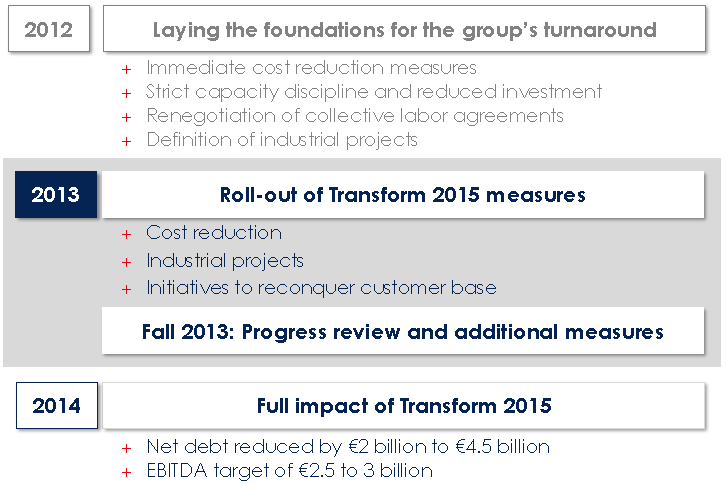 In 2012, the Transform programme originally identified overstaffing of 5,100 at Air France and set out measures to reduce headcount accordingly. It aimed to achieve labour cost savings of EUR400 million annually in 2014 relative to 2012 (excluding the impact of changes to pension accounting and the integration of Airlinair into the consolidated group).

New agreements on working practices with KLM unions were concluded in Dec-2012. The only outstanding Air France employee group not to have finalised an agreement in accordance with the original targets is the cabin crew.

At the time of the group’s 1H2013 results announcement in late Jul-2013, ground staff cuts of 1,700 out of an approved target of 2,880 had already been achieved, as had pilot headcount reductions of 160 out of 270. A target to reduce Air France cabin crew by 500 was still the subject of discussions with employees. 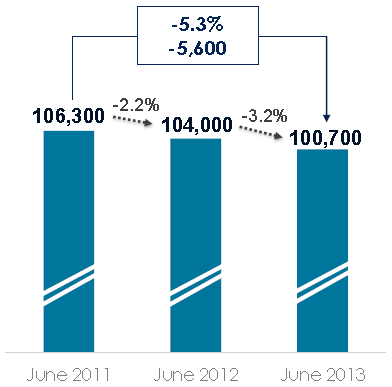 As a result of further measures relating to cutting capacity and costs in Air France’s medium-haul and cargo businesses, the group identified an additional 2,800 jobs that it believes are no longer needed.

Under plans communicated to the Air France Works Council for consultation on 4-Oct-2013, Air France has proposed a new voluntary redundancy scheme for ground staff covering 1,826 jobs. This is broken down between cargo (282 jobs), Paris CDG hub (582), Paris Orly (128), French regional stations (591), administrative activities (145) and other activities (98). The maintenance division, IT and “certain cross-functional activities” are excluded from the plan.

Regarding flight crew positions, Air France says that measures for “handling the excess numbers” of 350 pilots and 700 cabin crew will be addressed in 2014 through “other measures”. The schedule of the voluntary departure plan will allow candidates to volunteer between 3-Feb-2014 and 26-Jun-2014, with departures taking place between 28-Feb-2014 and 31-Dec-2014. There is also a plan to support professional retraining.

Air France-KLM says that this staff reduction plan, combined with wage moderation measures, will have an impact of around EUR150 million on annual employee costs. There will be a EUR200 million additional restructuring provision in the 2013 annual accounts.

The total headcount reduction under Transform 2015 now looks set to be in the region of 8,000 to 9,000. While the new measures represent a significant increase in the previously planned job cuts, the total number will amount to a reduction of only around 8%-9% over three years.

Most of the cuts are concentrated in Air France, where the fall in headcount will be a slightly more aggressive 13% over three years. To give some additional context, British Airways cut its staff numbers by 24% over three years in the early 2000s and Iberia reduced its numbers by 9% in 12 months between Jun-2012 and Jun-2013 (and it plans further cuts). The clear implication: Air France will continue to carry excess baggage.

Air France says that, as a group, it intends to maintain its strong presence in France, but capacity is to be reallocated between its operating subsidiaries. As expected, it will further reduce Air France’s own capacity on the point-to-point network based out of Paris Orly and the French regional bases.

At the same time as Air France’s capacity reduction, Transavia France’s capacity will continue to grow and it will operate five additional aircraft from summer 2014. Transavia France operated 11 aircraft at the end of Jun-2013 (up by three from a year earlier), compared with Air France’s medium-haul fleet of 138 aircraft (down by 11 from a year earlier). Transavia will add new European destinations to its network from Paris Orly. 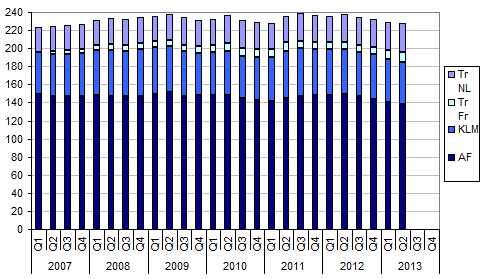 Mr de Juniac told Les Echos (2-Oct-2013) that the growth of Transavia would not totally compensate for the fall in revenues at Air France, but he aims to keep the gap to a minimum: “The idea is not to substitute Transavia for Air France, but to redeploy the slots freed up at Orly to develop Transavia’s operations on predominantly leisure routes in Europe with growth potential.” He said that Air France’s domestic network from Orly did not have any great growth potential, given its maturity and competition from high speed rail.

French regional bases are to see 'change in production methods'

The Air France Group will focus cost reduction on the French stations. It has identified a need for a “change in production methods” to align with market standards, to handle passengers better to reduce costs sustainably. Station by station plans, involving reorganisation of process and more outsourcing, were presented to the Works Council, although specific details have not been announced.

According to reports in the French media (Les Echos, 4-Oct-2013), the French regional stations that will be most affected are Marseille, Toulouse and Nice, each with headcount reductions of around 20% of their ground staff. The reports say that Marseille will lose 188 jobs and it is to see its fleet fall from 11 to eight aircraft by the end of 2013 and then to seven by winter 2014. Toulouse is to lose 90 jobs, but will keep its eight aircraft, while Nice will lose 105 jobs and see its fleet fall from six to five aircraft.

Air France had a total of 25 aircraft at its French regional bases in summer 2013, down from 29 in summer 2012. In addition to these headcount and further fleet reductions, new baggage check-in systems and the use of sub-contracting for activities such as baggage sorting are reportedly to be introduced.

Air France acknowledges that the global air freight market is “permanently in overcapacity”, but it also believes that passenger fleet belly cargo capacity makes a vital contribution to its passenger operations. With belly cargo taking a growing share of global air freight, Air France is “continuing to adjust” its freighter fleet. At 30-Jun-2013, it had five Boeing 747-400Fs and two Boeing 777Fs in its freighter fleet (although two of the 747s were not in operation with Air France).

It now plans to remove all its 747 freighters in 2015 (when the passenger 747s will also leave the fleet). This will focus Air France’s freighter fleet only on its two Boeing 777Fs. It also plans to outsource cargo operations at Paris Orly, which it says are sub-scale and are “currently operating at non-market costs”.

The planned reduction in the freighter fleet should help load factors, although there is still some time before Air France’s 747 freighters are fully withdrawn. Moreover, the group does not separately report cargo capacity and load factor for its belly capacity and its freighters, so it is difficult to assess the impact of the freighter withdrawal on the overall cargo business.

Given the weakness of the cargo segment and the overcapacity in the world air cargo market, it is to be questioned why Air France is waiting until 2015 to remove its 747 freighters and why it needs to retain any freighters at all. 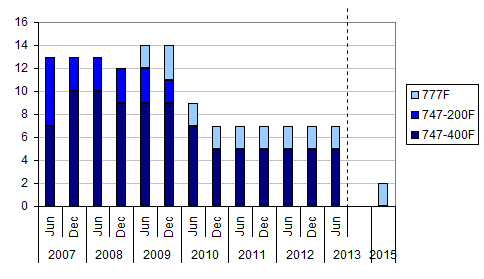 Air France management also plans measures in other areas in order to complete the Transform 2015 plan and to achieve its target of a positive result in 2014. It recognises that it must continue to reduce costs, notably “where discrepancies with the market threaten the long-term sustainability of activities”. These measures include procurement-related actions, the more effective management of mobility, wage moderation and adapting resources to workloads.

Air France management is also focusing on a problem identified by its chairman and CEO Frédéric Gagey: “When the planes are full, like this summer for example, which was good, we earn money. But these gains are wiped out by losses in the winter”. Its plans include a better adaptation of costs to the seasonality of operations; for example, Air France proposes to negotiate the introduction of annual working hours in the stations. It will reduce capacity significantly this winter, particularly between the French regions and Europe and on French Shuttle services.

The group’s plans are not all confined to making cuts. It continues to plan growth on long-haul and to launch new routes, particularly in Africa, Asia and Latin America. The renewal of Air France’s long-haul fleet will be accelerated with Boeing 747s exiting the fleet in 2015 (earlier than previously planned) and Boeing 787s and Airbus A350s entering in 2017 and 2018 respectively.

Initiatives to enhance the Paris CDG hub are planned, based on technological developments in passenger operations and the more upmarket positioning of the Air France product. This programme is dubbed ‘Future hub’.

As part of its efforts to move up market, Air France unveiled its new Economy and Premium Economy cabins on 24-Sep-2013. The first flight with the new cabins will take place in summer 2014.

In other divisions – outside passenger and cargo – Air France will continue to grow in engineering and maintenance, which are profitable.

Union cooperation will be crucial

Although much of Air France-KLM’s Transform programme has been achieved with union cooperation, this can never be taken for granted. Les Echos (4-Oct-2013) reported that the biggest ground staff union, CGT, denounced what it called a “closure in disguise” of the regional bases. Several unions have appealed to the government to support the carrier’s recovery.

The government’s minority shareholding and EU laws on state aid prevent it from playing any meaningful role in subsidising Air France, but this attitude among unions illustrates an inability among some sections of the workforce to face the airline’s problems.

As noted above, the planned headcount reductions do not appear radical by comparison with other European airlines’ restructuring programmes over the past decade.

With losses in the passenger division greater than those in the cargo division, the other key issue is the relative development of high-cost Air France and LCC subsidiary Transavia France in medium-haul. Our initial conclusion is that the planned growth of Transavia France at the expense of Air France does not look aggressive enough.

Air France has not announced details of its plans for the development of its medium-haul fleet overall. The French media reports mentioned above suggest a fleet reduction of five aircraft in the three most affected French regional bases over the coming year. It seems likely that there could be cuts at other regional bases and also in both Paris airports. From summer 2012 to summer 2013, the regional bases saw a reduction of four aircraft, while the total medium-haul fleet of Air France was cut by 11 aircraft.

Previous CAPA analysis suggests that Transavia’s unit costs may be half those of Air France-KLM’s medium/short-haul operation.

There is little in what we have seen of the further Transform measures that have been announced by the group and/or reported in the French media to reduce our concern that its use of Transavia is ‘too little, too late’. 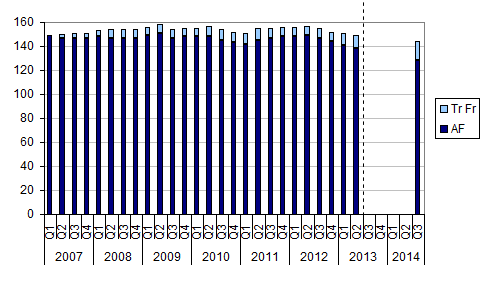