IAG returns to profit in 2Q2013. Is this a turning point?

IAG returned to an operating profit in 2Q2013, after a loss in the same period a year ago and a widening of its loss in 1Q2013. BA’s operating profit grew sharply and Iberia’s operating loss was cut by more than 60%. This was the first quarter in 11 that saw the Spanish carrier post a year-on-year improvement in its operating result. Iberia’s return to profit will depend, among other things, on its management negotiating labour productivity gains under its transformation plan.

IAG’s non-fuel costs per ASK were broadly stable in 2Q (excluding newly acquired LCC Vueling) after rising in 1Q, supporting IAG’s contention that the restructuring programme would start to bear fruit in the latter part of the year. Moreover, unit revenue trends remain positive under tight capacity control. In Vueling, IAG now owns Europe’s third largest LCC, putting it ahead of rivals Air France-KLM and Lufthansa in the scale (and cost efficiency) of its low-cost operations. Has IAG reached a turning point?

In 2Q2013, IAG turned around a pre-exceptional operating loss of EUR4 million last year to record a profit of EUR245 million. The net result moved from a loss of EUR78 million to a profit of EUR127 million. Revenues grew 3.4% to EUR4,613 million, with capacity (ASK) up 4.2% for the group. 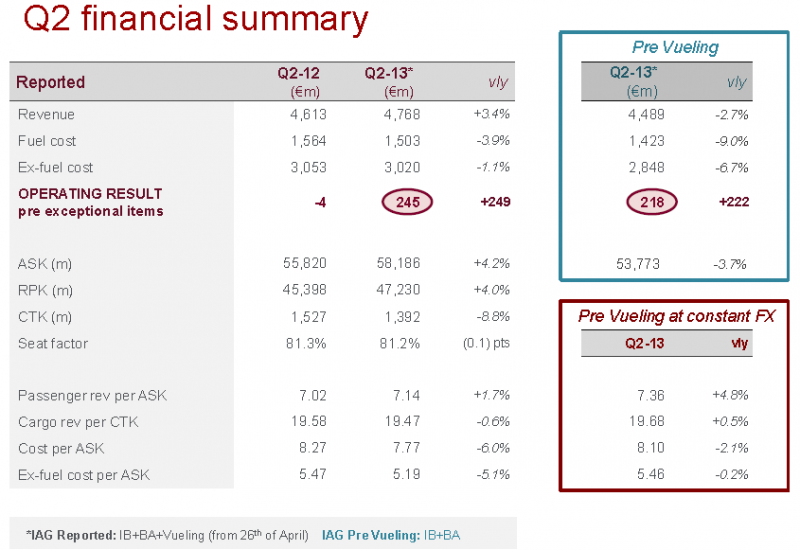 The quarter included the consolidation of Vueling into the group results from 26-Apr-2013, which contributed EUR27 million to the operating result in this period. Excluding Vueling, revenues were down 2.7% on a 3.7% cut in ASKs and the operating result was EUR218 million. 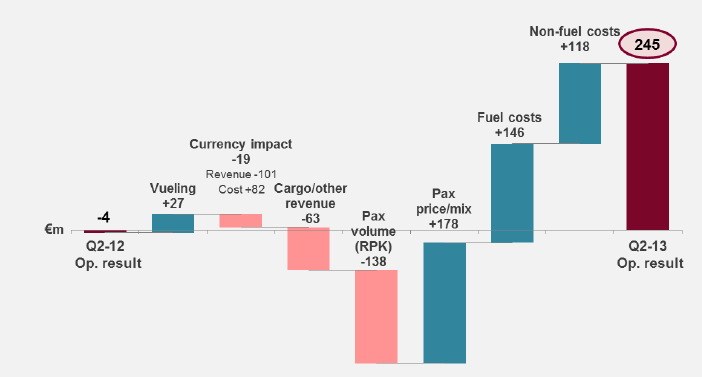 As compared with the end of Dec-2012, IAG’s gross cash balance (including interest bearing deposits) increased from EUR2.9 billion to EUR3.6 billion and net debt decreased from EUR1.9 billion to EUR1.0 billion, taking the ratio of net debt to equity down from 27% to 18%. Vueling accounted for EUR549 million of the cash balance at 30-Jun-2013. Vueling finances aircraft off-balance sheet using operating leases and this explains the increase in the group’s ratio of adjusted net debt (which adds capitalised operating leases at eight times annual lease payments to reported net debt) to equity from 51% to 54%.

Perhaps the most significant aspect of the 2Q operating result was that both British Airways and Iberia contributed to the year-on-year improvement. BA’s operating profit was up from EUR94 million in 2012 to EUR247 million in 2Q2013, while Iberia’s loss narrowed from EUR93 million to EUR35 million. This reversed the negative trend that Iberia has seen over the previous 11 quarters. 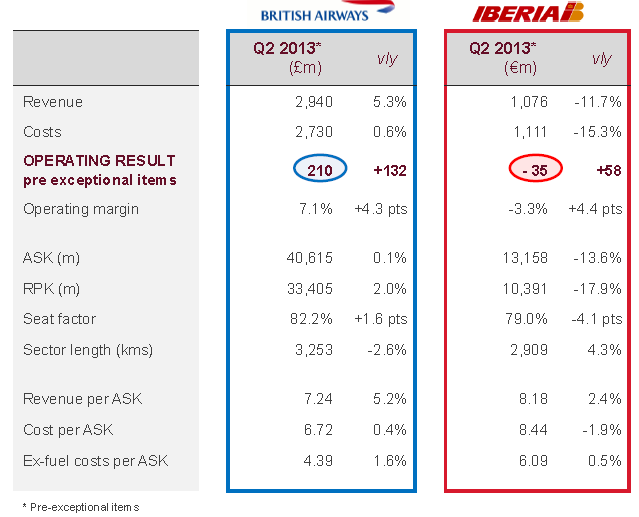 The group’s passenger unit revenue grew by 1.7% year-on-year. Excluding Vueling and the impact of currency movements, this growth was 4.8%, extending the growth trend in rolling 12 month unit revenues to three successive quarters. Rolling 12 month cargo yield has also increased over the past three quarters (although this is not the same as unit revenue since it does not take account of load factor). 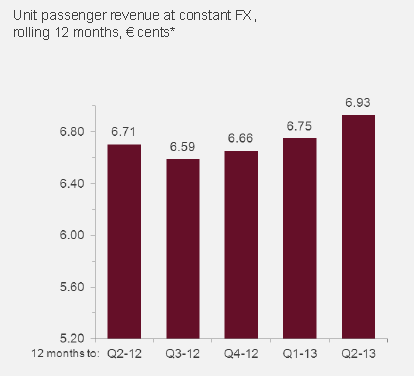 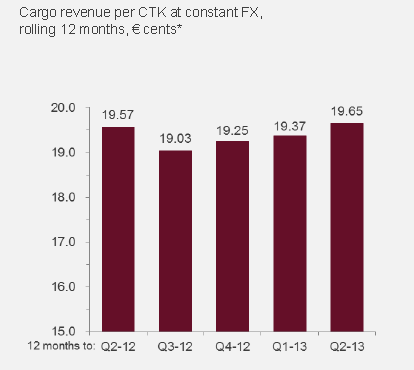 Passenger unit revenues (excluding Vueling and currency exchange impacts) saw year-on-year growth in all regions apart from IAG’s domestic markets. The strongest unit revenue growth was 8% in Europe, possibly reflecting a capacity cut of 4.1%. However, domestic unit revenues fell by 2.2% in spite of a 13.7% cut in capacity. This mainly reflects the weakness of demand in the Spanish market.

North America, where capacity grew by 2.3%, saw unit revenue growth of 2.2%. IAG CEO Willie Walsh told analysts at the 2Q2013 results presentation that North America continues to be a strong part of the network. In Latin America and in Middle East/Africa and South Asia, unit revenues were broadly flat year-on-year.

Bucking the trend experienced both by Air France-KLM and by Lufthansa, IAG enjoyed unit revenue growth in Asia-Pacific in the quarter. Mr Walsh and BA CEO Keith Williams pointed to a few reasons to explain this.

On routes to Australia, BA now operates the Boeing 777-300, which it considers to be the right size for that market, and its service has been transferred to BA’s Terminal 5 at its Heathrow hub (following the end of its joint business agreement with Qantas, with whom it used to operate from Terminal 3). In addition, the joint business agreement with Japan Airlines is having a positive impact and new routes, such as Seoul, are performing well. 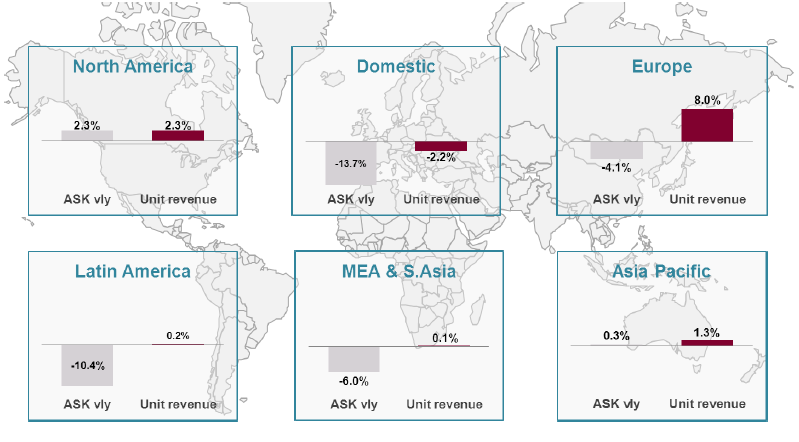 Growth in both premium and non-premium unit revenues 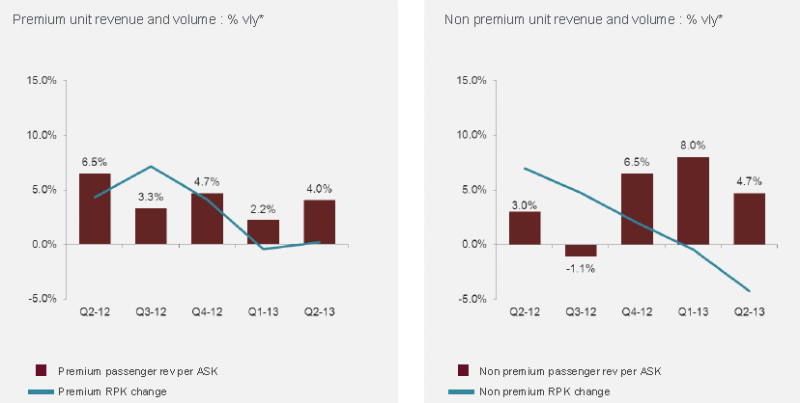 Removing the impact of Vueling and exchange rate movements, like-for-like non-fuel unit costs were only just below flat year-on-year (-0.2%). However, this compares with an increase of 4.9% in non-fuel unit costs in 1Q2013 and is consistent with IAG’s expectation that unit cost trends would improve through the year. It still expects non-fuel unit costs to be flat excluding Vueling for the financial year. 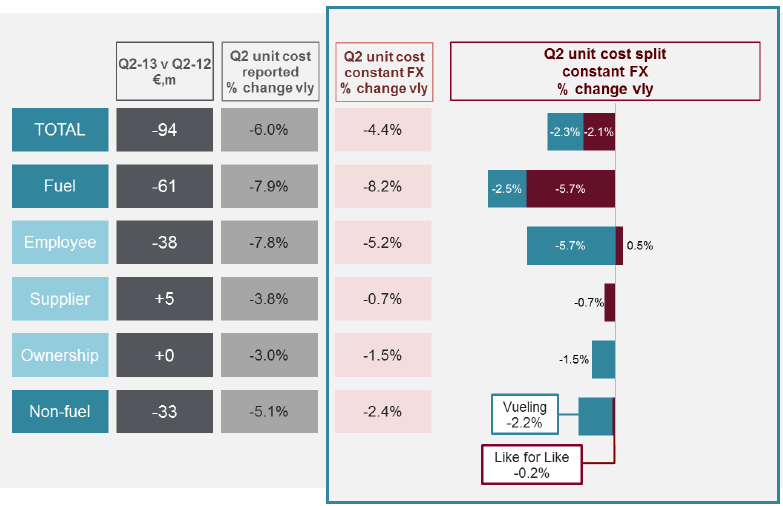 The CEO of Iberia, Luis Gallego, gave a presentation to analysts with an update on the restructuring of Iberia. The transformation plan of Nov-2012 set out the aims of transforming short-haul to close the CASK gap with competitors (particularly LCCs); turning around its commercial performance to close the RASK gap; implementing a redundancy programme; restructuring non-core businesses; and a 15% capacity cut.

The Mediation Agreement of Mar-2013, signed by representatives of the ground staff and cabin crew, provided for at least 3,141 redundancies, salary cuts of 14% for flight crew and 7% for ground crew, a salary and tenure freeze, and an additional 4% salary cut unless productivity gains could be achieved. Pilot union SEPLA did not sign the Agreement, but a 4-Jul-2013 decision by Spain’s high court, the Audiencia Nacional, ruled that it applied to all employee groups.

Negotiations are now focusing on achieving these productivity gains, so that the additional 4% salary cut can be reversed, and further cost cuts as well as further structural changes to Iberia, with a view to returning to profitable growth and making new aircraft orders. Iberia’s management team has been restructured under Mr Gallego, who was appointed on 27-Mar-2013, with a reduction in the top management team from 71 to 35 people. 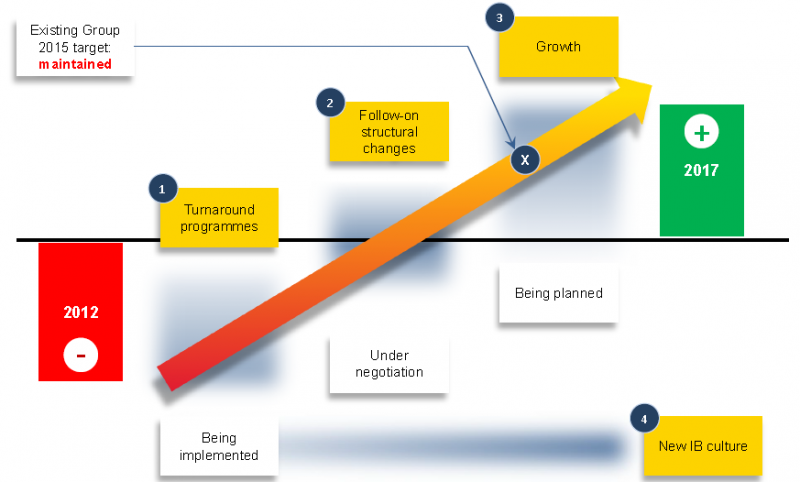 Iberia headcount reduction to be ahead of plan by end 2013

Iberia’s headcount reduction started before the Mediation Agreement and there was a decline of 1,865 from Jun-2012 to Jun-2013. The Mediator’s plan aims for a reduction of 2,127 by the end of 2013, but Iberia expects to be ahead of plan and to achieve 2,375 by the end of this year. In spite of the significant changes at Iberia, Mr Walsh told analysts that both Iberia and Iberia Express had achieved record on-time performance levels and were seeing improving customer satisfaction.

IAG now expects that group passenger capacity (ASK) will grow by 5.2% for the full year, with Vueling responsible for all the growth. Excluding Vueling, its growth plan is a reduction of 2.4%, a slightly bigger cut than the 1.8% reduction planned at the time of its 1Q results. BA’s capacity will be down 2.1% (+2.8% planned at 1Q stage) and Iberia’s down 14% (no change from plans as at 1Q).

The third quarter will see an underlying capacity cut of 3.5%, while 4Q will see flat year-on-year capacity due to an increase in BA capacity as a result of extra gauge from its new A380 and 787 aircraft. 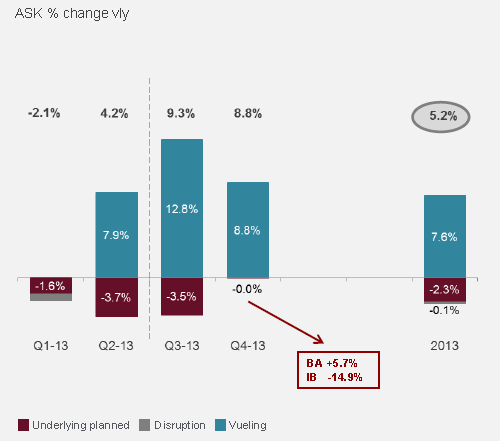 Still no profit target for 2013, but the old target looks achievable

IAG continues to be restricted from giving any specific profit guidance for FY2013, because of its requirement to seek shareholder approval for fleet orders, which would require it to report on any outstanding profit forecast as part of that process.

Apart from its capacity growth plans, outlined above, all it has said is that current trading is in line with recent trends and that it should see a reduction in non-fuel unit cost (flat excluding Vueling). It has also said that its expects its FY2013 fuel bill to fall to EUR5.7 billion from EUR6.1 billion last year and this is a little lower than the EUR5.8 billion that it expected at the time of its 1Q2013 results announcement.

Overall, as noted when discussing IAG’s 1Q results, there is nothing to suggest that IAG could not still reach its previous FY2013 operating result target to beat 2011’s EUR485 million. This target (which was set after announcing FY2012 results) did not include Vueling and so an operating result comfortably ahead of EUR500 million looks achievable.

IAG’s operating result improvement in 1H2013 was EUR220 million and an improvement for FY2013 over last year’s loss of EUR23 million of between EUR500 million and EUR600 million could be on the cards. IAG would have to achieve similar improvements in 2014 and 2015 to reach its 2015 operating result target of EUR1.6 billion (pre-Vueling). Again, this looks achievable, but it leaves little margin for error or adverse changes to market conditions between now and 2015.