Freight has become the perennial underachiever in the air transport industry. According to IATA, its share of world airline revenues fell from 12.4% in 2003 to 9.1% in 2012 and will fall to an estimated 8.7% in 2013. While a sharp increase in cargo traffic and yield led the industry back into profit in 2010, freight has been a drag since then. It underperforms the passenger business in traffic growth, yield growth, load factor and daily utilisation.

In early Sep-2013, IATA described the outlook for air freight markets as “cautiously positive” amid signs that a cyclical recovery in demand may be starting. Indeed, this optimism has been echoed in comments from Turkish Cargo and Lufthansa Cargo anticipating better conditions in 4Q2013 and 2014.

That may be so, but major structural reforms are going to be essential in a sector that fails to fill even half of the capacity it supplies into the marketplace.

Modest return to positive growth for first seven months of 2013

The most recent world cargo traffic data from IATA, for Jul-2013, showed some signs of renewed growth. Global freight tonne kilometres grew by 1.2% year-on-year, the fourth consecutive month of positive growth and slightly higher than June’s 0.9%. 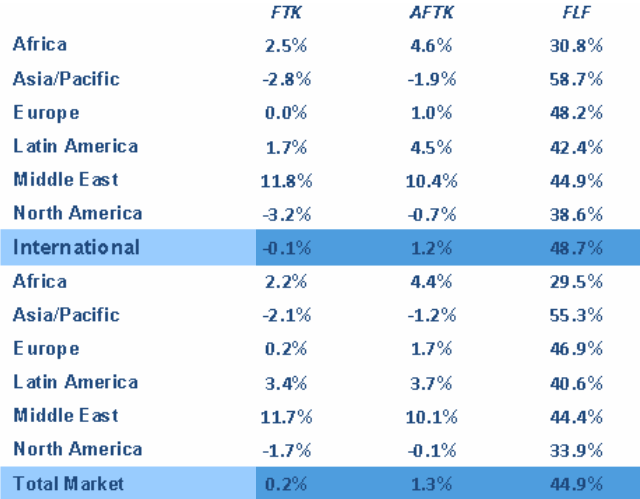 Among the developed regions, Europe saw year to date growth in freight traffic of 1.7% (1.5% in Jul-2013), suggesting that the region’s economic weakness of recent years may be easing a little, while North America’s traffic fell by 1.7% (1.1% in Jul-2013). There have been improved economic indicators in the Eurozone and in the UK recently and an increase in trade volumes in Europe. North American growth rates have been volatile, with no clear pattern, and the US economy has shown signs of improvement with business confidence and new export orders picking up, suggesting freight traffic may fare better in the months ahead.

Looking at air freight traffic growth on the major trade lanes since the trough of the financial crisis in 2009, it was Europe to Far East and the North Atlantic that were hardest hit at that time. In spite of this, these two route areas had the weakest recovery in 2010, when within Far East and North & Mid Pacific led the strong resurgence in cargo traffic. More recently, all the major routes have been close to zero growth, although Europe to Far East has under-performed, while North & Mid Pacific has seen slightly higher growth. 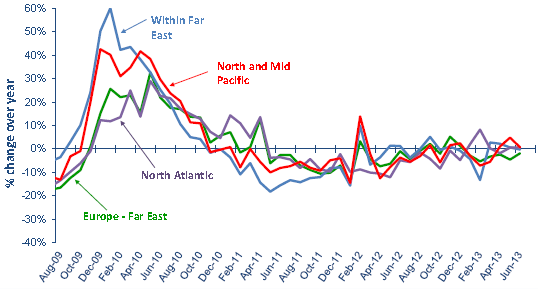 Cargo has lagged passenger growth since 2010

The contrasting performance of passenger and freight traffic since the financial crisis is further illustrated in the chart below. Passenger traffic has enjoyed a consistent recovery since mid-2009, while cargo recovered quickly in 2010 before falling back again and then stagnating for much of the past two years. The trend of recent months looks more positive than it has at any time during this period. 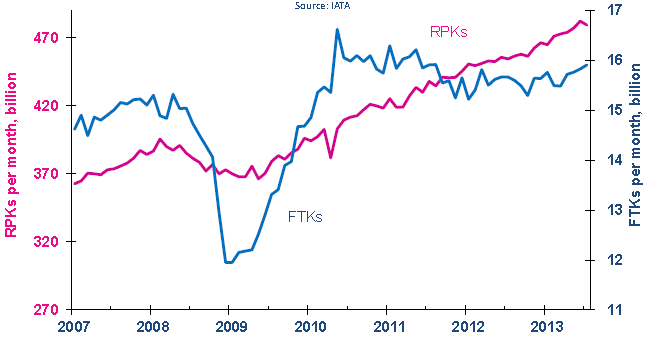 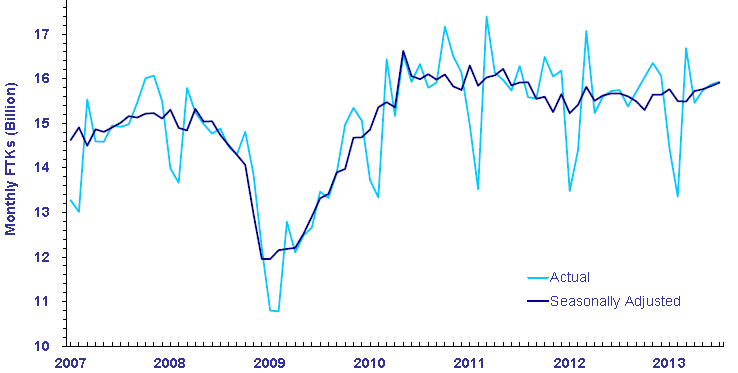 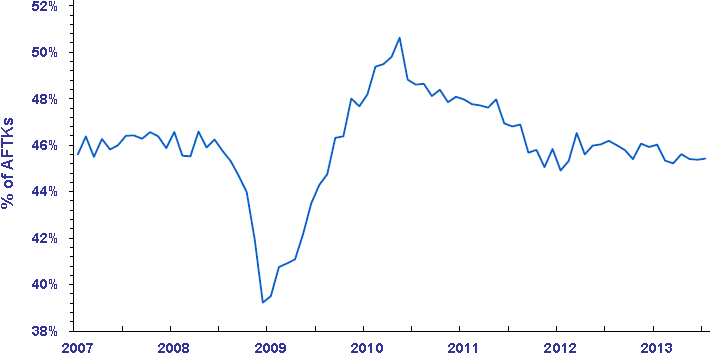 The recent freight traffic volume recovery has not led to load factor gains since freight capacity growth has outpaced demand growth. Jan-2013 to Jul-2013 year to date traffic growth of 0.2% was slower than the increase in capacity (available freight tonne kilometres) of 1.3%. It is striking how frequently monthly capacity growth is higher than traffic growth (in 15 out of the past 19 months, for example).

Moreover, the difference in the absolute levels is striking: passenger load factors are touching 80%, whereas freight load factors are struggling to cling onto 45%. Of course, freight only travels in one direction and this makes it hard to fill both legs of a return flight between regions where the flow of goods is not equal in both directions. Nevertheless, leading airline groups such as Cathay Pacific, Air France-KLM and Lufthansa achieve air cargo load factors in the mid-60s to mid-70s and Korean Air in the high 70s, pointing to the significant room for improvement for the industry as a whole.

Weak load factor is not the only evidence of poor capacity utilisation in air freight. The daily utilisation rate (hours flown per day) of freighter aircraft was between 9.5 hours and 10 hours before the global financial crisis and then plummeted to around eight hours in 2009. After recovering sharply to a new peak in mid-2010 of more than 10 hours, it had fallen dramatically to well below nine hours at the end of 2012. 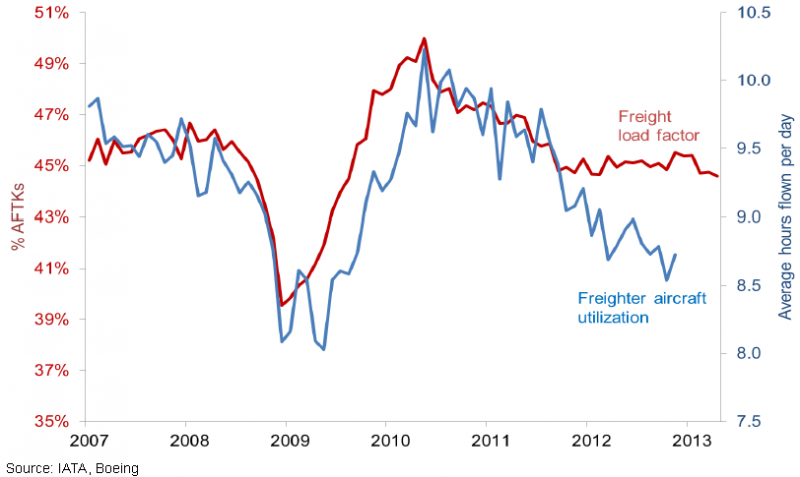 A greater volume of air freight traffic (by FTK) is carried on freighter aircraft than in the bellies of passenger aircraft. Moreover, since the financial crisis, freighter-borne FTKs have grown more quickly than belly cargo, which has been in decline since 2010 (although there are now signs that this decline has halted).

The increase in freight load factor in 2010 (see above) coincided with a cut in the size of the freighter fleet and a jump in demand. Although there was also an increase in the widebody passenger fleet, whose bellies carry most of the world’s air cargo, this was relatively modest compared with the rise in demand. 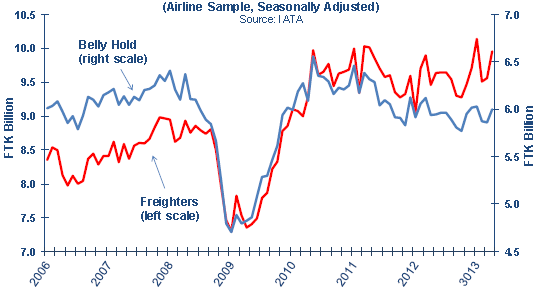 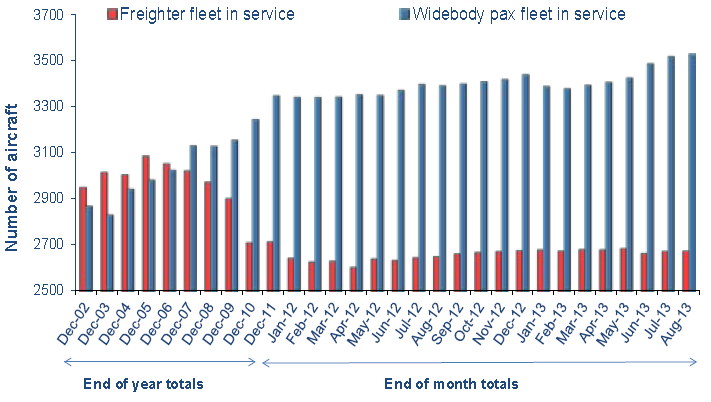 It seems that, although airlines took steps to cut freighter capacity, the growth in their passenger fleets, driven by growing passenger demand, and the accompanying increase in belly freight capacity has countered any positive effect on freight load factor. Furthermore, the freighter fleet has seen further growth since the start of 2012, in spite of the clear overcapacity as evidenced by low freight load factors.

Belly freight is a different matter, as it can be argued that any volume of freight makes a contribution to the costs of operating the passenger aircraft (provided the freight revenue generated covers its handling costs), and the concept of belly freight load factor is more a notional one. Nevertheless, increased belly capacity resulting from growth in the passenger fleet cannot help the overcapacity situation in air freight markets.

This overcapacity in the air freight business has also contributed to weak cargo yield trends. World cargo yield collapsed in 2009, falling 15%, then rebounding strongly in 2010, since when it has underperformed passenger yield growth (it fell by 6% in 2012, according to IATA).

Air freight rates have remained weak into 2013 (as have container shipping rates).

Year on year growth in world cargo yield and passenger yield: 2003 to 2012 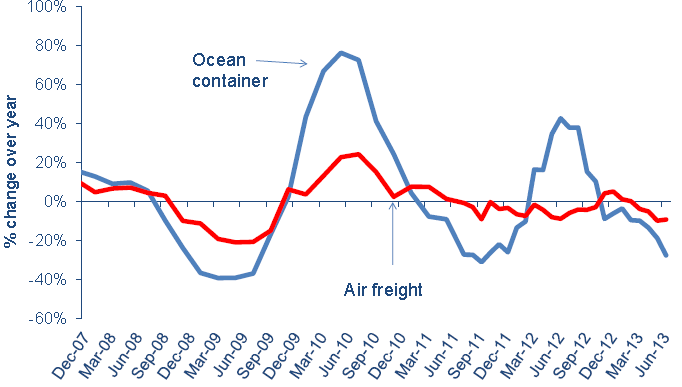 Cyclical recovery on the way

IATA describes the current outlook (2-Sep-2013) for air cargo as “cautiously positive”, citing slight improvements in global business confidence and a pickup in export orders. Against this, it points out that positive economic signals in Europe and the US have not yet led to growing demand for Asian manufactured goods, which will need to strengthen if air freight is to have a more firmly positive second half of the year. 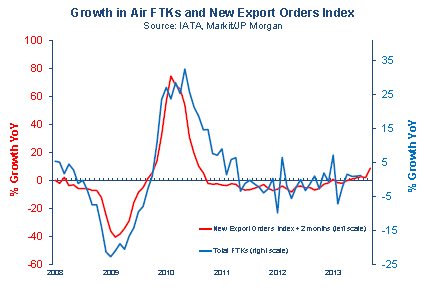 IATA’s cautious optimism appears to be shared by its member airlines, as illustrated by its most recent airline confidence survey in Jul-2013, which points to an expected increase in cargo traffic over the next 12 months, albeit with a neutral yield expectation. 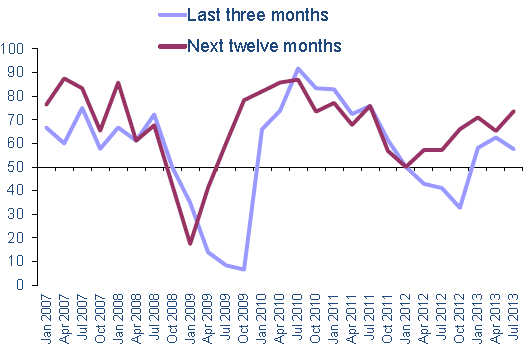 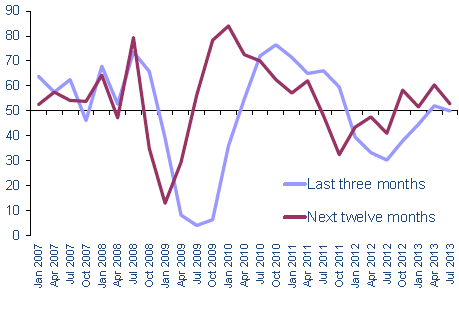 Cargo needs the spotlight of capacity discipline too

Looking into the longer term, the situation has deteriorated so far that it will take much more than a period of more healthy traffic growth to fix a business now characterised by weak demand, too much supply, poor capacity utilisation and soft yields.

The airline industry needs to confront the problem of its very weak freight capacity utilisation and question the use of freighter aircraft. The majority of these may be conversions of old passenger aircraft that are almost fully depreciated, but they still need to be financed, fuelled and crewed. Flying them less than half full cannot be satisfactory. They should at least be limited to routes that have a more even two-way balance.

The industry that seems to have understood the need for capacity discipline in the passenger business still has room for improvement on the cargo side.

If freighter aircraft cannot be filled in both directions and yields are low, why operate them?