Air France-KLM: over half way through 'Transform 2015' plan, "additional measures" are still needed

Air France-KLM reported its first positive second quarter operating result for five years as its Passenger segment enjoyed a return to the black, although medium-haul is still loss-making. Low-cost subsidiary Transavia, which now accounts for one fifth of the group’s narrow-body fleet, cannot seem to break into profit despite impressive load factors and growth in capacity and revenues.

In spite of the growing use of Transavia, the creation of French regional airline subsidiary Hop and the provincial bases project in France, the group’s medium-haul business will struggle to meet its 2014 breakeven target. The Cargo division also remains loss-making in spite of capacity cuts.

Although previously announced initiatives of the group’s Transform 2015 restructuring plan are on schedule, Chairman and CEO Alexandre de Juniac is considering additional measures to improve results in medium-haul and Cargo. These will be outlined at the end of Jul-2013 and announced in detail by Oct-2013. More than half-way through the restructuring programme, the more radical steps may still lie ahead. 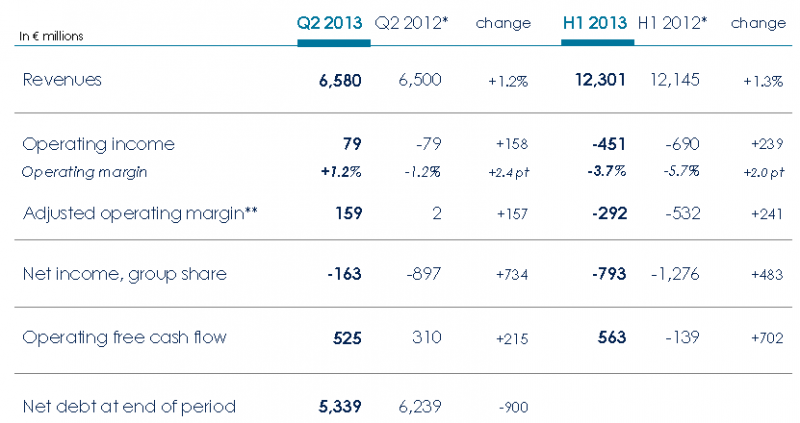 This was the group’s first profitable second quarter in five years, but much of the improvement in the operating result can be attributed to lower fuel costs, which fell by EUR146 million in 2Q and by EUR160 million in 1H, reflecting lower prices for jet fuel.

See related report: Air France-KLM: why it must Transform, as medium haul and cargo operations hurt the bottom line

Revenue growth of 1.2% was mainly driven by the Passenger segment, which accounted for 78% of group revenues in 2Q2013. By contrast, the Cargo segment continues to struggle, with revenues down 7.7%. Growth in Maintenance revenues of 20% reflected increased third party business. The Other businesses segment saw revenues up 16%, mainly driven by low cost carrier subsidiary Transavia. 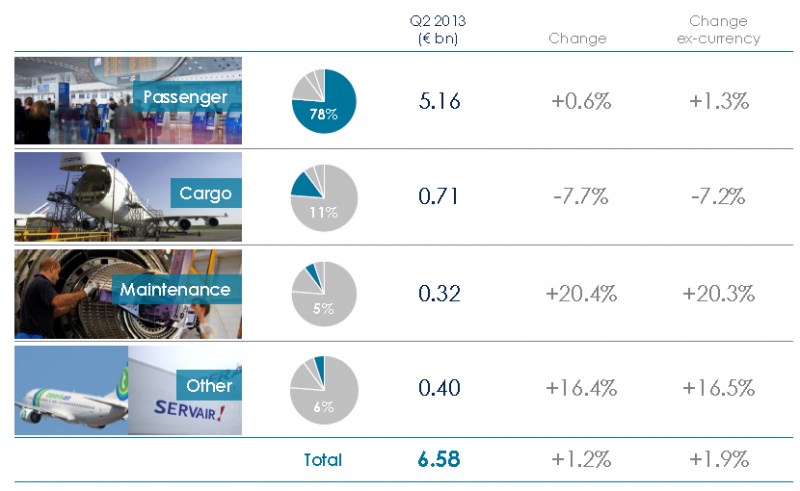 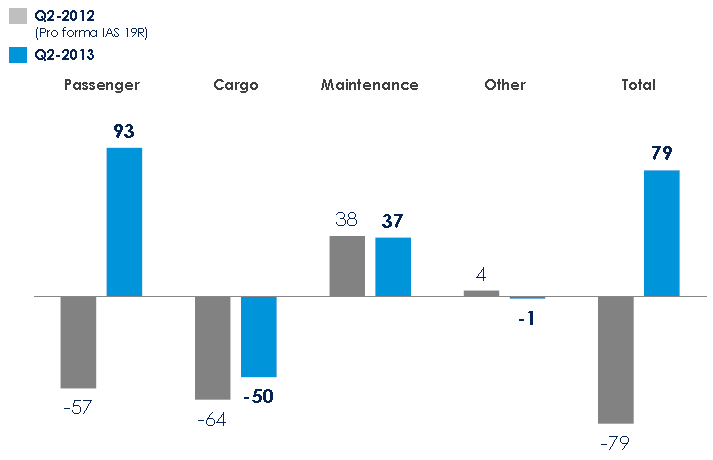 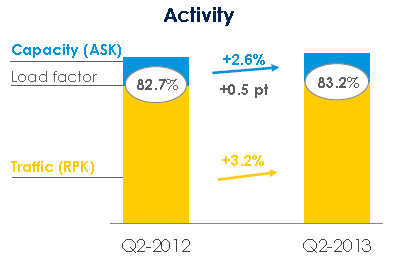 Unit revenues were stable in medium-haul (+0.7% ex currency), but long-haul RASK ex currency fell by 1.3%, with a fall of 1.7% in premium and 0.9% in economy. RASK was weakest in Asia and Africa/Middle East. Air France-KLM attributes this long-haul RASK decline partly to record high long-haul RASK in 2Q2012 and also to weakness in Japan, capacity increases in Africa and the “geopolitical situation” in the Middle East. Weak RASK in Asia is also due to competition from Asian and Gulf carriers. 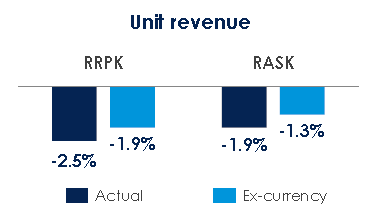 Cost per ASK in the Passenger segment fell by 4.9% in 2Q2013, helped by lower fuel prices, but the fall of 2.5% at constant currency and fuel was still a creditable result.

The 2Q2013 capacity cut in cargo of 4.2% was focused on the group’s dedicated freighter aircraft, whose capacity was down by 18.3% year on year. Air France-KLM says that the context for its cargo activities remains one of weak global trade and industry overcapacity. 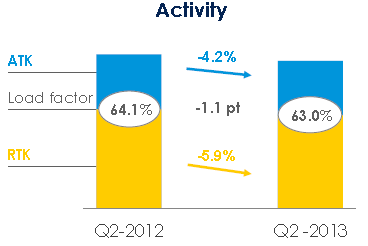 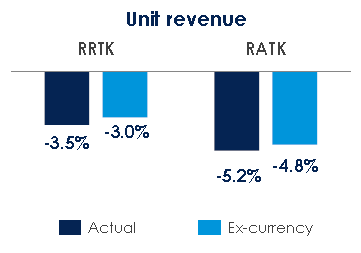 In the Maintenance division, third party revenues grew by 20% year on year in the quarter, helped by new engine contracts and growth in volumes in Air France-KLM’s GE contract. It also won new contracts in its component business.

Nevertheless, its operating result was just below stable year on year at EUR37 million (EUR38 million in 2Q2012), affected by a reduction in the work done on its own fleet.

Employee costs were down as headcount reduces

Under the Transform 2015 plan, the group aims to reduce employee costs by EUR400 million between 2012 and 2014 (excluding the non-cash increases in pension charges and the integration of Airlinair). It is on track to achieve a reduction of EUR200 million this year. On a like-for-like basis, headcount has fallen by 5,600, or 5.3%, since Jun-2011 across the group.

At Air France, agreement over headcount reductions has been reached, and cuts are underway, with ground staff and pilots. Ground staff cuts of 1,700 out of an approved target of 2,880 have already been achieved, as have pilot headcount reductions of 160 out of 270. A target to reduce Air France cabin crew by 500 is still the subject of discussions with employees. Any redundancies will be on a voluntary basis. 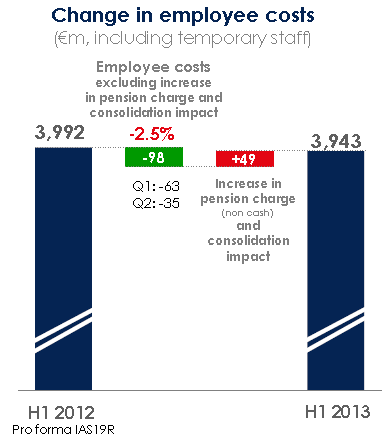 Fuel costs down; other costs slightly up

Fuel costs, the second largest cost category, fell by 4.5% in 1H2012 in spite of capacity increases, reflecting lower prices. Total costs fell by 0.6%, but ex fuel costs were up slightly, by 0.8%. The increase in costs was mainly due to maintenance costs increasing in line with increased third party maintenance revenues. Costs per EASK (a measure which combines passenger and cargo capacity) fell by 3.1%, or 2.1% excluding fuel and currency. 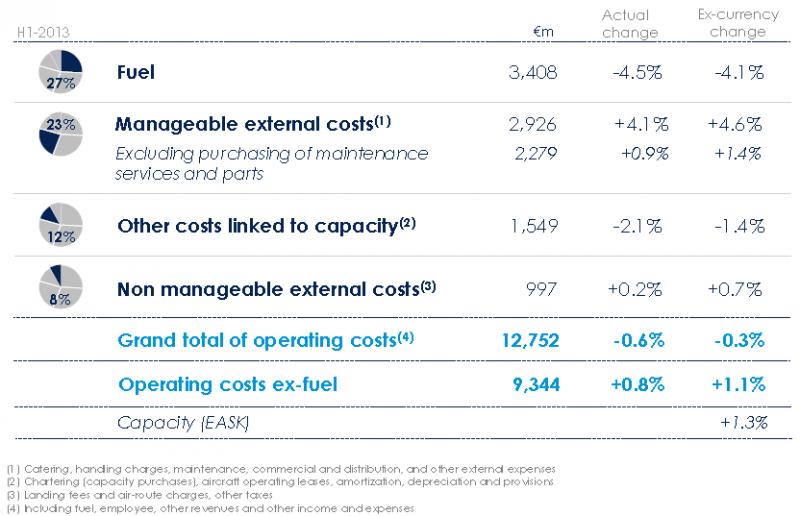 After rapid growth, Transavia had 32 Boeing 737s in the Netherlands and 11 in France at 30-Jun-2013. In total, its 43 aircraft account for almost 20% of the group’s narrow-body fleet and a higher share of its short/medium-haul ASKs (reflecting greater seat density and better load factors).

Transavia traffic and financial results 2Q and 1H2013 versus 2012

Load factor gains helped to offset a fall in yield (revenue per RPK was down 3.7%), so that RASK increased by 1.1%.

This suggests that Transavia owes some of its traffic and revenue growth to price discounting, not unexpectedly perhaps, given its start-up-like nature on some routes and its rapid capacity expansion. With little scope for further load factor gains, Transavia will hope that it can continue to grow RASK without discounting yield.

More worrying for Transavia is that, unlike the main Passenger segment, CASK also grew and its growth rate of +1.8% outstripped growth in RASK. CASK at constant currency and fuel price actually fell (-0.8%) and so, given the fall in fuel prices, the difference in these two figures this suggests that currency movements had a particularly negative impact on Transavia’s CASK. The reason for this is not clear.

Increasing use of Transavia France is one of the cornerstones of Air France-KLM’s strategy to turn around its short/medium-haul passenger business. Other aspects of the short/medium-haul turnaround plan are a reduction in Air France’s narrow-body fleet by removing 16 Airbus aircraft (from 135 in summer 2012 oto 119 in summer 2013); the densification of KLM’s 737 fleet; the transfer of Air France’s regional businesses into the newly established Hop (with a reduction of 15 regional aircraft this summer); and changes to the French regional bases project, which was originally intended to lead to growth through lower fares and higher productivity, but where capacity is being reduced (and unit revenues are consequently improving).

Although Air France-KLM management says that the operating result of its short/medium-haul business is improving, Transavia’s widening losses and unit cost increases suggest more needs to be done. Indeed, group Chairman and CEO Alexandre de Juniac admitted to analysts at the 2Q2013 results presentation that the breakeven target set for short/medium-haul in 2014 is “very challenging”.

As a result, in 2014, “additional measures” will be taken to improve results. These measures will include cost reduction initiatives, including a redundancy plan to implement further headcount reductions; “industrial projects”, which will involve reallocating capacity between Air France, Hop and Transavia; and commercial initiatives.

These measures are currently being reviewed and outline announcements will be made at the end of Jul-2013, before detailed plans are announced and submitted for consultation to the Works Council by 1-Oct-2013. Similar steps are in progress to improve the situation of the Cargo business.

It seems likely that we can expect further overall capacity reduction in both the short/medium-haul passenger business and in cargo. Air France-branded passenger flights can be expected to bear the brunt of any capacity reductions, while Hop and Transavia will probably grow further.

In the cargo business, additional cuts to the full freighter fleet – or, possibly a total withdrawal of dedicated freighters – may be on the agenda, with cargo retrenching into passenger belly capacity. Meanwhile, CFO Philippe Calavia told Bloomberg that a sale of the Cityjet regional airline subsidiary (not part of Hop) is close to conclusion.

This figure compares favourably with last year’s loss of EUR353 million, but is significantly lower than the median forecast operating profit of EUR318 million currently expected by analysts following Air France-KLM (source: Air France-KLM investor relations web page). Given the challenges and uncertainties across the group, management may be right to be cautious over its FY2013 target.

However, its FY2014 target EBITDA of between EUR2.5 billion and EUR3 billion implies an operating result of around EUR900 million to EUR1.4 billion. This will need a much bigger improvement in 2014 than in 2013. When the “additional measures” are outlined in late Jul-2013 and detailed this autumn, there will be little room for caution. The future is nearly here.

See related report: Air France-KLM: it may be unfair to compare its 1Q2013 with Lufthansa's, but…