International Airlines Group: 2015 target raised thanks to BA & Vueling; Iberia still has work to do

As CAPA predicted, IAG increased its operating profit target for 2015 at its recent capital markets day. This reflects better progress than previously expected at British Airways, the integration of Vueling into the group and additional growth at both BA and Vueling.

The increase in the BA target, translated into EUR, is more than the increase in the group target. The implicit reduction in the Iberia target increases the pressure on its restructuring programme to create a competitive cost base. Nevertheless, the group as a whole now faces the real prospect of generating a return on capital ahead of its cost of capital.

At its annual capital markets day on 15-Nov-2013, IAG announced the following targets for the group: 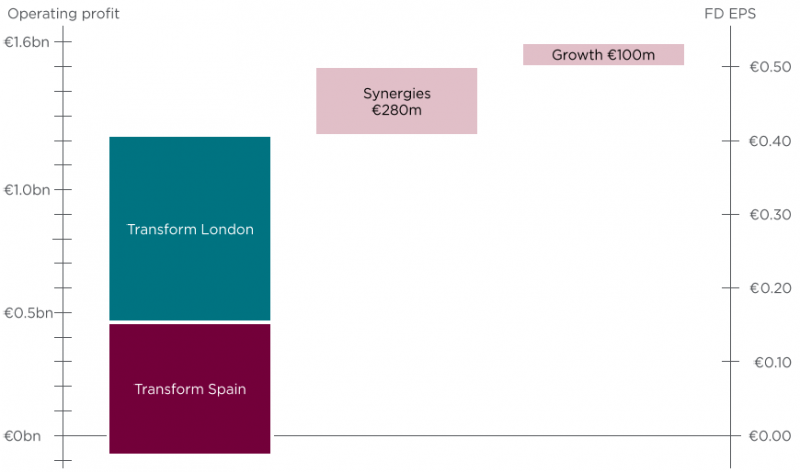 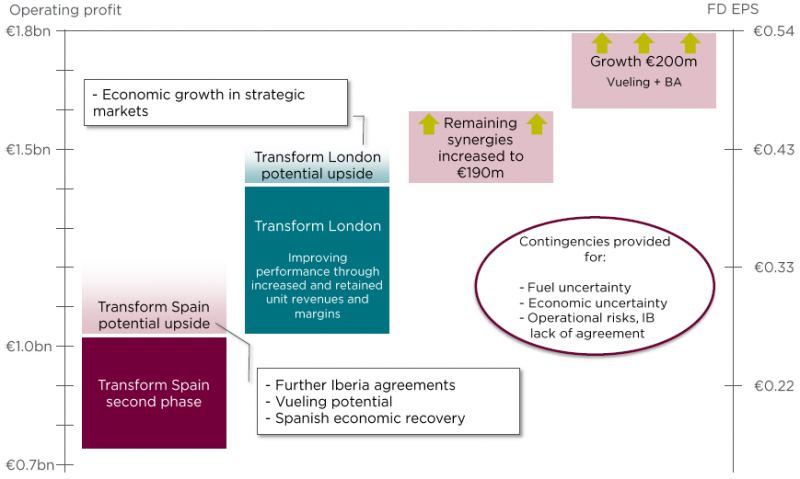 The EUR1.8 billion operating profit target is designed to allow IAG to generate a return on invested capital (ROIC) that beats its weighted average cost of capital. At the capital markets day, IAG CEO Willie Walsh stressed that ROIC is the key parameter in any investment decision for the group, describing this as “the principle we want embedded in the business”.

IAG has calculated that its pre-tax WACC is around 10%, assuming a cost of debt of 5%, a cost of equity of 15% and a target gearing ratio (debt to total capital employed) of 50%. In order to ensure that it can beat its WACC, IAG is setting a target ROIC for all investments, and for the group as a whole, of 12%.

IAG judges that its typical annual capital expenditure will be in the region of EUR2.0 billion to EUR2.2 billion. This is based on a EUR27 billion notional replacement cost of its tangible fixed assets, a 4.5% annual replacement rate (implies 20-25 year life for its assets) and a 3% growth rate.

IAG has increased its target for British Airways' 2015 operating profit target from GBP1.1 billion to GBP1.3 billion, following its achievement of improved margins in 2013. The additional GBP200 million now expected in 2015 is split between non-fuel costs (GBP70 million) and network and product enhancements (GBP130 million).

BA’s planned ASK growth of 6% in 2014 looks a little aggressive at first glance and is faster than likely market growth (IATA forecasts 5% growth in both ASKs and RPKs for Europe in 2014). Some of this growth (1%) comes from planned new long-haul destinations, some (1.5%) from larger aircraft and 2.8% comes from growth in the core network.

There is also a contribution of 0.5% each from BA taking on capacity from American Airlines under the trans-Atlantic JV and from short-haul growth. There is a small reduction in ASKs (-0.3%) from the suspension of some long-haul markets. Overall, the planned growth of 6% does not look to be too fast when analysed into these component parts, but BA will need to be flexible if markets turn down for any reason. 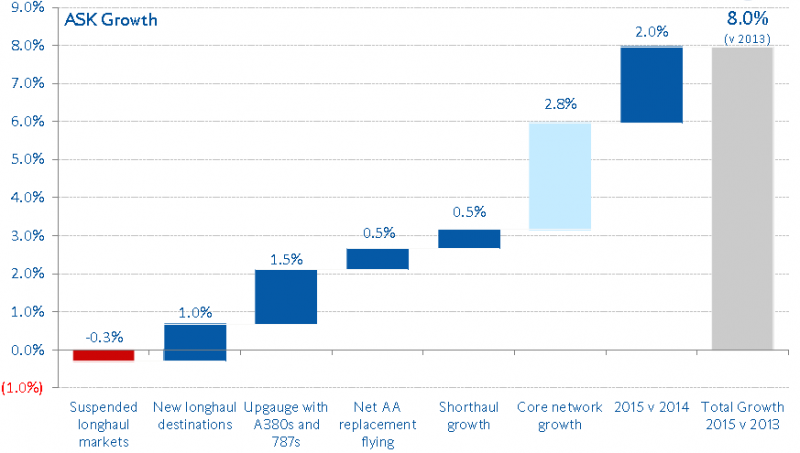 If BA achieves this, its 2015 revenue figure will be somewhere approaching GBP13 billion and so its new target operating profit figure of GBP1.3 billion will represent an operating margin in the region of (or slightly more than) 10%. This would equal BA’s highest ever operating margin (at least since its privatisation in 1987).

See related report: British Airways: the parental favourite gets new toys, but still has homework to do 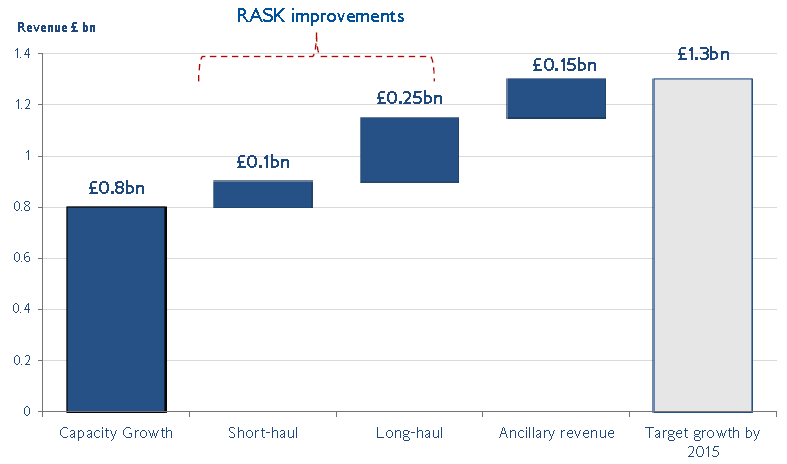 IAG says that Iberia’s recovery plan is on track and that further improvement is expected. IAG’s tone remains a little more circumspect when it comes to Iberia and it has not publicly announced an operating profit target for its Spanish FSC subsidiary. The focus remains to restructure Iberia’s cost base in accordance with its Transformation plan.

Although not explicitly stated, the revised IAG Group operating profit target implies a lower target for Iberia. In spite of progress with its restructuring, Iberia’s headcount reduction under the mediator’s plan will be lower than originally planned and this leaves a cost reduction shortfall. There may be scope to recover the impact of this shortfall through higher unit revenues, but this is not in the new target.

Iberia’s RASK and CASK discounts are not symmetrical

According to data presented at IAG’s capital markets day and sourced to McKinsey, Iberia has a 25% RASK discount to peers on long-haul, but only a 10% discount in CASK ex fuel. On short-haul, its RASK and CASK ex fuel are both 15% below legacy carriers. The problem on short-haul is that its CASK ex fuel is 40% above LCCs, but its RASK is only 15% above LCCs, according to the same set of data (note that these figures are adjusted to average stage length of 6,000 km for long-haul and 1,000 km for short-haul).

Iberia’s Transformation plan has focused on capacity reduction, headcount reduction and labour productivity improvements through the mediation agreement, a commercial plan to boost RASK and productivity programmes in non-core business. By its own admission, Iberia has not yet fully achieved the competitive cost base necessary before IAG can commit to investment in long-term growth. 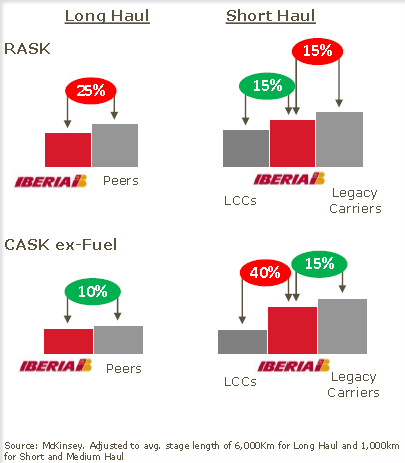 Iberia management’s current focus in its negotiations with the work force has a number of elements. In the core flying business, it continues to seek measures to bring crew productivity up to market levels; it is proposing new salary rates; and it is looking to remove current restrictions on cost efficient growth at Iberia and Iberia Express in short-haul. In addition, it is in talks with ground personnel over ensuring the competitiveness of its ground handling and maintenance divisions.

Iberia sees growth prospects in all geographical markets and believes that it has strategies to capture this growth. In short/medium-haul markets (domestic, Spain to Europe, Spain to Middle East) its approach is to leverage its competitive cost base to add new destinations, focusing on both point-to-point and Latin America connections. It is exploring further opportunities in Africa and will look to deepen oneworld relationships to begin to build a presence in Asia (but has no current plans to use its own aircraft in Asia). On Spain to USA, the focus is on the JV with American Airlines, BA and Finnair. 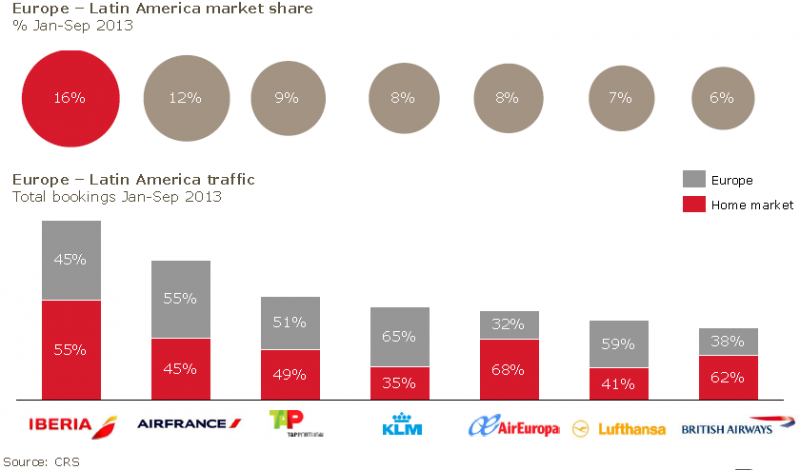 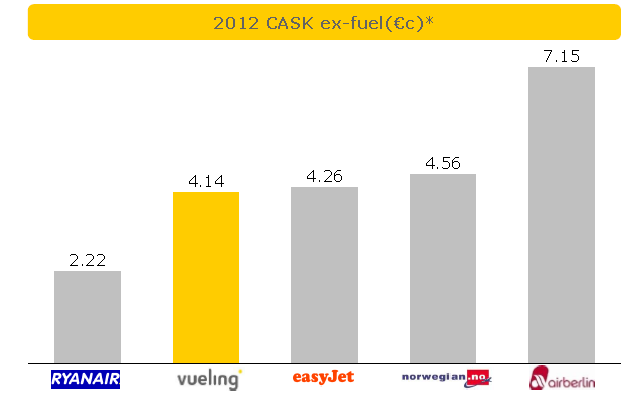 Following Vueling’s Apr-2013 acquisition by IAG, this has given the group the most significant and cost-effective LCC operator among Europe’s Big Three flag carrier groups. Developing from a Spain-centric background, Vueling is expanding capacity across the rest of Europe, where it plans to have 76% of its ASKs in 2015, up from 62% in 2012.

This will give IAG a substantial presence in the pan European LCC segment. The key tension it will have to manage is to allow Vueling the freedom to grow independently and without being unnecessarily tainted by the higher-cost culture of its FSC parent, while ensuring that it does not cannibalise sales of its FSC sister companies in Spain and the UK. 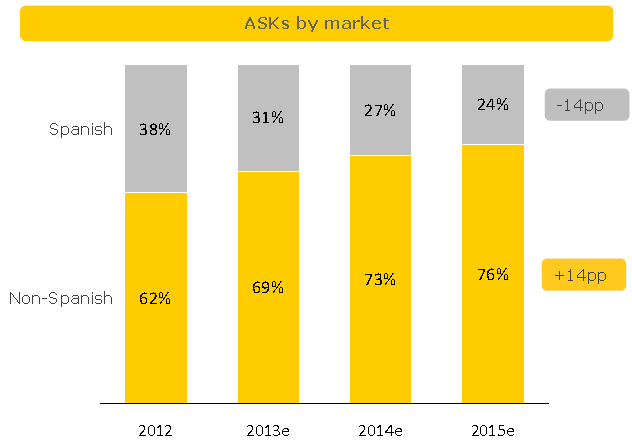 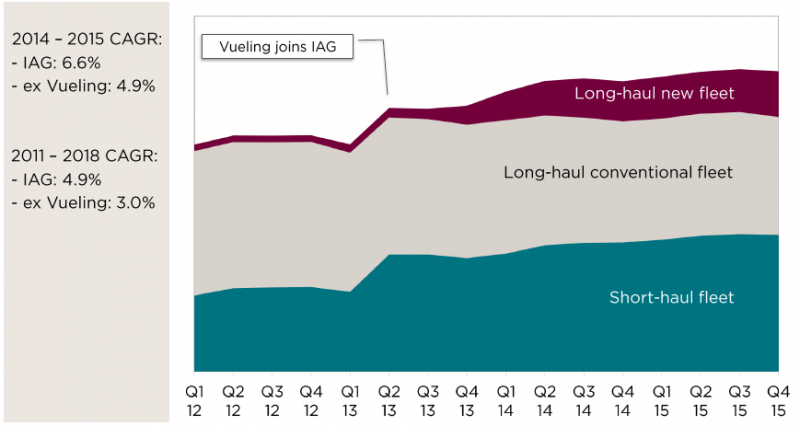 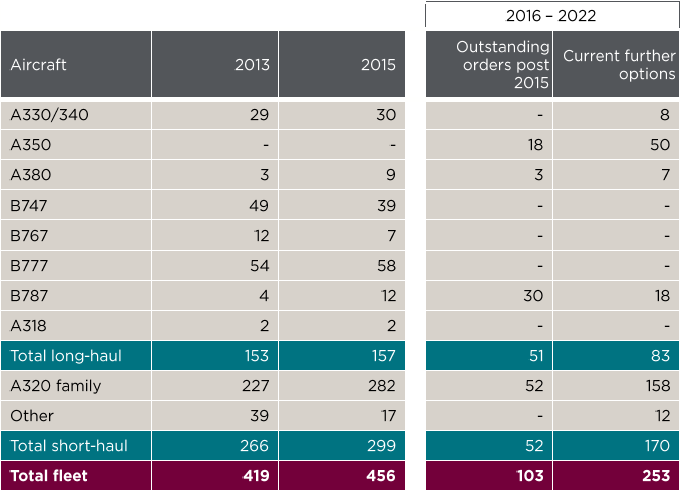 On short-haul, the fleet will remain broadly stable in terms of total number of aircraft, with A320 deliveries and 737 and 767 retirements. There will also be three more Embraer regional aircraft for London City. Short-haul ASKs will increase by 2% in 2014 and 6% in 2015, partly through increased seat density. 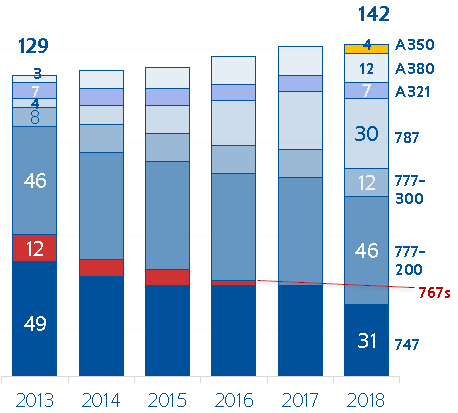 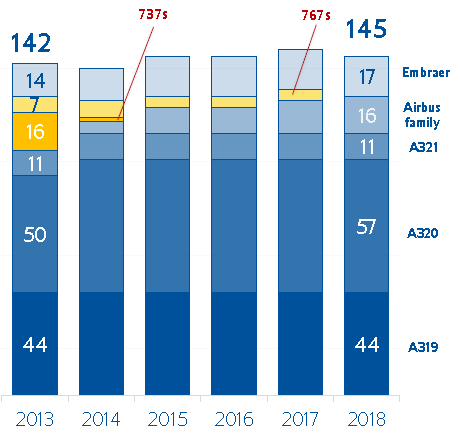 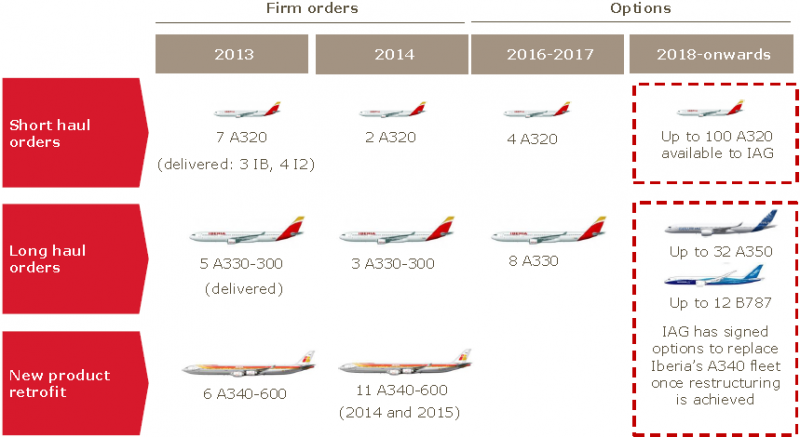 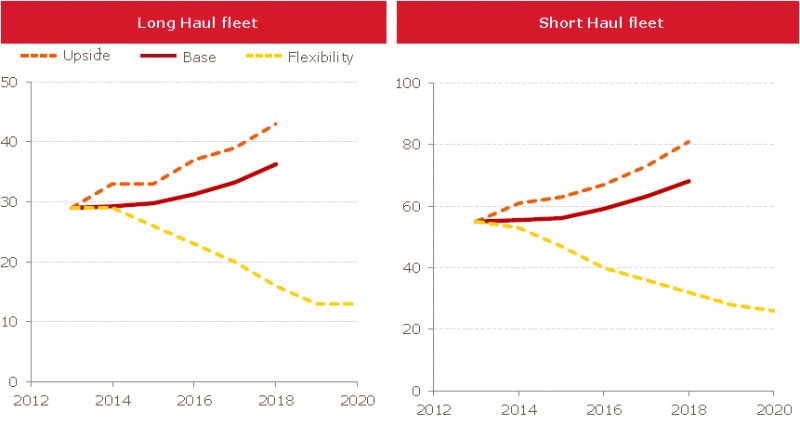 Vueling now plans to growth its fleet from 70 aircraft this summer to more than 100 in 2015, but this could be as low as 43 aircraft if no leases are extended. 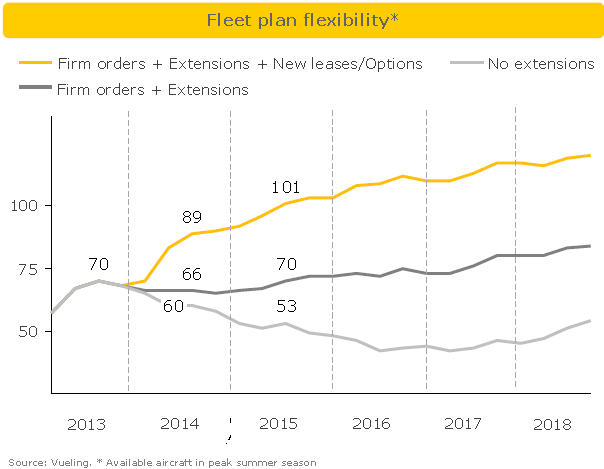 IAG’s planned annual capex rate of EUR2 billion to EUR2.2 billion is consistent with CAPA’s prediction in our report of 6-Sep-2013, when we said that “IAG’s capex looks set to remain in the region of EUR2 billion per annum from 2013 until at least the end of the decade”. From 2011 to 2015, it will have spent a total of EUR7.1 billion in capital expenditure. 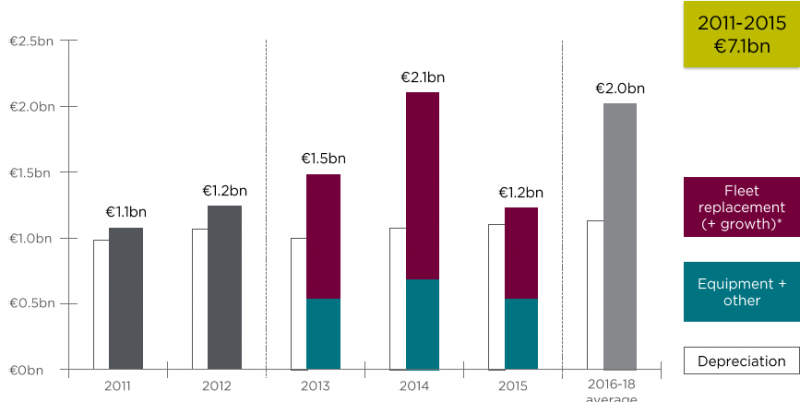 As a final target in its capital markets day communication, IAG committed to providing “market level returns for our shareholders”. If it can sustain this year-in, year-out, it could become a rare example of a legacy airline group (albeit one with a low-cost carrier acquisition on board) that covers its cost of capital through the cycle.

This would be a very creditable achievement: the last time that British Airways achieved a 10% operating margin and covered its WACC was the financial year ended Mar-2008 (in its pre-IAG days).

The very next year, the global financial crisis erupted and BA plummeted to its worst-ever operating margin of minus 2.9%. Nothing can be taken for granted in an industry where so much is not controllable. At least IAG seems to be concentrating its efforts on what is controllable. And with some success. Its two major European competitors would love to be doing the same.