Low-cost carriers are starting to slowly – very slowly – penetrate Africa’s regional international market. LCCs currently only account for about 0.2% of international capacity within Africa, making it one of the last frontiers for the global LCC sector.

Tanzania-based LCC start-up fastjet finally launched services from Dar es Salaam to Johannesburg on 18-Oct-2013, completing a tedious delay-ridden process. It is the first of several planned international routes for fastjet from Tanzania and other potential new bases throughout Africa.

Incredibly there are currently only five international routes within Africa operated by LCCs. The opportunities for LCCs to penetrate the intra-Africa market are huge but so are the challenges.

On 18-Oct-2013 fastjet became only the third LCC to operate international services within Africa, joining sister carrier Fly540 Kenya and South African Airways (SAA) subsidiary Mango. The three carriers combined now provide about 4,000 weekly seats in the intra-Africa international market, which is equivalent to approximately a 0.2% share of total capacity.

Mango has been operating two weekly services from Johannesburg to Zanzibar in Tanzania since early 2013. In Sep-2013 the route was upgraded from regular charters to scheduled services, marking the first time Mango has had a scheduled international operation since launching in 2006. Mango competitor Kulula, which launched domestic services in 2001 and is Africa's largest LCC based on current total seat capacity, currently does not operate any international routes.

Johannesburg-Zanzibar was previously served by another South African LCC, 1time, which ceased operations in Nov-2012. 1time also had served two other international routes, Johannesburg to Livingstone in Zambia and Mombasa in Kenya.

So far this year LCCs have accounted for about 11% of total capacity (domestic and international) within Africa. This compares to a system-wide LCC penetration rate of about 37% within Europe, 30% within North America, 34% with Central/South America and 24% within Asia-Pacific, according to OAG data. 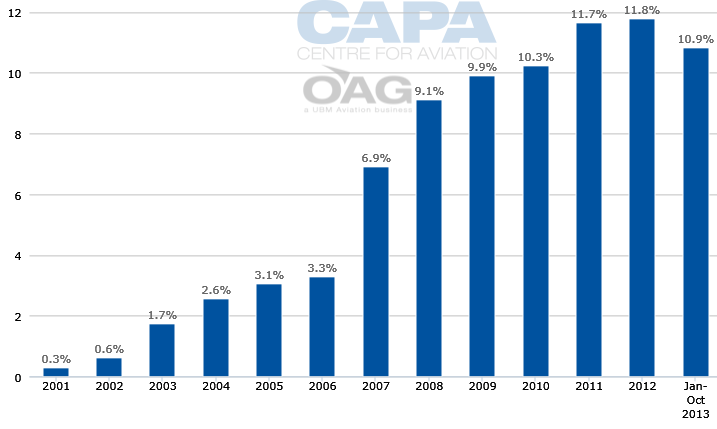 Note: * for 2013 figure for first 10 months of the year is provided
Source: CAPA – Centre for Aviation with data provided by OAG

Almost all of the LCC capacity within Africa is domestic South Africa. LCCs currently account for about 40% of domestic capacity in South Africa. fastjet is one of several companies that has been looking to launch a South African low-cost carrier since the collapse of 1time and a smaller and shorter-lived LCC, Velvet Sky, in 2012.

A much smaller share of the total LCC capacity within Africa comes from fastjet’s domestic operation in Tanzania. fastjet launched domestic services in Nov-2012 with a fleet of two A319s, taking over routes previously operated with regional aircraft by Fly540 Tanzania. A third A319 was added shortly after its launch and fastjet has since repeatedly delayed fleet expansion.

fastjet’s initial fleet plan envisioned 15 aircraft by the end of 2013. fastjet still expects to eventually reach 15 aircraft but it will end 2013 with the same number of aircraft it started the year with – three.

While fastjet has started to achieve in recent months respectable load factors and average fares, Tanzania’s domestic market is not large enough to support an LCC. The carrier currently has 41 weekly return flights in the domestic market, including 21 on Dar es Salaam-Mwanza, 14 on Dar es Salaam-Kilimanjaro and six on Kilimanjaro-Zanzibar. As a result its three A319s have been utilised on average less than five hours per day.

The launch of Mbeya will not significantly improve utilisation, an important component of the LCC model, as it will only be served with three weekly flights. fastjet could not initially serve Mbeya as the airport was only recently upgraded to accommodate jet operations. There are no other airports in Tanzania that can handle jets, limiting domestic expansion opportunities.

fastjet is confident it can expand domestically in Tanzania over time by adding frequencies across its four existing routes but it acknowledges it needs an international operation to survive. “Clearly the whole model is not based on three domestic routes. International routes are absolutely key to the model,” fastjet CEO Ed Winter told CAPA in a recent interview.

fastjet is planning to launch several additional international routes from Dar es Salaam over the next few months which will at least initially be operated using the current three-aircraft fleet as the carrier for now has no timetable for adding a fourth aircraft. Mr Winter also expects Dar es Salaam-Johannesburg will soon be able to support a daily service, up from the three weekly frequencies launched on 18-Oct-2013. The anticipated daily Johannesburg service along with the new Mbeya flight is expected to push up the average utilisation of two A319s to up to 12 hours per day with the third aircraft set aside as a spare.

Utilisation of the third aircraft should increase to similar levels as more international routes are added. The third aircraft has so far been used as a spare, enabling a high level of reliability which is unusual for Africa but also highly unusual and cost prohibitive for an LCC.

Mr Winter says Dar es Salaam to Lusaka, Zambia, is in line to be fastjet’s second international route and is ready to be launched as soon as the carrier decides on a commencement date. Dar es Salaam-Lusaka has not been served non-stop since Tanzania’s Precision Air Services suspended services earlier this year, leaving most passengers travelling between the Tanzanian and Zambian capitals to have to fly via Nairobi or Johannesburg.

Mr Winter says that fastjet is also planning to serve Lilongwe in Malawi, Entebbe in Uganda, Juba in South Sudan and Nairobi and Mombasa in Kenya. Lilongwe, Juba and Mombasa are not currently served by any carrier from Dar es Salaam. The Dar es Salaam-Entebbe route is only served by Air Uganda with one daily regional jet service. 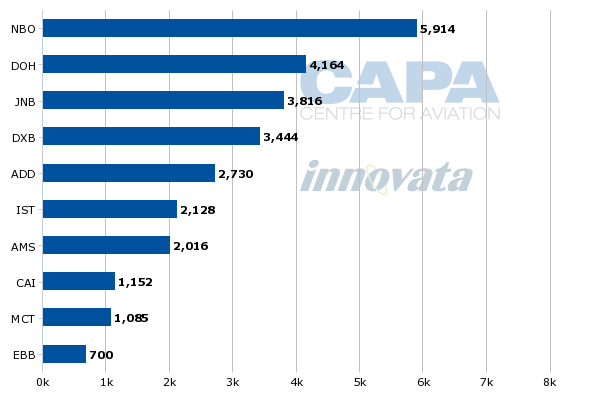 Kigali in Rwanda was also one of the original international route designations secured by fastjet from Tanzanian authorities. But Mr Winter says fastjet had decided against Kigali as it is a very expensive airport to operate into due to there being only one ground handling supplier. The small size of the market is also challenging. Kigali is currently served from Dar es Salaam by Rwandair with six weekly regional jet flights, according to Innovata data.

For the two Kenyan destinations (Nairobi and Mombasa) service from Kilimanjaro and Zanzibar as well as Dar es Salaam is part of the business plan. Fly540 Kenya now operates some of these routes but currently does not serve the main Nairobi-Dar es Salaam market. fastjet expects to eventually restructure, take over and re-brand Fly540 Kenya’s domestic and international operation, following the model it used initially in Tanzania. A319s will be brought in, replacing the current fleet of regional aircraft although the A319s will not be able to access some of the smaller domestic markets.

Tanzanian authorities have already designed fastjet for all its planned new international markets – Kenya, Malawi, South Sudan, Uganda and Zambia. Service to Johannesburg, which fastjet sought to launch first as it is the largest potential market, proved to be a long drawn out battle when it came to securing all the required authorities from the South African end. Mr Winter acknowledges fastjet would have ideally launched Johannesburg service a year ago but he is confident all the other identified routes can be finalised quickly. Fastjet sees launching services to South Africa as an important milestone and setting the tone for more international expansion.

However, most African countries continue to jealously guard their bilaterals and protect government-owned airlines. Over time the barriers will be lifted. The question is how long will it take and if fastjet, which has incurred large losses over the past year and has identified itself as a “going concern,” will survive long enough to see the market sufficiently open up.

fastjet expansion could lead to response from SAA and Mango 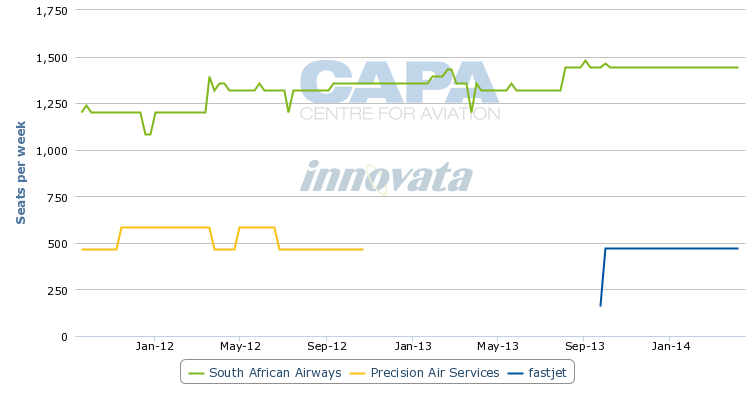 SAA is expected to monitor the route closely as fastjet adds capacity and could eventually hand one of its daily flights to Mango should it need to significantly cut its fares to compete. For now SAA’s strategy does not involve Mango operating in any regional international route served by SAA. Instead Mango is planning to pursue conservative international growth and stick to developing leisure routes which SAA does not serve such as Johannesburg to Zanzibar and Kilimanjaro.

Having to compete against fastjet on the Johannesburg-Dar es Salaam route represents just the first taste of LCC competition for SAA in South Africa’s high yielding short-haul international market. There are currently about 150,000 international seats within the southern Africa region. SAA is the market leader with about a 38% capacity share. This market is not currently served by a single LCC despite being purely a short-haul market.

The new South African LCC plans to initially serve the domestic market, providing new competition to Mango and Kulula. But the carrier is keen to quickly start tapping the short-haul international market, where it sees huge opportunities to stimulate demand.

Mango and Kulula have so far been reluctant to pursue international expansion. fastjet has a different perspective as it does not have a full-service unit to protect. While Mango is owned by SAA, Kulula parent Comair also owns a full-service British Airways franchise that operates flights on domestic and regional international routes.

Securing international traffic rights from South African authorities could prove challenging as several of South Africa’s bilaterals are capacity constrained and SAA will likely be given preferential treatment for additional rights. But some markets are open and for others fastjet may be able to enter through affiliates in other countries. As in the case with Tanzania, foreign carriers from other African countries are under-utilising their traffic rights or are not serving South Africa at all.

In addition to Kenya in eastern Africa, fastjet has been looking at establishing affiliates in Angola in southern Africa and in Ghana and Nigeria in western Africa. All these markets are in narrowbody range of South Africa and suffer from very high average fares. fastjet sees an opportunity to get around bilateral restrictions by following the AirAsia model of establishing affiliates in multiple countries.

Ghana and Nigeria, however would require flights near the maximum range of fastjet's A319s. Focusing on linking South Africa with other countries in southern Africa and the south part of eastern Africa (such as Tanzania) would result in flights more within the normal range of narrowbody LCCs.

fastjet is not alone in seeing opportunities to penetrate southern Africa’s short-haul international market. There are several LCC start-up projects that are well into the planning stages including flyAfrica.com and 1time Zimbabwe. SAA’s domination of the market and resulting high fares will weaken over time, although the process will be slow. Fortunately for SAA, the group can always turn to Mango to participate in the inevitable growth that will come when the bottom end of the market finally opens up.

LCCs will gradually succeed at penetrating South Africa’s international market and the broader intra-Africa international market. fastjet’s Johannesburg service is just the tip of the iceberg. But it will likely take several years for the ice that fastjet is slowly chipping away at to melt and for liberalisation to become a reality.