fastjet has suffered a baptism of fire since entering the African market through the acquisition of the Fly540-branded aviation business of British conglomerate Lonrho and a 49% stake in Kenya’s Five Forty Aviation in Jul-2012.

The carrier holds ambitions to establish the first pan-African LCC airline by creating a series of fastjet branded airlines throughout the continent under a common sales and service platform. But a series of setbacks including a bitter legal dispute over the ownership of the Fly540 Kenya interest, unexpected delays in gaining rights to operated international services from its Tanzania home base, attempts to enter the South African market and underperforming Fly540 subsidiaries in Ghana and Angola have all conspired in fastjet posting a USD56 million loss for the 18 months to 31-Dec-2012.

Nevertheless, the company remains confident it will succeed. fastjet executive chairman David Lenigas stated: “The next few months will represent a greater transformation for the Company as we endeavour to further implement and grow the fastjet business model. The board is confident it has the right strategy and team in place to build a successful and profitable future for our shareholders”.

Those investors will be feeling somewhat less secure after London Stock Exchange-listed fastjet’s financial statements for the 18 months to 31-Dec-2012 were marred by a qualified opinion from auditors KPMG warning that there is “significant doubt” that the group could continue to trade as a going concern. The opinion is based on fastjet’s USD56 million net loss, the need for an improvement in trading, particularly through the launch of international services and the need to raise additional funding.

fastjet reported an operating loss of USD30 million for the period, with cash outflows of USD19.1 million.

Revenue for the six months after the acquisition of the Fly540 assets from Lonrho was USD21.1 million of which USD1.5 million is attributable to one month of trading for the fastjet business. This is well down on the USD32 million forecast in the company’s Mar-2013 trading statement which fastjet attributes to a change in accounting treatment for the disputed ownership of Fly540 Kenya and which has instead been treated as an investment rather than a subsidiary.

The directors acknowledge that the “the outlook presents significant challenges” in that the group must increase revenue and control costs, while securing international route rights out of Tanzania is critical to fastjet’s success in a difficult and unpredictable marketplace.

In addition, further funding is required to ensure operations can continue to trade. This could be achieved through further equity raising or selling stakes in the Tanzania and Ghana operations. fastjet has also announced it is in initial discussions with a number of Tanzanian investors to reduce its current 90% shareholding in Fly540 Tanzania. The board says it has a reasonable expectation that fastjet will have access to adequate resources to continue operating for the foreseeable future.

In Mar-2013 the group secured funding of GBP15.7 million (USD23.4 million)  to cover expansion in Africa over the next 12 months through convertible securities issued to Bergen Global Opportunity Fund. As at 30-Apr-2013 GBP13.1 million (USD20.4 million) of this facility was undrawn. fastjet has also raised a total of GBP8 million (USD12.5 million) through share placings since 31-Dec-2012.

fastjet insists that its Tanzanian operations are performing well and the accounts cover a period under which the fastjet brand had been operating for only a month. Sales revenue has increased 62% since launch date to reach USD1.8 million for the month of May-2013. The carrier told Bloomberg that services were covering the direct operating costs of the three leased A319.

Tanzania is currently fastjet’s only operation having launched domestic services from its Dar es Salaam hub on 29-Nov-2012 to Kilimanjaro and Mwanza, replacing Fly450 Tanzania. It will increase its existing fleet of A319 to at least five of the type by end Jun-2013, and up to 15 by the end of 2013. On-going delays in gaining approval to rebrand and implement the LCC model at its Ghana and Angola Fly540 operations, as well as delays in acquiring international traffic rights from Tanzania continue to cast doubt on those growth prospects.

fastjet CEO Ed Winter, however, points to the Tanzanian operation’s high load factors, increasing fares and yields while maintaining service reliability as proof that the fastjet model can work within Africa’s infrastructure constraints.

Load factors on the two original domestic routes between Dar es Salaam and Kilimanjaro and Dar es Salaam and Mwanza averaged 79% in Dec-2012 – the first full month of operation. Similar load factors were achieved in Jan-2013 and Feb-2013. But overall load factors fell sharply to 64% in Mar-2013 and 66% in Apr-2013 when services from Kilimanjaro to Zanzibar and Mwanza were added. Those routes were suspended in Apr-2013 due to low seasonal demand. Zanzibar will be reinstated in Jul-2013.

Average yields have increased along with average fares which are now above USD70, with some seats selling for more than USD170. Ancillary revenue has also grown steadily with more than 40% of passengers paying for an additional service. That number is expected to grow further as more supplementary services are offered over the next year.

Mr Winter reportedly stated that 38% of passengers were first time flyers, demonstrating the potential of the market and the LCC model.

fastjet had been assured by the Tanzanian Government prior to launching services in the country that it would be able to access international traffic rights from Dar es Salaam immediately and the operation had been established and resourced on that basis. In reality obtaining international rights has taken much longer than expected due to bureaucratic and protectionist attitudes in countries that fastjet wanted to operate to, Mr Winter said.

As a result of the delay fastjet has incurred the additional costs associated with underutilised resources in a country were domestic services alone are not viable. fastjet believes that after intensive lobbying in recent months and talks with the Tanzanian Government it will be able to start international operations from Dar es Salaam in the next two months, likely to be to Nairobi and other eastern African destinations.

European tour operator Tui has recently approved fastjet to carry its passengers while the carrier has also signed an MoU with Emirates with a view to feed traffic to the Gulf giant Dubai hub.

Fastjet Holdings has in turn entered into a commercial arrangement with local charter operator Federal Air to operate the fastjet services, initially using a wet leased 737-300 while fastjet gains regulatory approval to introduce its A319 aircraft.

fastjet states that the South African joint venture model, allowing greater local control, may be used in other markets to mitigate many of the issues and delays that have frustrated the carrier’s expansion to date.

The joint venture with FastJet Holdings follows fastjet’s unsuccessful attempt to buy the assets of failed domestic LCC 1time as a means to quickly enter the domestic market, as well as gain access to valuable international traffic rights, which are essential to the carrier’s pan-African network ambitions.

Fly540 in Angola and Ghana have significantly underperformed

The Fly540 operations in Ghana and Angola have all “seriously underperformed”, with losses from continued operations of USD17.8 million in the 18 months to 31-Dec-2012, leading to impairments totalling USD15.9 million and fair value adjustments of USD19 million.

Fly540 Angola has been beset with bureaucratic hurdles including the free movement of money due to Angola Central Bank controls, and lengthy delays clearing aircraft spares through Angolan customs which can result in aircraft being grounded for weeks, leading to operating reduced schedules and lower revenues. Central Bank controls on currency exchange have also resulted in delays in lease payments as well as payments for spares and maintenance, according to Mr Winter.

But the operation has the potential to be profitable and sustainable with Fly540 Angola significantly increasing passenger numbers in the first five months of 2013, Mr Winter says. Passenger numbers increased by 63% between Jan-2013 and May-2013 to reach their highest level since that operation started in Jan-2011. Revenue has also increased 66.5% in the first five months of 2013, suggesting a slight improvement in average fares. No actual traffic or revenue figures were provided in the update.

Fly540 Ghana has encountered a substantial increase in competition on its key domestic route from Accra to Kumasi. While the near 500% increase in capacity has significantly increased the size of the market, it has also led to a large decrease in yields, Mr Winter reported. Ghana posted a tax-paid loss of USD8.4 million in the six months to 31-Dec-2013 on revenue of USD4.2 million.

Incumbent Antrak Air tripled its capacity on the route as well as across its entire network in response to entry from not only Fly540 Ghana, but also Starbow and Africa World Airlines since Nov-2012. 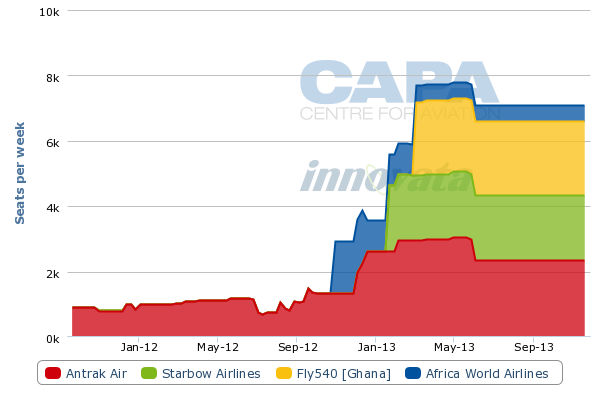 But the Ghana operation appears to be making some progress according to fastjet’s May-2013 operational update which shows bookings on Fly540 Ghana increased 11% compared to Apr-2013 and were up 52% on May-2012, resulting in a 25% increase in revenue. Importantly for the cost sensitive LCC model, web-based sales in Ghana have increased nearly 400% since the start of 2013 compared to the whole of 2012.

Fly540 Ghana operates just one aircraft, an ATR 72-500. International services using an Embraer E170 from Accra to Abidjan, Cote d’Ivoire and Accra to Freetown, Sierra Leone have been discontinued owing in part to the E170 being unserviceable for lengthy periods of time. The aircraft has since been returned to the lessor.

But the West African market and its population of 300 million people remains an attractive and largely untapped market that fastjet will be keen to re-enter at some point, either under the Fly540 brand or as fastjet. In addition to the rights to operate to Lagos, Abidjan and Freetown, Fly540 Ghana also has rights to operate from Accra to Ouagadougou, Burkina Faso and Monrovia, Liberia. “These route rights will be of significant value to fastjet Ghana when the low cost brand is introduced” Mr Winter said.

Cooler heads have prevailed in a legal dispute over the fastjet’s purchase of 49.98% in Fly540 Kenya and whether the acquisition was actually completed. fastjet has entered into an MoU with Fly540 Kenya’s founder and CEO, Don Smith, with a view to resolving the dispute and finding a way for the parties to work together under the fastjet brand in the country.

Faced with the uncertainty of its holding in Fly540 Kenya fastjet threw a lifeline to collapsed local carrier Jetlink Express with an MoU in Jan-2013 to establish a joint venture. Jetlink suspended operations in Nov-2012 after cash flow issues, resulting from being unable to access about USD2 million funds held in a bank in South Sudan.

See related report: Fastjet secures Nairobi base, but expansion in East and South Africa may be on hold

Meanwhile, Kenya Airways is continuing with preparations to launch its own LCC carrier, Jambo Jet which will increase competition and potentially lower fares and yields, making fastjet’s struggle for survival more challenging.

fastjet promises that the next few months will see greater transformation for the company as it strives to implement and grow its business model.

Certainly the carrier will need to demonstrate some tangible successes over the next year, including the launch of regional services from Tanzania and establishing itself in the competitive South African market.

It will also need to find a way to progress the rebranding of the loss-making Fly540 operations in Ghana and Angola and then to link its various operations to establish the pan-African network. This will be no easy feat given the protectionist stance of African governments and their desire to support a national carrier, even if they are loss-making.