FlySafair’s ambitions to launch services on South Africa’s biggest domestic route between Johannesburg and Cape Town from 17-Oct-2013 have been dealt a severe blow by a High Court interdict issued on 8-Oct-2013 restraining FlySafair from operating scheduled domestic passenger services pending a review of South Africa’s Air Service Licensing Council’s (ASLC) decision to grant the carrier a licence to operate.

The interim injunction has stalled, temporarily at least, a looming battle in the South African domestic market into which FlySafair and fellow LCC start-up SkyWise are planning to launch, ending a brief period where the South African Airways and Comair groups enjoyed a duopoly following the demise of LCC 1time in Nov-2012.

Comair, which operates as LCC Kulula, and the full service British Airways franchise combined forces with would-be competitor SkyWise to block FlySafair’s launch by challenging the ASLC’s decision. Comair and SkyWise claim that FlySafair does not meet South Africa’s maximum 25% foreign ownership limit to operate domestic services and that one of its directors is not a resident of South Africa.

FlySafair is an LCC subsidiary of long established broad-based South African aviation company Safair which has been in existence over 40 years, providing aircraft leasing, charter operations, maintenance and training services.

Safair is a subsidiary of Irish ASL Aviation Group which in turn is a subsidiary of its Belgium holding company. FlySafair argues that it meets the minimum 75% South African ownership requirement because its CEO Dave Andrew, CFO Elmar Conradie and non-executive director Hugh Flynn each own 25% of the shares in Safair. Comair, however, argues that the trio were handed their shares by ASL to circumvent the foreign ownership restrictions. It also claimed that Mr Flynn did not ordinarily reside in South Africa.

The High Court found that the evidence indicated a strong probability that the information presented to ASLC in support of the licence application deliberately concealed the true ownership structure of FlySafair.

Judge Neil Tuchten reportedly stated: “The probability is that Safair designed and implemented a scheme which created the illusion that Safair in fact had brought itself within section 16(4) of the [Air Licensing] Act, while in truth it had not.”

Given that it was likely that the ASLC would not have granted the licence had it appreciated the true facts, the interim interdict was granted.

Mr Andrew said in a letter to passengers posted on the FlySafair’s website that the decision was “contrary to our expectations” and the board would review all available options and remained dedicated to launching FlySafair. “We remain confident that the issue will be resolved.”

FlySafair had sold between 2,000 and 2,500 tickets and all passengers were guaranteed a full refund if they did not want to postpone their flight until the carrier commenced operations. However, the Court has also ordered Comair to accommodate FlySafair’s passengers on its own flights on the dates designated on the ticket at Comair’s cost.

FlySafair had intended to operate six one-way frequencies per day using two 19-year old 737-400s and a third in reserve, building to 10 daily frequencies in Nov-2013. Expansion to Durban, East London and Port Elizabeth were also envisaged once the operation was bedded down.

Mr Andrew has stated that FlySafair represents a "natural evolution" of the company's business and expected to stimulate growth in the South African domestic market. FlySafair is aiming to gain an advantage over SkyWise which was granted its AOC in Aug-2013 but is yet to announce a launch date.

SkyWise first announced plans in Nov-2012 that it would launch domestic services in 1Q2013 with two leased 737-300s, claiming the shut-down of 1time had created a “massive shortage” in LCC capacity in the market. The airline was founded by ex-1time executives including SkyWise CEO Rodney James and finance director Glenn Orsmond.

The carrier has already loaded schedules into the GDS dating back to mid Aug-2013, offering 4,736 one-way seats per week to be serviced across three to six one-way services per day. 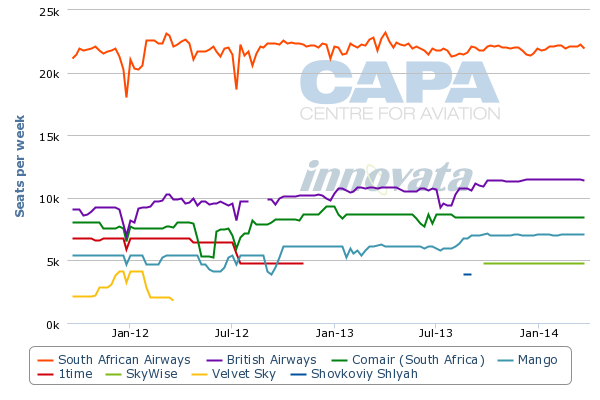 The demise of 1time as well as Velvet Sky earlier in 2012 provided Comair and SAA with a brief respite in competition allowing them to increase fares and improve yields. South Africa’s total seat capacity has reduced by 10% from about 360,000 before Velvet Sky’s exit in Jan-2012 to about 324,000 in Oct-2013.

Comair also considers its investment in a new IT platform, next generation 737-800 aircraft and a cost reduction programme has put the airline in good stead to face renewed competition when it arrives.

See related report: Comair profit recovers on the back of reduced competition and successful transformation programme

Mango has used 2013 to strengthen its position significantly

Mango has also used the year without 1time to significantly strengthen its position in the market, completing its largest expansion phase in the carrier’s history leaving Mango well positioned to fend off any new competitor. In addition the carrier returned to profit in the fiscal year ended 31-Mar-2013 after two years of losses.

Further domestic growth is possible with the carrier able to grow its fleet of seven 737-800s and a wet leased 737-300 to 15 aircraft over the next three to four years. The 737-300 was used to launch services on Johannesburg-Port Elizabeth, partly replacing 1time, as well as to increase capacity on Johannesburg-Cape Town.

Overall capacity on the Johannesburg-Port Elizabeth route has remained largely unchanged with British Airways’ initial increase in Nov-2012 being withdrawn in May-2013. 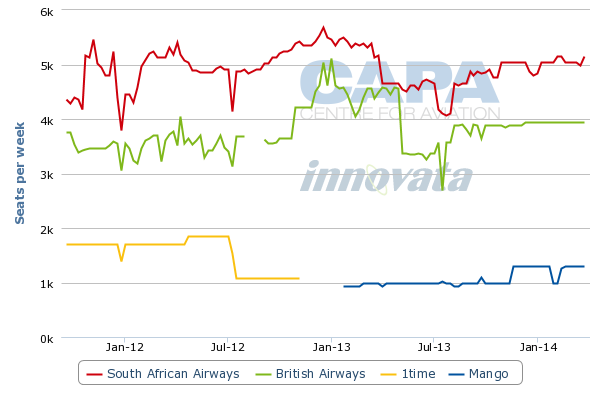 Mango has made its biggest capacity increase on Cape Town-Durban where it has now replaced all of the 1time capacity with the addition of another seven frequencies per week in Aug-2013 taking the total to 37. This has taken the total capacity on the route to just above the 12,000 one-way seats per week achieved in Jan-2012 shortly before the exit of Velvet Sky. Mango has grown its capacity share between Cape Town and Durban to 56% from about 40% in Aug-2012. 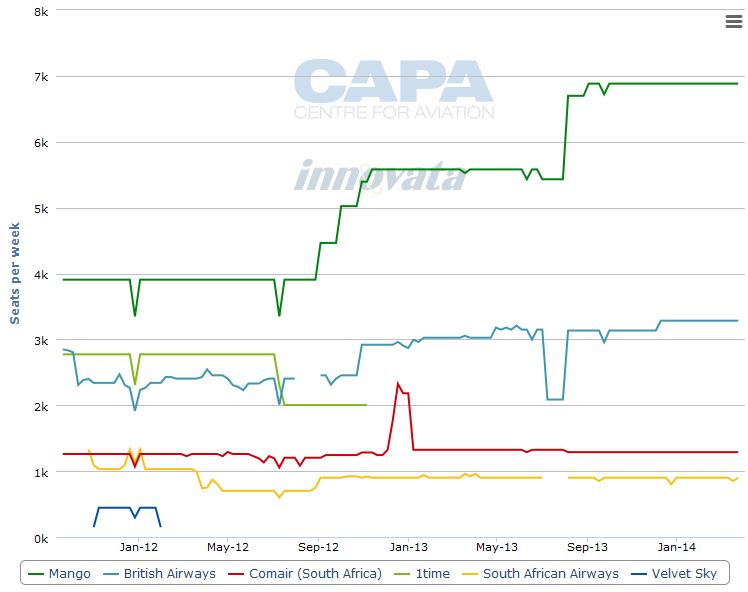 Capacity on the Johannesburg to Durban route has grown only marginally since 1time closed with most of the increase coming from Mango which has added 1,062 one-way seats per week to the route to offer 6,642 seats in Oct-2013. Kulula also added 717 one-way seats per week, taking its total to 5,539. 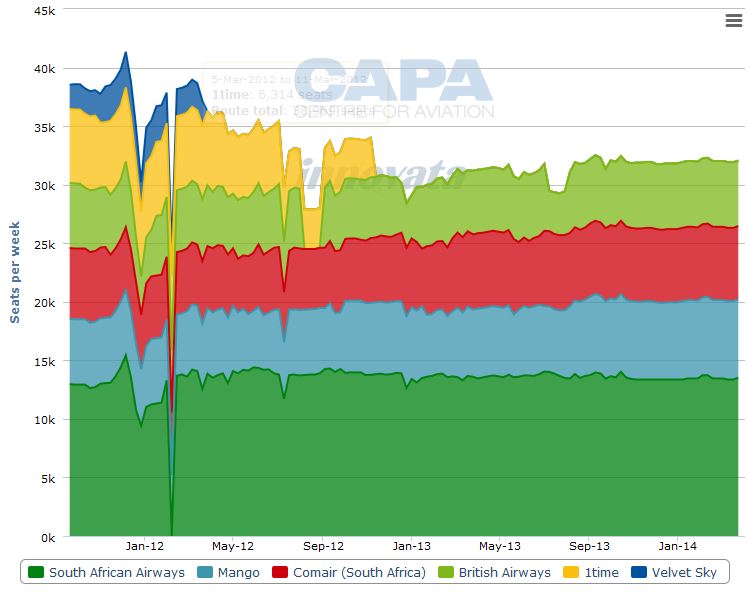 The court victory over FlySafair will provide Comair and SAA with a little more time to consolidate their positions, and offers SkyWise a possible opportunity to steal a march on FlySafair.

Even if FlySafair is able to convince the High Court that its ownership structure is above board, it may struggle to regain public confidence, particularly where its competition has been able to establish stronger followings thanks to the delay.

Eventually a third independent competitor will drive a wedge between the existing duopoly providers, driving down fares as a result. This time, however, the incumbents may have put their houses in order sufficiently to remain profitable in a more competitive environment.