South Africa’s Comair has bounced back to report a ZAR227.5 million (USD22.8 million) net profit for the financial year to 30-Jun-2013 as the benefits begin to flow from reduced domestic competition and an 18 month transformation strategy, including the implementation of the Sabre IT platform, a freeze on all non-critical costs and the arrival of next generation 737-800 aircraft.

The Johannesburg Stock Exchange-listed carrier has benefited from the demise of domestic LCC competitor 1time in Nov-2012 which significantly reduced capacity and has allowed fares to increase substantially as the market returned to a two-group duopoly with South African Airways (SAA). The competitive reprieve looks to be short lived, however, with SkyWise and FlySafair both poised to launch services on the golden Johannesburg-Cape Town route.

Comair CEO Erik Venter remains confident that the investments over the past 18 months have taken the carrier to a new level of efficiency and built a sustainable foundation.

“Our much improved infrastructure as well as our reputation and on-going focus on safety, customer service and efficiency have built a sustainable foundation to accommodate growth opportunities and ensure that Comair continues to play a major role in the Southern African aviation and travel industry,” Mr Venter said.

Comair profit bounces back from its toughest year in history

The improvement in revenue was largely driven by increased ticket prices in response to exchange rate related cost inflation, as well as improved inventory management.

But operating costs of ZAR4.8 billion (USD480.9 million) were impacted by high fuel costs and the rapidly devaluing ZAR.

“The escalation of the dollar oil price since 2011 was exacerbated by the rapid devaluation of the rand against the dollar, impacting on the rand fuel price as well as various hard-currency based maintenance, lease and distribution system costs. The fuel efficiency of our new 737-800 aircraft, as well as the termination of some dollar-based leases on aircraft that they replaced, helped to marginally reduce exposure to the currency and fuel price,” Mr Venter said.

The exit of LCC competitor 1time also helped to restore load factors to prior year levels, as the Comair and SAA groups gradually increased capacity by only about half of the approximately 43,000 one-way seats per week operated by 1time in Jun-2012.

However, Comair states that despite the improved earnings, its net profit per passenger of ZAR45 (USD4.51) remains low relative to the capital investment required.

Comair said it held about a 39% share of the domestic market, split between Kulula with about 21% and British Airways about 18%. The SAA Group held the remaining 61% including its LCC Mango, SA Airlink and South African Express Airways.

Comair’s profit improvements were driven by an 18 months transformation project launched at the end of 2011 to address higher operating costs associated with rising fuel prices and the effects of the falling ZAR. The measures included a freeze on all wages and non-critical costs.

The carrier also implemented a new IT platform from Sabre which has improved revenue integrity, inventory management and optimised ticket pricing, as well as improved productivity.

Comair expanded its route network with Kulula launching Johannesburg-East London with 13 frequencies per week against 40 frequencies offered by SAA. Kulula replaced 1time on the route. 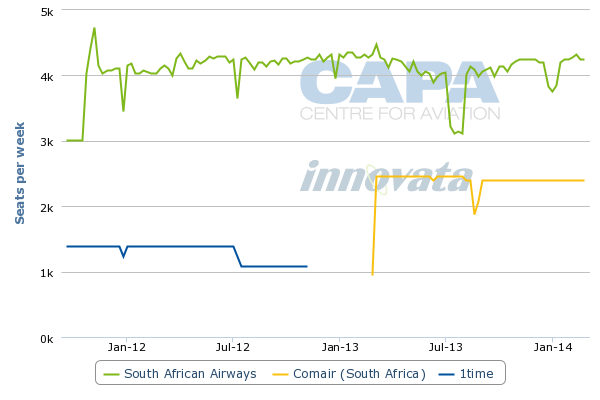 Comair expected the new British Airways services to be popular with business travellers, while Mozambique was also becoming an increasingly attractive tourism destination. 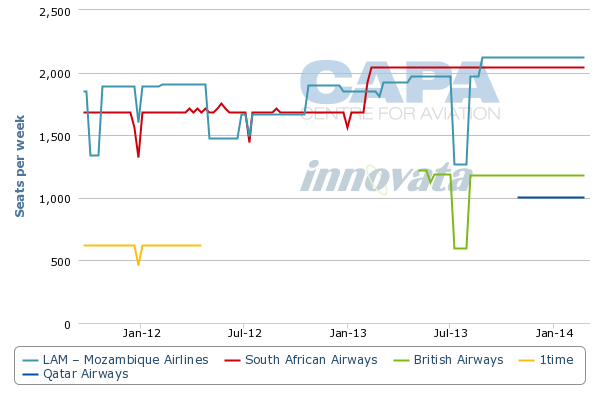 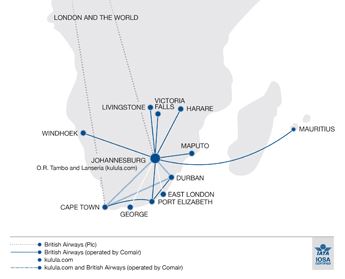 Comair and SAA face a return of competition on the prized Johannesburg-Cape Town route with SkyWise and FlySafair both planning to launch services by the end of 2013.

Domestic fares rose sharply after former operator on the route, 1time, was placed in liquidation, but SkyWise has reportedly said it will reduce fares by about 25% when it commences services on the Johannesburg-Cape Town route. The cheapest return fares on the route are about ZAR1,800 (USD180) offered by Mango and Kulula.

SkyWise has already loaded schedules into the GDS dating back to mid Aug-2013, offering 3,840 one-way seats per week, after it was awarded its AOC, but it has not yet actually started operations. The carrier has previously stated it plans to launch with three times daily services using two leased 737-300 aircraft. But based on the capacity listed by Innovata, a four times daily services appears more likely using the aircraft type.

FlySafair has successfully fended off an attempt by Comair to scupper its plans to launch 10 times weekly frequencies on the Johannesburg-Cape Town route with two 737-400s by the end of 2013.

FlySafair is an LCC subsidiary of long established broad-based South African aviation company Safair which has been in existence over 40 years, providing aircraft leasing, charter operations, maintenance and training services.

Safair has previously been contracted by other South African carriers as a back-up provider to operate schedules when their own aircraft were out of services for maintenance or crew shortage reasons.

Safair CEO Dave Andrew said FlySafair represented a "natural evolution" of the company's business and it was expected to stimulate growth in the South African domestic market.

Mr Andrew said the airline would announce a launch date once its call centre and website were operational.

The next year will be the first full year of operations of the new 737-800 fleet and Comair has signalled it may place further fleet orders for aircraft deliveries beyond 2018.

Comair took delivery of four 737-800s for the Kulula fleet in the first half of the financial year and expects to take delivery of the remaining four on order in late 2015. The 189-seat aircraft are also bigger than the 737-400 they replace, offering greater revenue generating potential and lower maintenance costs.

Despite the strong financial result, Comair remains cautious about the strength of the South African market, particularly in light of relatively weak GDP growth forecasts. Monthly domestic passenger numbers also remain 5% down on last year, and have yet to recover to 2008 levels.

The challenge to industry profitability is highlighted by the fact that the average domestic fare has increased by only 14% since 2001, while operating costs have risen by 163% and the consumer inflation index by 98%, according to Comair.

The carrier has also moved to damper what it regards as unrealistic growth expectations for air travel within Africa, as well as its own regional expansion.

“We are still of the opinion that there are substantial challenges to overcome before Africa achieves the economies of scale that will adequately address the risks of operating in many parts of the continent. We will therefore remain pragmatic in our assessment of opportunities for expansion into Africa,” the carrier stated.

But Comair’s work over the past 18 months to reduce costs and improve systems together with the arrival of a modern fleet means it should be well placed to take advantage of opportunities as they arise and cope with a return of domestic LCC competition as it emerges.