This is the second instalment in a two-part series of reports on South African Airways' (SAA) low-cost subsidiary Mango. The first report looked at Mango’s slow pace of expansion in the five years after its Nov-2006 launch and its improved outlook in the domestic market, where the carrier over the last year has begun pursuing faster growth. This report looks at the potential for Mango to operate international services from its South African base and launch new affiliates in other African countries, which would put Mango in competition with new pan-Africa LCC group fastjet.

Potential joint ventures or affiliates have always been part of Mango’s long-term plan. But just as it has been relatively conservative in the domestic market, Mango has been slow to expand in the international market – both organically and in establishing joint ventures.

Mango has not yet succeeded at establishing any joint ventures and has still not operated a single international scheduled flight. However, the carrier finally dipped its toe in the international market in Mar-2013, when it launched charter flights to Zanzibar in Tanzania. The service currently only operates once weekly but provides a foundation for Mango to grow in Tanzania, where the carrier aims to eventually operate scheduled flights to Zanzibar and Kilimanjaro.

Tanzania is a key market for Mango and its parent SAA as it is the initial home market for fastjet. The new LCC group launched domestic services in Tanzania in Nov-2012 and recently secured approval to launch international flights from Tanzania to three countries including South Africa.

The approvals came after a lengthy and costly battle by fastjet Tanzania, which initially expected to begin international services shortly after its domestic launch. The carrier, which currently operates a fleet of three A319s, is expected to soon set launch dates for services from its Dar es Salaam base to Johannesburg, Kigali in Rwanda and Lusaka in Zambia. As fastjet turns attention to finally launching international services, it has postponed plans to launch a South African affiliate, which originally aimed to launch domestic services in Jul-2013.

As analysed in the first report in this two-part series, the launch postponement of fastjet South Africa gives Mango and South Africa’s other remaining LCC, Kulula, more time to prepare for increased competition and cement their already strong position in the South African domestic market.

Dar es Salaam will be the first of potentially several international markets that SAA will see new low-cost competition from fastjet. As the group launches new affiliates throughout Africa, Johannesburg will be a logical destination, allowing fastjet to leverage its presence in several markets and start connecting the dots in its planned pan-African network. International services are also a possibility for fastjet’s planned South African joint venture, assuming it launches, although the focus at least initially will be on the domestic market.

With Mango, SAA has an option for responding to the prospect of LCC competition on some of its most lucrative international routes. But at least for now the SAA Group strategy is to use Mango to open new leisure-focused international routes rather than have Mango operate alongside SAA like it does on six of Mango’s seven domestic routes.

As a result Mango is targeting the secondary Tanzanian cities of Kilimanjaro and Zanzibar and has no intention of serving the capital Dar es Salaam. “Our path to market starts off as leisure as a leisure-based carrier regionally,” Mango CEO Nico Bezuidenhout told CAPA recently. “We are always conscious of cannibalisation. There are some routes as a single shareholder as the SAA group it doesn’t make sense for Mango to enter.”

Having Mango enter the Johannesburg-Dar es Salaam route would be risky at it would likely lead to over-capacity and intense competition, impacting SAA as well as fastjet. But ultimately it could be a response SAA turns to depending on fastjet’s success in the market.

SAA at least initially will stick to its full-service product and try to leverage the advantage it has as a network carrier and member of the Star Alliance, which allows it to offer a wide array of connections and the option of a premium cabin. But SAA will likely have to match fastjet’s lower fares on some seats to retain price conscious point-to-point passengers and could eventually look at bringing in Mango should the battle prove to be challenging.

SAA has previously successfully fought off competition in the Dar es Salaam-Johannesburg market. Air Tanzania, Tanzania’s Precision Air Services and South Africa’s Comair have all previously served the route. Precision, which is partly owned by Kenya Airways, dropped the route in Oct-2012 while Comair exited in Aug-2011, less than a year after launching services to Dar es Salaam. fastjet will be a completely different type of competitor as Comair operated the route under the full-service British Airways brand and not under LCC subsidiary Kulula. But the repeated failure of carriers attempting to compete against SAA on the route highlights the challenges confronting fastjet.

Mango is more likely to eventually compete against fastjet in the smaller and more leisure-focused Kilimanjaro-Johannesburg and Zanzibar-Johannesburg markets. fastjet already operates domestic services to Kilimanjaro and Zanzibar, making them logical candidates for potential international services.

The Johannesburg-Zanzibar route was one of three international routes served by South African LCC 1time when it suspended services in Nov-2012. Mango has only filled a portion of the void left in the Zanzibar market by 1time as 1time was serving the market with three weekly flights. If Mango upgrades its Zanzibar service from the current one weekly charter flight to a more frequent scheduled flight it could make it difficult for fastjet to also enter the market.

If fastjet does enter, Mango will likely also have the advantage of offering connecting itineraries to and from Zanzibar as it already codeshares with SAA. The codeshare is now limited to two domestic routes but could be extended to international routes, particularly as Mango is expected to serve international routes which are not served by SAA. 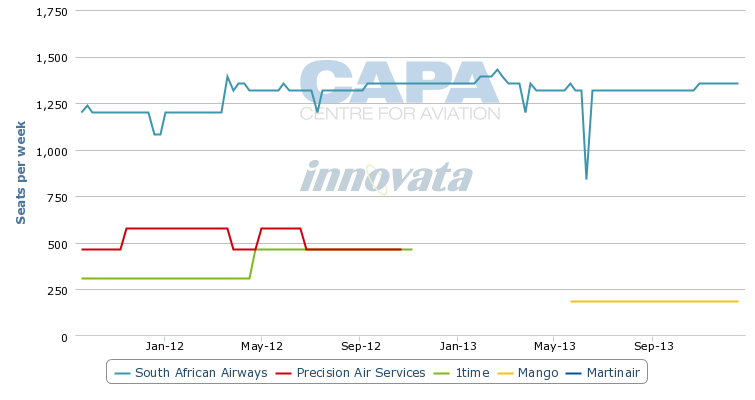 Source: CAPA – Centre for Aviation & Innovata
Note: Mango currently operates to Tanzania on a charter basis only. fastjet capacity not yet displayed because it has not yet set a launch date or schedule for the recently approved Dar es Salaam-Johannesburg route

Serving Mauritius from Cape Town and Durban would fit Mango’s strategy of avoiding duplication with SAA’s international network. But Mango could potentially take over SAA’s daily service in the Johannesburg-Mauritius route given this is primarily a leisure route.

Mombasa in Kenya would be another possibility. Mombasa along with Zanzibar and Livingstone in Zambia were 1time’s three international markets. While the Johannesburg-Livingstone market is already served by SAA and Comair/BA, Mombasa is not currently linked with South Africa. Filling the void left by 1time in Mombasa while SAA continues to serve the Kenyan capital and financial centre Nairobi would be in line with the strategy intended for Tanzania, where SAA will continue to serve Dar es Salaam, leaving Mango to serve Zanzibar and Kilimanjaro.

Mango keen to establish joint ventures in other markets

While Mango will likely compete against fastjet on at least a few international routes to and from South Africa, the much bigger potential battle will come if both end up establishing affiliates in the same market. South Africa remains the obvious market for local competition between Mango and fastjet but the battle could easily spread to other African countries as Mango looks to follow fastjet in establishing a pan-African network.

Mango’s failure to establish any joint ventures in its first seven years means that Mango and SAA has ceded a potential first mover advantage in Africa’s undeveloped but promising LCC market. But in Africa being the first to take a stab at establishing a regional LCC group has its challenges, as the delays fastjet has encountered and losses fastjet has incurred in recent months can attest.

By waiting and watching fastjet attempt to overcome obstacles, Mango can learn from fastjet’s mistakes and piggyback on its pioneering groundwork in opening up new markets. “In some respects there is a first mover advantage to talk about. But on the other side you can say someone else seeds the market,” Mr Bezuidenhout said. “...South of the equator I know fastjet is active in some of these countries but there are challenges.”

Even if fastjet ultimately succeeds there will be room for multiple players given the vast size of Africa. Outside South Africa the LCC penetration rate in the intra-Africa market is virtually zero. Mango and Kulula currently account for 87% of LCC capacity within Africa and neither carrier currently has any scheduled international services.

The Fastjet Group now accounts for only 12% of LCC capacity within Africa. This includes the current fastjet Tanzania operation and the operation of sister carrier Fly540 Kenya but does not include other Fly540-branded operations. The Air Arabia Group accounts for the remaining 1%.

UAE-based Air Arabia has affiliates in Egypt and Morocco but Air Arabia Maroc currently only serves international destinations in Europe while Air Arabia Egypt has just one route within Africa, Alexandria-Khartoum. LCCs currently account for about 18% of seat capacity in North Africa, giving North Africa a much higher LCC penetration rate than any other part of the continent except South Arica. But this is driven by flights to Europe and the Middle East, with the lone exception of the three weekly Air Arabia Egypt flights to Khartoum in Sudan.

Prior to its sale to fastjet in 2012, Fly540 attempted to establish affiliates in several other African countries but had limited success. In the 12 months ending May-2013 the Fastjet Group transported 837,000 passengers, including 169,000 at fastjet Tanzania and 669,000 at Fly540 Kenya, Fly540 Angola and Fly540 Ghana. This is less than half the number of passengers carried in the same period by Mango.

While Mango has so far remained entirely focused on the domestic market, it is confident the model it has gradually built and tested in South Africa can easily be replicated throughout the continent. The carrier particularly is looking forward to leveraging its use of alternative distribution and payment options. Mango claims to have the widest distribution network in Africa, which could give it a competitive advantage as it expands internationally given that internet and credit card usage remains low in most African markets.

The biggest limitation facing Mango in its pursuit of a pan-African network could lie with its shareholder. As Mango and SAA remain government owned, a huge amount of red tape and bureaucracy would have to be overcome to secure approval for any overseas investments. Potential partners in other African countries may prefer to work with private companies such as fastjet. A completely government-owned LCC is almost unheard of in the global airline industry. Mango was a controversial creation from the beginning as South Africa’s private LCCs vehemently protested against the concept of a government-supported LCC distorting the playing field.

Mr Bezuidenhout acknowledges Mango’s ownership structure “makes it more challenging” to establish joint ventures in other African markets but is confident it can still be done. “We continue to look at it. We have invested heavily in integrating this entity and smoothing and improving the model. It would be a shame not to replicate it elsewhere in Africa,” he said.

Mango will have its challenges but if anything they will be less insurmountable than the mountain the struggling fastjet is now attempting to climb. Eventually LCCs will succeed at penetrating Africa. Mango may end up being in the right position at the right time.