Air Europa has been talking up its ambitions in Latin America. It has firm orders for eight Boeing 787 aircraft, but its president Juan Jose Hidalgo recently said it will eventually have up to 22 of the type by 2020-2022. He plans to deploy them on Latin American routes. These could include Mexico City, Bogota, Cartagena and Quito.

Currently, Iberia is the leader on all three routes to Latin America where it competes with Air Europa and is number one overall on Spain to LatAm. However, Air Europa has been picking up routes dropped by its larger rival and Mr Hidalgo says it plans “to fly all the destinations that Iberia flies to”. The pendulum is swinging towards Air Europa in much of the region outside Central America. Iberia has abandoned the Caribbean altogether.

Air Europa has a unit cost advantage and ambitions to grow. This poses a credible threat to Iberia’s Latin American network. Iberia’s cost restructuring will have to succeed if it is to avoid a further dulling of its brightest network jewel.

Air Europa said on 13-Sep-2013 that it surpassed Iberia for the first time in the number of daily services in Aug-2013, operating 214 services per day compared with Iberia’s 207 services per day. This probably does not take account of Iberia Express (or Iberia franchisee Air Nostrum) and so is technically overstating the relative positions of the two.

According to Innovata, Iberia has around two and a half times the frequencies and seats of Air Nostrum overall and more than twice its seats on routes to Latin America.

Nevertheless, Air Europa is a significant competitor to Iberia, a point emphasised by Sep-2013 traffic figures from AENA, which showed Air Europa to be the fastest growing carrier at Madrid airport (with growth of 23% year-on-year). Its plans to add long-haul aircraft contrast with the austerity imposed on Iberia by its parent IAG.

According to Mr Hidalgo, this “puts Air Europa in a privileged position to shortly become the top Spanish network [carrier] and the benchmark for excellence for flights between Europe, America and the Caribbean.”

LatAm is important to both Iberia and Air Europa 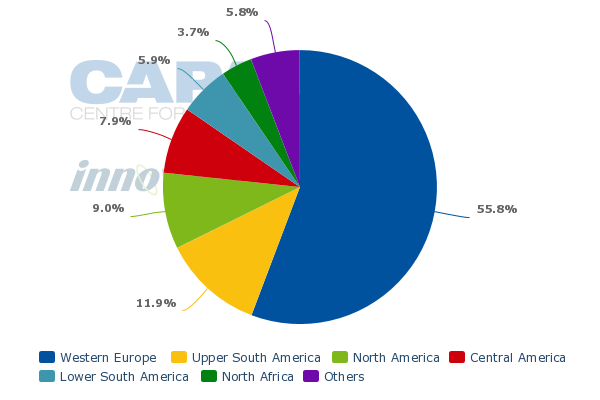 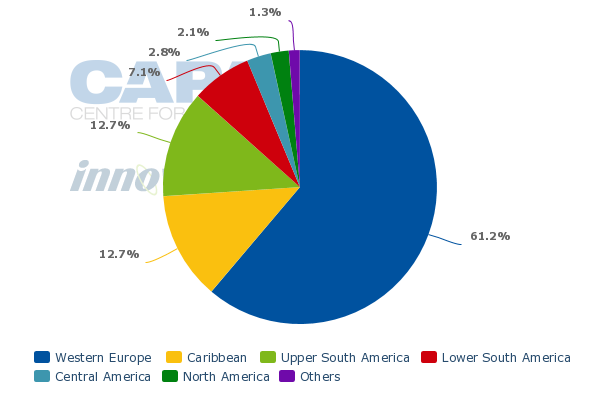 The two airlines are head-to-head only on Buenos Aires, Caracas and Lima routes

A glance at the top 10 international routes by ASK for each carrier reveals that the two only compete on three routes (Madrid to Buenos Aires, Caracas and Lima). Nevertheless, Madrid to Buenos Aires is the most important long-haul route for both carriers and Iberia has more than twice the capacity of Air Europa on the route.

On Caracas and Lima, which are both in Iberia’s top five long-haul routes, Iberia is also the market leader, although Air Europa’s share is closer to it. The relative shares of the two on these three routes has been fairly stable over the past couple of years, although Iberia has seen some erosion of its share to Lima and gained a little on the Caracas route (at the expense of CONVIASA). 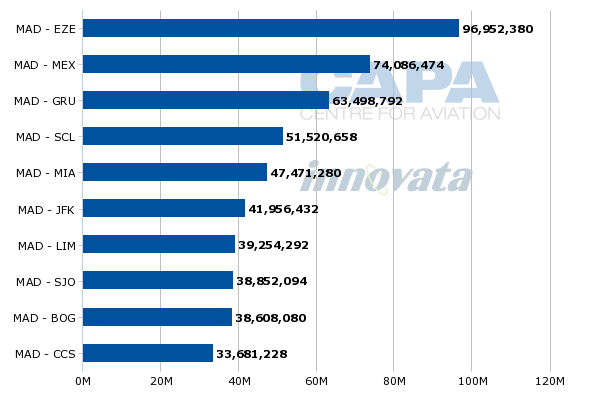 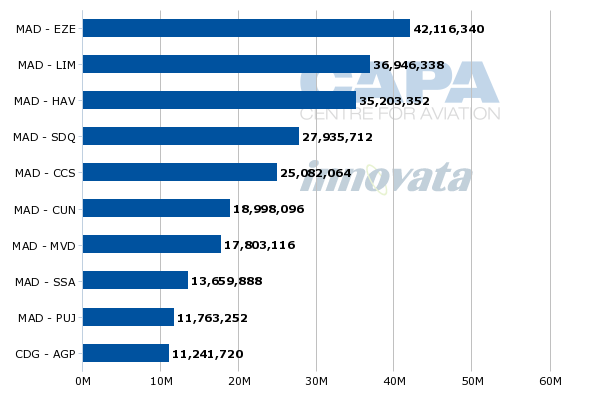 Iberia and Air Europa destinations in Latin America: at 13-Oct-2013

Moreover, while Iberia’s seat capacity to the region is roughly the same as it was in 2005, Air Europa has increased by 60% over the same period (data source: OAG). In 2003, Iberia operated four times as many seats from Spain to Latin America as did Air Europa to 2013.

However, capacity cuts by Iberia and growth by Air Europa in recent years have taken Iberia’s multiple of Air Europa’s seats from almost seven times in 2009 to less than three times in 2013. Moreover, Air Europa’s plans will see it step up capacity to Upper South America further in winter 2013/2014 and both Avianca and fourth-ranked LAN have increased their presence over the past year. 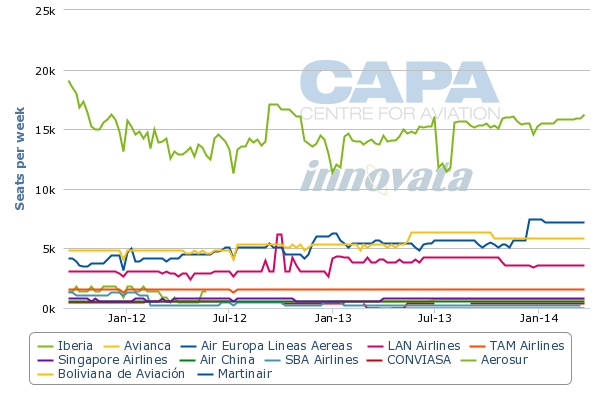 Lower South America: Air Europa is catching up here too

On Spain to Lower South America, Iberia is again the market leader with 47% of seats, followed by Aerolineas Argentinas with 22% and Air Europa with 20% (source: Innovata, week of 7-Oct-2013). Iberia is operating four times as many seats as Air Europa to the sub-region in 2013, but this multiple has fallen from 10 times in 2003 (and more than seven in 2009).

Air Europa increased capacity significantly in mid 2013, while LAN cut back a little. 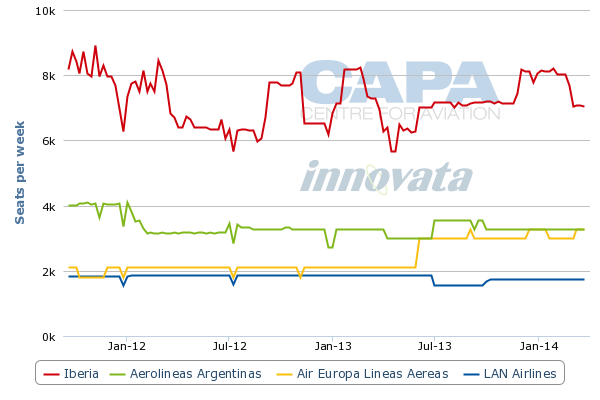 In Central America Iberia is however extending its lead

Turning to Central America, a lucrative market, this is the sub-region of greatest dominance for Iberia, with 72% of seats, followed by Aeromexico with 15%. It is Air Europa’s weakest region: it has just 9% of seats from Spain to Central America (source: Innovata, week of 7-Oct-2013). Unlike the other sub-regions, Iberia has added capacity (albeit very slightly) since 2011, while Air Europa has cut capacity. In 2013, Iberia is operating a little less than three times as many seats as Air Europa to the sub-region.

This multiple has risen from a little more than one in 2011, but has fallen from 3.5 in 2004 (and more than six in 2008). Newcomer Pullmantur Air now has a 4% share, gaining partly at the expense of Air Europa. 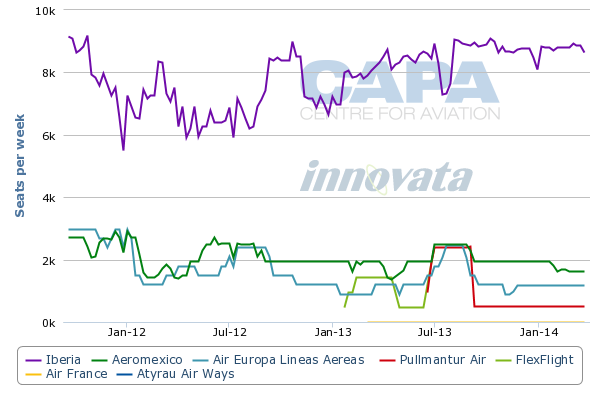 In the Caribbean Air Europa becomes dominant as Iberia withdraws

Air Europa is now the clear market leader on routes from Spain to the Caribbean, with 84% of seats, its highest share on any sub-region. Cubana de Aviacion is second on 9% and new entrant Pullmantur Air has 8%. 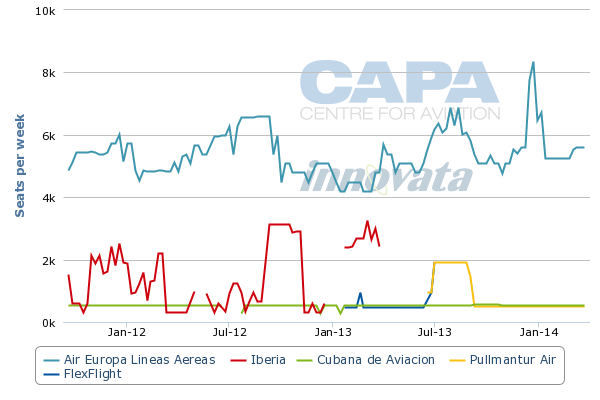 Air Europa is reportedly planning to launch twice weekly Madrid-Asuncion service and to invest EUR91 million over three years in Paraguay, according to consultancy Mercapital president Ángel Fernández Álvarez (EFE, 03-Sep-2013). The route would be the first direct service between Paraguay and Europe, according to Innovata.

On Madrid-Salvador, Air Europa’s frequency is to increase to daily from Nov-2013. It also plans onward connections to Santiago, Cordoba (Argentina) and Montevideo. According to Innovata, Air Europa is and will be the sole carrier on the Salvador services.

Air Europa plans to increase Madrid-Montevideo frequency from spring 2014 following "success from day one" on the route, according Mr Hidalgo, who said it was the best performing route in the carrier's 20-year history (El Pais, 01-Oct-2013), with a load factor averaging above 80%. It plans to add two additional weekly Montevideo frequencies through its upcoming hub in Salvador.

The South Atlantic war of words

As often seems to be the case when the stakes are high, the battle of the South Atlantic has led to some posturing. Air Europa’s Mr Hidalgo is on the offensive, claiming that his carrier is increasingly seen as the preferred carrier for Europeans flying to the Americas and Caribbean, as well as the preferred carrier for Americans to travel to Europe.

Willie Walsh, CEO of Iberia’s parent IAG, remains calm about the prospect: “If they think they can be profitable in markets where Iberia lost money, you just have to wish them luck” (Cinco Dias, 25-Sep-2013). Perhaps reflecting his discomfort at being on the back foot, he added: “We have to recognise that we face more competition, but that is why we have to change, to be attractive to our customers and earn money in the face of aggressive competitors, in Spain and Latin America.”

Iberia CEO Luis Gallego shrugs off the threat posed by Air Europa’s development of its Madrid hub: “Look at other European airports that are hubs and how many companies are there. It is not very sustainable to have two airlines at the same hub.” That may be the case, but this does sound very much like a recognition that Air Europa is indeed a threat.

Mr Walsh touched on the heart of the matter when he said that Iberia’s cost base forced it to close routes, noting, “there would not have been much difference if it was free to land at those airports.”

CAPA has estimated that Air Europa’s unit costs (cost per available seat km, CASK) are between EUR5 cents and EUR6 cents, well below those of Iberia’s EUR8 cent to EUR9 cent in spite of Air Europa’s longer average stage length.

Nevertheless, Air Europa has been loss-making, suggesting that its product and network have not been able to attract the necessary premium. As it takes advantage of Iberia’s restructuring and capacity cuts to develop its network by growing in Latin America and elsewhere, its unit cost advantage could prove to be telling when Spain’s economy and demand for air travel strengthens once more. Meanwhile, cost efficiency is also on its agenda.

IAG’s Mr Walsh and Iberia’s Mr Gallego are not the sort of airline managers to stick their heads in the sand over the issue of competition. At the moment, they are focusing on cost reductions at the loss-making Iberia, although the cost gap with lower-cost Air Europa looks too wide to be closed entirely.

Perhaps they are hoping that Iberia’s superior network and product positioning will be telling once its restructuring is complete and its costs are lower.