Air Europa: it started competition in Spain, but now pays the price, despite unit cost efficiency

In this second part of our report on Air Europa, we analyse the airline's revenue development and estimate its unit costs. In recent years, it has achieved revenue growth in spite of falling passenger numbers. However, it has recorded losses for at least the past two financial years, blaming “competition from low-cost airlines” and pilot strike action.

Air Europa's unit costs look to be very efficient compared with other European FSCs, but the impact on unit revenues of LCC competition has weighed on its profitability. So, why is it growing its short-haul operations once more in 2013?

In part one of our report, in which we assessed Air Europa’s network and market position we concluded it operates in very competitive markets, but that competition is less fierce on long-haul than on short-haul. Its strengths are its Latin American network and its membership of SkyTeam.

As discussed in part one of our report on Air Europa, its passenger numbers fell every year between 2007 and 2012. Nevertheless, it grew its revenues by one third between 2009 and 2012, in spite of a 9% fall in passenger numbers over the same period. This led to a striking 46% increase in revenue per passenger, which grew every year in this period from its level of just below EUR100 in 2009 to reach more than EUR145 in 2012. 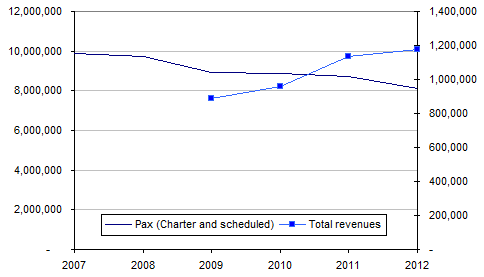 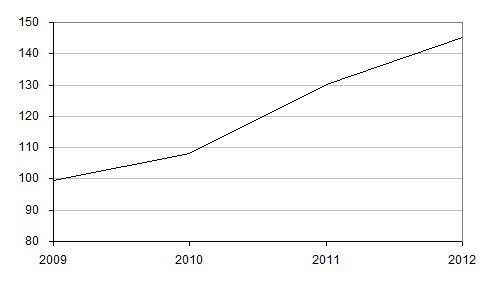 The improvement in revenue per passenger has been closely linked to increases in average sector length. Passengers pay more to fly further, but Air Europa’s 46% increase in revenue per passenger from 2009 to 2012 outpaced its growth in average sector length by more than 34% over the same period. This suggests a degree of pricing power in spite of strong competition, particularly in domestic and European markets. 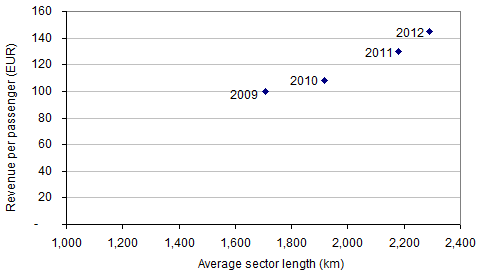 In order to understand this better, we need to look at Air Europa’s capacity development over the period 2009 to 2012. Total ASKs grew by 16% over the period, but fell by 4% in 2012 and there was a significant divergence between domestic and international capacity.

Domestic ASKs fell by 16% from 2009 to 2012 (cuts were particularly heavy in Air Europa’s mainland and Balearic Island services), while international ASKs grew by 36%. This change in geographical mix led to the increased average sector length and drove the growth in revenue per passenger.

Revenues on domestic services fell by 26% between 2009 and 2012, although they were growing again in 2012 (by 4%), while total international revenues more than doubled over the period. Virtually all the international revenue growth came from the Americas (almost all of this Latin America), where revenues more than tripled from 2009 to 2012. Revenues from the rest of Europe only grew by 6%. 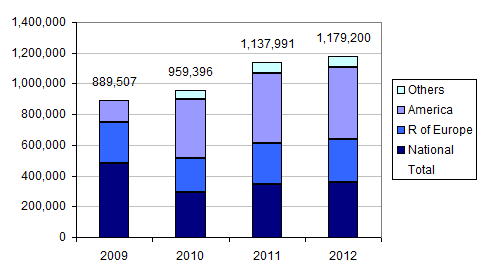 RASK has increased since 2010

It is worth noting at this point that Globalia (parent company of Air Europa) reports data on ASKs for scheduled passenger services only (i.e. not including charter services). The last time that it reported both scheduled and total passenger numbers, in 2010, scheduled passengers made up 92% of the total (up from 90% in 2009 and 89% in 2008).

Our calculation of RASK matches total revenue with scheduled ASKs and so probably makes the absolute RASK figure look a little higher than it would be if we had data for total ASKs, but non-scheduled services are a small portion of the total (based on the 2010 passenger numbers noted above) and the trend in RASK would likely look similar to the one we derive. 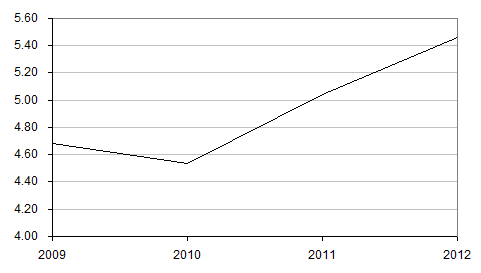 Looking a little more deeply at the RASK trend, the chart below shows its two component parts, namely revenue per RPK (RRPK) and passenger load factor. As noted above, RASK fell in 2010 and this was mainly caused by a fall in load factor (although RRPK also fell slightly) as capacity was added back too soon after the 2009 global downturn.

From 2010 to 2012, the recovery in RASK was mainly due to growth in RRPK although a load factor gain in 2012 also played its part. Further significant load factor gains may be difficult to achieve from an already high level of close to 82%.

Air Europa’s capacity cuts in the Spanish domestic market (and overall) and its more targeted capacity growth in international markets contributed to its RASK recovery from 2010. 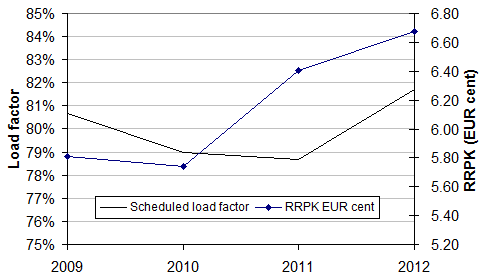 If growth in revenue per passenger has mainly been driven by growth in average sector length, the simultaneous achievement of growth in RASK, which typically declines as sector length increases, has been more creditable. However, this has also been helped by a positive balance between supply and demand in the airline industry as competitors have also cut capacity in the Spanish domestic market and added it fairly cautiously in international markets.

As such, Air Europa’s positive pricing trends are not totally in its own control and could be vulnerable to changing competitor capacity plans as well as levels of demand. Air Europa is growing seat capacity by almost 4% in 2013, after cutting it in four of the previous five years, and this could have a softening impact on pricing.

Moreover, it is growing faster this year in the more price-sensitive domestic market (5%) than in international markets (just under 2%). The increase in average sector length is flattening and this may make further gains in revenue per passenger more challenging. 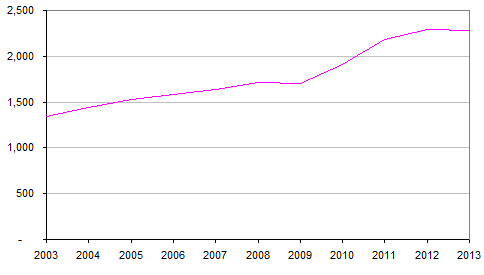 Product differentiation is hard to achieve

Other than making choices about its network, capacity and partnerships, Air Europa’s main levers for improving profitability are the nature of its product offering and its costs. Sustainable product differentiation is hard to achieve in the airline industry and additional product features can also lead to additional costs. Product essentially consists of the cabin and the fleet.

Air Europa’s economy class cabin includes one free checked bag, but is otherwise lacking in frills: it has a buy on-board catering service and it charges for seat reservation. The airline offers connecting services, a full business class product and membership of the Air France-KLM Flying Blue frequent flyer programme. Overall, its offer sits in the full service carrier category, albeit with some LCC features in its economy cabin. 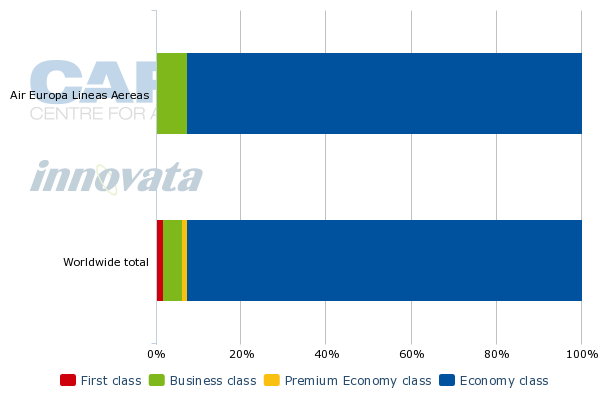 In what is essentially a duopoly market for aircraft, achieving significant competitive advantage from the fleet is mainly about having a young fleet. At the end of Oct-2012, Air Europa’s average fleet age was 6.1 years, according to the Globalia 2012 annual report. The CAPA fleet database suggests that its A330s and 737s are a little older than this, at seven to eight years, while its Embraer regional jets are younger, at less than four years. 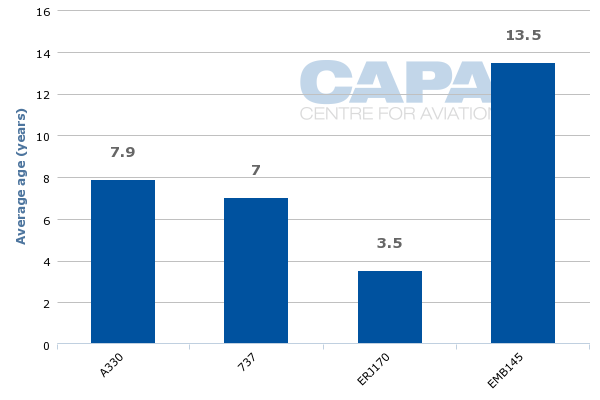 In 2012 the airline embarked on a restructuring process, with a slight reduction in average fleet size compared with 2011. According to Globalia’s 2012 annual report, Air Europa signed a sale and purchase agreement with Boeing in 2006 to acquire eight 787 aircraft to be delivered in 2016 for USD1.5 billion. This is an average of USD187.5 million per aircraft, which compares with the current average list price of USD206.8 million (source: Boeing website, 31-Jul-2013). Taking account of price inflation between 2006 and today, this suggests that Air Europa did not receive a discount from Boeing and will have no ownership cost advantage. 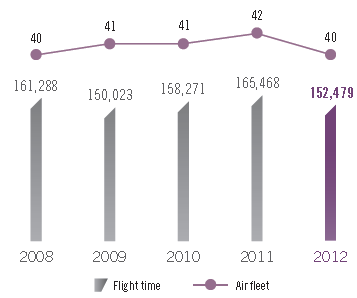 It does not disclose profits by division, but its 2012 annual report says that Air Europa lost EUR14 million in FY2012 (presumably at the level of net profit) and its 2011 annual report says that it made pre-tax losses of EUR13 million in 2011. As illustrated in one of the charts above, it does report annual revenues for Air Europa and it split these out by region. In FY2012, total revenues grew by 3.6% to EUR1,179 million.

By combining this figure with Air Europa’s reported figure for scheduled ASKs, we arrive at a RASK figure of EUR5.46 cent. The actual total revenue per ASK figure is likely to be a little lower than this, since Air Europa’s non-scheduled ASKs are not included in the denominator, but scheduled traffic is well over 90% of the total and so the difference is likely to be only a few percentage points.

Making the assumption that Air Europa’s operating result was also somewhere around breakeven, then its CASK can be approximated as being similar to its RASK. The chart below uses an illustrative estimate of between EUR5 cents and EUR6 cents for Air Europa’s CASK and plots it against an average sector length calculated from OAG data (see above).

This demonstrates that Air Europa’s unit costs, taking account of its average sector length, are very competitive by comparison with other European full service carriers and consistent with the higher-cost LCCs. Air Europa’s position on the chart certainly shows Iberia what can be achieved in Spain.

Competitive CASK, but RASK is not enough

Nevertheless, its inability to make a profit from this cost base suggests that, in spite of some evidence of pricing power (illustrated by improving unit revenues in recent years), its product and network are not strong enough to attract the necessary premium.

Globalia explained Air Europa’s 2011 and 2012 losses by saying that, in addition to the impact of a strike by pilots, competition from low-cost carriers prevented it from passing on fuel price rises and the effect of the weak euro to customers. It seems that this analysis is spot on, but Air Europa’s 2013 move to grow once more into the short-haul market looks like a gamble as it will add to that competition. It is also growing its Latin American network, where competition is less fierce.

The short-haul growth is partly designed to feed its long-haul network, but RASK weakness cannot be ignored and greater cost efficiency is essential. Two successive years of correct analysis of the same result is no substitute for taking action to improve the result. 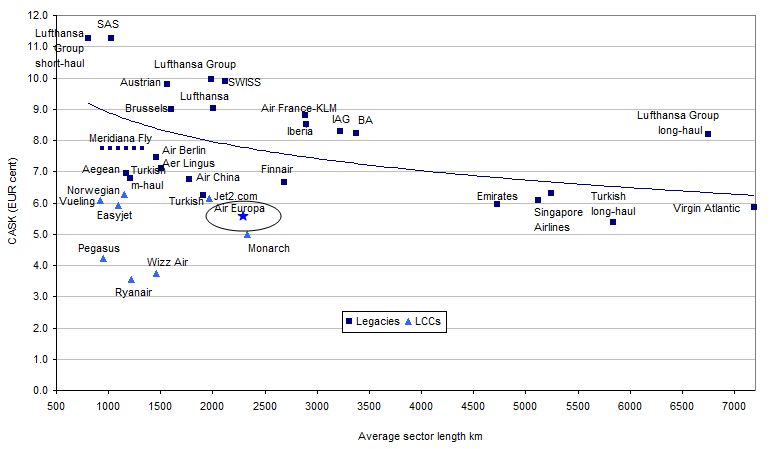