Rapid growth in Turkish Airlines’ passenger numbers has been driven by international traffic, in particular international-to-international transfer traffic. By region, North America, Africa and the Far East have seen the highest growth rates, but Europe remains its biggest region by passenger numbers. This strategy has parallels with those of Emirates, Qatar Airways and Etihad. In part two of our analysis, we compare Turkish Airlines’ network with those of the latter three.

The geographic location of its Istanbul hub means that, compared with the three Gulf carriers, it is closer to Europe, North America, Latin America, North and West Africa (and western parts of Central Africa). Relative to Emirates, Qatar Airways and Etihad, it has a low percentage of its international seats on routes to Africa and, most strikingly, to Asia-Pacific.

In Africa, THY’s main strength is North Africa. Its low presence in Southern and Eastern Africa relative to the Gulf carriers is understandable given its geographic location and its narrowbody dominated fleet, but its weakness in Central/West Africa seems to underplay its natural advantage. In Asia-Pacific, it is reasonably strong on Northeast Asia, but noticeably underweight in South Asia and Southeast Asia. For now, Southwest Pacific is just beyond its range and, in this respect, its location is a disadvantage relative to the Gulf hubs.

It is growing strongly in Africa and expanding in South Asia (including a new Kathmandu service) and Southeast Asia (including resumption of Kuala Lumpur, not operated since 2002). It also has an extensive list of codeshare partners serving Asian destinations.

THY can reach most of the world from Istanbul, much of it with narrowbodies

From its Istanbul hub, THY can serve all of Europe, the Middle East, Central Asia, much of Africa and the northwest of India with narrowbody aircraft. Its widebody fleet can reach almost all of the rest of the world, with the exception of Australasia and lower South America (it serves Buenos Aires via Sao Paulo). Perth, in Western Australia, is within the range of its Boeing 777-300ER aircraft, but it lacks a domestic Australian partner with whom it could serve the more lucrative eastern Australian market. Currently, Turkish accesses Australia and New Zealand via a codeshare operated by Star partner Thai Airways. Although it can reach all of Africa, it serves Cape Town via Johannesburg and a number of other destinations in Africa through stopovers. 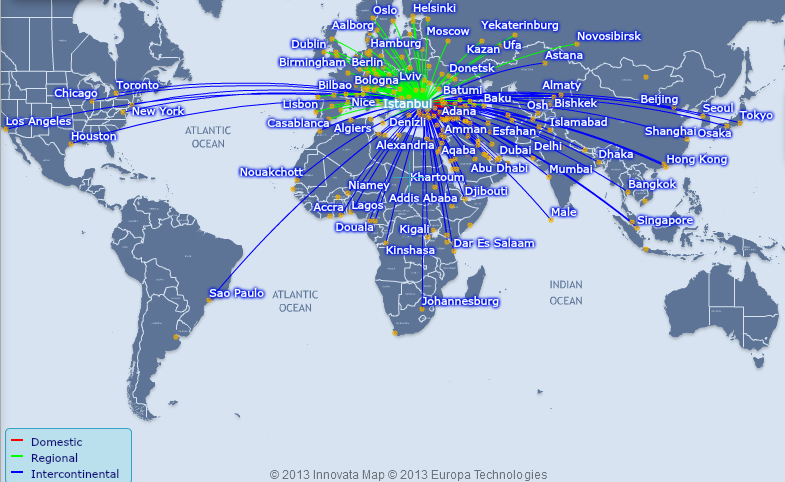 The Gulf airlines can reach a little more of the world

The three Gulf carriers’ hubs are further to the east and to the south than Istanbul. From there, Emirates, Qatar Airways and Etihad all fly non-stop to Australian cities. However, they still cannot quite reach every destination on the planet non-stop. Emirates serves Auckland via Melbourne, Sydney or Brisbane; Christchurch via Bangkok and Sydney; and serves Buenos Aires via Rio de Janeiro. Qatar Airways serves Buenos Aires via Sao Paulo (and Cape Town and Maputo via Johannesburg). Although Etihad flies non-stop to Sydney and Melbourne, it serves Brisbane via Singapore. 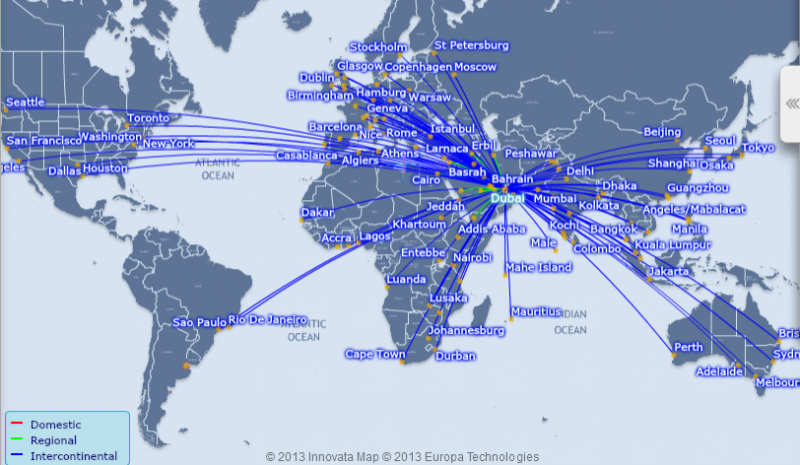 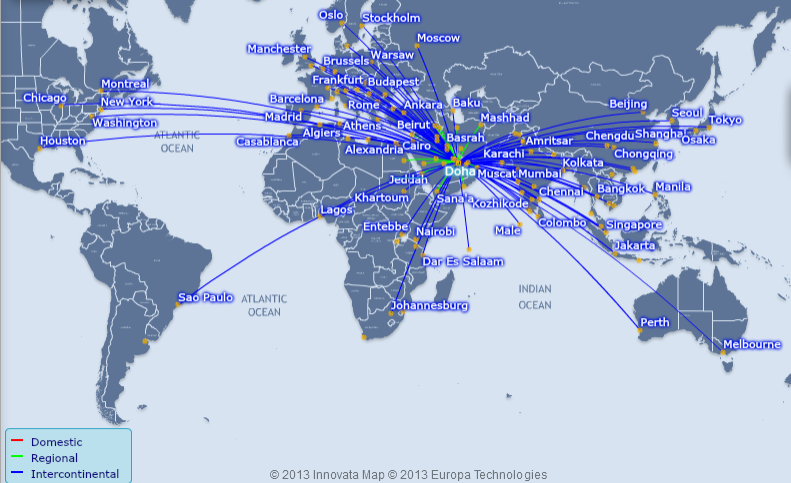 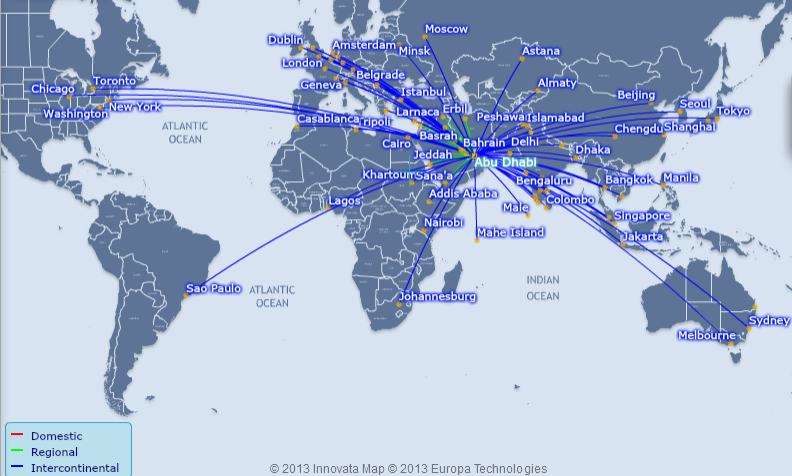 THY has a domestic market and more international destinations

Looking in a little more detail at THY’s network compared with those of the three Gulf carriers, the most obvious difference is that Turkish has domestic destinations. It also has more international destinations, 188, than any of the other three. By region, it has more destinations in Africa, Europe and the Middle East than any of Emirates, Qatar Airways or Etihad, but fewer than any of them in Asia-Pacific. They all have only a single digit number of destinations in North America (THY is second to Emirates in this respect) and three or fewer in Latin America.

THY has many more seats in Europe, but fewer in Asia-Pacific and Africa

By total seats offered, THY and Emirates are of a similar size, more than twice as big as Qatar Airways and close to four times the size of Etihad (although the latter is growing rapidly). However, 40% of THY’s seats are in the domestic Turkish market, where the Gulf carriers do not compete. Emirates’ international seat capacity is around 50% bigger than that of THY, while Qatar’s international capacity is around 75% of THY’s.

By region, THY has more seats than any of the other three in Europe (Emirates has similar capacity in Western Europe, but THY is stronger in Eastern Central/Europe) and is only a little behind Emirates in North America. It is fairly well represented, in terms of seats, in the Middle East but has less than half of Emirates’ capacity in Africa and is very weak in Asia-Pacific.

Taking a closer look at Asia-Pacific capacity, THY is the leader among the four in Central Asia, where the others have very little or no capacity. THY is also reasonably well represented in Northeast Asia: while its capacity there is half that of Emirates, it is similar to Qatar’s and significantly more than Etihad’s. For passengers connecting from North America, Europe, West Africa and much of North Africa, Istanbul represents a slightly lesser diversion than the Gulf hubs on the way to Northeast Asia. THY will increase capacity to Northeast Asia this summer by upping the gauge of its daily Seoul service from a 270 seat A340-300 to a 340 seat Boeing 777-300ER (source: Innovata) from 1-Jul-2013.

THY’s seat capacity to the three other sub-regions within Asia-Pacific is very weak. For reasons of aircraft range already noted, it cannot currently reach Southwest Pacific (although this is reportedly planned for 2014, dependent on aircraft availability), but its low capacity into South Asia and Southeast Asia relative to the Gulf carriers, and to its own capacity in Europe, is striking.

THY is expanding in South Asia and Southeast Asia

Turkish Airlines is expanding from its low base in South Asia, launching a Kathmandu service in Sep-2013 and roughly doubling its capacity into Afghanistan and Bangladesh in 2012 (source: Innovata). It has also reportedly said that it would like to operate to more destinations in India (it currently operates daily services to Delhi and Mumbai only), including Chennai, Bangalore and Hyderabad if bilateral rights are expanded.

Both UAE and Qatar have considerably higher capacity limits than Turkey in their air services agreements with India and there are signs that the UAE limits could be further expanded, to the advantage of Emirates and Etihad. Moreover, Etihad’s proposed equity investment in India’s Jet Airways should further strengthen its position in the largest market in South Asia. 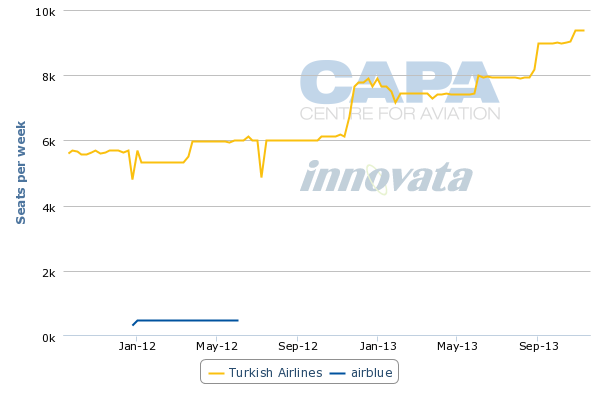 To Southeast Asia, Turkish Airlines is adding around 1,000 seats per week this summer versus summer 2012, an increase of approximately 20%, through the launch of a Kuala Lumpur service.

THY has many Asian codeshares

In addition to its own expansion in Asia, which can often be limited by restrictions in bilateral government agreements on traffic rights, Turkish Airlines has a number of codeshare agreements with partner airlines. Many, but not all, of these partners are fellow Star Alliance members.

These agreements help to give it access to markets where it is otherwise under-represented by its own seat capacity and to build feed to its Istanbul hub. In this way, east-west routes that may lack critical mass as pure point-to-point markets can be sustained and provide building blocks for further development of THY’s global transfer traffic strategy.

Weakness in East Africa and Southern Africa, but THY is growing rapidly in Africa

In Africa, THY has less than half of Emirates’ total seat capacity and only a little more than Qatar’s. It is the biggest of the four in North Africa, second behind Emirates in Central/Western Africa, but in third place in East Africa and Southern Africa.

The African continent is an area of focus for Turkish Airlines and it grew ASKs here by more than one third in the first four months of 2013, its fastest growing region. It has a goal to increase connections between Africa and the rest of the world as the main carrier, but may need to see some liberalisation of air service agreements to help it in achieving this.

Seat capacity in Africa this summer will be around 50% higher than at the start of last summer, with growth focusing on destinations within reach of the narrowbody fleet (less emphasis on Southern Africa). For much of Africa, Istanbul provides shorter connections to Europe, Central Asia and North America than travelling via the Gulf. 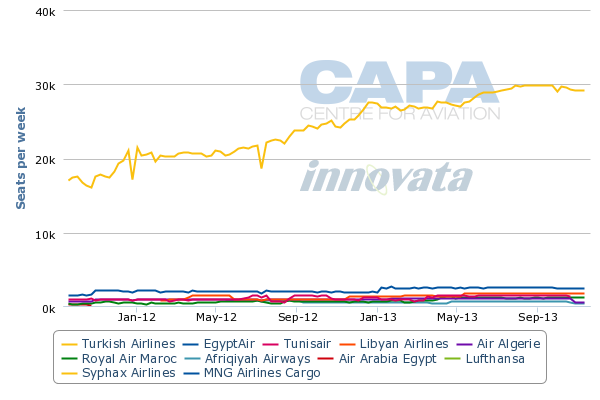 Turkish Airlines, Emirates, Qatar Airways and Etihad Airways average number of international seats per destination by region: 27-May-2013 to 2-Jun-2013 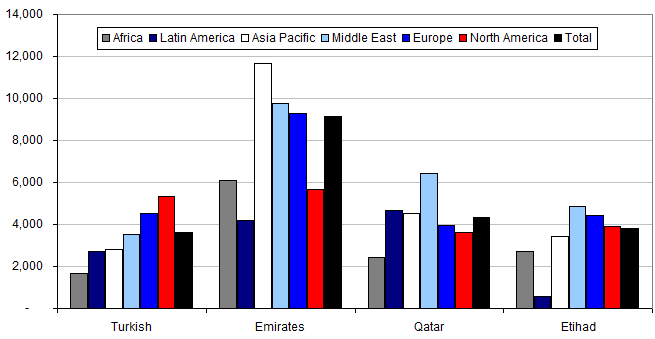 …built on frequencies and aircraft size

THY is a little ahead of Emirates on frequencies per destination in Europe, a measure that appeals to high yield business travellers, but serves these destinations with smaller aircraft. It looks relatively weak versus all three Gulf carriers on frequencies to Asia-Pacific and Middle East destinations. In Asia-Pacific, Africa and Latin America, its average frequency per destination falls short of achieving a daily service. Qatar Airways only fails to provide an average of a daily service to North America (just). Etihad also just misses achieving a daily service to all North American destinations and is some distance short of this in Latin America. 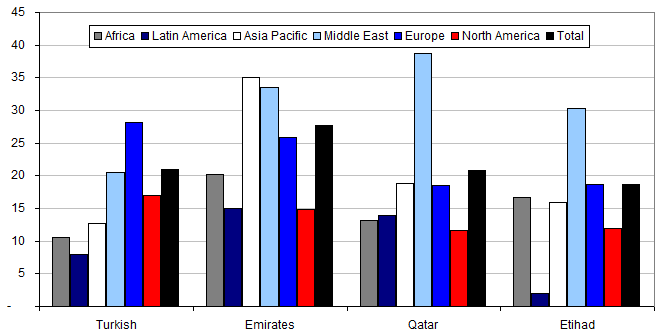 Turkish Airlines, Emirates, Qatar Airways and Etihad Airways average number of international seats per frequency by region: 27-May-2013 to 2-Jun-2013 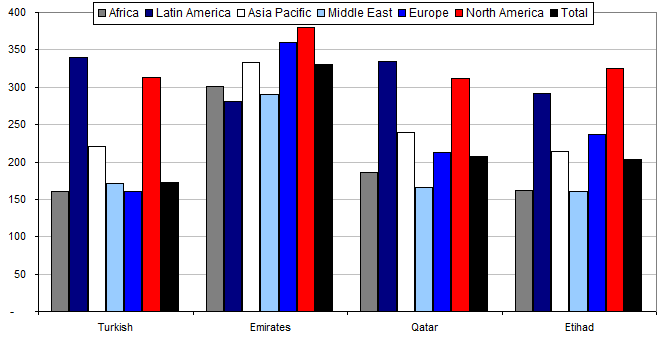 THY’s home market is an advantage over the Gulf airlines

Although THY’s expansion and future ambition relate to a large extent to capturing a growing share of transfer traffic flows, its growth has a feature that is significantly different from the Gulf carriers: its home market. The United Arab Emirates and Qatar already enjoy among the highest levels of penetration of air travel of any country in the world, both having well over 10 times the number of airline seats per head compared with Turkey. They also have a significantly higher level of economic wealth per head.

Turkey’s aviation market has significant potential for growth based on the relationship between economic growth and growth in air travel. THY should benefit both from this relationship and its transfer strategy. 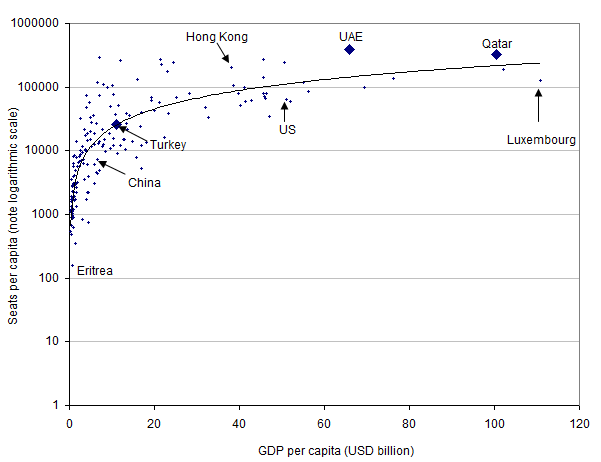