Turkish Airlines’ mission statement includes the aims: “To become the preferred leading European air carrier with a global network of coverage,… whilst maintaining its identity as the flag carrier of the Republic of Turkey in the civil air transportation industry.” It also has a vision statement with a number of additional aims, including being an air carrier with “a continued growth over industry average” and “unit costs equating with low cost carriers”.

Turkish Airlines has the world’s second largest network by number of international destinations, but is only eighth by number of international seats and Turkey itself is only the number 15 aviation market globally. Its considerable success in meeting the aims noted above owes much to its strategy of attracting global transfer traffic flows via its Istanbul hub, an approach that both involves competing with, and invites comparison with, the three fast-growing Gulf carriers.

As with any mission statement, this goal is very much open to interpretation and the definition of Turkish Airlines’ aim to become the “preferred” European carrier is not clear.

However, objectively speaking, Turkish Airlines (THY) is Europe’s fifth carrier by seat capacity (and passenger numbers), and is growing faster than any of its nearest competitors. 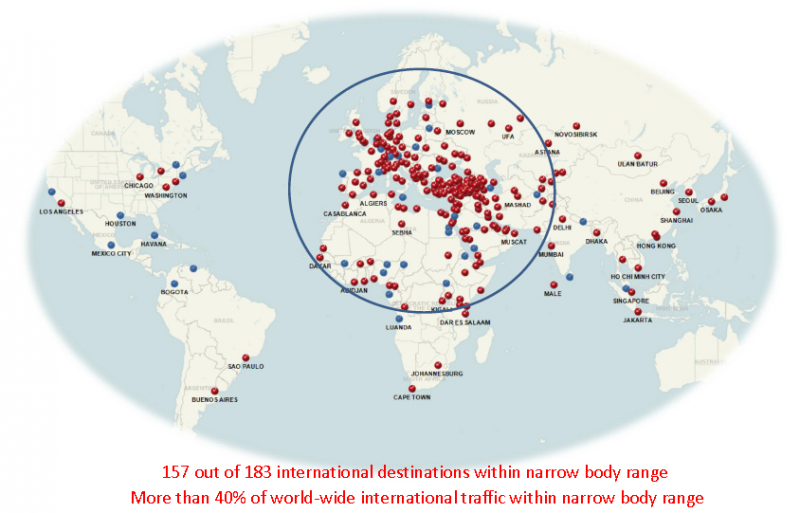 Turkish Airlines is no longer state-controlled (the government’s holding first fell below 50% in 2006) and is listed on the Istanbul Stock Exchange in 2006, but the Republic of Turkey retains a 49% stake in the carrier.

This maintains a strong association with Turkey and the airline is still regarded as the national flag carrier.

“…a continued growth over industry average”

THY has certainly been growing faster than the industry average in recent years, as illustrated in the chart below. It has enjoyed double digit growth in RPKs every year over the past decade, compared with global growth typically in the mid single digits. 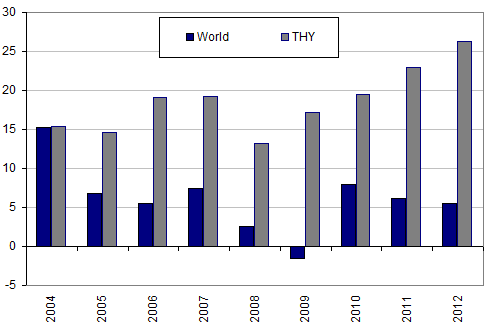 Growth in international and domestic passenger numbers for Turkish Airlines and Turkey: 2003-2012 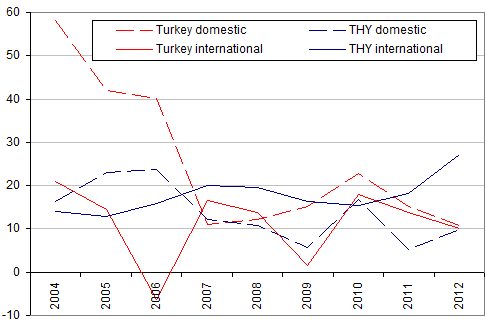 THY’s superior growth owes much to its transfer traffic strategy, by which it has used the geographic position of its Istanbul hub to attract passengers on Europe-Middle East, Europe-Far East and Asia, Europe-Africa and America-Middle East routes. In many ways, this puts it in direct competition with the Gulf carriers that are also using their hubs in a similar way.

In part two of this analysis, we will compare in detail THY’s network with those of Emirates, Qatar Airways and Etihad.

THY’s passenger numbers have tracked those of Emirates, but there are key differences

The largest and longest established of these Gulf carriers is Emirates, whose passenger traffic development THY has tracked over the past decade (see chart below) as both airlines carried 39 million passengers in 2012. However, a clear difference between the two is that THY has a significant domestic market, whereas Emirates has none. On international markets, where they compete with one another, THY had 23 million passengers, 41% fewer than Emirates.

THY is growing faster than Emirates on international markets and the gap has narrowed from 55% in 2007. 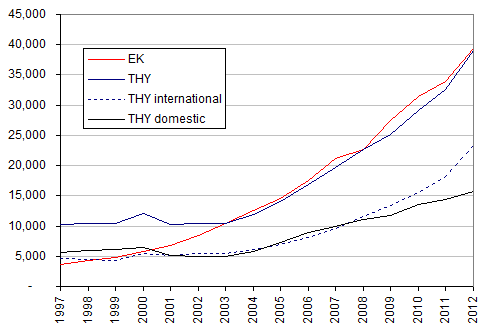 In ASK terms, Emirates was almost two and a half times the size of Turkish Airlines in 2012, in spite of the parity of total passenger numbers, due to Emirates’ focus on long-haul routes. Not only does THY have domestic routes, but it also has a large weight of routes into Europe, which are relatively short. 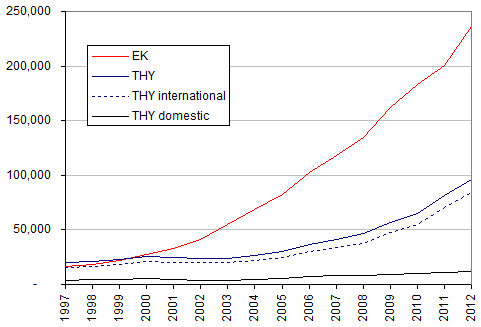 Emirates’ average passenger distance flown in 2012 was almost 4,800 km, compared with around 1,900 km for THY. Even when comparing only with THY’s international routes, Emirates’ network is significantly longer-haul. To a large extent, this reflects geography: THY’s Istanbul hub is much closer to the developed markets of Europe, much of North/West Africa and even the western parts of the Middle East than is Emirates’ hub at Dubai. 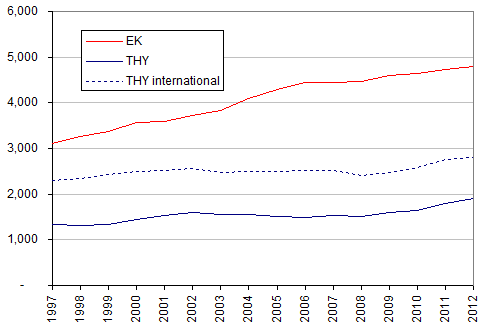 The regions that have seen the fastest growth since 2008 are North America (up more than four times), Africa (almost tripled) and the Far East (more than doubled). Passenger numbers to Europe have grown less rapidly since 2008 (by 72%) and this region has seen its share of THY’s international passenger numbers fall, although it remains the biggest international region with 60% in 2012. In the first four months of 2013, Europe’s share increased slightly from the same period in 2012, while that of the Far East fell.

Turkish Airlines breakdown of international passenger numbers by region: 2005 to 2013 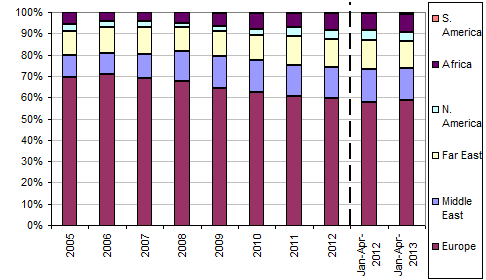 Transfer traffic has been key to international growth 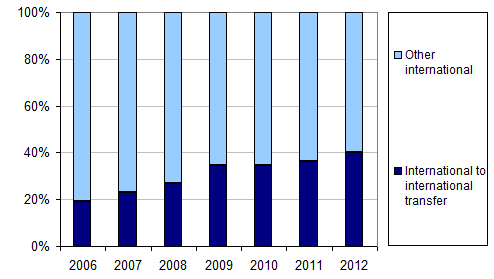 Existing orders and planned exits now give Turkish Airlines the capacity to growth the fleet to 423 aircraft in 2021, with slightly higher growth within the narrowbody fleet than the widebodies.

Compared with the three Gulf carriers, THY’s fleet is much more narrowbody focused. Almost 80% of its aircraft are single aisle, whereas all of Emirates’ fleet are twin aisle, as are the majority of Qatar Airways’ and Etihad’s aircraft. Not only does THY have a significant domestic market, but it also has a significant international short-haul market and serves these with narrowbodies. THY covers more than 80% of its international destinations with narrowbody aircraft.

Turkish Airlines’ unit costs (cost per ASK, CASK) are very efficient by comparison with other European flag carriers, based on 2012 numbers. They are not quite on a par with LCCs, when average sector length is taken into account, but are lower than any other European carrier and look efficient against Asian carriers.

Analysis of THY’s regional revenue and traffic data allows separate estimates to be made of its long-haul and short-haul CASK.

This suggests that it has a lower CASK on long-haul than Emirates, giving it a very competitive positioning. 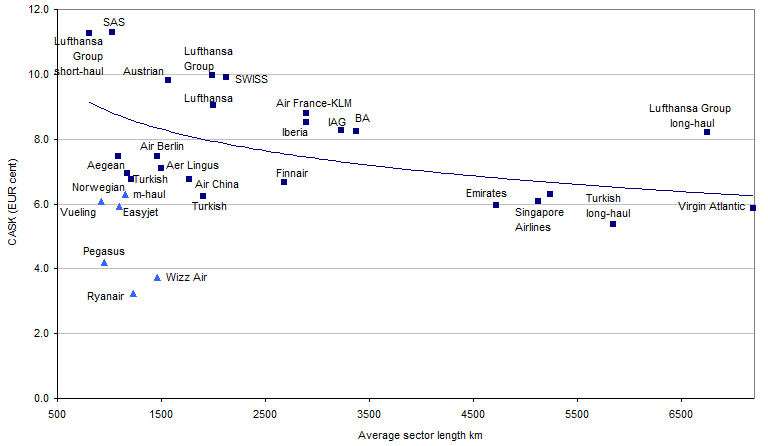