Although equity is not the main driver, the increased stake could give the SIA Group an edge as it looks to further deepen its codeshare partnership with Virgin Australia, particularly in the key Australia-Europe market.

Independent Virgin Australia has quickly emerged as SIA’s most significant partner in the two years since the two airline groups first forged a codeshare agreement, a further testament to the waning importance of global alliances. SIA, which is a longstanding member of Star but has traditionally taken a passive role in the alliance, is keen to embed its relationship with Virgin Australia as other current and prospective partners circle.

Virgin Australia’s tans-Tasman alliance partner Air New Zealand (ANZ) was the first carrier to take a substantial shareholding in the carrier, acquiring 14.9% through a lightning raid in Jan-2011. ANZ increased its stake to 19.99% in Sep-2011, effectively blocking at that point rival airlines from acquiring a substantial stake in Virgin Australia as the UK’s Virgin Group also then had a 26% stake. Under international norms an Australian carrier flying internationally cannot be more than 49% foreign owned, a feature that is also enshrined in Australian law.

With a view to ensuring better access to capital markets, Virgin Australia responded in Feb-2012 by splitting its corporate structuring into two different companies, one holding the domestic operations and the other its international operations. This allowed Virgin Australia to attract more foreign investors to fund its growth.

But instead Etihad has seen its share dilute slightly as a result of an overall dilution in shares caused by Virgin Australia’s acquisition of Skywest Airlines. ANZ has acquired additional shares to maintain a 19.99% stake and is now the biggest single shareholder in Virgin Australia. Fellow Star Alliance member SIA also acquired additional shares to maintain its original 10% stake just prior to its purchase of the additional 9.9% stake, taking its holding to 19.9% while independent Etihad now has less control with a stake of less than half the size.

Etihad’s opportunities to increase its stake close to ANZ and SIA levels seem limited given Virgin Group’s stated position that it has no plans to sell down further its remaining 12% stake. Etihad’s only option therefore may be to try to increase its stake by buying on the market. That could prove to be a lengthy slog given the tight held nature of Virgin Australia’s share register.

Etihad is unlikely to walk away from an alliance that provides feeder traffic from an important and growing Australian market. Likewise selling its stake in Virgin Australia would only serve to strengthen SIA’s hand and influence over Virgin Australia’s long-haul alliance strategy. That is, at least in appearance – the role of minority equity shareholdings is subjective and still being explored by airlines. Virgin Australia in particular is unusual in this respect, with three major airlines independently holding significant stakes.

The SIA move came quickly, perhaps catching Etihad by surprise. SIA only initially announced the acquisition of a 10% stake in Virgin Australia about six months ago, at the end of Oct-2012, cementing a relationship which began in Jun-2011 with the signing of a codeshare partnership. The codeshare, which was implemented in 1Q2012, initially was limited to SIA-operated flights within Asia-Pacific, including Australia and to South Africa as well as Virgin-operated domestic flights. Connections between Europe and Australia were intentionally not included initially as Virgin Australia sought to minimise overlap between its two partners.

The expansion of the SIA-Virgin Australia partnership to cover the Australia-Europe market was announced in Nov-2012, just three weeks after SIA moved to acquire an initial 10% stake in Virgin Australia, and was implemented in 1Q2013. SIA and Etihad are both now carrying the Virgin Australia code to several European markets, including London, Manchester, Paris, Frankfurt, Munich and Moscow. Two more overlapping markets are about to be added as Etihad launches services on 15-May-2013 to Amsterdam, a city SIA already serves, and as Virgin Australia implements recently secured authority to codeshare with both carriers to Milan.

SIA and Etihad were already competitors on the kangaroo route between Australia and Europe, as well as in the Asia-Europe market. The SIA-Etihad rivalry became even more intense on 24-Apr-2013 as SIA announced the purchase from the UK-based Virgin Group of another 255.5 million shares in Virgin Australia for AUD122.6 million (USD126.4 million), raising its stake in the carrier to 19.9%. The announcement came just one day after SIA affiliate Tiger secured approval from Australia competition authorities to sell a 60% stake in Tiger Australia to Virgin Australia. SIA owns a 33% stake in the Tiger Airways Group, which previously owned a 100% stake in Virgin Australia.

The initial announcement that SIA was buying a 10% stake in Virgin Australia came – not coincidentally – the same day (30-Oct-2012) the Tiger-Virgin Australia deal was initially announced. The two deals are linked as Virgin needed the cash to fund the purchase of a 60% stake in Tiger Australia as well as a 100% stake in Australian regional carrier Skywest.

The Skywest deal, which significantly improves Virgin Australia's access to the Western Australia regional market and the lucrative mining charter (FIFO, fly in-fly out) sector, has already been completed. The Tiger Australia deal is still contingent on final regulatory approvals, which are not expected to pose any challenge as the main hurdle has received Australian Competition and Consumer Commission approval.

SIA’s initial move to take an equity stake in Virgin Australia was also followed only six weeks later by the Dec-2012 announcement of the sale of the Singaporean flag carrier's 49% stake in Virgin Atlantic to Delta Air Lines. While SIA didn’t need the cash (SIA has one of the strongest cash positions in the global airline industry) its stake in Virgin Atlantic and its limited partnership with the UK carrier was no longer of any strategic importance, if indeed it had ever been. In contrast, the Virgin Australia partnership has evolved into a key component of SIA’s strategy, which seeks to build on its strong position within Asia-Pacific by expanding organically and through partnerships.

Virgin Australia is a key component of SIA’s new strategy

As part of its renewed focus on the Asia-Pacific region, SIA is diversifying its portfolio while reducing its reliance on long-haul markets to Europe and North America. SIA has recognised the higher potential growth in Asia-Pacific, including Australia. The group is attempting to exploit this growth and build on its already strong position within the region through a series of investments at both the top and bottom ends of the market.

At the bottom end, SIA has established and launched Scoot, which is primarily connecting Singapore with medium-to-long-haul markets in North Asia and Australia. Scoot has no short or medium term intentions of expanding outside the Asia-Pacific region. SIA also has increased its involvement in Tiger, which also only serves the Asia-Pacific region through Tiger Singapore and subsidiaries or affiliates in Australia, Indonesia and the Philippines.

At the top end, SIA mainline has been expanding capacity to Australia and select markets within Asia. Even more rapidly it has been expanding its full-service regional subsidiary SilkAir, which has been adding capacity at an annual rate of about 20%. SilkAir’s network is 100% focused on Asia-Pacific, including one destination in Australia, Darwin, which was launched in Mar-2012.

As CAPA reported previously, the SIA Group has increased seat capacity to Australia by over 40% since early 2012. This includes the launch of Scoot services to Sydney and the Gold Coast, the launch of SilkAir services to Darwin as well as additional capacity on most of SIA’s five mainline Australian routes, which include Adelaide, Brisbane, Melbourne, Perth and Sydney.

SIA is further increasing capacity to Australia over the next two months and in Jul-2013 for the first time will provide over 37,000 weekly one-way seats (excludes SilkAir and Scoot) in the market. Etihad also has increased capacity in recent months in the Australia-Singapore market, as it upgraded its Brisbane-Singapore-Abu Dhabi service to daily, but accounts for less than 3% of capacity between the two countries. 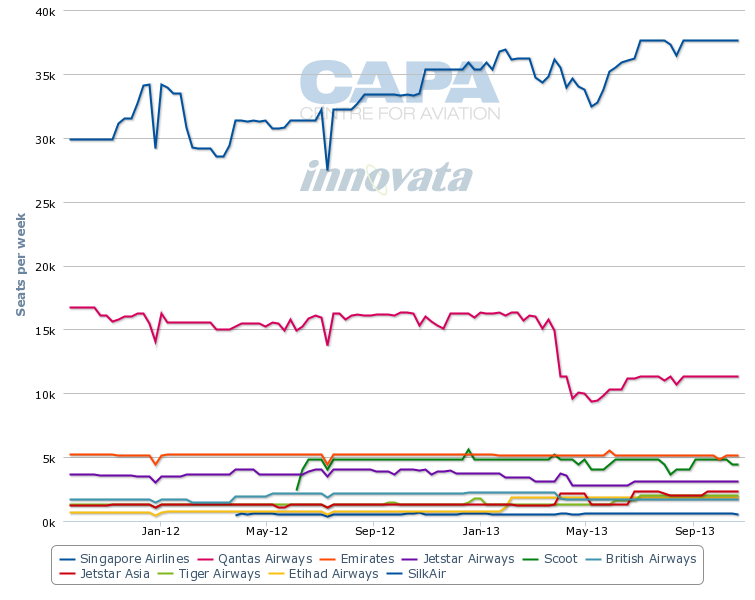 SIA accounts for a leading 54% share of seat capacity in the Australia-Singapore market and the SIA Group accounts for an even stronger 62% share (includes Scoot and SilkAir but excludes Tiger). Emirates and Qantas (including Jetstar and Jetstar Asia) account for about 31%. The Qantas share of seats in the Australia-Singapore market has reduced significantly in the past two months as the carrier has moved the stopover of its London flights from Singapore to Dubai, but this is slightly misleading as the amount of seats allocated to the local market has increased as previously about half of its Australia-Singapore passengers connected to European flights.

Virgin Australia currently does not serve Singapore, which makes the carrier even more appealing to SIA as it traditionally has not had strong partnerships with airlines that serve Singapore. It is no coincidence that SIA’s only joint venture partner, Scandinavia Airlines (SAS), no longer serves Singapore. SIA was also willing to work more closely with ANZ after ANZ stopped competing in the Auckland-Singapore route.

SIA is the third largest carrier in Australia’s international market after Qantas and Qantas’ new partner Emirates. SIA has even more international seats overall to and from Australia than Virgin Australia. 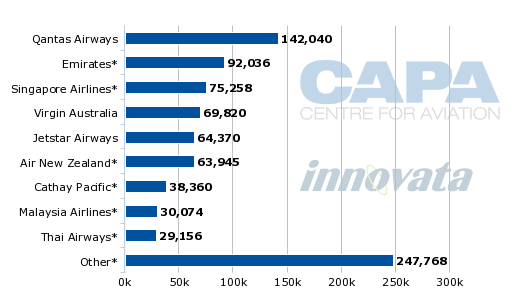 While Qantas and Emirates combined currently account for a powerful 29% of international capacity to and from Australia, Virgin Australia and SIA combined account for a respectable 17%. When adding in ANZ, Etihad and Delta, Virgin Australia can claim about a 25% share, putting it within range of the Qantas-Emirates duo – something which has more than statistical importance when it comes to bidding for corporate accounts. 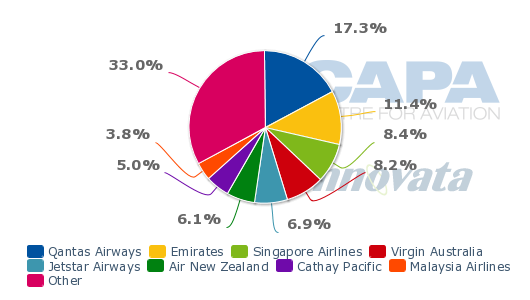 Virgin Australia will look to maintain its independence

SIA and ANZ are unlikely to further increase their shares in Virgin Australia as passing the 20% ownership threshold triggers a mandatory takeover bid. But with stakes slightly under 20%, they will be able share in Virgin Australia’s growth fortunes, which in turn is built off the back of the carrier’s diverse portfolio of bilateral alliances. Under Australia's open skies policy (excluding the four main gateways), the airlines are also able to place their codes on almost any through connection beyond their primary access points, giving much-enhanced GDS exposure.

For SIA, ANZ and Etihad their equity investments give them access to a greater share of Virgin Australia's financial performances than is available to them through their codeshare alliances alone. The access to Australia’s domestic market that Virgin Australia provides is crucial to all three carriers, particularly SIA and ANZ given their large operations to and from Australia. For SIA, the group has finally secured a beach-head in the Australian market some 13 years after the failed attempt to buy a 50% stake in Ansett.

But Virgin Australia will look to maintain its independence and likely resist any demand for board representation. If it agrees to allowing one partner appoint a board member, it could open itself to demands to make similar offers to all three – or at the very least SIA and ANZ. That would further complicate the management of competing demands from an already challenging group of cornerstone shareholders. With just four shareholders controlling about 60% of the shares Virgin Australia has an unstable share register, including three shareholders that are each either government owned or controlled.

Virgin Australia has built up an impressive portfolio of partners, providing it with a virtual network to take on Qantas and now the Qantas-Emirates combination, which could be seen as a response to Virgin Australia’s alliances with Etihad and SIA. The fact Virgin Australia’s three most important partners have valued the partnerships to the point they felt compelled to cement them by acquiring equity is a testament to the Virgin Australia strategy.

Virgin Australia's challenge is now to succeed at balancing its partners and shareholders – and the inherent potential conflicts. Managing conflicts, rather than avoiding them, appears to be becoming the benchmark for alliance performance, as individual airlines seek to leverage their own positions.