Virgin Australia has scored an important victory against Qantas in the battle for access to bilateral capacity between Australia and Italy, being awarded 300 of the 1000 weekly seats available on the route.

The Italy decision is likely to set the scene for other markets where Virgin Australia may seek to challenge Qantas’ dominant third country carrier codeshare seat allocation as they come up for review over the next few years. Both carriers are competing for bilateral seat capacity to maximise the benefits of their largely virtual networks to Europe.

Qantas had previously held Australia’s entire codeshare capacity entitlement on the Italy route under two determinations. The carrier had to have the first of these involving 600 seats renewed for a further five years by the Australia’s International Air Services Commission (IASC). The remaining 400 seats held by Qantas are not due for renewal until 2015, at which point it can expect a further challenge from Virgin Australia.

Qantas relinquishes 30% of its Italian codeshare capacity to Virgin Australia

The Virgin Australia capacity determination followed a decision by the IASC on 24-Mar-2013 to reduce the capacity held by Qantas to 700 third country codeshare seats in each direction on Italian routes.

Qantas agreed to return 300 seats per week by halving its original application for renewal of 600 seats, after the IASC expressed concern about the lack of codeshare capacity available for allocation to another Australian carrier on the route. Virgin Australia will have immediate access to the relinquished capacity while Qantas’ allocation for the remaining 300 seats has been renewed for a further five years, effective from Aug-2013.

The IASC also expects Qantas to return more capacity if it does not fully utilise the 700 seats it has available.

In its application to the IASC to renew the seat allocation, Qantas argued that as the incumbent it had first rights to the capacity. Virgin Australia, which has established close partnerships with Singapore Airlines and Etihad to provide European access, insisted it was entitled to a commercially viable share as a new Australian airline entrant on the Italy route.

Virgin Australia told the IASC in its application for 300 seats on the route that it had a “strong interest in commencing codeshare services to Italy” with Singapore Airlines (SIA) and Abu Dhabi-based Etihad.

There appears to be little prospect of Italy expanding the bilateral agreement with Australia, with the Australian Government having made unsuccessful representations to the Italian Government as recently as late 2012, Virgin Australia says.

Italy’s protectionist stance on maintaining the paltry capacity allocation with Australia is relatively unusual in the European context and is maintained despite its flag carrier Alitalia not operating on the route with its own metal. Alitalia does, however, codeshare with Etihad between Abu Dhabi and Sydney.

The combined inbound and outbound market of 215,000 travellers one-way makes Italy the fourth largest European route by traffic. The market also grew nearly 20% in the past two years, but despite this fares have increased.

Virgin Australia and Qantas operate largely virtual European networks through partner airlines. Until its global alliance with Emirates took effect in Mar-2013, Qantas used its Italian capacity on codeshare agreements with Cathay over Hong Kong and British Airways via Singapore and London. Qantas now operates the entire allocation on codeshare services with Emirates via Dubai after ending the arrangements with Cathay and British Airways.

But without codeshare capacity Virgin Australia would not have been able to effectively compete with Qantas and Emirates on the Italy route in the foreseeable future. Instead the carrier would have been limited to interlining with partners, leaving it at a substantial marketing disadvantage because interline seats do not show as prominently on travel agent bookings screens as codeshare seats.

Virgin Australia must fully utilise its Italy capacity by 26-Oct-2013, but the carrier is yet to announce exactly how it will divide the capacity between Etihad and SIA and between Rome and Milan.

SIA is the only option for Rome, which Etihad does not service. SIA flies to Rome three times per week from Singapore offering about 880 weekly one-way seats using Boeing 777-200 aircraft.

SIA offers five times weekly 777 frequencies to Milan with nearly 1,400 seats. Etihad is likely to be favoured for the Milan route as it operates daily to Milan from Abu Dhabi with A330-200s offering about 1,830 one-way seats.

SIA, which on 24-Apr-2013 announced it was increasing its stake in Virgin Australia from 10% to 19.9%, flies to five Australian destinations: Sydney, Melbourne, Brisbane, Adelaide and Perth. Its regional subsidiary SilkAir also serves Darwin.

SIA currently offers 34,000 one-way seats (excludes SilkAir) between Singapore and Australia, increasing to more than 36,700 in Jul-2013. Virgin Australia does not operate to Singapore. 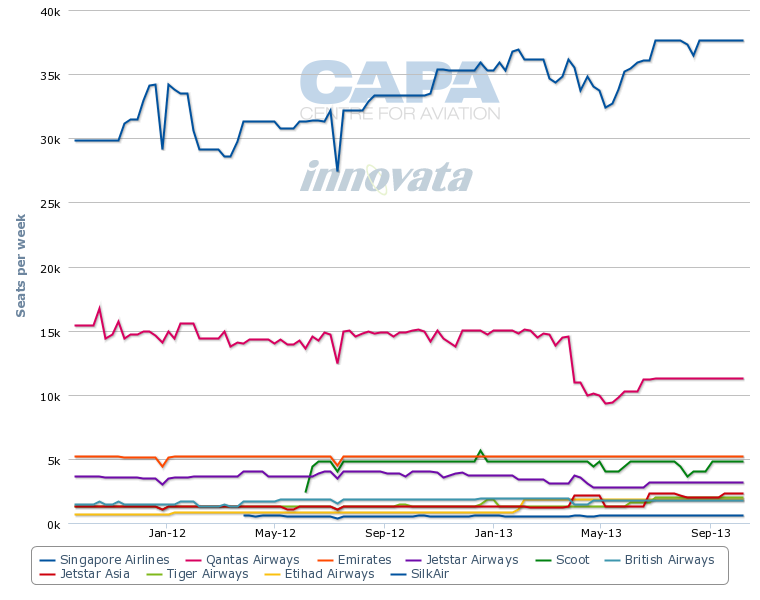 The Australia-Italy market is highly competitive. Foreign carriers serving the market with their own metal include SIA, Emirates, Etihad, Qatar Airways, Cathay, Thai Airways, Air China, Korean Air and British Airways. There are several other foreign carriers which serve the market using codeshares for part of all of the journey along with Qantas and soon Virgin Australia.

The Qantas-Emirates alliance has a much stronger position on the Italy route than the Virgin Australia grouping. Emirates offers 21 weekly frequencies to Milan and 14 weekly services to Rome, from Dubai. Emirates also serves Venice 14 times per week, but Australian carriers are limited to using their bilateral seats to the existing two points in Italy. 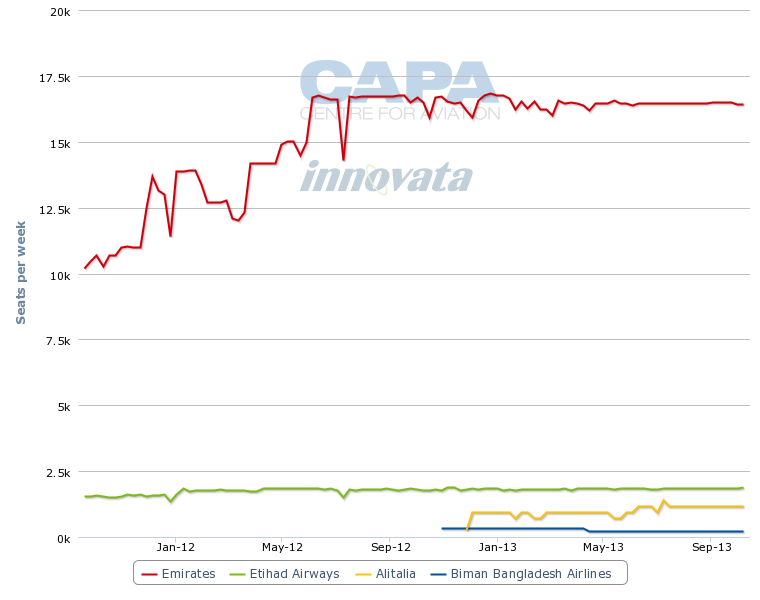 Under the Australia-Italy air services arrangements, Australian designated airlines also have the right to operate seven frequencies per week with any aircraft type. None of this capacity is currently allocated.

Qantas flew to Rome until 2003 when, in the face of unsustainable losses, it withdrew in favour of a codeshare with Cathay.

Qantas currently only has one online destination in Europe, London, having dropped service to Frankfurt on 15-Apr-2013. Virgin Australia has no intention of serving Europe with its own metal as both Australian carriers focus on instead expanding their European networks virtually.

Australia’s bilateral agreement with France allows a total of 400 one-way seats per day (2,800 per week), which has been fully allocated with Qantas operating 250 of those seats, averaged over 12 months, and Virgin Australia 150 seats. In addition up to three weekly 747-400 equivalent services can be operated by an Australian carrier on the route.

Qantas has moved its codeshare capacity for France from Air France and British Airways – both via Singapore – to Emirates operating via Dubai. Qantas’ allocation was last renewed for five years in May-2012. The carrier ceased flying to France with its own metal in 2004, when the codeshare with Air France took effect.

Virgin Australia uses its French codeshare capacity on both Etihad and SIA services to Paris. Its capacity is due for renewal in Oct-2015 while Qantas’ capacity does not come up for renewal until Mar-2016. France's growing market for Australia accounted for about 98,000 visitors in 2012, up some 3,500 on 2011.

Qantas swaps own operated services to Frankfurt for codeshare with Emirates

Qantas swapped its own daily loss-making services to Frankfurt for codeshare capacity on Emirates via Dubai on 15-Apr-2013. The carriers also codeshare on Emirates’ services to Hamburg and Dusseldorf.

Qantas and Virgin Australia are almost entirely dependent on their Gulf partners to provide network coverage to Europe. Both carriers have recorded significant increases in European codeshare bookings.

As such the competition for at times limited available capacity will intensify as Emirates and Etihad expand between the United Arab Emirates and Australia. The challenge for the IASC will be managing the new balance in the Australian international airline market. The commission’s decision to reallocate nearly a third of Qantas’ capacity on the Italy route demonstrates that Virgin Australia's international reach is coming of age.