Virgin Australia has been granted approval to buy a 60% stake in LCC Tiger Australia by the Australian Competition and Consumer Commission (ACCC) and in so doing puts in place the final piece of a puzzle that allows Virgin Australia to compete against the Qantas Group on a level footing.

The ACCC agonised over the ground-shifting decision with concerns that returning the Australian market to a duopoly would remove the benefits that Tiger Australia had brought as a third competitor when it launched in Nov-2007. The commission delayed its decision by nearly six weeks while it sought more information from Virgin Australia and Tiger Australia to provide the comfort it needed.

Ultimately ACCC chairman Rod Sims concluded that “this acquisition is unlikely to lead to a substantial lessening of competition in the Australian market for domestic air passenger transport services”.

Virgin Australia chief executive John Borghetti said: “By partnering with Tiger Airways, we can use our local expertise to build a sustainable budget carrier, which will offer great value airfares and benefit jobs and tourism in Australia.”

In the end the decision came down to whether Tiger Australia would remain in Australia if the deal were not approved. The ACCC heeded the warnings from the carrier’s Singapore owners and determined that it would not.

“Essential to reaching this view was the ACCC’s assessment, made after thorough and extensive testing of the issue, that Tiger Australia would be highly unlikely to remain in the local market if the proposed acquisition didn’t proceed. Absent this conclusion the acquisition raised considerable competition concerns.

“In making this assessment the ACCC had particular regard to Tiger Australia’s history of poor financial and operational performance. In six years in Australia, Tiger has never made an operating profit, and its current losses are large. These losses remain a big drag on the entire Tiger group,” Mr Sims said.

Rather than an expected improvement in profits, Tiger Australia reported a SGD13 million (USD16 million) operating loss in 3QFY2013, compared to a SGD9 million (USD11 million) loss in the same quarter in 2012. That led to Tiger Airlines Holdings chairman J.Y Pillay to state that: “We have concluded that TT is just too small a player in the Australian market and it would need massive resources to reach a critical mass.”

In addition to Singapore, Tiger has affiliates in the Philippines and Indonesia. The Indonesian affiliate, Mandala, in particular could potentially take on more aircraft given the growth opportunities in Indonesia and Mandala’s improved positioning following the demise of Batavia.

“The ACCC would always prefer to see a greater number of independent airlines competing in the domestic market. However, our investigations showed that Tiger Australia had been unable to establish itself as a viable competitor despite substantial investment and numerous changes of management and strategy over the years. We concluded that it was highly likely that Tiger Australia would leave the market if this acquisition didn’t go ahead, and accordingly blocking the acquisition would not serve to protect competition,” Mr Sims said.

Combining Virgin Australia and Tiger Australia returns the Australian market to a duopoly with Qantas, but one in which both groups have separate full service and LCC operations. The ACCC had been concerned that this arrangement could increase the likelihood of the two groups coordinating pricing and services. It would also remove competition between Virgin Australia and Tiger Australia, particularly in the off-peak periods favoured by more price sensitive leisure passengers.

But Mr Borghetti maintained that the deal would actually increase competition by allowing Virgin Australia to build a competitive and sustainable budget carrier able to compete more effectively against the Qantas Group. Tiger Australia provides Virgin Australia with a ready-made means to re-enter the LCC market that it has evolved away from in recent years in favour of competing head on with Qantas for a bigger share of the lucrative corporate and government travel market.

The growth of Jetstar, however, meant Virgin Australia had to either start up a new LCC or take over Tiger Australia to duplicate the Qantas-Jetstar domestic dual brand strategy. Without a low-cost arm Virgin Australia risked being caught in a pincer movement between Qantas and Jetstar, unable to compete for price sensitive leisure travellers at one end and lacking the scale to maintain its position against Qantas at the top end of the market.

Virgin Australia has argued that there is limited overlap between the customer segments it and Tiger Australia serve.

In response to the ACCC’s repeated publicly expressed concerns over the potential impact the removal of Tiger Australia as a third competitor might have, Mr Borghetti offered to give some “reasonable” capacity undertakings. But he ruled out guaranteeing that Tiger Australia would more than triple its fleet to 35 aircraft by 2018, as outlined in the application for authorisation. No airline would provide such a capacity commitment going out five years given the volatile nature of the aviation industry.

Indeed it would have been inconceivable – and totally antithetical to a deregulated marketplace – to impose a growth requirement on Virgin Australia (at least without requiring the same of its competitors, a highly unlikely proposition). The ACCC may have taken some comfort that Jetstar largely operates separately from Qantas with the parent at times undercutting the LCC subsidiary on some routes.

Finding a home for that amount of capacity in a market where cheap fares are no longer able to stimulate significant additional demand will almost certainly provoke a defence response from Jetstar. While that may provide the ACCC with some comfort that it has made the correct call, it will also place further pressure on yields and reduce profitability.

Tiger Australia has continued to steadily rebuild its network and capacity since relaunching in Aug-2011 following its six week grounding due to safety concerns. The airline commenced Sydney-Coffs Harbour in Feb-2013 in direct competition with Virgin Australia and Melbourne-Sunshine Coast in Mar-2013. In Apr-2013 Tiger Australia commenced Sydney-Cairns, Sydney-Alice Springs and Melbourne-Alice Springs, taking its total network to 17 routes across 12 destinations, of which Melbourne-Sydney is by far the biggest. 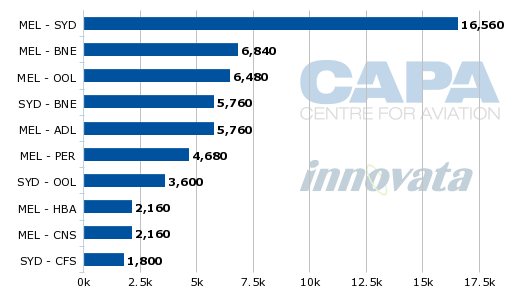 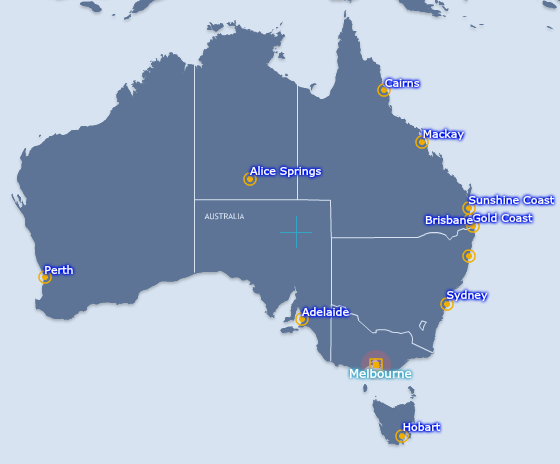 Virgin Australia accounts for just under 30% of domestic seat capacity in Australia. Tiger Australia’s 4.5% capacity share and Skywest’s just under 1% will increase the group’s combined market share to nearly 35%, compared to Qantas Group’s 61%.

Without Tiger Australia, Virgin Australia would probably have been constrained from growing above its minority share. 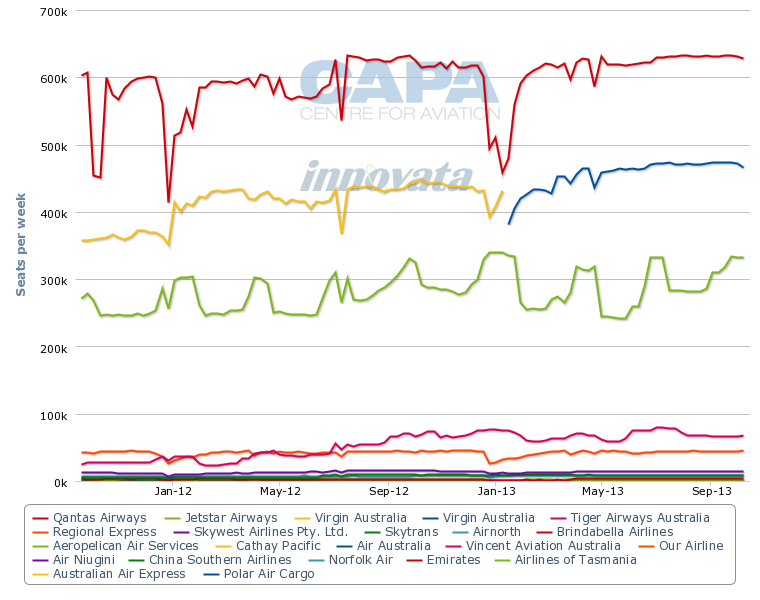 The ACCC was concerned that the combined market power of two large dual branded airline groups could deter a new airline from entering in the future. The reality, however, is that there is a continuing threat from the myriad of LCCs in the highly dynamic Asian market eager to take advantage of Australia’s liberal access regime.

The threat of entry from these airlines, such as AirAsia, Lion or Spring (or others that will spring up in the next few years) is real enough that no airline in Australia can afford to be complacent about tapping the lower end of the leisure market. If their costs, or fares, get too high, these ultra-low-cost airlines will gratefully seize the opportunity.

That said, the future market power of two comprehensively strong airline groups now in the Australian market will raise the bar somewhat for a entrant on a financially sustainable basis.

Skywest will allow Virgin Australia to take on Qantas’ massively dominant position on regional Australian routes across the country. It also brings in house Skywest’s fleet of 11 ATR72 turboprops which operated in its colours in Eastern Australia, while also providing access to the lucrative fly-in fly-out markets.

Tiger Australia will remain independent from Virgin Australia to preserve its pure LCC model. The two carriers will not engage in any network coordination, interlining or codesharing.

But just as Qantas and Jetstar seek to maximise their network potential according to their respective operating models, it seems inevitable that the pair will come to some accommodation on routes where they compete. Tiger Australia will also likely look to forge partnerships with foreign LCCs serving Australia, including Scoot. As Tiger Australia continues to build its network, offering connecting domestic services will appeal to foreign carriers that do not have local partners while providing Tiger with important incremental passengers.

Tiger Airways will record a one-off pro forma gain of about SGD120 million (USD96.7 million) based on the group’s financial position as at 30-Sep-2012. The transaction will also lift the group’s cash position by a further AUD35 million (USD35.8 million).

The transaction remains subject to certain conditions and additional regulatory approvals, including from the Foreign Investment Review Board. But with the ACCC backing now secured, the closing of the transaction is essentially just a formality.

Allowing the union between Virgin Australia and Tiger Australia was a marginal call for the ACCC and no doubt Mr Sims will closely watch developments. On the face of it the creation of a duopoly would be expected to lead to less competition and higher fares over time. But two airline groups competing with four brands may provide a more competitive symmetry than one large Qantas Group against two smaller competitors.

The first order of business is for Mr Borghetti to appoint a permanent CEO to Tiger Australia. The carrier has had a tumultuous two years since its temporary grounding. Stability in the management team with a focus on continuing rebuilding efforts and pursuing expansion should usher in a new era for Tiger Australia. But it will still be an era ripe with challenges, including intense competition, and profitability could remain elusive.