Virgin Australia is reaping the benefits of its global network of alliances, with a strong increase in interline and codeshare revenue in the six months to 31-Dec-2012, but lower yields in the embattled Australian domestic market meant the carrier posted a sharply reduced tax-paid profit of AUD23 million (USD23.6 million).

The carrier blames most of the AUD28.8 million (USD29.6 million) profit reduction on the introduction of the carbon tax levied on domestic flying. Lower domestic yields in a market suffering from over-capacity meant Virgin Australia was not able to recoup the AUD24.4 million of carbon tax through fares. The first half of FY2012 was also inflated by a one-off approximately AUD6 million gain from the Qantas grounding in Oct-2011.

Revenue growth slowed to 5.4% in the first half in FY2012 to AUD2.1 billion (USD2.16 billion), from 18% growth in the first half of FY2011, despite a flood of capacity entering the market as Virgin Australia and Qantas battled for government and corporate market share.

Passenger numbers across the group reached a record 10 million in the half.

Virgin Australia CEO John Borghetti said: “Over the half, we have maintained our strong focus on positioning the company for profitable growth. We have outlined a multi-faceted plan that includes expansion in the high-growth regional and budget markets through the proposed acquisition of Skywest Airlines and the proposed acquisition of 60 per cent of Tiger Australia. If approved, the Virgin Australia Group will have the lowest cost-base in the full-service, budget and regional markets”.

Alliances are a cornerstone of Virgin Australia's strategy – a total of 73 new codeshare destinations were added in the six month reporting period and at least another 24 are planned in the second half of the financial year. 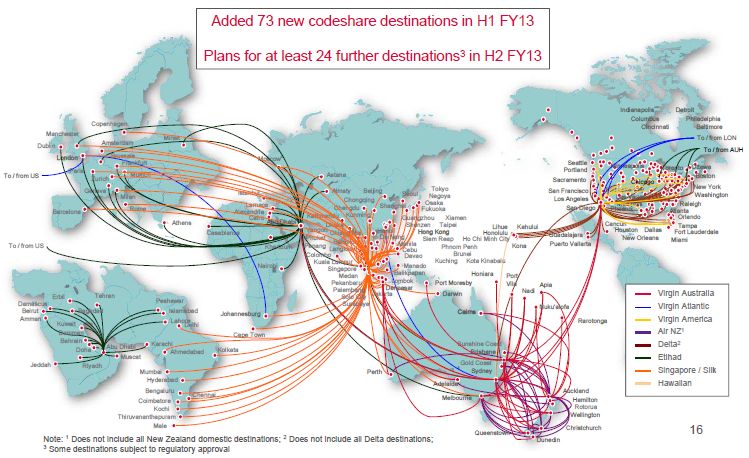 These relationships have provided Virgin Australia with a strong virtual network without the need for expensive investment in aircraft of its own.

Interline and codeshare revenue grew 56% in the half year. Much of that was for sales on the domestic network made by alliance partners. These sales are “cream on the cake” because the revenue is earned with little or no additional cost being incurred. As the alliance network grows, this revenue is projected to grow dramatically.

International EBIT was AUD35.4 million (USD36.4 million) up from AUD32.2 (USD33.1 million) on a 7.9% increase in revenue to AUD595.4 million (USD611.9 million) as the turnaround of the business continued and its alliances with Etihad, Singapore Airlines, Delta and Air New Zealand came on stream. Total passenger number was up 100,000 to 1.4 million.

Mr Borghetti said Virgin Australia was on track to earn AUD40 million (USD41.1 million) in revenue in FY2013 from its alliance network. He also expects to exceed the previously announced target of AUD150 million (USD154.1 million) from interline and codeshare sales by FY2015

Virgin Australia is taking full advantage of Qantas decision to switch its hub for European services from Singapore to Dubai as part of its alliance with Emirates, announcing it will expand its Europe codeshare with SIA to Sydney, Melbourne and Brisbane in 3QFY2013.

Mr Borghetti said the carrier wanted to give passengers the choice of travelling to Europe via Singapore or the Middle East with Etihad. This is undoubtedly a plus for customers – but will need to be carefully managed to account for the partially overlapping interests of two of its partners on these routes.

The battle for the domestic market moves to the regions

The attack on Qantas' supremacy is progressively coming under attack on numerous fronts. Virgin Australia announced it will break Qantas’ monopoly on the Brisbane-Moranbah and Brisbane-Bundaberg routes. The carrier will launch three ATR services per weekday in Apr-2013 between Brisbane and coal mining town Moranbah, and daily ATR-72 services between Brisbane and Bundaberg in May-2013.

Year-round fares would be about 15% cheaper than current fares to Moranbah and about 20% cheaper to Bundaberg, Mr Borghetti said.

In addition Virgin Australia will on 15-May-2013 replace two of its weekday Brisbane to Perth Boeing 737-800 services with A330-200s, adding capacity and allowing it to better compete with Qantas on the route.

An additional three ATR-72s will be delivered by FY2015, taking the fleet to 19. These aircraft will be aimed at the lucrative regional market, where Qantas has enjoyed a massively dominant and often monopoly position.

Qantas is of course not standing still either; on 22-Feb-2013 it moved to shore up its position on regional routes in New South Wales, including adding capacity to two monopoly routes between Sydney and Tamworth and Sydney and Armidale.

Negative factors in the domestic market were the new carbon tax which is levied on domestic flights, which helped drive down domestic EBIT to AUD49.3 million (USD50.7 million), down from AUD87 million (USD89.4 million), as well as the reduced yields in a market suffering from over capacity.

Virgin Australia increased capacity on the domestic routes by 8.9%, in line with guidance. Most of the increase was on transcontinental routes to Perth where widebody A330-200s replaced Boeing 737-800, which were described as unsuitable and uncompetitive on the route. Capacity was also increased on the golden triangle routes of Sydney, Melbourne and Brisbane as well as on regional routes.

Mr Borghetti pointed the finger at the Qantas group for capacity growth levels on domestic routes that were the highest since the launch of Jetstar in 2004, causing a 10.8% overall increase in the half year. 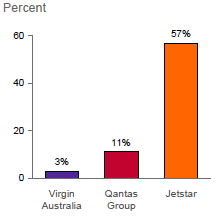 Virgin Australia now plans to increase capacity by between 5% and 7% over the second half of FY2013, including the new routes announced.

Virgin Australia has maintained its 20% share of corporate and government revenue achieved in FY2012. Having achieved its target revenue from the business travel market, Virgin Australia is no longer updating this figure other than to say that it is increasing. Qantas again is fighting a tough battle for this valuable market segment, claiming last week to have won at least two corporate clients back from Virgin. However, with the addition of Virgin's new fitouts, business class passengers increased nearly 92% in the half compared to a year earlier.

“The Sabre system will accelerate our growth in the corporate, government and high yield markets. With the stabilisation of load factors following the change in our business model and further growth in higher yield markets, we anticipate improved RASK performance going forward” Mr Borghetti said.

Sabre has also allowed Virgin Australia to launch round-the-world fares with SIA and more are planned with other alliance partners, filling an important gap in the airline's product range.

Virgin Australia reduced costs by AUD25 million (USD25.7 million) in the half and is on track to achieve AUD60 million (USD61.7 million) by the end of FY2013, and AUD200 million (USD205.6 million) a year by FY2015. Underlying CASK reduced by 1.5% (excluding fuel) despite extensive investment in product and services.

Virgin Australia launched a three-year Game Change programme at the beginning of FY2011 to reposition the business for a more stable future. The major targets have been achieved a year ahead of schedule in FY2012. The carrier has moved to the next phase of its development programme focusing on realising the benefits of the complete overhaul of the business in the previous two years by driving growth through product and service improvements.

The proposed (and already approved) takeover of Perth-based regional carrier Skywest and the acquisition of a controlling stake in LCC Tiger Australia will provide Virgin Australia with a lower cost base than the Qantas Group, Mr Borghetti said.

Mr Borghetti remained confident that the competition regulator will approve Virgin Australia’s proposed acquisition of a 60% stake in LCC Tiger Australia, reiterating that the deal will increase competition to the benefit of consumers. “By partnering with Tiger Airways, we can use our expertise to leverage Tiger Australia’s low cost base and build a competitive and sustainable budget carrier.”

Virgin Australia and Tiger Australia’s parent, Singapore-based Tiger Airways, announced the deal on 30-Oct-2012 as part of a trifecta that also included buying all of Western Australian regional carrier Skywest and SIA taking a 10% equity stake in Virgin Australia.

Tiger Australia would provide Virgin Australia with a ready-made LCC platform to take on Qantas and Jetstar across all market segments in a similar two-brand strategy.

The deal also throws a lifeline to beleaguered Tiger Australia which has yet to make a profit in Australia. Tiger Airways has strongly indicated that if the ACCC does not approve the equity deal, it may close its Australian operation. It has said it will not seek new investors for the venture if the deal is not approved.

Under Virgin Australia’s stewardship, Tiger Australia would undergo rapid expansion, building its current fleet of 11 A320s to up to 35 over the next five years, ensuring there will be no let-up in the domestic capacity war. Tiger Australia will continue to operate as a stand-alone entity with its own air operators certificate (AOC).

But Australian Competition and Consumer Commission (ACCC) chairman Rod Sims is concerned the AUD35 million (USD36.6 million) proposed merger will remove the third player in the aviation market. However he has said that the risk of Tiger Australia leaving the market will be a significant factor in the regulator’s final decision due on 14-Mar-2013.

The ACCC is currently seeking comments on what is likely to occur in the event the proposed acquisition does not proceed and the potential competitive effects the acquisition may have on price sensitive leisure travellers. The ACCC is also seeking feedback regarding the reduction in the number of airline groups and the loss of competition from Tiger as an independent low-cost carrier, if the proposal is approved.

The takeover of Western Australian based regional operator Skywest has been approved by the ACCC and is now awaiting approval from Skywest shareholders and the Singapore High Court. The deal is expected to be completed by the end of Apr-2013.

Skywest also operates a fleet of eight ATR 72 turboprop aircraft on behalf of Virgin Australia as part of their 10-year strategic alliance under the Australian Regional Airline Network (ARAN) agreement, which was signed in Jan-2011.

On yet another front, Virgin Australia’s Velocity Frequent Flyer programme added another 500,000 members, taking the total to 3.5 million as the carrier marches on to achieving a target of five million members by the end of FY2015. 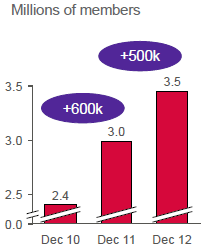 The programme has 400 partners with reward redemptions growing 48% in the six month period.

Virgin Australia has built a strong international network covering Southern Asia, the Middle East, Europe and North America. But like Qantas, Virgin Australia will now need to turn its attention to finding a partner in Northern Asia which is able to connect the increasingly important Australia-China routes. While SIA and its hub at Singapore are ideal for Southeast Asia, India and Europe, they are not efficient for North Asia.

Cathay Pacific is considered an ideal fit, but the Hong Kong-based carrier is notoriously independent. Cathay Pacific is also a member of oneworld along with Qantas, but those two carriers have never seen eye to eye and Cathay Pacific could well relish the opportunity to compete with Qantas while also gaining access to the Australian domestic market. (And on the basis that my enemy's enemy is my friend, Cathay has just announced a new codeshare arrangement with British Airways to serve Australia over Hong Kong. Australia is Cathay’s largest long-haul market after North America.)

China Southern has also made public overtures to Virgin Australia and is rapidly expanding its presence in the Australian market from its Guangzhou base, just inland from Hong Kong.

Qantas and China Eastern are meanwhile keen to build on their partnership in Jetstar Hong Kong, to be launched in the second half of 2013, by establishing a codeshare between Australia and China. 2013 looks likely again to be distinguished by partnering – and partner hunting.