In a ground shifting move for the Australian domestic market Virgin Australia announced on 30-Oct-2012 three equity deals in one day that will see the carrier come full circle with the acquisition of a 60% stake in low-cost carrier Tiger Australia and 100% of regional operator Skywest. The two acquisitions will be funded through capital raised by selling a 10% stake in Virgin Holdings to the Singapore Airlines (SIA) Group.

The transactions, if approved by regulators, mean Virgin Australia will be able to better compete with Qantas on all domestic fronts. The transactions also breathes new life into Tiger Australia, which has been unprofitable since it was established in 2007 and particularly since it was grounded for five weeks in 2011 by Australia’s safety regulator. With Virgin Australia now in control, Tiger Australia expects to expand its fleet from 11 A320s to 35 A320s over the next five years, giving it the aircraft needed to add more domestic bases and possibly launch regional international services.

The moves by Virgin Australia also mark the half-way point in the airline group’s five-year “game change strategy” and reinforces the carrier’s strategy of picking its partners according to its own needs.

The group has already expanded its international network through partnerships with Etihad, Singapore Airlines, Delta Air Lines and Air New Zealand. The new joint venture with Tiger allows it to re-enter and compete again in the budget sector of the market, which it exited as Virgin Australia (previously LCC Virgin Blue) hybridised and moved upmarket in attempts to compete more effectively against archrival Qantas in the corporate sector. The acquisition of SkyWest, meanwhile, significantly improves Virgin Australia’s position in Australia’s important regional and lucrative mining charter markets.

In just a couple of years, Virgin Australia has come full circle and completed the puzzle. Now it faces the equally challenging task of leveraging the synergies created from all the transactions and delivering sustainable profits, a goal it aims to meet by the completion of its five-year “game change strategy”. 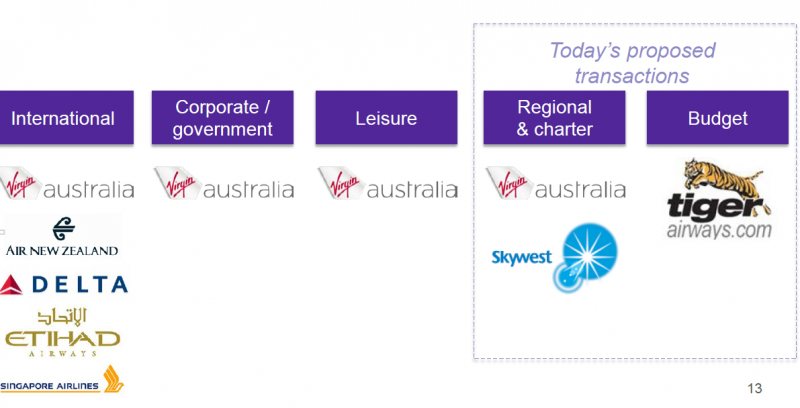 The investment from Singapore Airlines is a natural extension of a partnership it initially forged with Virgin Australia in Jun-2011. The two carriers have since implemented a comprehensive codeshare arrangement covering the Asia-Pacific region and Australian domestic market, which SIA was keen to access to gain access to destinations beyond its five Australian gateways. The SIA Group since the partnership began has added a sixth Australian gateway, Darwin, with service operated by its regional subsidiary SilkAir and supported with a Virgin Australia codeshare.

Singapore Airlines will join Etihad, which also has a 10% share, and Air New Zealand, which has a 19.99% stake, as equity partners. Together with the UK-based Virgin Group’s 26% cornerstone shareholding, the airline will now be nearly 66% foreign owned.

Tiger Airways Group executives told analysts it has been assured by Virgin Australia that Tiger Australia will be able to launch international services under the new structure. Tiger has lobbied over the years for a change in Australian ownership regulations to allow for foreign-owned airlines to operate international routes, a restriction which put it at a disadvantage to rival Jetstar.

Tiger Airways Group executives say that while Tiger Australia now plans to explore potential international routes for now it will be focused on expanding domestically. The carrier plans to pursue expansion of its existing domestic bases, Melbourne and Sydney, and open up new bases as its fleet expands.

Tiger Airways Group executives told analysts that it is confident larger economies of scale will reduce Tiger Australia’s costs and help turn around the unprofitable carrier. Tiger Australia struggled to achieve profitability before it was grounded and has continued to face challenges since resuming operations in Aug-2011.

Tiger Australia incurred an operating loss of SGD20 million (USD16.4 million) in revenues in the quarter ending 30-Sep-2012. For Tiger's fiscal first half ending 30-Sep-2012 the operating loss was SGD41 million (USD33.6 million) (see Background Information). Tiger warned in an analyst presentation on 30-Oct-2012 to discuss its 2QFY2013 results that "competition between the larger airlines in the Australian domestic market is expected to continue to keep yields under pressure in the near term".

Tiger Australia is not about to overtake Jetstar, which currently accounts for 19% of capacity in Australia’s domestic market and continues to expand as Australia’s largest LCC. But it will likely close the gap with Jetstar and perhaps more importantly significantly boost overall market share for Virgin Australia as a group. 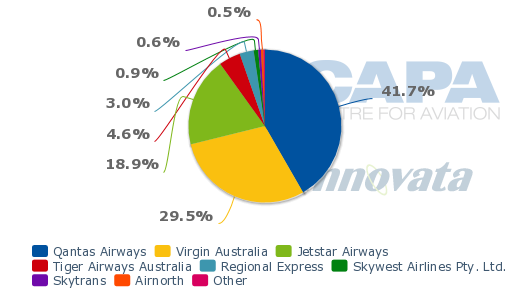 But it is difficult to see how the proposed capacity increase at Tiger Australia will be absorbed in a market where cheap fares are no longer able to stimulate significant additional demand. Tiger executives have already been complaining in recent quarters that intense competition in Australia’s domestic market has put pressure on yields and made it difficult to achieve profitability.

The Virgin Australia-Tiger Airways Australia agreement is subject to regulatory approval, including from the Australian Competition and Consumer Commission and the Foreign Investment Review Board. As part of the agreement the carriers propose to enter into a shareholders agreement, brand licensing agreement and service agreement.

Tiger Australia does not envision cooperation with Virgin Australia

Tiger Airways Australia will be independent and is not expected to engage in any network coordination with Virgin Australia. The two carriers also say they do not plan to pursue interlining or codesharing and that the pure LCC model at Tiger Australia will be retained.

Virgin Australia and Tiger Australia compete on a number of routes and it seems inevitable that the pair will sort out the most efficient way to move passengers between given points, although details of any such plans and what form they might take will be kept close until the regulators have given their blessing.

It has already been decided that Virgin Australia CEO John Borghetti will serve as Tiger Airways Australia chairman for an initial two-year term. The chairmanship will rotate every two years and be nominated alternately by the two shareholders.

The Tiger Airways Group will nominate two board members and appoint Tiger Australia’s new CFO. The sixth board member will be independent. 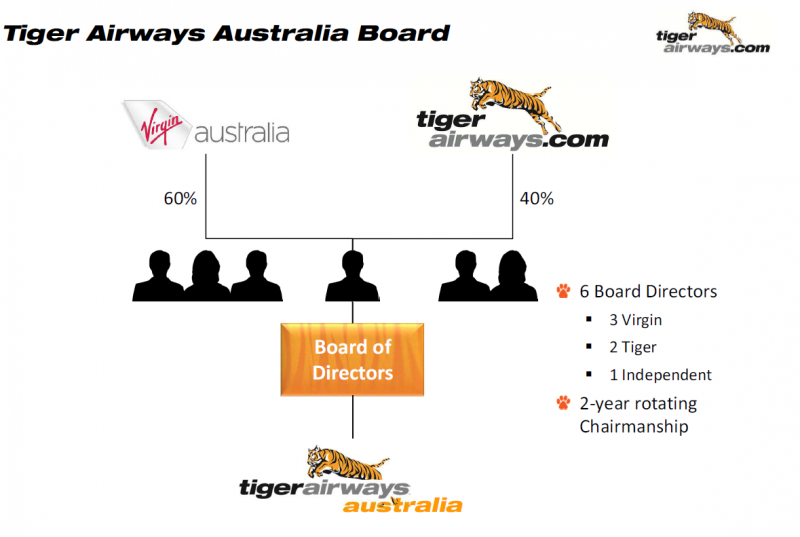 But with Virgin Australia in control of the new Tiger Airways Australia, it would seem a re-branding could be considered later. Virgin Australia has a much stronger brand and has built the company with the brand as the top priority. Tiger was never nearly as strong a brand in Australia and its brand suffered in 2011 during the grounding.

SkyWest to be re-branded Virgin Australia

Virgin Australia has already unveiled plans to re-brand SkyWest in Virgin Australia’s colours although the carrier will continue to operate under its current Air Operator’s Certificate (AOC). SkyWest will also continue to have the same management team, lead by CEO Jason Bitter, and be based in Perth in Western Australia.

The SkyWest transaction will allow Virgin Australia to accelerate growth in the fly-in-fly-out (FIFO) mining charter sector, expand its regional network and enter the corporate charter market. SkyWest currently operates a fleet of 20 aircraft consisting of A320s, Fokker F100s and Fokker F50s. The carrier transports about 800,000 passengers a year throughout Western Australia as well as to Darwin, Melbourne and internationally to Denpasar on the Indonesian island of Bali. 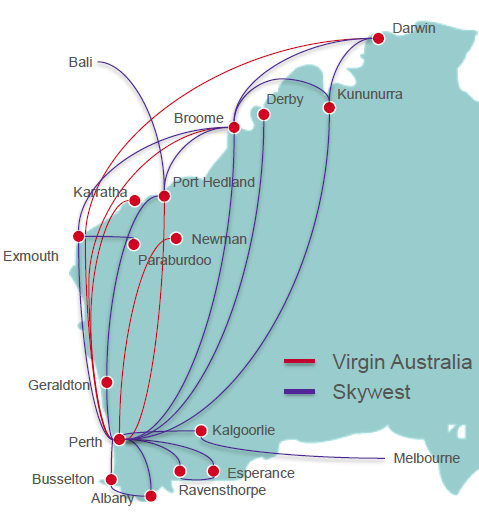 SkyWest also operates a fleet of eight ATR 72 turboprop aircraft on behalf of Virgin Australia as part of their 10-year strategic alliance Australian Regional Airline Network (ARAN) agreement, which was signed in Jan-2011. The two carriers also already codeshare on each other’s domestic networks. The partnership between the two carriers led to Virgin Australia earlier this year unveiling plans to acquire a 10% stake in SkyWest.

Virgin Australia says the SkyWest acquisition allows it to gain direct operational control of the ATR 72 fleet that already flies under Virgin colours as well as “fast track” growth in regional markets in Western Australia.

This SkyWest deal is also subject to regulatory, legal and shareholder approvals, including approval by the Australian Competition and Consumer Commission and the Securities and Industries Council of Singapore. (SkyWest is a Singapore-listed company).

The third transaction sees SIA take a 10% stake in Virgin Australia through the placement of 245,570 million shares at AUD0.4288 per share for a total of AUD105.3 million (USD109 million) and will see ties between the airlines strengthen further.

Australian Foreign Investment Review Board (FIRB) approval was already obtained for the purchase, which is expected to be completed on 16-Nov-2012. In 2011 Singapore Airlines and Virgin Australia entered into a long-term partnership which included codesharing, reciprocal frequent flyer programme benefits, coordinated schedules and joint sales, marketing and distribution activities. The airlines are planning to expand their codeshare agreement further, with details to be announced in due course.

While Tiger executives refused to comment on whether the SIA-Virgin Australia and Tiger-Virgin Australia deals were linked, the two are clearly intertwined as the SIA Group has been hands-on since the Tiger Australia grounding in trying to rebuild and restore profitability at Tiger.

The rebuilding effort at Tiger has been led by chairman JY Pillay, a former SIA chairman and visionary who has played an active role at Tiger over the last year. The joint venture with Virgin Australia instantly improves the outlook for Tiger Australia. As Virgin Australia needed new capital to fund the acquisition, SIA was certainly more than happy to oblige.

A controlling stake in Tiger Australia gives Virgin Australia a ready-made LCC platform to take on Qantas and Jetstar across all market segments. Virgin Australia in recent years has evolved away from its own LCC origins as Virgin Blue and become a full service network carrier.

Tiger Australia will continue to operate as a stand-alone entity with its own air operators certificate (AOC), which on 19-Oct-2012 had all restrictions removed by regulator CASA relating to its six week grounding in mid-2011 due to "immediate and imminent" safety concerns.

Tiger Australia grew its monthly passenger numbers to 227,000 in Sept-2012, surpassing for the first time the pre-grounding level of 212,000 passengers carried in Jun-2011. Its network is back to seven destinations, with Mackay to be added in Dec-2012 from Melbourne and Sydney. 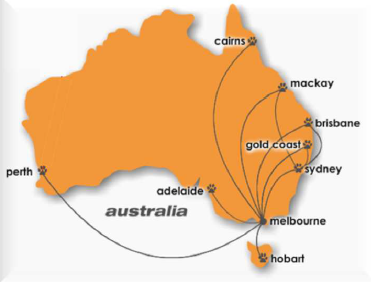 Mr Borghetti understands that it will require a strong case to win over the Australian Competition and Consumer Commission (ACCC) to allow Virgin Australia to remove two independent competitors from the market and to all intents and purposes return the Australian domestic markets to a duopoly with Qantas. He argues that there will be no significant lessening of competition because Virgin Australia does not compete against Tiger Australia in the LCC arena, nor does it have a substantial position in the charter and fly-in fly-out (FIFO) markets it will inherit from SkyWest, and it has only a small presence on regional routes.

Virgin Australia’s bold play sets the group up as an even stronger competitor to Qantas. The achievements of Virgin Australia under Mr Borghetti have been impressive and significant. The acquisitions of SkyWest and Tiger Australia completes Mr Borghetti’s fast-moving puzzle. Now it is time to focus on delivering profits.