Transaero, Russia’s fourth largest carrier, is pursuing further growth across its domestic and international networks. Transaero will be operating a 20% larger schedule in summer 2013 compared to summer 2012 with considerable expansion in Eastern Europe and Central Asia.

The carrier’s widebody fleet, which is already the largest in Russia, is set to increase over the next several years, leading to further ambitious expansion across its medium and long-haul network. The carrier already operates a widebody fleet of about 50 aircraft consisting of 747-300/400s, 767-200/300s and 777-200/300s, and plans to take three new types over the next few years – A380s, 747-8Is and 787s.

While currently ranked as the world’s 100th largest airline based on seat capacity data from CAPA and Innovata, Transaero is bound to significantly increase its position as it continues to rapidly grow its fleet and network. Transaero could potentially overtake UTair and S7 and become Russia’s second largest carrier after Aeroflot. It is already the country’s second largest international carrier.

Transaero is currently Russia’s fourth largest scheduled carrier based on seat capacity, with almost 172,000 weekly seats (112,000 international and 60,000 domestic). This gives Transaero a 9% share of the country’s total scheduled seat capacity, just marginally behind UTair. S7 is also only slightly larger, with an 11% share, while Aeroflot is much larger, with a 25% share.

The airline’s international presence has also increased over the past 12 months from almost 63,500 scheduled weekly seats for the week commencing 09-Apr-2012. As a result its domestic and international scheduled seat capacity is up by 70% on a year-over-year basis, according to CAPA and Innovata data, making it one of the fastest growing airlines in the world. (Transaero also has a large charter operation.)

Transaero’s scheduled network currently includes 83 destinations, including 52 outside Russia, according to Innovata data. It allocates 65% of its seat capacity to the international market and the remaining 35% to the domestic market. In comparison, Russian flag carrier Aeroflot currently serves 114 destinations, including 80 outside Russia, and allocates about 60% of its scheduled seat capacity to the international market.

Transaero’s international network includes 18 destinations within Schengen Europe, 16 in Asia-Pacific, seven in non-Schengen Europe, four in North America (including the US and Canada), three in Africa and one in the Middle East. 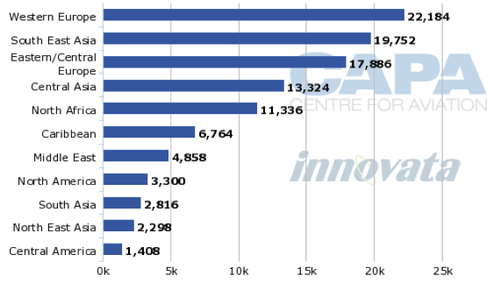 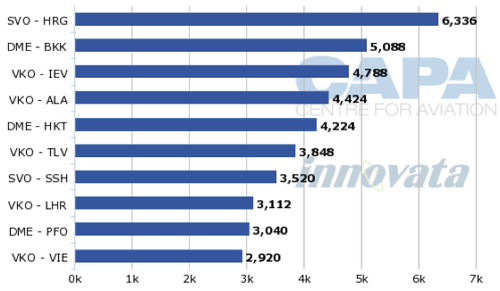 On Transaero’s top 10 international routes, it only currently faces direct competition on two of the routes – Moscow Domodedovo-Bangkok Suvarnabhumi service and Moscow Vnukovo-Kiev Zhuliany service. The remaining eight routes are all currently solely operated by Transaero. When taking into account all three Moscow airports, Transaero currently indirectly competes with other airlines on six of the routes – Bangkok, Kiev Zhuliany, Almaty, Tel Aviv, London Heathrow and Vienna.

Domestically Transaero faces a significant amount of competition from a number of small and large Russian carriers such as S7 Airlines, Rossiya, Ural Airlines and UTair. Of the airline’s top 10 domestic routes, it currently faces competition on six, with it being the sole operator on four – Moscow Vnukovo to Vladivostok, Khabarovsk, Blagoveshchensk and Magadan. But all of these routes are served by other carriers from other Moscow airports, giving Transaero indirect competition. 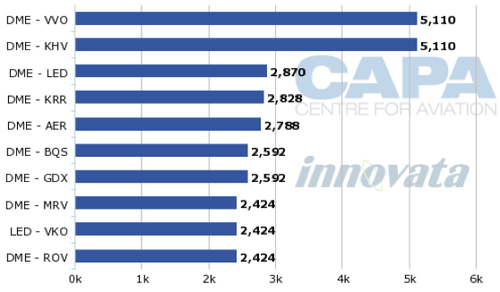 Domodedovo is Transaero’s main hub with increasing focus on Vnukovo

Moscow Domodedovo Airport will see increased traffic feed onto Transaero services in the future with the recent signing of an interline agreement with Emirates. The agreement will allow Emirates' passengers to connect onto Transaero-operated services to eight Russian cities. These include Yekaterinburg, Krasnodar, Novosibirsk, Rostov-on-Don, Sochi, Yuzhno-Sakhalinsk, Khabarovsk and Vladivostok. Emirates’ only routes into Russia are currently from Dubai to Moscow Domodedovo and Saint Petersburg. Sister low-cost carrier flydubai, however, currently serves several other Russian destinations including Yekaterinburg.

Transaero is now focusing on expanding its operations at Moscow Vnukovo, having signed a memorandum of strategic cooperation with the airport in Feb-2012. Since the agreement was signed the airline has carried over 220,000 passengers through Vnukovo and the airport opened a technical operations centre for the airline’s 747 and 777 equipment in Sep-2012. The next phase of the cooperation will see Transaero create a transit centre at Moscow Vnukovo Airport in order to improve passenger connectivity and experience.

Over the past two years Transaero’s Moscow airport strategy has changed from having its main base at Moscow Domodedovo Airport to now operating a substantial amount of its network at Moscow Vnukovo Airport. Increasing traffic, particularly transit traffic, and having technical operations for widebody aircraft at Vnukovo signifies the airport’s importance in Transaero’s overall strategy.

At this stage Transaero seems to be splitting its international services between Domodedovo and Vnukovo, however focusing international expansion at Vnukovo while operating the majority of its domestic network from Domodedovo. Moscow Sheremetyevo meanwhile has a similar international to domestic split to Moscow Vnukovo.

Steady fleet growth for Transaero over the coming years

Transaero currently operates a fleet of 93 aircraft with another six aircraft currently in storage, according to the CAPA Fleet Database. The airline’s fleet consists entirely of Boeing aircraft except for three Tupolev Tu-204-200 aircraft.

Note: 747-8 order not listed because only an MOU has been signed and as a result order has not yet been finalised
Source: CAPA Fleet Database 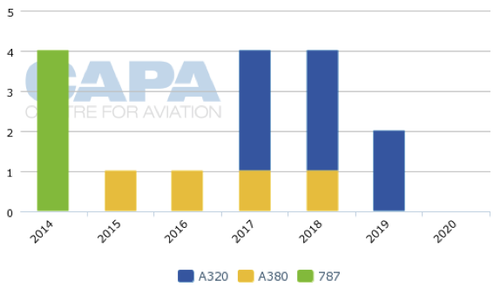 Transaero’s widebody fleet have high density layouts, with its recently upgraded 747-400s being configured with 12 business class seats and 510 economy seats. The aircraft are placed primarily on leisure routes and are used on the airline’s extensive charter programmes to Southeast Asia and the Americas.

The airline’s A380 aircraft on order are to feature a three class cabin layout, seating approximately 700 passengers in a high density layout. The airline plans to use the aircraft on high traffic long-haul routes from Moscow such as Bangkok. Further widebody aircraft may be delivered in the coming years including four Boeing 747-8Is which it agreed to purchase in Nov-2011 (however not yet on firm order as so far only an MOU has been signed).

The airline also plans to lease 12 additional Boeing 737-800 narrowbody aircraft from Sberbank Leasing from 2015. The aircraft will be used on both domestic and international routes.

Transaero’s network continues to grow with a number of new routes to be launched in the summer 2013 season across the airline’s various markets including Eastern Europe, Central Asia, Western Europe and the Americas. Most of the network expansion is from Moscow Vnukovo Airport though Moscow Domodedovo Airport will also see some network expansion. Transaero has stated that its summer 2013 network will be 20% larger than it was in 2012, with 20% more destinations to reach 190 in total (includes charter destinations).

Domestically in Russia, Transaero is expanding its network from Moscow Vnukovo. The airline launched six times weekly service to Krasnoyarsk on 31-Mar-2013 followed by six times weekly service to Omsk and daily service to Novy Urengoy on 01-Apr-2013. With the suspension of Red Wings’ operations, Transaero will mainly compete with UTair on domestic routes from Moscow Vnukovo, including on its new services to Krasnoyarsk and Omsk. Gazpromavia Aviation will be Transaero’s only competition on service to Novy Urengoy for the moment.

Within Eastern Europe Transaero is particularly expanding its Russia-Ukraine links. It launched six times weekly services from Moscow Vnukovo to Kiev Zhuliany and Odessa on 31-Mar-2013. The airline also plans to launch twice weekly services from Perm, Ufa and Yekaterinburg to Kiev Zhuliany on 20-Apr-2013. UTair and UTair Ukraine will be Transaero’s main competitor on Russia-Ukraine services.

Transaero is the only carrier serving Kazakhstan from Moscow Vnukovo. But it does face some indirect competition from Kazakhstani carriers Air Astana (from Moscow Sheremetyevo) and SCAT (from Moscow Domodedovo).

Transaero is also expanding its Western European network in summer 2013 from Moscow Vnukovo with the launch of four times weekly service to Frankfurt in Germany and twice weekly service to Madrid Barajas in Spain on 31-Mar-2013 (increasing to six times weekly from 05-Jun-2013) and one weekly flight to Lisbon in Portugal on 15-Jun-2013. Transaero will face competition on all of these routes, mostly indirectly, from both Russian and Western European carriers.

Transaero previously operated to Cancun and New York JFK from Moscow Domodedovo Airport however decided to transfer the service to operate from Vnukovo. Other route transfers have also recently occurred including the transfer of Moscow-Odessa operations from Domodedovo to Vnukovo and the consolidation of Transaero’s services to London Heathrow from Domodedovo and Vnukovo to operate just from Moscow Vnukovo.

In the coming months there will be further network expansion including the launch of service to Tokyo Narita. Transaero recently received approval to operate twice weekly Moscow Domodedovo-Tokyo Narita service over the summer season, with the service to launch on 25-May-2013 and be operated until 29-Sep-2013. This will be operated alongside weekly Moscow Domodedovo-Hong Kong service, effective 30-Jun-2013 to 30-Sep-2013.

Transaero will also be operating an extensive charter programme in summer 2013, not only from Moscow, but from 21 Russian cities in total. There are over 60 planned charter routes for the summer 2013 season.

Moscow and Saint Petersburg will see the majority of charter services to leisure destinations in Bulgaria, Croatia, Cyprus, Egypt, Greece, Jamaica, Montenegro, Portugal and Spain. Other Russian cities such as Novosibirsk, Blagoveshchensk, Vladivostok, Kemerovo, Khabarovsk and Yuzhno-Sakhalinsk will see charter services to destinations further abroad including to Bangkok and Ho Chi Minh City.

Vnukovo base to become more important aspect of Transaero’s operations

Transaero’s planned fleet and network expansion will see it strengthen its position in Russia’s top five airline rankings while increasing its presence in new international markets. With steady growth from Moscow Vnukovo Airport, the airline’s operations will soon catch up to the level it already offers at Moscow Domodedovo Airport.

In the coming years the airline’s long-haul fleet will expand significantly with new A380s, 787s and most likely 747-8s. It could join Lufthansa as the only carrier operating all three types.

New A320neo and 737-800NG aircraft will modernise the airline’s narrowbody fleet, enabling further European and Central Asian expansion. The narrowbody fleet will also enable Transaero to close the gap with larger competitors domestically although it also frequently uses its widebody fleet across its domestic network.

While currently barely in the top 100 global airline rankings, Transaero will steadily move up the list and into the global spotlight. Currently the carrier, which remains privately owned and unaligned, captures relatively little attention outside its home market. This will change as the airline continues to pursue rapid growth and further strengthen its network in Europe, Asia and the Americas.