Russia’s largest passenger carrier Aeroflot is entering 2012 with a clear aim in sight of achieving 36% market share in Russia by 2015 and 40% market share by 2020. This goal is looking increasingly achievable as the planned takeover of more Russian regional carriers will give it a 33% share of capacity in the market.

Fleet expansion at Aeroflot is planned to ensure further increases in market share over the next several years. The flag carrier’s outlook for 2012 and beyond is also looking bright after recording strong results for the nine months ending Sep-2011.

Aeroflot initially revealed on Oct-2011 plans to increase its market share to 36.3% by 2015, 40.4% by 2020 and 45.4% by 2025. To meet these goals, Aeroflot is increasing its expenditure over the next several years. In 2012, there will be further aircraft acquisitions and network development, both internationally and domestically.

An increase in market share will be achieved by the absorption of Russian regional carriers and fleet expansion, which will allow for further development of the group’s international and domestic networks. In Nov-2011 the Aeroflot Group took controlling stakes in Rossiya, Kavminvodyavia, Orenburg Airlines (also known as Orenair), Vladivostok Air, Saratov Airlines and SAT Airlines, all carriers that were previously owned by the Russian Technologies State Corporation. The deal gave the Russian Technologies State Corporation a 3.55% stake in Aeroflot.

Aeroflot subsequently decided to sell in late Dec-2011 its 51% stake in Saratov Airlines to private investors due to the airline not being in line with the wider group’s strategic vision. Rossiya, Kavminvodyavia, Orenair, Vladivostok Air, and SAT Airlines all are now part of the Aeroflot group, which also includes Donavia. Earlier this month, Aeroflot stated the group transported 20 million passengers in 2011, including 14 million passengers by Aeroflot itself. 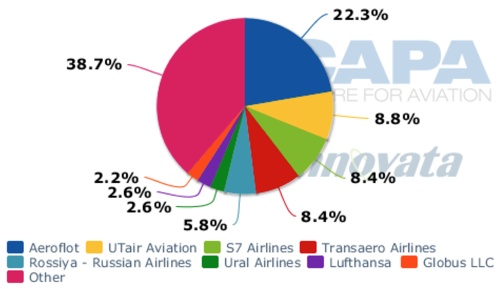 Rossiya is based out of Saint Petersburg Pulkov, where it currently has a 42.6% capacity share, according to Innovata data. Aeroflot is the second largest carrier at Pulkov with a 9.7% share of capacity.

The other acquisitions are spread out across Russia with Orenair based in the southwest Russian city of Orenburg and operating domestic and central Asian services. Orenair is currently the seventh largest domestic carrier out of Moscow Domodedovo and accounts for 1% of total capacity in the Russian market.

Also in southern Russia is Kavminvodyavia, which is based in the Caucasus region, serving 20 destinations across Russia and into Eastern Europe. Saratov Airlines is also located in southern Russia, operating domestically and into central Asia.

From these acquisitions, the Aeroflot group gains more coverage across southern and far eastern Russia and now controls over half of the available capacity at Saint Petersburg Pulkovo, Vladivostok Knevichi and Yuzhno-Sakhalinsk Khomutovo airports. Only Rossiya, Vladivostok Air and Orenair significantly contribute to Aeroflot’s goal of increasing market share because Kavminvodyavia, SAT Airlines and Saratov Airlines combined account for less than 1% capacity in Russia.

Aeroflot could face a speed bump on its mission to reach market share of over 35% as the head of Russia’s Federal Anti-Monopoly Service (FAS), Igor Artemiev, has stated the agency “might prohibit Aeroflot from undertaking any mergers or acquisitions in the future if its share on the domestic market exceeds 35%”. This could limit the carrier’s growth in the future, particularly in relation to its goals of achieving 40.4% and 45.4% market share by 2020 and 2025, respectively.

Aeroflot to expand and modernise fleet

Aeroflot has 87 aircraft on order scheduled for delivery up until 2015, consisting of 30 regional jets (Sukhoi Superjet 100), 16 medium-haul aircraft (A320s and A321s), and 41 long-haul aircraft (A330s, Boeing 777s and 787). Some of these will be used to replace older types in the fleet (including Ilyushin II-86s and Tupolev 154s) while the remainder will serve as expansion to the fleet.

Some of the regional and narrowbody aircraft on order will also be used to modernise some of the subsidiary carrier fleets. Further orders may also be placed within the next few years including potentially A380s, which Aeroflot is considering acquiring. Aeroflot would become the second Russian carrier after Transaero to order the A380.

Aeroflot’s fleet is now almost all-Western built aircraft with its Ilyushin II-96-300 and SJ100 aircraft contributing only 7.3% of the total fleet, as of 3Q2011.This will increase with future SJ100 deliveries.

As a result of the intensive capital investment being undertaken, Aeroflot warned when releasing its 3Q2011 financial results late last month that it expects its net profit in 2012 to decline year-on-year by RUB1045 million (USD33 million). The airline recorded an incredibly positive result for the nine months to Sep-2011, with net profits up 35% and revenues up 27% (see Background information).

Aeroflot remains the most dominant Russian carrier both internationally and domestically. It has a clear dominance in the international market while the domestic market is somewhat different as there is a much higher level of competition from local carriers. The difference is due in part to Aerflot having the sole rights to operate particular international services, being the Federation’s flag carrier. 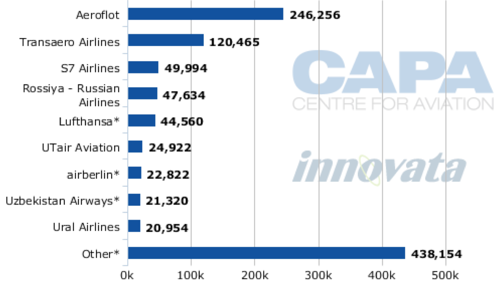 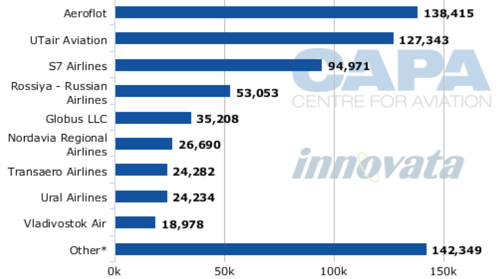 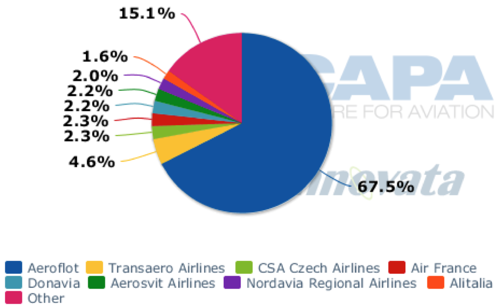 Aeroflot, which has also reported a 24.5% year-on-year increase in passengers through the first 11 months of 2011, is not the only Russian carrier to report positive results for the first three quarters of 2011. Transaero also performed well, particularly in cargo. Transaero, which is based at Moscow Domodedovo, passenger traffic over the nine months ending Sep-2011 rose 29.5% year-on-year while cargo volumes rose 30.2% for the same period. Aeroflot reported a 3.7% decrease in cargo volume carried over the Jan-2011 to Nov-2011 period.

In releasing its 3Q2011 results, Aeroflot compared its performance with other European airlines including Lufthansa, Air France-KLM and Turkish Airlines, all of which posted less favourable results compared to Aeroflot.

Financial comparisons with other European carriers: nine months to Sep-2011

One of the key advantages for Aeroflot over these other carriers is it does not face the level of low-cost carrier competition that these carriers do. Russia has a very low LCC penetration rate at approximately 3.2% overall, with only one home-based LCC, Sky Express, following the bankruptcy of Avianova in Oct-2011. 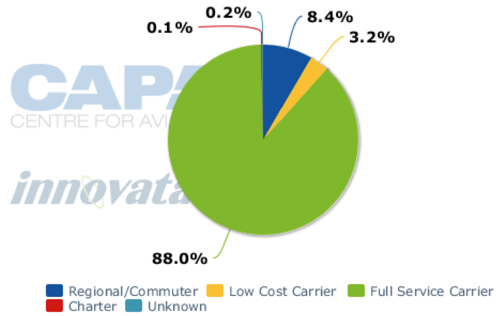 International LCCs also have a limited presence in Russia with airberlin being the largest LCC passenger carrier operating into Russia with 23,000 weekly seats. Despite the potential LCC opportunities in Russia, Aeroflot stated in Oct-2011 it is not planning to launch its own LCC until airport charges are reduced for smaller carriers.

Aeroflot last month reported a 27% increase in revenues for the nine months to Sep-2011 to USD3.56 billion, while operating costs rose by 30% to USD3.03 billion. The revenue rise was due to increasing passenger volumes while expenses continued to increase. EBITDA for the first three quarters of 2011 increased by 14% which led to a strong increase in net income for the period of 35% to USD472 million.

Despite a large increase in operational costs, the carrier’s revenue gains offset these and resulted in a significant increase in net profit for the period. Aeroflot’s expanded international and domestic network led to passenger gains for the carrier with new destinations and increased frequencies in important markets across Europe.

Through the first 11 months of 2011, Aeroflot carried 24.5% more passengers for a total of 13 million, consisting of 8 million international and 5 million domestic passengers. Passenger load factor also saw an increase of 0.3% to 78.5%. Cargo saw the only negative result for Aeroflot with a 3.7% decrease in cargo volume and 1.1% decrease in load factor for the 11 months ending 30-Nov-2011, according to Russia’s Federal Air Transport Agency.