Transaero is continuing to encroach on Aeroflot’s territory with the recent expansion in capacity as part of revised bilateral agreements between the Russian Federation and Western Europe. Traditionally, Aeroflot, as the Russian flag carrier, was the only airline allowed to operate key international routes from Moscow, however, this is beginning to change with expanded bilateral air services agreements with other nations that allow for a second carrier to compete on particular routes. Most recently Russia’s Federal Air Transport Agency held negotiations with Italy and France for the liberalisation of air services, which will see each country allowed to have a second carrier compete on key routes.

Based at Moscow Domodedovo Airport, Transaero is Russia’s second largest airline following Aeroflot. It focuses on on international operations, where its network is the second largest in the country although its domestic network is the sixth largest. Transaero has been rapidly expanding both its network and fleet and has filed route applications to operate five new services to Italy and France. In France it has filed to operate from Moscow to Paris Charles de Gaulle and Nice while in Italy it is looking to launch services from Moscow to Rome Fiumicino, Milan Malpensa and Venice Marco Polo.

While Transaero is showing interest in these short- and medium-haul routes where Aeroflot has held a monopoly, its main focus is still on long-haul leisure markets. Its fleet plans also show this as its order book is almost entirely filled with widebody aircraft. 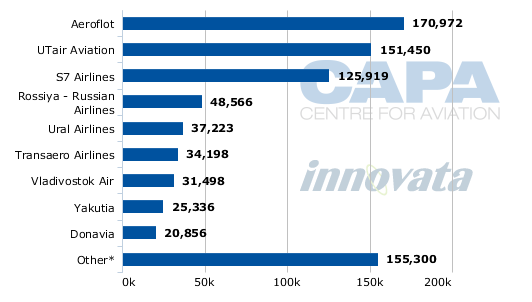 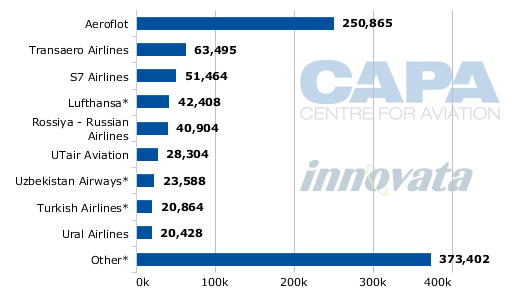 Transaero has requested capacity for Milan Malpensa, Rome Fiumicino and Venice Marco Polo, all of which Aeroflot already operates on. The Italian-Russian bilateral was expanded to allow Russian carriers to operate 28 weekly return frequencies from Moscow to Rome as well as 28 between Moscow and Milan. 14 of the frequencies are set aside for the existing designated carriers.

Aeroflot is already fully utilising that capacity, offering double daily services from Moscow to both Milan and Rome. Both of Aeroflot’s Milan frequencies and one of its Rome frequencies are operated by A321 aircraft (the second Rome service is operated by A320s), which is the largest narrowbody aircraft in Aeroflot’s fleet, indicating Aeroflot has had few expansion opportunities left. Transaero has not disclosed how many of the frequencies it has requested for Milan and Rome. It could, pending government approval, operate up to two daily services for each city. Any unused capacity would be welcomed by Aeroflot. Other undisclosed agreed routes can see up to 80 weekly frequencies from each country.

Alitalia is currently the Italian carrier designated to operate from Rome Fiumicino and Milan Malpensa to Moscow, which it serves at Sheremetyevo. Alitalia in Apr-2012 has seven weekly flights between Milan and Moscow, 16 between Rome and Moscow and two between Turin and Moscow.

The imbalance between Aeroflot and Alitalia is noteworthy. Alitalia has most of its Moscow flights originate at Rome, its base, whereas Aeroflot balances Milan and Rome. Milan is typically favoured by Russians due to financial links as well as high-end shopping an increasing number of Russians have been taking up in recent years. However, both carriers are members of SkyTeam and codeshare on each other’s services. Even though the two have a competitive advantage due to their scale, demand from Russia appears high enough to support Transaero’s proposed services.

Paris and Nice capacity requested in France by Transaero

Air France is currently the only carrier designated to operate from Paris Charles de Gaulle to Moscow. Air France typically operates five daily flights between Paris and Moscow and four weekly services between Marseilles and Paris. Aeroflot and Air France codeshare on each other’s Paris services (but not Marseilles and Nice).

Under the expanded agreements, Alitalia and Air France may see second carriers competing on these routes from their own nations. Russian newspaper Kommersant reported in Feb-2012 that Air Dolomiti was evaluating new services from Italy to Russia following the expanded bilateral agreement.

Russia and Germany are also reportedly in talks to remove restrictions on air services between the countries. The current bilateral air services agreement between Russia and Germany allows for each country to designate three passenger carriers and two cargo carriers to operate between 10 points in each country. This is unlikely to affect Transaero to a great degree as it is already authorised to operate from Moscow to Berlin Tegel and Frankfurt. Russia has also expanded a bilateral with Portugal, although there is low capacity, with Transaero offering only a weekly service. Russia has shown itself willing to expand bilaterals, although they are complicated by overflight rights and the country’s opposition to the EU Emissions Trading Scheme (EU ETS).

Transaero continues to focus on long-haul with fleet expansion

Transaero’s recent fleet expansion has focused mainly on widebody aircraft for its long-haul services, catering to the growing appetite of the enlarged middle-class group of Russians for intercontinental travel. Most recently the airline finalised an agreement to purchase four Boeing 787-8 aircraft. Transaero says the aircraft will be placed on domestic routes as well as longer international routes.

The airline also has four 747-8i and four A380s on order, following orders in Nov-2011 and Oct-2011 respectively. The A380 are reportedly to be configured in a high-density layout with approximately 700 seats to serve strong leisure routes. In Feb-2012 Transaero CEO Olga Pleshakova stated the airline expects to receive its first 787 in 2014, first A380 in 2015 and its first 747-8 in 2016. Transaero is also making new purchases for narrowbody aircraft, order eight A320neos in Dec-2011 for short- and medium-haul services, the first of which is due for delivery in 2017.

Ms Pleshakova also said the airline is negotiating with Singapore Airlines for the purchase of seven 777-300 aircraft. The airline previously purchased 777-200 and 747-400 aircraft from Singapore Airlines. Ms Pleshakova said, "we don't have a fixed date (to sign the deal) because the current aircraft on our fleet are adequate for us and that's why we aren't in a hurry”.

Transaero’s two main markets are currently North Africa and Southeast Asia, followed by Eastern Europe. The airline is targeting the leisure market, with its fleet plans indicating its focus on the long-haul leisure market while some of its previously seasonal leisure routes have been extended to operate for a longer period. Recently the airline announced its twice weekly service to Mauritius would operate year-round while it extended its Kuala Lumpur service to operate longer than originally planned. 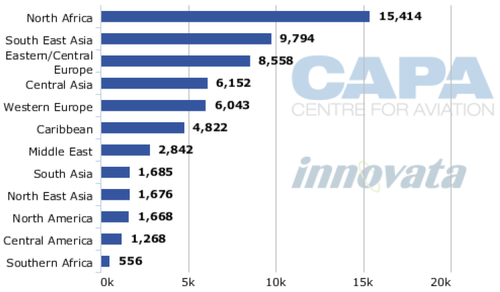 Transaero is planning to expand its Moscow operations from its current base at Moscow Domodedovo to launching services from Moscow Vnukovo from May-2012. The airline signed a 10-year agreement with the airport which focuses on providing support and infrastructure to the airline’s large aircraft on order including A380, 747 and 777 equipment. Transaero said it would not transfer all its operations to Moscow Vnukovo.

Aside from its expanding network and fleet, Transaero is trying to attract more passengers to choose the carrier over Aeroflot through improvements to its in-flight product. In Feb-2012 it announced plans to equip 38 of its aircraft with in-flight internet access with its first 777 aircraft to offer the service from Apr-2012. The upgrades are expected to require at least USD30 million of investment.

Russian airline traffic data for the year ending Oct-2011 showed while Transaero carried 4.5 million less passengers than Aeroflot, its growth rate was 4.6% higher than the national carrier, at 28.5%. Transaero’s load factor was also 4.8% higher than Aeroflot’s, at 83.3%. Transaero’s summer schedule is also displaying the airline’s continued growth, with growth 24% larger than in 2011.