Russian network airline traffic continues to rebound, but without LCCs

Russia is becoming a serious force in aviation through the significant growth reported in both passenger and cargo transportation over the last 11 years. It is no surprise, partly considering the massive land area the Russian Federation covers, that aviation is increasingly seen as an efficient way for mass transportation of people and goods across the nation and further afield.

2009 saw the first decrease in passengers carried in the century’s first decade, with numbers declining 9.5% to 45.1 million. However starting in the following year, traffic rebounded with positive figures reported in 2010. The rebound is continuing in 2011, according to the latest traffic figures released by Russia’s Federal Air Transport Agency. The figures show overall growth in both passenger and cargo volumes in the 10 months to Oct-2011, including a 12.3% year-on-year increase in passenger numbers.

This growth comes from the nation’s network carriers, with low-cost operators making hardly any noise in the market. Despite the ever-increasing demand for air travel, Russia still does not have a significant level of low-cost carrier penetration from home or foreign carriers, and the LCC sector took a step back earlier this year with the bankruptcy of Avianova.

Domestic and international traffic is almost evenly split in the Russian market. 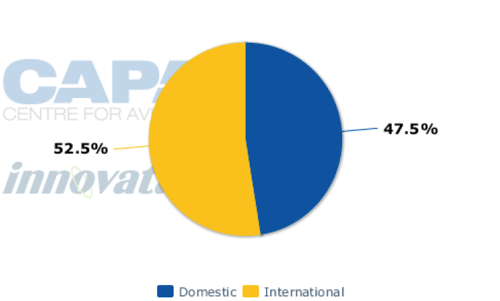 The five largest Russian carriers in terms of passenger numbers for the 10 months to Oct-2011 were (in order) Aeroflot Russian Airlines, Transaero, UTair, S7 Airlines (Siberia Airlines) and Rossiya. 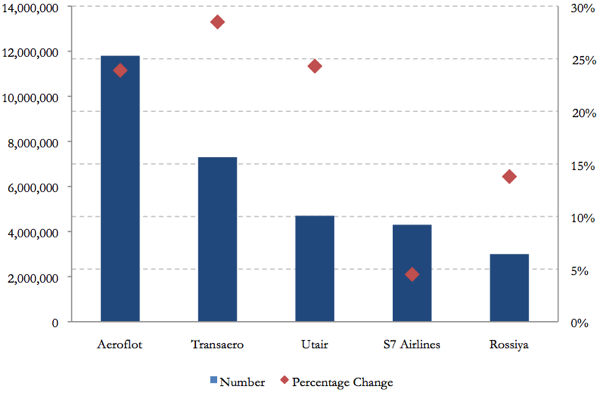 Transaero, which announced orders for B747-8i, A380 and A320neo aircraft over Oct-Nov-2011, led the pack with a passenger traffic increase of 28.5% year-on-year, carrying 7.3 million passengers. The airline also boasts the best passenger load factor of 83.3%, though down by 1.8% in the period compared with the previous year.

The national carrier Aeroflot had a favourable result of a 23.9% passenger number increase to 11.8 million and an increase of passenger load factor of 0.3% to 78.5%. Moscow Vnukovo-based UTair reported the second highest passenger traffic increase of 24.3% to 4.7 million, although it saw a reduction in load factor with a drop from 78.2% to 73.6%, a 4.6% decrease.

Overall Aeroflot is the most dominant Russian carrier both internationally and domestically. The other carriers have either a domestic or an international focus. Transaero is dominant in the international sector as second behind Aeroflot, but falls to fifth place on the domestic ranking. UTair’s Russian capacity over 05-Dec-2011 to 11-Dec-2011 shows a stark contrast between its domestic and international operations with nearly 113,000 seats available on domestic services than international, placing it as the second largest domestic carrier in Russia. S7 Airlines appears at number three in both rankings, however, still has a much stronger internal Russian network than an international one.

Lufthansa is the only western carrier to rank in the top nine airlines for international capacity into Russia, with just under 40,000 seats available during the week ending 11-Dec-2011, placing it between S7 Airlines and Rossiya at number four. 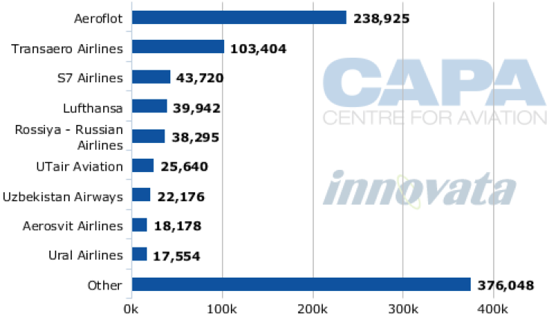 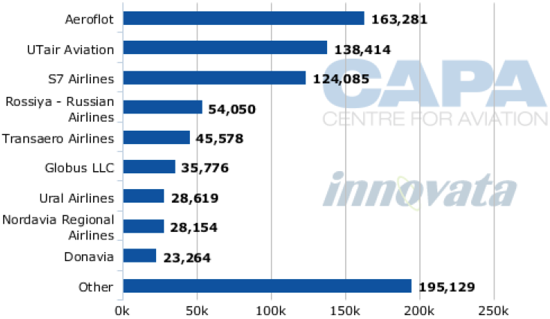 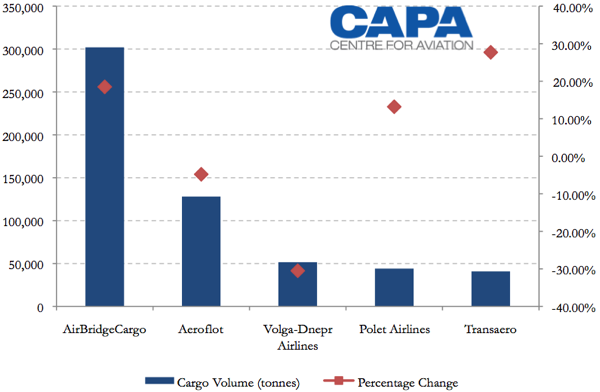 Results among these carriers were more varied than those of its passenger carrier counterparts. The most dramatic movements were those of Transaero and Volga-Dnepr Airlines. Transaero reported the most positive result with a 27.7% increase in cargo volume carried during the 10 months to Oct-2011 year-on-year to 40,783 tonnes compared with Volga-Dnepr Airlines which reported a 30.5% decrease in cargo volume carried to 51,561 tonnes over the same period.

AirBridgeCargo, Russia’s largest cargo carrier, is a wholly-owned subsidiary of Volga-Dnepr Airlines and reported an increase of 18.5% to 302,038 tonnes carried for the period year-on-year, though load factor dropped by 1.9% to 71.1%. This load factor is still much higher than the following largest cargo carriers which range from 41.2% (Polet Airlines) to 63.7% (Transaero).

Russia has not seen the rise of LCCs to the same extent as many Eastern and Western European nations. It has the lowest LCC penetration rate of BRIC countries (about 5% compared to Brazil's 52% and India's 58%). The state now has only one local low-cost carrier, Sky Express, following the bankruptcy of Avianova in Oct-2011. Avianova had been in business for only 20 months, and during that time carried more passengers across a wider network with higher load factors than incumbent Sky Express. Avianova's 22% growth outpaced the system growth of 15%, and Avianova was Russia's 11th largest carrier.

Avianova's bankruptcy was not due to deteriorating conditions but shareholder disputes that culminated with JV partner Indigo pulling out of the carrier and withdrawing funding. Despite this, Russia's incumbent full-service carriers claim the market is not suitable for LCCs. They point to long flight distances and their impact on reducing utilisation rates as well as a limited number of trunk routes. There is also unpredicatable regulation, which Avianova experienced when it reduced seat count on its A320s to pay a lower import tariff.

International LCCs have also had limited impact on the Russian network carriers thus far. The largest LCC, by passenger numbers, that operates into Russia is airberlin, which has 13,678 seats available over 05-Dec-2011 to 11-Dec-2011. 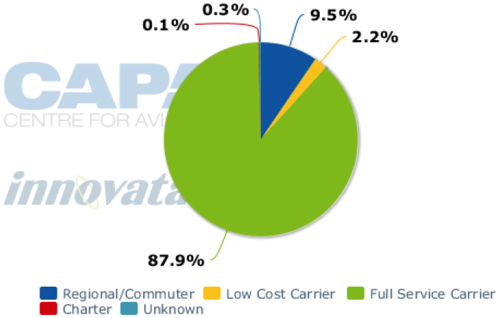 The outlook for 2012 is very good for Russian passenger carriers with positive traffic increases in 2010 and 2011 following a significant dip in 2009. This positive operating environment in Russia can also be seen through aircraft orders books, including Transaero’s recent orders for four 747-8i, four A380 and eight A320neo aircraft over the past two months. Transaero can be expected to take delivery of second-hand aircraft prior to delivery of its new aircraft in order to continue growing.

Despite the positive results for the passenger carriers, cargo operators have not performed as well across the board, with two of the top five carriers reporting decreases in cargo volumes carried year-on-year. Low average cargo load factors and declining volumes transported depict a negative freight environment in Oct-2011 compared with the previous year. This echoes a global downturn in cargo volumes, likely to continue into 2012.

The domestic low-cost carrier market faced a setback with Avianova’s bankruptcy in Oct-2011, leaving Sky Express as the state’s sole LCC. It also remains to be seen if international low-cost carriers will become a more dominant force in the Russian Federation.

Russia is a market to watch across the network, cargo and low-cost carriers, with a huge population that is demanding more travel options both at home and abroad.

For a market profile on Russia, see related article: Russia can lay claim to being one of the world's most dynamic air transport markets