The Paris terrorist attacks on 13-Nov-2015 interrupted a healthy year of traffic growth at Paris Orly Airport but did not prevent it from posting record passenger numbers for the year. Its traffic suffered more in the global downturn than that of its larger sibling airport, Paris CDG, but it also recovered more strongly. However, Orly's growth has been slower than CDG's in the past two years, since Air France's network cuts at its number two airport have offset LCC expansion there.

As a low cost market Orly is relatively small, but it has the distinction of being an important base for the LCC subsidiary of two of Europe's Big Three legacy airline groups. It is the second largest base for Air France-KLM's Transavia, and the third largest for IAG's Vueling. However, both have much less capacity there than easyJet, for whom Orly is only the tenth largest airport.

Almost 30 million passengers at Orly in 2015

Parent group Aéroports de Paris recently reported its traffic figures for Dec-2015, when Orly experienced a -1.7% decline in passenger numbers. This followed a 2.9% fall in Nov-2015. However, for the full year 2015 Orly's passenger numbers grew by 2.8% to 29.7 million.

Orly has consistently accounted for 31% of Aéroports de Paris traffic over the past decade, although this fell a little (to 30%) in the global financial crisis, which hit Orly's passenger numbers harder than those of the larger Paris CDG. Orly's traffic dropped by 5% between the pre-crisis peak in 2007 and 2009, while CDG's traffic declined by only 3% over this period.

LCCs have a combined share of 27% at Orly, led by number two airline easyJet (11% of seats), based on data from OAG for the week of 18-Jan-2016. Orly is easyJet's tenth biggest airport by seat numbers (CDG is its seventh). Air France-KLM's own LCC subsidiary brand Transavia has just under 7% of seats at Orly (consisting mainly of Transavia France, but with a small contribution also from the Dutch Transavia). IAG's Vueling has a share of just over 6%, making Orly the biggest point of overlap between the LCC subsidiaries of IAG and Air France-KLM. 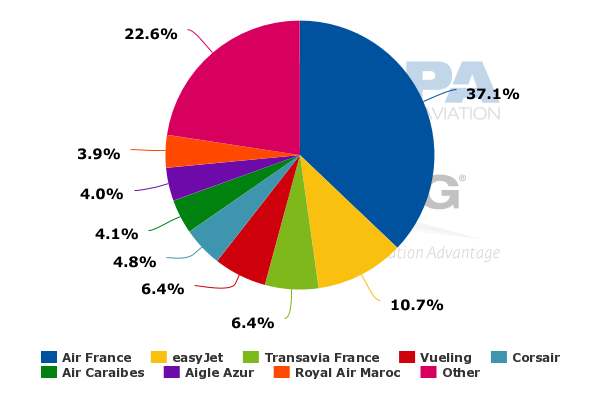 Low cost operators have a higher share in the summer, reflecting what are typically more seasonally variable schedules. OAG data indicate that LCCs will control 35% of seats in the week of 20-Jun-2016. Given also that the LCCs typically have higher load factors than FSCs, their full year share of passenger numbers is likely to be a few points higher than the seat shares shown in the pie chart above.

There has also been an increasing trend of LCC penetration over time, with Vueling particularly gaining market share in recent years. According to data from ADP's annual reports, LCCs accounted for 23.2% of Orly's passenger numbers in 2010 (including easyJet 9.6% and Vueling 4.9%), and 31.1% in 2014 (easyJet 10.7% and Vueling 8.1%).

The airport's network is dominated by short/medium haul traffic, which accounts for around 85% of total seats at Orly (week of 18-Jan-2016, source: OAG). Flights of less than two hours account for 65% of seats, and flights lasting less than four hours represent 85% of seats.

Orly has a much higher proportion of domestic traffic than its larger sibling Paris CDG. According to data from OAG for the week of 18-Jan-2016, 40% of seats at Orly are in the domestic market, compared with 9% at CDG. In addition to the domestic market, short/medium haul routes also account for around three quarters of international seats. 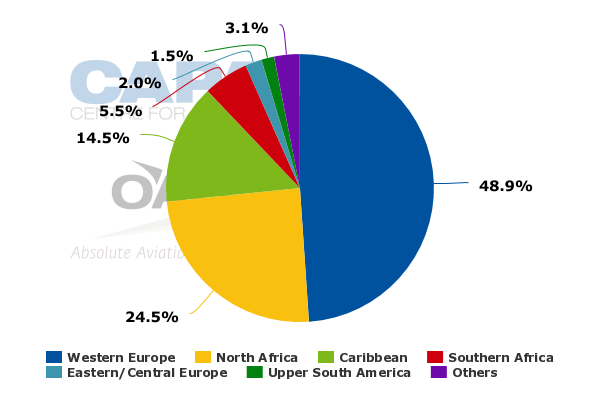 Top five country destinations from Orly are all Mediterranean

The importance of leisure destinations in Mediterranean countries is reflected in the distribution of seats by country from Orly. Spain is the biggest destination, with 15% of international seats, followed by a quartet of nations that all have a similar share of 9% to 11%: Italy, Algeria, Morocco and Portugal.

Among Europe's four largest nations outside France, the UK and Germany are not as well served from Orly as Spain and Italy are, mainly because the two Northern European nations generate less leisure traffic from the airport. 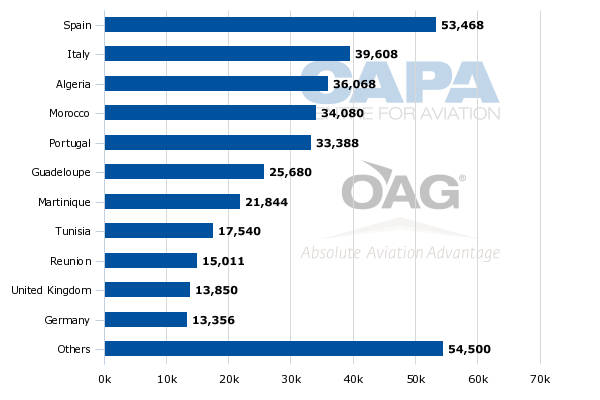 Paris Orly is unusual among European airports in that it is a major base not only for a national legacy airline (Orly is Air France's second biggest airport after CDG), but also for the LCC subsidiary of that airline's parent group (Orly is also the second largest base for Transavia, after Amsterdam).

Air France and Transavia do not duplicate any routes at Orly, but there are 11 Air France destinations from CDG that Transavia serves from Orly (see table below). This is almost half of the 23 destinations served by Transavia from Orly, accounting for 54% of its seats (based on OAG data for week commencing 18-Jan-2016).

These destinations include Munich, which will become the Transavia brand's first base outside France and the Netherlands in Mar-2016.

This degree of overlap between Transavia and Air France is the result of a 2014 agreement reached between Air France management and its pilots, after a dispute over the LCC's development that led to a series of strikes.

Under the terms of the deal, Transavia France may not take over any domestic Paris routes from Air France. It may not operate at all from CDG and its development must not harm Air France's medium haul activity at CDG. Transavia France's maximum distance for routes from Paris Orly or any French airport will be 2,500 nautical miles (roughly 4,600km) and it may not operate long haul routes.

The composition of the list of airports served by Air France from CDG that Transavia serves from Orly has changed over time, but the overlapping destinations must be those that were agreed with the Air France pilots in 2014. Moreover, Transavia may only operate from Orly to Air France's CDG destinations on the agreed list if there is no structural reduction in frequencies for Air France.

In effect, Air France management is prevented from transferring capacity to Transavia. By comparison with its main LCC competitors at Orly, Transavia's freedom to develop its network is constrained. Air France is increasingly struggling with a high cost base, and would benefit from greater flexibility to grow the low cost Transavia more aggressively.

Orly is the biggest overlap airport between Transavia and Vueling

Orly is not one of Europe's largest LCC airports (it ranks number 16 for seats operated by LCCs in the week of 18-Jan-2016). Nevertheless, it is notable for being an intersection between two LCC subsidiaries of the Big Three European legacy airline groups and one of Europe's Big Two LCCs.

As noted above, Orly is the biggest airport of overlap between the LCC subsidiaries of Air France-KLM and IAG, measured by the number of seats that each of Transavia and Vueling deploys there. It is the second biggest base by seats for Transavia, behind Amsterdam (treating both the French and Dutch operations as one), and the third biggest for Vueling, behind Barcelona and Rome Fiumicino.

Based on data from OAG for the week of 18-Jan-2016, Transavia operates 23 routes from Orly and Vueling operates 17, but the two airlines only overlap directly on only three routes: to Lisbon, Porto and Barcelona (Vueling's biggest route from Orly; it also serves Barcelona from Paris CDG). In addition, they overlap on a city pair basis on two other Transavia routes from Orly, namely to Madrid and Seville, which Vueling serves from CDG.

easyJet is bigger than both at Orly

Both Transavia and Vueling also compete at Orly with easyJet, which has almost as many seats as both of them combined at the airport, and is the second largest LCC in Europe. Transavia's accelerated development was largely in response to easyJet's erosion of Air France's position at Orly.

EasyJet operates ten routes from the airport, although its overlap with the other two principal LCCs is minimal on an airport pair basis. EasyJet and Transavia both operate Orly to Naples and Venice Marco, while easyJet and Vueling both fly Orly-Rome Fiumicino. Only 11% of easyJet's seats at Orly are on airport pairs also operated by Transavia, and the same figure applies to easyJet's airport pair overlap with Vueling.

Transavia has a lower average number of seats per route (around 1,700) than Vueling (2,200). This is mainly due to its lower average daily frequencies, reflecting its greater leisure focus. EasyJet has a much higher average number of seats per route (6,300) than either of the other two main LCCs at Orly, underlining its greater appeal to business travellers. All three operate only narrow bodies.

Air France's average of around 20,000 seats per route not only reflects the greater emphasis on frequencies in its schedule, but also the inclusion of long haul routes on which widebody aircraft are deployed.

Paris Orly Airport: number of routes and average number of seats per route for the four leading airlines 18-Jan-2016 to 24-Jan-2016

On Orly airport pair routes, Transavia and Vueling overlap with each other more than with easyJet

On a city pair basis, the easyJet overlap is greater in terms of the number of routes. From Paris CDG, easyJet flies to seven destinations served by Transavia from Orly (Agadir, Barcelona, Lisbon, Madrid, Naples, Porto and Venice). EasyJet also operates from CDG to six airports served by Vueling from Orly (Barcelona, Bologna, Catania, Lisbon, Milan Malpensa and Porto). EasyJet and Vueling also both operate from CDG to Barcelona and Madrid, and from Paris to different airports in Milan and Tenerife.

The airport pair overlap between the three principal LCCs operating in Orly, as a percentage of each airline's seats at Orly, is shown in the table below.

On Paris city pairs, the overlap with easyJet is greater

The city pair overlap between the three LCCs, as a percentage of each airline's total seats in Paris Orly and CDG, is shown in the table below.

This high degree of overlap for Vueling largely reflects the importance of Paris-Barcelona, which accounts for 31% of its Paris seats, and is also operated by the other two LCCs.

Four city pair routes are operated by all three LCCs

All three of easyJet, Transavia and Vueling operate from Paris to Barcelona, Madrid, Lisbon and Porto. These routes are all very competitive, with between five and seven competitors on each of them (see table below). In all cases, the other competitors include at least one national legacy airline and Europe's largest LCC Ryanair.

Air France's attempts to shore up its position at Orly by growing Transavia have met with some success. However, the combined Air France/Transavia share of traffic continues to be eroded by Vueling and easyJet.

These two LCCs have traditionally offered product and network features that appeal to business travellers, in addition to fares that appeal to leisure travellers. Transavia's focus on leisure routes, its relatively low frequencies, and its smaller pan-European network give it a narrower appeal relative to Vueling and easyJet.

Moreover, the constraints placed on Air France by the pilots agreement on transferring routes to Transavia have made it difficult, if not impossible, to optimise the network balance between the two Orly operators in the Air France-KLM group, particularly when it comes to defending the group's position on more business-oriented routes. This situation is likely to become more acute as Ryanair increases its appeal to business travellers, albeit that it operates from a relatively small base in Paris Beauvais.

Orly's growth in passenger traffic outpaced that of CDG after the global financial crisis, driven by LCCs. However, the slowing growth at Orly over the past two years indicates that traffic shrinkage by Air France is holding back the number two Paris airport, in spite of continued LCC expansion.