Transavia part 2: still constrained by unions and forced into high degree of overlap with Air France

Air France's recent draft agreement with pilot unions over the future growth of its Transavia France LCC operation puts the Air France-KLM Group in a better place than it was before the deal was struck. This is particularly so in view of the damaging strike that preceded the accord.

However, the deal comes with some major compromises. Instead of adding new Transavia routes across Europe via the now abandoned Transavia Europe, Air France will put all its LCC growth into Transavia France. In our first in this series of two reports analysing Transavia, we concluded that the abandonment of its plans to establish a pan-European LCC vehicle was a high strategic price to pay.

In this second report, we highlight the extent to which Transavia France will still face significant constraints as a result of management concessions to unions. We also question the merit of the high degree of overlap between Transavia France's network and that of Air France.

Transavia France fleet allowed to grow from 12 to 40 aircraft

Excluding seasonal summer wet leases, Transavia France operated with its current upper limit of 14 aircraft in summer 2014. The new deal with the unions, if ratified, allows Transavia France to increase its fleet to 40 aircraft.

The three elements of the brand (Transavia Europe, Transavia France and Transavia Netherlands) would all have had roughly equal fleets in 2017 of 30-something aircraft. This would have meant little or no growth for the Dutch operation, a more than doubling of the French operation and the launch and very rapid growth of the pan-European operation. Air France always required union agreement to expand Transavia France beyond 14 aircraft.

A further union agreement may be needed

The 40 aircraft permitted in the Transavia France fleet under the union deal is a little more than the 30-something previously planned. However, the agreement effectively caps the overall Transavia fleet size at only a little more than 70 aircraft, assuming no significant growth in the Dutch unit.

Air France cannot attempt a new LCC operation on top of Transavia, since the agreement prevents it from using any other group company to operate aircraft of more than 100 seats. This seems to set up another union confrontation once the new limit is reached.

The agreement with the unions also enshrines the limited scope of Transavia's operations with respect to their impact on Air France's own medium-haul activity. Under the terms of the deal, Transavia France may not take over any domestic Paris routes from Air France. It may not operate at all from CDG and its development must not harm Air France's medium-haul activity at CDG. Transavia France's maximum distance for routes from Paris Orly or any French airport will be 2,500 nautical miles (roughly 4,600km) and it may not operate long-haul routes.

In effect, the deal confirms Transavia's previous approach in that it will not grow through the transfer of Paris routes from Air France. Rather, its growth will come through adding routes that are new to the Air France-KLM Group and through flying 'wing to wing' with Air France on existing routes. This approach contrasts sharply with that of Lufthansa, which is concertedly transferring all non-hub point to point routes within the European continent to its LCC subsidiary Germanwings.

If Transavia France is to grow its fleet five-fold from 14 to 70 in three years (assuming that a further agreement can be reached with the unions), it will need to add a significant number of routes to its network. Even increasing to 40 aircraft (just less than a three-fold increase) in three years is a challenging target.

Increase in 'wing to wing' routes served by both airlines

Meeting this growth will not be made easier by the restriction on taking routes from Air France. This almost inevitably means that Transavia must fly some routes that Air France also operates.

Transavia currently operates to 12 cities from Paris Orly that Air France serves from Paris CDG. This is almost one third of the 39 destinations served by Transavia France (based on OAG data for week commencing 20-Oct-2014).

In addition to the routes operated by both Air France and Transavia France in summer 2014, the agreement lists 25 further cities served by Air France from CDG that Transavia may serve from Orly starting from summer 2015. On these overlapping city pairs, a condition of Transavia France's activity is that there is no structural reduction in frequencies for Air France. Again, Air France management is prevented from transferring capacity to Transavia.

As is the case for other FSCs in Europe, Air France suffered from a structural fall in revenue per passenger on its medium-haul network as a result of the global financial crisis. This increases the attraction of owning a low-cost, low fare operator such as Transavia, but also serves to question its deployment on the same routes as the mainline brand.

See related report: Germanwings has preserved Lufthansa's market share, but still has too many legacy issues for a LCC

Air France does not report separate financial results from those of its parent group and the peculiarities of the Air France-KLM Group's geographical segment reporting do not permit a calculation of revenue per passenger on the Europe network alone. We can calculate revenue per passenger for the group for Europe, Middle East and Africa as a single region, which is close to representing its short and medium-haul network (only the sub-Saharan African parts of this are not medium-haul). Of course, we cannot further isolate the trend in point to point versus hub routes, but the broad direction of the trend is probably indicative of both.

In the year ending Mar-2010, the depth of the recession, the Air France-KLM Group's scheduled passenger revenue per passenger fell by 11% on this network, from its pre-recession peak of EUR172 a year earlier to EUR154. Although it recovered very slightly the following year, it has since declined further and was EUR151 in the year ending Dec-2013, 12% below its pre-recession peak.

Average trip length has been fairly stable over this period on this network and so the fall in revenue per passenger reflects a fundamental shift in consumer attitudes towards the pricing of medium-haul flights. By contrast, 2013 revenue per passenger on the rest of its network (long-haul) was 14% above its pre-recession level, in spite of also suffering a drop of 11% in the year to Mar-2010.

Transavia's 2013 scheduled passenger revenue per passenger was 30% below that of the rest of the Air France-KLM Group on its medium-haul network (as approximated by Europe, Middle East and Africa), in spite of having a 60% longer average trip length. In terms of scheduled passenger revenue per RPK, Transavia's yield is 56% below that of the group's medium-haul network.

Transavia is much better positioned to attract the price sensitive consumer that is central to the point to point leisure segment and Air France-KLM's rapid expansion of Transavia France is welcome in this context. Moreover, although it is loss-making, Transavia is a genuine low-cost operator, based on its CASK versus other European airlines.

However, Transavia is restricted from realising its full potential, in spite of its French unit being allowed to expand beyond 14 aircraft. As we highlighted in part one of our report on the new union agreement, Air France-KLM has been forced to abandon its plans for Transavia Europe and the consequent benefits that would have resulted from moving its LCC onto a pan-European scale. Our first report also described how the unions will have influence over any future changes to the Transavia France pilots' labour contract.

In addition, as detailed in this report, the union deal prevents the transfer of Paris routes from Air France to Transavia and prevents the application of the Air France code on Transavia France flights. This has resulted in the peculiar situation of the two airlines operating wing to wing on a number of common routes, as described above.

The number of overlapping routes looks set to increase around three-fold, roughly in line with the growth in Transavia France's fleet from 14 to 40 aircraft. Assuming that it adds other routes at a similar rate, this will maintain the proportion of Transavia France's routes that overlap with Air France at around one third, a significant level.

The group is loss-making on its medium-haul point to point network and most of the losses are due to Air France operations (although Transavia is also in the red). The logic of operating the two brands effectively in competition with one another is difficult to comprehend. Some might call it market segmentation, but it looks more like cannibalisation of sales and cannot help either operator to improve its profitability.

At its investor day in Sep-2014, Air France-KLM presented a slide entitled "Transavia development to ensure effective segmentation of short/medium-haul offer". This described Transavia's segment as being leisure/price driven, while that of Air France was described as business/network driven. This spells out very clearly that the two have a different proposition. 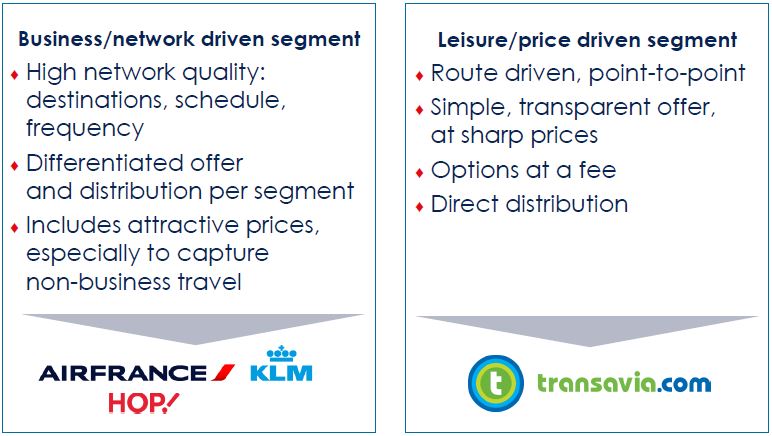 Operating Air France on a leisure/price driven route is likely to see it undercut by Transavia, but perhaps still diluting the latter's load factor. Operating Transavia on a business/network driven route may be more successful as even business travellers are more price sensitive on short/medium-haul than they were in the past, although they also look for frequencies and the presence of both brands on the same route would limit the frequencies of both.

Fighting a war on two fronts

It seems that the restrictions imposed by the union agreement, which prevent the transfer of routes from Air France to Transavia, have left management with the view that it is better to operate Transavia wherever it can, even if this means competing with its senior group company.

The only way in which it makes sense is in the longer term context of management's war of attrition with the pilot unions for the right to manage the business so that it can fight the bigger war with low-cost competitors.

If Air France continues to struggle for profits on the medium-haul point to point network, it will need further restructuring at some point and management may then argue for the closure of certain parts of its network. This could then result in Transavia being the group's sole operator on those routes that had also previously been operated by Air France, but this would still require union agreement.

Arriving at a future where the Air France-KLM Group has complete freedom to deploy the right operator in each segment, with a cost base suited to providing fares commensurate with market demand, is still a distant prospect. Air France-KLM is better off after coming to this new agreement with the pilot unions than it was beforehand, but its struggle against Europe's major LCCs on its medium-haul network looks like it will continue to intensify.