No hamburgers or frankfurters, but Ryanair will be serving Germany more

Germany is Europe’s number two aviation market (after the UK) by seats. However, although Ryanair is Germany’s third largest carrier, its share of seats there is only about 6%. It has a 14% share of capacity across all its markets and a significantly higher share in other major countries such as Italy, Spain and the UK. This under-representation in Germany may be about to change.

Although high charges at the main hubs and a well-organised main competitor have hindered Ryanair’s growth in Germany, it has shown at bases such as Duesseldorf Weeze and Frankfurt Hahn that it can build a dominant position.

Now, just as that competitor is focusing inwardly on its own restructuring, Ryanair is opening 47 routes from Germany in 2013, including three new airports. Looking further ahead, it has declared that it is in talks with 20 German airports with a view to adding five or six to its route network. We assess Ryanair’s current position and prospects in Germany, including consideration of which airports might attract it.

Ryanair is the number three airline in Germany, measured by total system seats for the week commencing 29-Apr-2013, behind Lufthansa and airberlin, with a share of about 6%. As Ryanair does not compete in long-haul markets, it may be more meaningful to look at its share of seats between Europe and Germany, which is about 7%.

Ryanair is not present in the German domestic market and its share of international seats between Europe and Germany is about 8%. Whichever way we look at it, Ryanair is the biggest foreign carrier and the biggest low-cost carrier in Germany.

But it is weaker in Germany than elsewhere in Europe

Total number of airline seats in European countries where Ryanair is present: 29-Apr-2013 to 5-May-2013

As a result, Ryanair’s roughly 6% share of seats in Germany is significantly lower than its share in other major European countries such as Spain and Italy, where its share is about 22% in both countries, and the UK, where it has about 16%. Its average share of seats across all its markets is about 14%.

High airport charges have kept it out of the primary hubs in Germany, such as Frankfurt and Munich. Ryanair has also faced better organised and more decentralised opposition from the main incumbent, Lufthansa and its subsidiaries, than in Spain, Italy or the UK.

Ryanair is also under-represented in France, but that will have to be the subject of a separate report. It is also interesting to note Ryanair’s strong share of about 32% in Poland, which is one of Europe’s most populous nations, but not yet one of its biggest aviation markets. Ryanair’s presence there should assure it of healthy growth as Poland catches up with Western Europe’s rates of propensity to travel by air over time.

German airports do not feature in any of Ryanair’s top 10 routes or hubs. Germany is also the only one of the major Western European countries where Ryanair has no domestic routes. 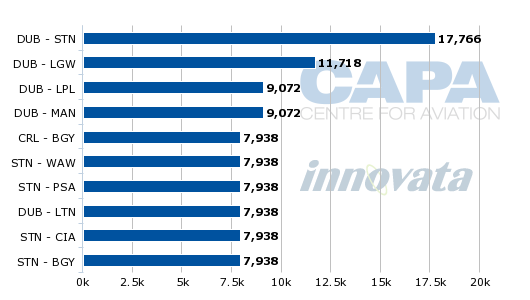 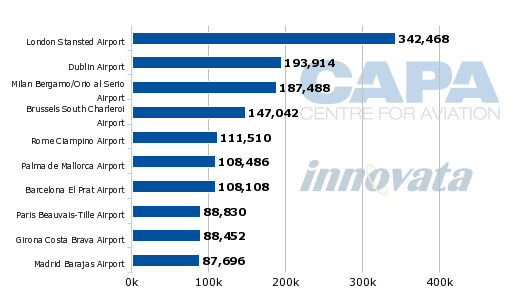 Ryanair operates from 13 airports in Germany

Ryanair has four bases in Germany – meaning that it bases aircraft and crew there – and also operates to nine other destinations. It has a strong market share at its four bases and also at Memmingen and Hamburg Luebeck.

Ryanair’s two most important airports by number of seats (week of 29-Apr-2013) are Duesseldorf Weeze and Frankfurt Hahn, where it accounts for virtually all passenger traffic. It has been operating to Frankfurt Hahn Airport for the past 14 years, since launching operations to the airport on 22-Apr-1999. Since then, it has handled nearly 34 million passengers at the airport, with over two million in 2012. The carrier’s website offers 54 international routes from the airport in summer 2013.

Ryanair recently celebrated its 10th anniversary of operations at Duesseldorf Weeze and now has nine aircraft based there. It launched with a service from London Stansted on 1-May-2003 and now offers 58 destinations from the airport, according to its website.

Ryanair likes to dominate the markets in which it operates and exerts a strong influence over its airports. Of its 13 German airports, it is the number one player in seven and top three in 11. Its weakest market share at an airport where it is nevertheless number one is the 40% it has at Bremen. Here Lufthansa and Germanwings have a combined share of almost 36%, close to Ryanair’s share, and it will be interesting to see how the new Germanwings competes as it assumes Lufthansa routes.

Ryanair CEO Michael O’Leary has predicted that Lufthansa’s low-cost division Germanwings was “doomed to fail”, calling it “absolute rubbish” and stating that it is not an LCC given the price of fares (AustrianAviation.net, 13-Apr-2013). He also noted previous examples of failures in the European market of so-called low-cost subsidiaries of network carriers, saying they are generally too expensive compared to ‘true’ LCCs. He said Germanwings would likely be a “so-called budget airline with the famous Lufthansa high-cost structure”.

See related report: Germanwings rebrands: you say you want a revolution? To be led by cost and operations

Ryanair’s only German airports where it is outside the top three are Cologne Bonn and Leipzig Halle. At Cologne Bonn, which is dominated by Lufthansa/Germanwings, Ryanair is fourth with only about a 4% share of seats, but its focus there is on only five southern sun destinations in Spain and Portugal, where Ryanair’s low fares are likely to be a key consumer purchase criterion. Germanwings operates to a far higher number of destinations across Europe.

At Leipzig Halle, Ryanair is fifth, with a share of about 13% and only six routes, again mainly leisure-focused (Faro, Malaga, Pisa, Rome, Trapani and London Stansted).

Dortmund, where Ryanair is third with about a 13% share, has become the main LCC airport in Germany, with Wizz Air, Germanwings, easyJet and Vueling also present. Ryanair offers only seven routes there.

Mr O’Leary has said the carrier will expand in Germany (Frankfurter Allgemeine Zeitung, 24-Apr-2013). Ryanair is launching 47 new routes from German airports over the course of 2013. These will include 10 new routes from its largest base, Duesseldorf Weeze, and 15 from airports that are new to Ryanair this year (seven from Dortmund, six from Nuremberg and two from Muenster).

Ryanair says it has seen record bookings from its two new connections from Muenster to Barcelona and Malaga in summer 2013. The carrier said it expects to handle around 80,000 annual passengers from the airport. Most of the new routes that have been announced are summer launches, but Ryanair will also start two new German routes for the winter 2013-2014 schedule (to Tenerife South from Cologne Bonn and Memmingen).

These 47 new routes represent around one third of all new air routes in Germany in 2013 and bring Ryanair’s total number of routes offered to/from Germany to 216, an increase of 24% from last year. This is much faster growth than the roughly 3% passenger growth the company expects for the financial year to Mar-2014. This suggests that Ryanair’s relatively low share in Germany should move upwards.

Ryanair new routes from Germany in 2013

'We want to service five or six more airports in Germany'

Turning his thoughts to further expansion, Mr O’Leary told the Frankfurter Allgemeine Zeitung (24-Apr-2013): “We want to service five or six more airports in Germany” and that Ryanair was in talks with some 20 German airports at present. He expects LCCs will continue to gain market share from full service carriers.

On full service operators in the intra-European market, he said: “They’ll have no choice but to scale back in the next three to four years because we will expand and take over markets.” He labelled Germany’s Berlin Brandenburg International Airport “a disaster” and said Ryanair would likely not fly to the German capital anymore in future, citing high airport charges.

At which German airports might we expect to see Ryanair operate in future? The table below lists the top 30 airports in Germany by seats for the week of 29-Apr-2013. With 17 of them not currently having the pleasure of hosting Ryanair, the opportunities for the Irish carrier are apparent.

That said, it is unlikely that Ryanair will move into any of the top six airports in Germany – they are either too expensive and/or Ryanair already operates to alternative airports. Germany remains a market where the ‘classic’ Ryanair approach remains alive and well – move into and dominate the secondary and tertiary airports, while giving primary airports a wide berth. 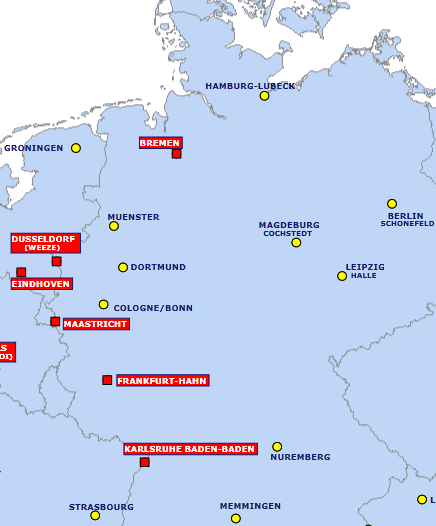 Geographically, Ryanair is fairly absent from large parts of central Germany. Looking down the list of airports in the table below, and excluding the top six, the first airport where Ryanair is not present is Hannover. This is situated in central northern Germany and, apart from Bremen, it is not very close to any other Ryanair airport.

Paderborn/Lippstadt is possibly too close to both Muenster and Dortmund, but Kassel Calden, just a little further east, is nicely located between Ryanair’s airports in the west and Leipzig Halle in the east. Erfut, in central Germany, looks to be similarly well placed between existing Ryanair destinations and Dresden could be a suitable station in the far east of Germany, especially if Ryanair’s interest in Berlin is cooling.

Saarbrucken and Saarbruecken Zweibruecken may both be too close to Frankfurt Hahn and Karlsruhe Baden-Baden, while Friedrichshafen, although quite near to Memmingen, could be of interest to Ryanair due to its proximity to the border with Switzerland, which Ryanair does not serve.

Westerland Sylt, in the far north and near the Danish border, is evenly spaced between Ryanair’s destinations of Luebeck and Billund in Denmark. Currently a purely domestic airport and served mainly by regional aircraft, but also with a Boeing 737-800 service from airberlin, it would be capable of taking Ryanair’s Boeings. Heringsdorf may be too close to Luebeck, but Rostock Laage could be a useful addition for Ryanair in the northeast of Germany.

Brunswick Airport (Braunschweig in German) is not in the list below as it is not currently open to scheduled traffic and has not made public any plans to do so. However, it is reported now to have a 2,300m runway and is located in central northern Germany between Ryanair’s existing destinations of Magdeburg and Bremen. If it were to be interested in commercial aviation, it is just the kind of airport where Ryanair could enjoy a first mover advantage and no competition (and there are likely to be others like it).

Cost will be the main factor for Ryanair

Based on the above thoughts, Hannover, Kassel Calden, Erfut, Dresden, Friedrichshafen, Westerland Sylt, Rostock Laage and Brunswick could all feature on Ryanair’s list of possible new airports in Germany. However, while such geographical considerations may come into Ryanair’s thinking, it is most likely that decisions about new airport for its network will be based on the factor that drives every one of its decisions: cost.

If an airport can make Ryanair an attractive offer that will keep its cost base lower than any other airline in Europe, then Ryanair will be interested. This could include airports that are not currently serviced by commercial traffic. With passenger growth planned in the low single digits this year and aircraft deliveries on hold until the new Boeing order kicks in, leading to likely competition for its business, Ryanair is in a strong position to choose where to go.