airberlin makes no apologies for Etihad alliance after joining oneworld

airberlin this week proclaimed it would “take off for a shared future” with oneworld, but the carrier’s medium-term future is not with the global alliance but rather its new strategic partner Etihad Airways.

In the driver’s seat is airberlin CEO Hartmut Mehdorn, who after the carrier’s joining event in Berlin this week gave a frank assessment of the situation. “Of course,” Mr Mehdorn said of British Airways preferring to receive airberlin’s feed instead of Etihad. But conversely, few oneworld carriers serve airberlin’s namesake hub. “And we would prefer a flight to Berlin. It’s a give and it’s a take.”

airberlin can extract from oneworld only as much as member airlines fly to Berlin, which the majority do not do. The Berlin Government is working to incentivise companies to make Germany’s largest and capital city their home. From there more flights can flow, but this ambition has a long lead time. It is not irrelevant to ask if airberlin, knowing an Etihad alliance would eventuate, would have proceeded with oneworld membership.

See related article: airberlin joins oneworld alliance, but its full potential will not be immediately realised

In Etihad, Mr Mehdorn has found a carrier that not only values his offering – airberlin is the seventh largest European carrier by seats and has unfettered access to Berlin, which Etihad and Emirates are blocked from serving – but can offer sizeable returns: corporate traffic and joint marketing for routes that otherwise had dim margins. British Airways and Iberia, part of International Airlines Group (IAG), could offer those advantages but in only smaller quantities. Without Etihad’s 29.21% stake in airberlin, the German carrier would likely not have had a better proposition than from IAG.

But IAG CEO Willie Walsh said he saw no contention between airberlin’s relationships with oneworld and Etihad. “I don’t think the shareholder makes any difference whatsoever,” Mr Walsh said. He was being diplomatic. airberlin’s strategy indicates another outcome.

Following the Dec-2011 deal, airberlin announced it would switch its United Arab Emirates service from Dubai to Etihad’s hub at Abu Dhabi and increase service from four weekly to 14 weekly flights. More recently, airberlin and Etihad have announced the German carrier will use Etihad’s pilot training for its forthcoming Boeing 787 fleet and that the two carriers would combine their 787 orders to leverage synergies but also have standardisation. Before the 787s arrive, airberlin later this year will retrofit its A330 fleet to have the same business class as Etihad, creating product alignment.

The strategy is intentional. “We’re not just collecting brands,” Etihad CEO James Hogan told Bloomberg about a similar stake he made in Air Seychelles. “It’s got to be something which is the right fit, brings in incremental revenue and, through restructuring, allows us to take out cost and achieve scale. What we won’t do is just put money in and say ‘see you later,’ which other airlines have done.” 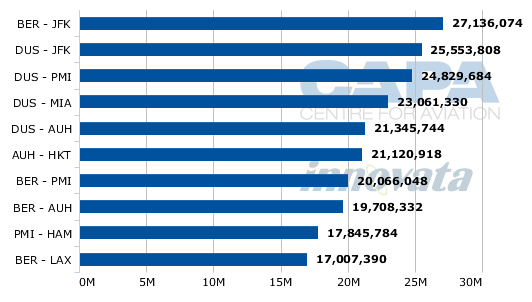 Etihad’s stake in airberlin is still young. It will expand, and as it does so, it has the potential to create more conflict between airberlin and oneworld carriers. Germany’s travel market is the largest in Europe and has much outbound leisure traffic. airberlin has been able to rival key parts of the network of chief competitor Lufthansa by serving Thailand and codesharing on Etihad to India. The Lufthansa Group has the largest presence in India of Europe’s big three airline groups, including Air France-KLM and IAG. Next are likely codeshares on Etihad to other popular German spots, Australia and South Africa. The former will especially compete with Qantas and the latter with IAG.

Qantas serves Frankfurt but not Berlin. In fact, Frankfurt is one of the few points in the globe every oneworld member serves, but for the majority is the only German point they serve; Berlin and its gleaming new airport Brandenburg International to open in Jun-2012 are unloved. airberlin has a limited presence at Frankfurt; Frankfurt does not rank in its top 10 ports served. airberlin passengers originating outside of Frankfurt would have to transfer at Frankfurt and then Singapore whereas partnering with Etihad offers a one-stop service. To Johannesburg, the case to preference Eithad over IAG is less clear from a network perspective; transferring at Abu Dhabi compared to London Heathrow adds approximately 500nm of travel. Also a factor is IAG’s position in London, with a high O&D market that commands a premium without the need to rely as heavily on transfer traffic. That could price airberlin/British Airways flights out of the market, giving the traffic to Lufthansa or Air France-KLM; Etihad offers an alternative. 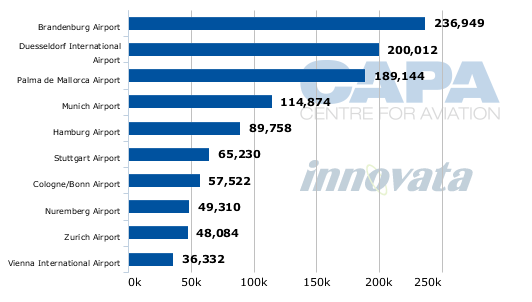 Mr Mehdorn acknowledges airberlin is considering new services, but declines to say where, except that more fifth freedom flights out of Abu Dhabi are on the cards. airberlin this month will start an Abu Dhabi-Phuket service that replaces previous direct flights from Germany. Etihad will codeshare to Phuket, where it previously did not operate, and Mr Hogan has said forward demand is good.

“We are talking with our friends in Abu Dhabi,” Mr Mehdorn said. “Basically we feel the hub in Abu Dhabi and the distribution…is superior. It’s better you share instead of everybody does everything. We don’t have enough airplanes. Buying an airplane is expensive.”

In hindsight, was joining a global alliance the right decision?

“We open up hundreds of destinations around the world, hundreds we would never be able to fly to on our own without buying squadrons of aircraft,” CEO John Borghetti remarked in Aug-2010 when announcing the partnership. “It is a very effective way of maximising your return from a small number of aircraft.”

Virgin had other strategic partnerships, with Air New Zealand and Delta Air Lines, and would go on to forge another with Singapore Airlines. It remains an unaligned carrier and helps propagate the question if a global alliance was the right decision for airberlin.

To be clear, by the time the Etihad partnership was announced in Dec-2011, airberlin was far from being able to walk away from oneworld. But what if its partnership chronology was different and Etihad came before oneworld? With an anchor alliance partnership, can the value of a global alliance exceed the significant time and cost to implement and maintain alliance membership?

Mr Mehdorn offered an explanation of selecting a global alliance. “We do it to please our customers – the lounges, more destinations, the network offering is more attractive for the mileage system. It makes a lot of sense for customers.”

But those benefits and global alliances are not mutually exclusive. Virgin Australia has added lounges, destinations and frequent flyer opportunities with Air New Zealand, Delta, Etihad and Singapore Airlines. Virgin also has been free to ignore alliance alignment to select partners that are geographically strategic: a SkyTeam carrier across the Pacific, Star carriers to Asia and New Zealand, and an unaligned carrier to the Middle East and beyond as well as smaller niche alliances, such as with Hawaiian Airlines, Virgin America and Virgin Atlantic.

airberlin in fact had a relationship with American Airlines prior to joining oneworld, although alliance membership could have been a catalyst to partner. If airberlin chose to remain independent, it would have two significant offerings to potential partners.

First, it would have been one of only two full-service carriers without an alliance allegiance in the top 30 carriers ranked on seats (the other being Emirates). For most airlines looking to expand their reach, especially for an airline with a hub east of Germany or an airline looking to reach the burgeoning Eastern European market airberlin is turning its attention to, airberlin would have been a neutral option.

Second is the maxim that your enemy’s enemy is your friend. airberlin competes with Lufthansa, a reckoning force across the region and even the world. Any airline looking to leverage itself against Lufthansa could call on airberlin. It is not dissimilar to Virgin Australia’s position: Qantas had a dominating position in the Pacific, and four airlines from four regions from three alliance backgrounds – Air New Zealand, Delta, Etihad and Singapore Airlines – found a common cause in uniting with Virgin. The same logic but on a different continent could have seen airberlin team up with partners besides Etihad, giving airberlin network advantages without having to discriminate based about alliances or adding cost from alliance membership.

It is an exercise in thought, but one that could find relevance in new markets, and probably first in Canada (a country with a strikingly similar aviation market as Australia) where WestJet is looking to expand domestically with a regional network as well as long-haul international flying, all in the face of one dominating carrier, Air Canada.

Etihad-airberlin: An exception for oneworld or the way forward?

airberlin is not Etihad’s first oneworld partnership, although it is the first involving equity. Prior to airberlin, Etihad established a codeshare with American Airlines, primarily covering US and European flights to Abu Dhabi, as well as a frequent flyer and codeshare arrangement with member elect Malaysia Airlines. Even before that, Etihad struck a limited deal with Qantas, but that was undone after Etihad partnered with Virgin.

In Europe, Etihad partners with bmi, which IAG is in the process of acquiring, but elsewhere on the continent opportunities may be limited. Air France-KLM has confirmed it is in discussions with Etihad, which if the deal, in complex negotiations, eventuates would close IAG off.

See related article: Air France-KLM to partner with Etihad? - If you can’t beat them, join them

But Mr Walsh does not see dim prospects for Etihad and oneworld. As he said at airberlin’s joining event, “oneworld I believe has a very progressive attitude towards carries right across the world, unlike some of our other competitor alliances. We have established some codesharing links with carriers in the Middle East and I have no doubt that will be an increasing feature of our business as we go forward.”

American Airlines most bullish on service to Berlin

Of the 10 other active members of oneworld, only British Airways, Finnair, Iberia and Royal Jordanian serve Berlin. JAL is embarking on long-haul expansion as its traditional domestic and regional market becomes overtaken by LCCs. The carrier has announced services to Helsinki from Mar-2013 in part to take advantage of Finnair’s geographically convenient Helsinki hub. airberlin’s home hub could offer the same strategy, but any decision on Berlin is unlikely while the economic situation in Europe continues. Cathay Pacific, LAN and oneworld member elect Malaysia Airlines are unlikely to serve Berlin in the near future. Russia’s S7 is closer, but it has been bunkering down due to economic situations.

Most bullish and promising for adding services to Berlin is American Airlines. CEO Tom Horton said his carrier was evaluating service to Berlin, which he said posed great opportunity. While Berlin is rising in popularity in North America, it is a leisure destination and takes second place to Munich, which Americans prefer for the Bavarian atmosphere. American currently offers Frankfurt service from Dallas while airberlin is carving out a US presence, including with services to American’s hubs at Los Angeles, Miami and New York. Any American Airlines service would likely start as seasonal unless European economic or Berlin corporate prospects picked up.

A growing advantage to airberlin’s network is its Eastern European coverage, important not only as the market grows but since oneworld lost scale with the Feb-2012 collapse of Hungary’s Malev. Another is that there are few growth opportunities at London Heathrow, a big oneworld hub, while opportunities at Frankfurt are shrinking. Further oneworld presence in Berlin may be driven as much by opportunity as necessity. And once there is greater oneworld presence in Berlin, airberlin will need to make clearer its preference between oneworld and Etihad, unless of course Etihad has not already brought the carriers into its extensive and growing partnership web.