AirAsia had one of its most challenging quarters in its 13-year history in 2Q2014 as overcapacity and intense competition across Southeast Asia impacted the group’s profitability. While the AirAsia Group’s Malaysian subsidiary remained profitable in 2Q2014, albeit with one of its lowest operating margins in several years, all of the group’s overseas affiliates incurred losses.

The group’s oldest and most established affiliate, Thai AirAsia (TAA), had a rare loss as political instability impacted inbound demand while domestic competition intensified. But TAA should also see an improvement in 2H2014 as Thailand’s tourism sector begins to recover and it starts to get feed from its new long-haul sister carrier, Thai AirAsiaX (TAAX).

The biggest medium and long-term challenges are in Indonesia and the Philippines, where AirAsia has been restructuring networks as part of turnaround initiatives. The group has decided to cut its fleet in the Philippines by eight aircraft while fleet growth at Indonesia AirAsia has been frozen for a second year, which will keep the airline at the 30 aircraft mark for all of 2014 and 2015. This second instalment of a three-part report on the AirAsia Group's 2Q2014 results deals with Thai AirAsia.

This is the second in a three part series of analysis reports on the AirAsia Group’s 2Q2014 earnings and outlook.

The first part (published on 22-Aug-2014) focused on Malaysia AirAsia (MAA), which recorded a 17% drop in operating profits for 2Q2014 to MYR174 million (USD54 million). But MAA should see an improvement in 2H2014 as it stands to benefit from the upcoming restructuring at Malaysia Airlines (MAS).

In a report published on 20-Aug-2014, CAPA also analysed the below-par 2Q2014 financial performance of fast expanding sister airline group AirAsia X. But AirAsia X, which focuses entirely on the medium/long-haul market from Southeast Asia and is a separately listed company, has a relatively bright long-term outlook and also stands to benefit from a MAS restructuring which is likely to involve some downsizing.

This part analyses the results and outlook of Thai AirAsia (TAA) and the third part looks at Indonesia AirAsia (IAA) and Philippines AirAsia (PAA). All three affiliates were unprofitable in 2Q2014. AirAsia Group also launched an affiliate in India in 2Q2014, which was predictably also unprofitable due to start-up costs. AirAsia India (AAI) and the planned 2015 relaunch of AirAsia Japan (JAA) diversifies the short-haul LCC group’s portfolio outside its original home market of ASEAN.

TAA was the first of AirAsia’s joint ventures. It launched in early 2004 and is now the second largest AirAsia-branded carrier, operating 37 aircraft on 45 routes. TAA has been consistently profitable, with annual profits every year since 2010 and 18 consecutive quarterly profits until 2Q2014. The carrier’s parent company Asia Aviation completed a successful IPO in 2012, giving AirAsia a second listing. 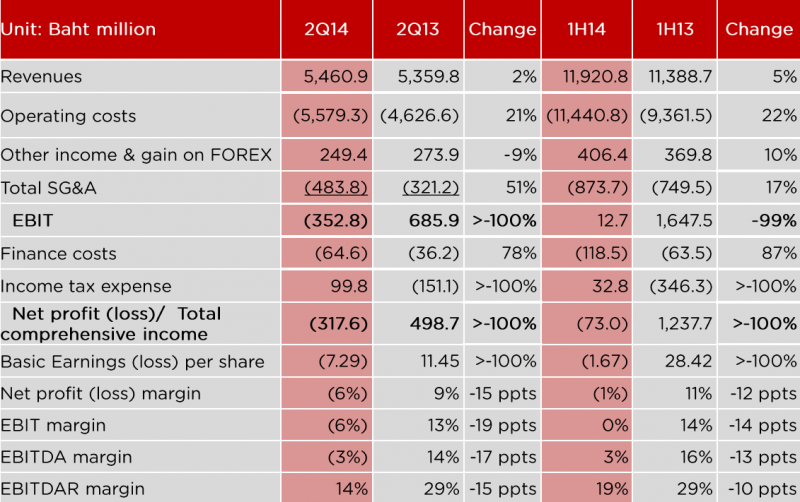 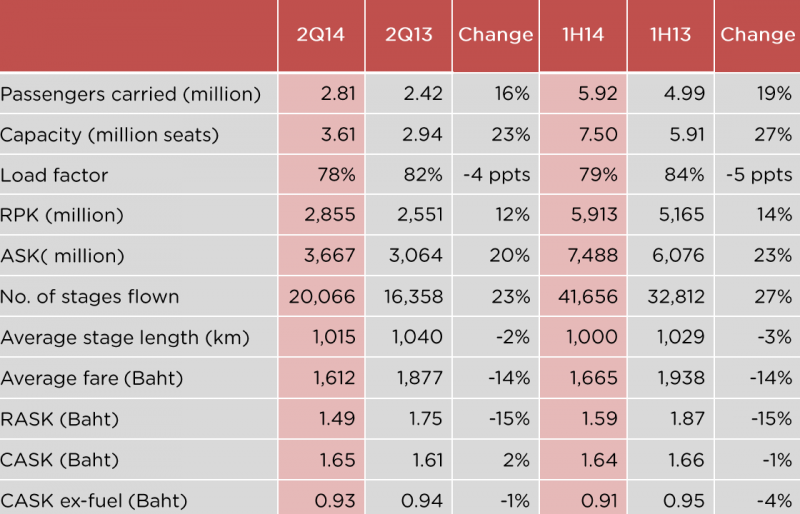 All Thai carriers were unprofitable in 2Q2014 as demand slumped due to political instability followed by the May-2014 military coup. TAA is heavily exposed to the regional international market, which has been most impacted by the civil unrest. Inbound visitor numbers from East Asia were down by 18% in 1H2014 while visitor numbers from other source markets were up slightly or relatively flat.

TAA carried 1.1 million international passengers in 2Q2014 on 26 routes to other East Asian countries (Southeast Asia and Northeast Asia). TAA was still able to grow its international passenger traffic by 10% year over year – an impressive accomplishment given the overall large drop in the Thailand-Southeast Asia and Thailand-North Asia markets. But the passenger growth came at the expense of yields – average fares were down 14% in 2Q2014 while RASK was down by 15%.

Conditions in Thailand’s domestic market have been relatively more favourable. Domestic passenger traffic at Bangkok’s two airports increased by 14% in 2Q2014 while international passenger traffic dropped by 15%, according to Airports of Thailand (AoT) data. But as CAPA previously pointed out in analysing the 2Q2014 results of TAA rival Nok Air, the domestic market has seen a huge increase in capacity that has made it virtually impossible for any Thai carrier to be profitable. Both domestic and international yields were down in 2Q2014.

TAA and Nok are both confident market conditions in Thailand will improve in 2H2014. Both carriers are well positioned as local demand improves but TAA also needs a recovery in visitor numbers given its exposure to the regional international market.

TAA’s new long-haul sister carrier, Thai AirAsia X also needs a recovery in visitor numbers to help sustain its new routes to Korea and Japan. TAA and TAAX are separate companies but connect with each other, following the model used by MAA and AirAsia X in Kuala Lumpur. TAA also introduced in late 2013 a transit product at its Bangkok Don Mueang hub for passengers connecting between two short-haul flights.

So far transit traffic accounts for a very small portion of overall traffic at TAA but there are huge growth opportunities, particularly as TAAX expands. The ability to grow transit traffic and benefit from the anticipated recovery in the local inbound market and continued growth in the outbound market, driven by a higher travel propensity among Thais as discretionary incomes rise, gives TAA a relatively bright outlook.

Intensifying competition is a concern, however. In addition to rapid expansion from Thai Lion another LCC start-up, Thai Vietjet Air, is planning to launch services by the end of 2014. But, as the leading carrier in Thailand’s LCC sector, AirAsia is well positioned to capture a large share of the expected growth. TAA could also potentially benefit from the expected restructuring at Thai Airways, particularly if Thai cuts capacity in the regional international market.

But TAA also faces a potential risk as the new military government, which has placed its generals at the top of Thai Airways, could opt to compete more viciously against TAA. Unfortunately there is still a perception in Thailand of a link between TAA and the previous government although the Thaksin-founded company which originally had a 50% share in TAA sold its stake back in 2007.

AirAsia remains bullish on its long-term prospects in Thailand but the group has wisely slowed down the rate of expansion.

TAA also has adjusted its fleet plan for 2015 from an original additional seven aircraft to five aircraft. The carrier is now slated to end 2015 with 45 aircraft instead of an earlier plan for 50 aircraft.

The slowdown in growth appears sensible given the recent challenges. When also factoring in TAAX, which operates two A330s and plans to add three more in 2015, AirAsia as a brand is still investing heavily in Thailand. TAAX will focus on Korea, Japan and northern China, complementing TAA’s short-haul network and providing the AirAsia brand with a stronger overall presence in the Thailand market.

Despite the political risk and uncertainty, the outlook for AirAsia in Thailand is relatively bright. The group’s position in its other two Southeast Asian markets, Indonesia and the Philippines, is generally weaker.

For Part three of this report please visit:
Indonesia AirAsia, Philippine AirAsia and new India and Japan joint ventures. The next stage begins