Thai Airways is embarking on a restructuring aimed at turning around the ailing carrier after a large loss in 2Q2014. Thai’s performance has been significantly impacted by political instability, which has scared away tourists, but the flag carrier also has large longstanding issues which prior restructurings have not resolved.

Thai’s strategy also desperately needs a refocusing. The group’s decision to move regional subsidiary Thai Smile from Bangkok Suvarnabhumi, where Thai Smile has been feeding Thai Airways, to Bangkok Don Mueang is particularly puzzling. Thai Airways is also planning to launch Dusseldorf at a time the European network needs to be restructured. 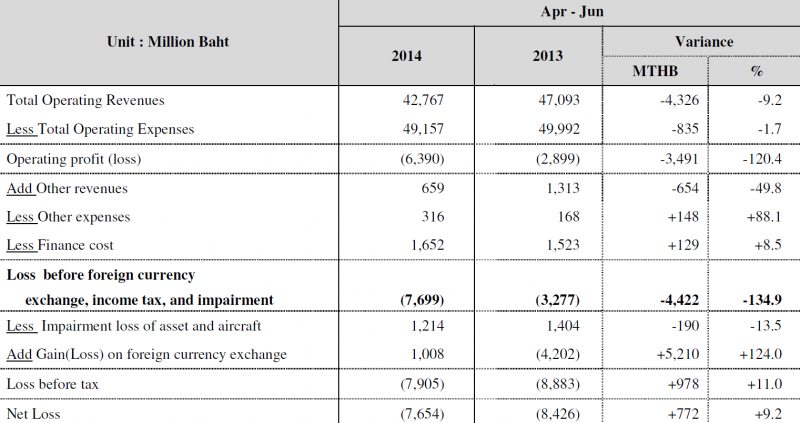 As a result the average passenger load factor at Thai Airways and Thai Smile combined dropped 7ppts in 2Q2014 to only 63.5% while for the six month period the load factor was down by 8.3ppts to 66.9%.

Passenger yield was up by 5% in 2Q2014 (and by 2% in 1H2014) but this was driven by depreciation in Thai baht (as an overwhelming majority of Thai’s revenues are generated overseas) and was not nearly enough to offset the drop in load factor.

Thai Airways has since stated that European routes have shown some signs of improvement while routes to Australia remain under pressure. The airline has not yet released operating figures for Jul-2014.

Thai Airways needs to make adjustments in Australia and Europe

Australia has become a challenging market as a result of a large increase in capacity from Southeast Asian competitors, particularly Malaysian carriers. Visitor numbers from Australia have been relatively steady this year despite the political instability. But Thai Airways has lost market share on the Australia-Thailand route due to intense competition from airlines with one-stop products, including long-haul low-cost carriers AirAsia X and Scoot as well as full-service flag carriers Malaysia Airlines and Singapore Airlines.

Visitor numbers from Europe increased by 6% in 1H2014, indicating that Thai has lost market share to airlines with one-stop products in the Thailand-Europe market, particularly Gulf carriers. Thai currently operates 88 weekly flights to 13 destinations in Europe, which accounts for nearly 40% of the carrier’s ASKs. 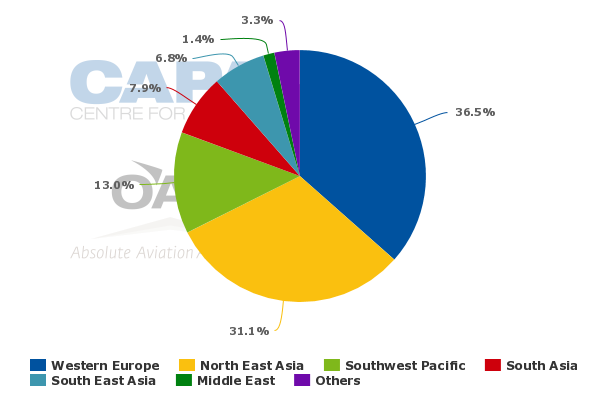 Surprisingly Thai has not yet made significant adjustments to its European operation. Instead Thai is expected to announce within the next few days Dusseldorf in Germany as a new European destination, with four weekly flights beginning by the end of 2014.

Thai Airways would be better off without Dusseldorf start-up costs

Thai Airways is expected to reduce Frankfurt service to make room for the new Dusseldorf service. Thai currently has one daily A380 frequency and one daily A340-600 frequency, with the latter likely to be withdrawn.

With Dusseldorf Thai may be trying to carve out a niche as unlike Frankfurt, where Thai competes with Lufthansa, Dusseldorf is currently not served non-stop by any carrier from Bangkok. Dusseldorf currently only has two non-stop links to Asia, Beijing with Air China and Tokyo with All Nippon Airways, but Etihad, Emirates and Turkish all offer competitive one-stop connections to Bangkok.

The decision to expand the European network despite the recent challenges is not logical as any new long-haul route has significant start-up costs. Thai should be cutting European capacity and its network as part of its restructuring rather than experimenting with new destinations.

Thai’s only other adjustment in its long-haul network so far has been London, which it temporarily plans to reduce from 14 to 12 weekly frequencies from mid-Sep-2014 to late Oct-2014. Thai still uses A340-600 and 747-400s on its London flights as well as to several other European destinations. The A380 is used on Paris and one of the Frankfurt frequencies but this aircraft has generally proven to be too large for Thai’s needs since it entered service in 2012.

Thai Airways' turnaround plan has not yet identified route or capacity cuts; military appointees take over at the top

Thai Airways has not yet detailed any network cuts as part of its restructuring although there are some obvious targets. Johannesburg for example has been highly unprofitable with an average load factor of only 58% in 1H2014.

Los Angeles is also a challenging route as Thai serves it via Seoul, where it faces intense competition against Korean and US carriers. Thai’s load factor has been a more respectable 70% on Los Angeles in 1H2014 but the high cost of the operation makes it a potential target as Thai’s majority shareholder, the Thai government, looks to cut costs.

Thai has so far unveiled plans to cut over one-quarter of its workforce by 2018, starting with 1,500 jobs by the end of 2014. The reduction in head count should help the airline’s overall efficiency although costs could increase in the short term due to severance packages. Thai has said it plans to cut capacity, particularly on long-haul routes as some regional markets within Asia could see increases, but has not yet provided details.

The job cuts are just one component of a major turnaround plan. Thailand’s new military government, which took over in a May-2014 coup, has chosen Thai Airways as the first government owned company to be reformed. A turnaround plan was approved in principle by Thai’s new board on 5-Aug-2014 and is expected to be implemented over the next few months, with several initiatives aimed at boosting revenues while reducing costs as well as improving liquidity.

But whether the military government, which still owns a majority stake in the flag carrier (a minority stake is publicly traded), has the skill to turn around an airline is questionable. The government has appointed its air force chief as the interim president while several longstanding executives have been at least temporarily pushed aside in favour of military appointees. Several board members have also resigned.

Meanwhile competition in the Thailand aviation market continues to intensify, particularly from low-cost carriers. Thai Lion at the end of 2013 became Thailand’s third short-haul LCC while a fourth, Thai VietJet, is aiming to launch by the end of 2014. But new LCC competition on medium-haul routes is where Thai faces the biggest threat.

Thailand’s first long-haul low-cost carrier, Thai AirAsia X, launched services in 2Q2014 and is now competing in the Thailand-South Korea and Thailand-Japan market. These have traditionally been two of Thai Airways’ most lucrative markets and currently account for about 20% of Thai’s seat capacity. NokScoot is also targeting Japan, Korea and China – another leading market for Thai – as the new long-haul low-cost joint venture prepares to launch services in 4Q2014. 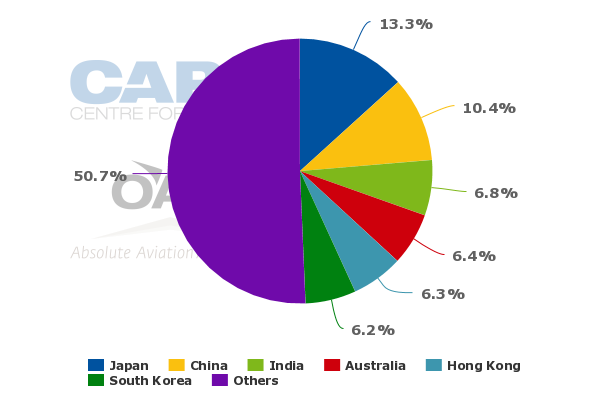 Thai also has continued to lose ground to LCCs in the domestic market, where market conditions have generally been more favourable compared to the international market. Thai mainline domestic RPKs dropped 25% in 1H2014 while Thai Smile domestic RPKs declined by 12%. AoT reported a 13% increase in domestic traffic in 1H2014 across its portfolio of six airports, including a 31% increase among LCCs.

Thai has been more impacted by the political crisis as it is primarily an international carrier (the domestic market accounts for less than 10% of the group’s revenues) and has almost its entire operation at the capital Bangkok, the site of all the civil unrest over the last nine months. Thailand’s beach resorts in the south and tourist destinations in the north, where the LCCs also have bases, have not been impacted.

Thai says the number of tourists arriving at Bangkok’s two airports dropped 23% in 2Q2014 compared to 2Q2013 levels. Tourist arrival figures from regional destinations within Asia were most impacted, dropping by 28%.

Thai Airways’ new leadership team has responded to the intensifying competition from LCCs by moving some of Thai Smile’s operation from Suvarnabhumi to Bangkok’s old airport Don Mueang, which is closer to downtown. AirAsia, Nok and Thai Lion are all based at Don Mueang, where total passenger traffic grew by 24% in 2Q2014 (to 4.8 million) while Suvarnabhumi recorded a 16% drop at (to 10.3 million).

But moving Thai Smile to Don Mueang makes little sense as Thai Smile is a full-service regional carrier and plays an important role feeding Thai Airways, which will continue to be based at Suvarnabhumi.

Over the past two years Thai Smile has allowed Thai Airways to improve the performance on underperforming domestic and regional international routes which are difficult to sustain with widebody aircraft. Thai Airways is in the process of becoming an all-widebody operator while Thai Smile has a fast growing fleet of A320s.

So far Thai Smile has only moved to Don Mueang flights for three domestic destinations – Chiang Mai, Phuket and Khon Kaen. A total of eight daily flights to these three destinations were moved from Suvarnabhumi to Don Mueang on 8-Aug-2014.

Moving to Don Mueang may improve Thai Smile’s competiveness in the local market as the airport is more convenient to most Bangkok residents. But the group has Nok, which serves all of Thai Smile’s domestic routes and is the largest domestic carrier in Thailand, in its portfolio to battle Don Mueang-based Thai AirAsia and Thai Lion.

With the three Thai Smile routes transferred to Don Mueang, Thai Airways has lost some ability to offer domestic connections as it no longer has the same domestic schedule at Suvarnabhumi. Khon Kaen is particularly affected as Thai Airways only operates two daily flights to Khon Kaen. Moving across any of Thai Smile’s other routes (with the exception of Krabi) would be even more detrimental as Thai Airways will completely cut off connectivity in markets which generally need transit traffic to be sustainable.

Thai Airways stated in its 2Q2014 results announcement that it sees signs of the market improving with the economy and tourism sector starting to recover. Initiatives aimed at attracting back tourists are starting to bear fruit, leading to some recovery in inbound figures. But Thai Airways warns rapid capacity expansion, particularly by the LCC sector, will make the competitive situation even more intense.

Thai Airways needs a deep restructuring to return to profitability and build a sustainable business case in the new competitive landscape. Some of the early steps in its restructuring seem promising but other moves could damage rather than help the group’s long-term strategic position.

The problems Thai Airways is facing are similar to those that many other older network airlines are being forced to confront. On short-haul, LCCs are – irreversibly – reshaping local travel behaviour and, on long-haul, the combination of Gulf airline competitiveness and other flag carriers which have reduced costs are creating immense pressures. In addition, within Asia, the arrival of the new long-haul to short-haul low-cost connecting model (eg AirAsia-to-AirAsia X) is further intensifying the paradigm shift.

Fundamental restructuring is essential in these circumstances – and even that is not going to guarantee a return to profitability. The world has changed. Thai has taken some useful steps in assembling lower cost subsidiaries to combat the new enemies; what it needs to do now is to use them effectively and not attempt to wind the clock back.

Thai Airways is at a critical juncture and the decisions made over the next few months will have a huge bearing on its long-term outlook and survivability. Recent changes in senior management raise concerns about the level of understanding of the current environment and their ability to develop a forward looking model. While it may seem a minor point, the splitting of Thai Smile's operations smacks of a lack of understanding of the new market dynamics.

There can be no future in trying to restore Thai Airways to the role it has historically served. There is a future for it, but it must be in a modern form, adapted to make full use of its armoury of subsidiaries and partners. Profitability must be seen as a group target and Thai Smile, Nok and NokScoot all have important and complementary roles to play.