With little fanfare, Etihad Airways has notched China Eastern as codeshare partner number 37. At first glance, benefits may seem limited: Etihad has services to China Eastern's hub at Shanghai but China Eastern's only services to the Middle East are twice-weekly from Kunming to Dubai, close but not at Etihad's hub of Abu Dhabi. Yet the partnership has potential to develop powerfully and be one of the most important to each carrier.

It is a long-term possibility. China Eastern has a number of initiatives and not always enough support to see them through as quickly as Etihad can. Further cooperation will also depend on how markets develop. Unlike bullish China Southern, China Eastern is conservative with its long-haul growth and is not certain on the long-term prospects of Europe. Reducing direct long-haul exposure via a partnership with Etihad, which could also reach other markets, could be ideal. Etihad stands to receive further access to mainland China, which will one day be the largest domestic market and which it cannot serve entirely on its own, due to fleet, demand and bilateral restrictions.

The 28-Aug-2012 formal signing of the codeshare agreement follows a Mar-2012 memorandum of understanding. Initially China Eastern will codeshare on Etihad's daily Abu Dhabi-Shanghai Pudong A330 service and the two from 4Q2012 will offer frequent flyer programme reciprocity.

The Hainan partnership, however, has so far been more limited. Hainan codes on Etihad's three China services – from Beijing, Chengdu and Shanghai – as well as connecting services from Abu Dhabi to Khartoum in Sudan (there are notable Chinese interests and investments in Sudan). The partnership has not yet included domestic codesharing. Any domestic codesharing would be most viable at Beijing, although political sensitivity is high there owing to Beijing being the largest hub for flag carrier Air China. Beijing is Hainan's largest hub in China and Hainan has a minimal presence at Etihad's other destinations of Chengdu and Shanghai. 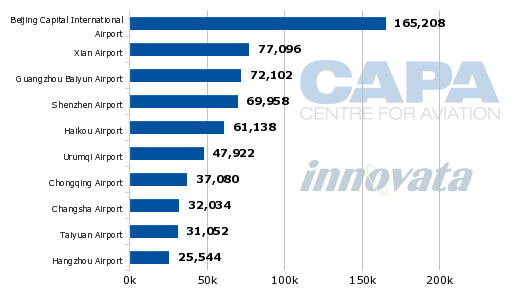 Shanghai Pudong is China Eastern's largest hub by available seats. About half of Pudong's capacity is international whereas capacity at Shanghai Hongqiao is almost entirely domestic. Very limited access at Hongqiao means additional domestic flights are more likely out of Pudong, although that airport too is capacity limited. 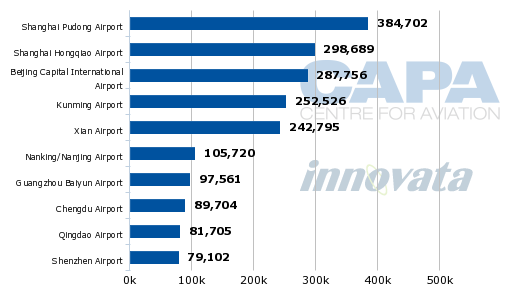 China has the world's second-largest domestic network after the United States, and Airbus expects the Chinese domestic market to overtake the US domestic market within two decades. But long before that, the benefits of access to any domestic network – as Etihad has achieved with airberlin and Virgin Australia – are clear, but in China especially so. China favours a balanced approach to bilateral air service agreements to ensure its young and experience-gaining carriers can be competitive. With UAE carriers greatly outbalancing those from mainland China – they account for only 21% of capacity – organic growth for UAE carriers will be limited.

Medium-term expansion could see codeshares to Saudi Arabia and Africa

China Eastern says it is interested in codesharing on Etihad's services to Saudi Arabia and potentially Africa. Saudi Arabia for many countries is an under-served market, partially a result of conservative growth at national carrier Saudia. While Saudia in May-2012 joined SkyTeam, its sole service to China – and the only route by any carrier between Saudi Arabia and China – is a three times weekly flight from Riyadh to Guangzhou.

China Eastern does not have a base at Guangzhou, and in any event the carrier has been more open to partnerships outside of alliance lines, partaking in a joint venture with Jetstar for a Hong Kong affiliate (Jetstar Hong Kong) as well as codesharing with Hong Kong Airlines. Etihad in Sep-2012 expanded its commercial team in Saudi Arabia, saying the moves reflect the "growing importance of this market for Etihad Airways".

Also fermenting is what role Hainan Airlines may have in Saudi Arabia, which is opening its domestic market to foreign carriers. The Saudi regulator said 14 companies applied and seven were short-listed, including HNA, the owner of Hainan Airlines. (The other six were Qatar Airways, Bahrain Air, Gulf Air, the Islamic Development Bank, Nesma Holding and Falcon Express.) HNA winning the tender in Saudi Arabia could see it open a route to Saudi Arabia to connect with its Saudi operation. Hainan has experience with routes that are not high profile; it operates a twice-weekly Dubai-Luanda service.

Links between Africa and Asia, and China in particular, hold wide potential. That market segment is forecast to see the highest growth rate (albeit from a low base) of services to Asia, even eclipsing the intra-Asia growth rate. Ethiopian Airlines and Kenya Airways are bullishly betting on China with expansion plans.

South African Airways in Feb-2012 launched non-stop services between Johannesburg and Beijing and Air China has raised the possibility of serving South Africa after 2013. Even Air Seychelles, following a strategic investment from Etihad Airways, is looking to use its hub at Mahe as a connecting point for Africa-China flights. Its initial connecting service will be from Johannesburg to Beijing, a market it reckons incumbents are too comfortable in.

The challenge for a Chinese carrier is feed across Africa. Ethiopian and Kenya Airways are strategically positioned and benefit from being able to connect across Africa (Kenya Airways has set a medium-term goal of serving every African capital city). Nigeria in particular is a large market for African passengers bound for China. Etihad's Abu Dhabi hub, with connections to eight African cities, presents a new and more viable opportunity.

Initial flirtations with Etihad's Abu Dhabi hub, and realising the benefits of it, could serve as a gateway for the China Eastern and Etihad partnership to take on greater scope. While China Southern has been aggressive in building a long-haul network so that international seats comprise 30% of available seat kilometres, a ratio it looks to maintain going forward, China Eastern is not bullish. China Eastern does currently have a larger international network than China Southern, but this capacity is mainly short-haul, and especially to north Asia, whereas China Southern's is more long-haul.

China Eastern's long-haul fleet is small with five A340-600s and a small but growing number of A330s. In Oct-2011 it ordered 15 A330s, 12 of which are longer-range -200 variants that can reach Europe. Expansion in Europe for the medium term is pegged around bulking up existing routes rather than opening new destinations. An order for 20 777-300ERs, to be delivered between 2014 and 2018, will replace the five A340-600s and then support ultra-long-haul expansion, primarily to North America. Despite the large number of new widebodies, once replacements and the asset-intensive nature of intercontinental flights from China are considered, growth is modest.

The carrier has a less than upbeat long-term view of Europe, even looking past the current weak economic situation. Supply is seen as too high and yields too low. Extending the Etihad partnership could be tempting. China Eastern is in the SkyTeam alliance, anchored in Europe by Air France-KLM, which itself is in talks with Etihad. But China Eastern is not as close to SkyTeam as China Southern is, for example. Links between the world's emerging markets of Asia and Latin America need to be connected, and while Middle Eastern connections can be longer in distance than alternative points, they can also be more efficient.

A first step, if the mood is right, would be to have China Eastern serve Abu Dhabi and start to receive a greater share of benefits from the Etihad deal. China Eastern could open routes where Etihad is restricted by bilaterals, while Etihad brings non-stop Abu Dhabi-China service to Chinese cities China Eastern might not be able to serve, such as Beijing where Air China is based. Chinese international route planning policy typically permits one Chinese carrier on each foreign route, with exceptions sometime made if Air China wants to fly the route too, or if Air China does not stomach the idea of another carrier operating even if it does not.

Large potential awaits in China Eastern's other hubs, including Chengdu, Kunming and Xian. Chengdu and Kunming in particular could more efficiently funnel passengers around China than the eastern port of Shanghai, connections from which can involve backtracking. Etihad serves Chengdu (in time domestic codeshares could be expanded from there) while China Eastern has a Dubai route from Kunming that could be switched over to Abu Dhabi to tap into Etihad's network.

Western China, including the region around Chengdu, is where much growth in China is and will be occurring at a general and airline level. China Southern is using the far western city of Urumqi as a hub for the Middle East and Russia/CIS, and which could be further expanded as a springboard into China.

The recent alignment or discussion of alignment to Middle East carriers from legacy peers – Air France-KLM, Qantas – reflects a certain "if you can't beat them, join them" strategy, bowing to the power of Gulf hubs and the disruption they have wrought to traditional Asian and European hubs. All of those hubs – including in the Middle East – stand to be potentially disrupted by Chinese carriers, who have scale, low costs and largely geography that permits different hubs for different regions.

While many airlines may be looking to catch up to Middle East counterparts, any closer cooperation between Etihad and China Eastern could be interpreted as Etihad gaining a start on new competition as part of a broader strategy to make friends globally.

Closer cooperation will not go unnoticed

Further cooperation between China Eastern and Etihad seems logical, but strategic alignment between the carriers and a positive reception from the Chinese government awaits, as does China Eastern's outlook on long-haul markets. Closer cooperation will not go unnoticed. Emirates CEO Tim Clark has proclaimed his carrier has a "tailored approach" to partnerships, effectively inferring interest in accessing domestic markets, which it will do with a Qantas partnership and, depending on negotiations, American Airlines.

The importance and robustness in China of the corporate market and frequent flyer programme – the strength of a domestic market and what Emirates sees in American and Qantas – is smaller than in Australia or the United States, but growing. The number of members in China Eastern's programme grew 24% in 1H2012, while revenue growth from the business increased 50% and revenue from elite members increased 29% (base figures not provided). But these are positive improvements for when others see a need to respond and strengthen their position. It is not just Middle Eastern carriers that will seek closer ties but also global alliances – oneworld is painfully aware it does not have a mainland member – and individual carriers, both in and out of alliances, reaffirming the importance of a deep strategy in what will be the world's largest domestic market.