After several years of sagging performance, Saudi Arabia’s aviation market reported its strongest growth in passenger traffic in more than a decade in 2011, even against the background of the Middle East’s regional social unrest. Despite the Arab Spring uprisings in North Africa and some of the Gulf states, Saudi Arabian passenger traffic boomed in 2011, up 13.6% year-on-year in 2011, to just over 54 million passengers, as the national economy expanded 6.8% (real GDP estimate) on expanding oil output and renewed government and private sector investment. Large infrastructure investments are fuelling high movements of migrants workers from around the Gulf as well as India, Southeast Asia and China.

While there have been setbacks, such as the failure of Sama and the virtual abandonment of the domestic market by NAS Air over the past two years, the creeping liberalisation in Saudi Arabia is beginning to produce results. 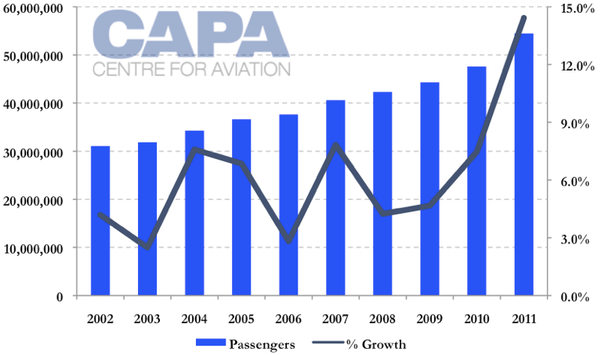 The development is a promising one for the Saudi Arabian aviation market which has been disappointingly slow over the past few years but is now perched on the edge of a major competitive shift designed to increase growth. The Saudi General Authority of Civil Aviation (GACA) is due to award new airline operating licences later this year, after a proposal to open up the local aviation market was passed in 2011. The licences will be available to both Saudi and foreign companies, including Gulf region airlines, several of which have expressed their interest in establishing Saudi Arabian branches.

The impending liberalisation in both the Saudi domestic and international passenger markets is set to give the Saudi aviation industry the greatest competitive shake-up since the end of the Saudi Arabian Airlines (Saudia) monopoly in 2007 and the launch of local LCCs NAS Air and Sama. Combined with this is the privatisation of Saudia, which still has an effective monopoly in the domestic market, and the release of some of the other government shackles on the industry.

International traffic dominated the growth in the Saudi market in 2011, with passenger numbers up 18.2% year-on-year to 29.3 million. Saudi Arabia is the economic powerhouse of the Middle East and also one of the region’s most populous countries. As a result, it has become an increasingly important market for local airlines, as well as for carriers from further afield.

Regional carriers such as Gulf Air, Qatar Airways, Bahrain Air and Etihad Airways all devoted more capacity and attention to the Saudi Arabian market in 2011. Air Arabia CEO Adel Ali said in Jun-2012 that the carrier recognises the potential in the Saudi Arabian market and local authorities have “gone a long way” in developing the country’s aviation market.

The Bahrain-based Gulf Air and Bahrain Air in particular have shifted increasing amounts of capacity into the market. In late 2011, Gulf Air CEO Samar Majali described Saudi Arabia as the carrier’s most important market. Bahrain Air selected Dammam as its second hub in late 2011 and launched services from the city to Beirut and Khartoum in Jun-2012.

Foreign airlines have been granted increasing levels of access to Saudi Arabia’s smaller "domestic" airports. The Kingdom has been busily upgrading and refurbishing its smaller airports over the past few years, as part of a USD50 billion infrastructure investment programme in the aviation and transport sector.

While the majority of international traffic still flies into Madinah, Riyadh, Jeddah and Dammam, smaller cities have attracted new services from a variety of international carriers, such as Turkish Airlines, Ethiopian Airlines, Air Arabia and Flydubai. Passenger numbers at the country’s domestic airports jumped a record 21% in 2011, while flight numbers increased 13.1%. International traffic at the 21 domestic airports jumped 161% in 2011, mostly at Taif, Al-Gassim, Tabuk, Yanbu and Abha.

Foreign carriers handled approximately 62% of passenger traffic to/from Saudi Arabia in 2011, up from 58% in 2010 and 55% in 2009. Increasingly, Gulf regional carriers, both full service and LCCs, are offering a high frequency of connections into Saudi airports. Domestically, Saudia handles 94% of passengers while NAS Air handles 6%. 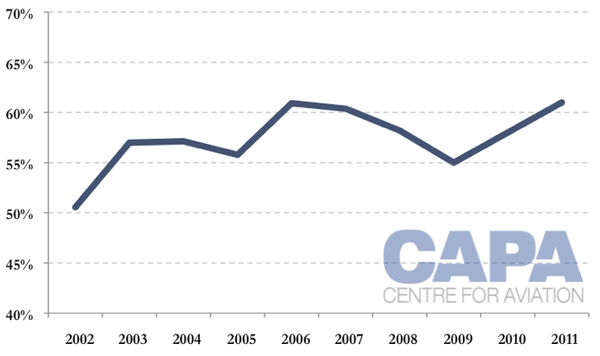 Domestic traffic increased 9.8% year-on-year, to 24.8 million passengers, pushing domestic traffic back to pre-global financial crisis levels. Despite the improving numbers, the local market cannot be properly described as healthy. Demand exceeds supply in the market while punctuality and the state of smaller airports in the country is still lacking.

Just two airlines, Saudi Arabian Airlines (Saudia) and NAS Air, operate domestic services, following the failure of Sama in 2010. For 2011, Saudia controlled 94% of domestic traffic, up from 92% in 2010. NAS Air holds the remaining 6%, but it has abandoned all but the thickest of domestic routes, in favour of higher yielding international services.

NAS Air faces an unappetising competitive situation in Saudi Arabia. Despite the carrier’s young and fuel efficient fleet and comparatively low operating costs, the combination of the state-mandated fare cap and the heavy fuel subsidy granted to Saudia makes thinner regional routes unviable for the airline; these problems saw Sama collapse. As a result, NAS Air has increasingly shifted away from domestic routes outside the big four cities of Jeddah, Riyadh, Dammam and Medinah. There are some exceptions to this, such as services to some larger regional cities like Abha and Gizan, but domestic operations are still primarily limited to Embraer regional jets instead of its larger A320 family aircraft.

The growth in the market has been good for local carriers. While state-owned Saudia does not report financial results, its traffic expanded more than 25% in 1Q2012 and its full year traffic is expected to grow by at least 20%. The carrier’s privatisation process continues to roll along, if slowly. Its catering unit recently completed its USD350 million IPO and plans to privatise the five other units, including Saudi Arabian Cargo and the mainline Saudia passenger business, are underway.

Saudia is mid-way through its re-fleeting programme, having phased out most of its older Boeing 747s and Boeing MD-80 family aircraft. The carrier is due to take delivery of another 15 more 777s, six A320/321s and four A330s in the next two years, and has eight 787s on order.

In May-2012, Saudia became the 16th member of SkyTeam and the alliance’s first member in the Middle East. Saudia expects SkyTeam membership to boost traffic and yields by increasing its attractiveness to foreign travellers and business passengers and through reciprocal codeshare relationships with its new alliance partners.

After years of losses, NAS Air may be finally turning a corner towards profitability. The carrier reported a net loss in 2011 but enjoyed a solid 1Q2012 and was profitable “from an operational perspective” according to new CEO Francois Bouteiller. The carrier reported its second consecutive month of net profit for the first time in Jul-2012. Its net result for Jun-2012 was USD3.8 million, followed by a USD10.9 million profit in Jul-2012.

Despite the prospect of greater competition, NAS Air has a positive outlook. Oil prices, although still a concern, have become “less challenging” according to the carrier. The Saudi Arabia's Supreme Economic Council is reportedly considering an upwards revision to the domestic fare cap, which may entice the carrier back to some domestic routes. Early this year, the Saudi GACA submitted a study reportedly showing domestic air fares are approximately 50% lower than in other Arab states.

As the largest domestic market in the Gulf region but with only two local carriers, there exists significant potential for development in the Saudi Arabian market. Saudi aviation authorities have recognised that the dominance of Saudia in the home market is neither good for the local aviation market or passengers, even with the fare cap in place. As a result, in 2011 the country made the decision to open up domestic operations to foreign operators, an almost unparalleled shift towards liberalisation in a market that until just a few years ago was controlled by a Saudia monopoly.

Saudi Arabia GACA confirmed in Jul-2012 that it received 14 applications to offer domestic services in Saudi Arabia, which it has reduced to a shortlist of seven companies, including Qatar Airways, Bahrain Air, Gulf Air, China's HNA Group, the Islamic Development Bank, Nesma Holding and Falcon Express. The GACA has not revealed how many licences it plans to award for domestic and international operations, but carriers will be able to choose any Saudi airport as a hub and will have free rein on which domestic destinations they serve. The GACA will also reportedly make fuel subsidies available to successful bidders, ensuring that they can compete with Saudia.

With Saudi Arabia investing more than USD20 billion in its aviation infrastructure by 2020, its airline industry needs to match its ambitions. Opening the local market will increase capacity and competition, providing more options for Saudi Arabian passengers, as long as it is done on a level footing. Opening the market will be hard on the local carriers, although both are in better health than they were just a few years ago. The test for Saudi Arabia’s two carriers will be whether they can repeat their recent success in a tighter competitive environment.