Saudi Arabia to take the plunge and open domestic market

Saudi Arabia’s newly independent General Authority of Civil Aviation (GACA) has confirmed that it will go ahead with a radical move to open its domestic skies to foreign carriers as its seeks to breathe new life into the country’s moribund domestic air travel market and increase the Kingdom’s air transport links with the rest of the world.

In a 25-Dec-2011 statement, the GACA announced it would seek applications from both Saudi and foreign airline companies, as well as foreign investors, for licences to operate domestic and international flights from Saudi airports. The GACA hopes to launch the tender process in late Jan-2012, the end of the Islamic calendar year.

The GACA stated that it will not force foreign carriers to operate from specific airports and will provide “multiple options, including free selection of domestic routes”. According to media reports, “licensed airline companies” will be able to operate international flights within the limits of existing Saudi bilateral agreements. It is unclear what the legal and ownership arrangements for international operations will be and whether foreign registered carriers will be permitted to operate internationally. It is also not clear if carriers will continue to be required to serve rural routes without a subsidy.

GACA stated that it would provide airline companies that win the licences with all the necessary facilities to operate domestic and international flights successfully.

With a population of 27.5 million spread across a large country, Saudi Arabia has one of the largest domestic travel markets in the Middle East. However, just two airlines – Saudi Arabian Airlines and nasair – operate on domestic routes. The GACA believes the two airlines are not sufficient to meet the demand for domestic and international travel.

There are four major international airports in Saudi Arabia, as well as 23 smaller domestic airports, some of which also serve international traffic. Domestic traffic at Saudi airports increased 2.3% over 2010, to 22.6 million passengers, but passenger numbers are still below those seen in 2007 and growth has been almost flat for the last three years. 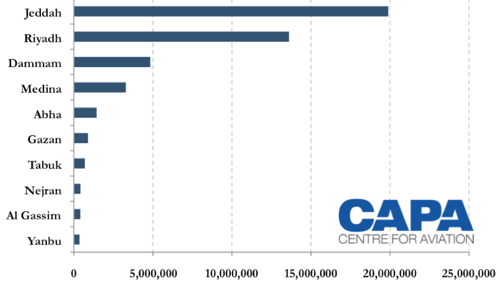 Traffic at the country’s smaller domestic airports rose just 0.9% in 2010, despite heavy investment over the past few years. In comparison, international traffic has averaged growth of 10% per anum over the past four years. Large airports such as Jeddah and Medina are at or above their design capacity and while development plans are underway, capacity concerns and congestion will remain an issue for some time at the major airports. 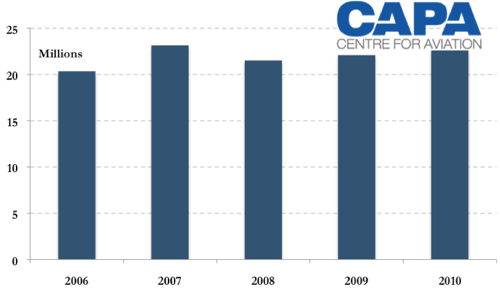 The possibility that the GACA would open the domestic market has been in the background over the past 12 months. In early 2011, the newly formed Saudi consumer protection body urged the Government to open the local market to other carriers from the Gulf Cooperation Council. In Apr-2011, the Saudi Government’s advisory body, the Shoura Council, commissioned a study on a plan to allow Gulf region airlines to carry passengers within the Kingdom. In Aug-2011, the GACA officially confirmed it was assessing such a move.

Despite the end of Saudi Arabian Airlines domestic monopoly in 2007, the Saudi national airline still carried nine out of every 10 domestic passengers and seven of every 10 international passengers in 2010. Saudi Arabian Airlines is slowly restructuring, trying to halt years of losses. The carrier is also in the middle of a long-running privatisation process. Two of its six business units have already been partly privatised and a 2Q2013 deadline for privatisation of the main passenger airline business was finally laid down this year.

The private airline market is not much healthier. One of the two local LCCs, Sama, ceased operations in Aug-2010, after running up losses of almost USD265 million in three years. The second local LCC, nasair, stated in May-2011 that it could go the way of Sama having accumulated losses of more than USD210 million since its 2007 launch.

Originally launched with a wholly domestic focus, the airline has abandoned the majority of domestic routes in favour of international services. The carrier has cut its domestic operations back from 32 routes to services between just five major Saudi cities. With the help of the GACA, it has increasingly branched out to more profitable regional services, adding seven new international destinations this year.

The major issue that has dogged the domestic market in Saudi Arabia has been the local fare cap, which led to large losses on domestic routes. Designed to protect consumes from price gouging in a regulated market, its impact paradoxically in a deregulated environment was that it prevented new entrants from discounting heavily to stimulate growth, as it did not allow them to raise fares close to departure, as LCCs typically do. Discussions on raising the fare cap have gone nowhere, despite considerable pressure being applied, including from the state carrier. The Saudi Government has also failed to provide subsidies for public service obligation routes.

Outside of the fare cap, the high operating costs in Saudi Arabia and the regulatory environment have also militated against profitable domestic operations. This year, nasair claimed fuel costs in Saudi Arabia are “exorbitantly high” compared to other Arab or Gulf countries. Costs at airports are above what nasair would prefer, with monopolies for ground handling, catering and other support services in the hands of the various business units of Saudi Arabian Airlines.

Who will take up the offer?

Just which airlines or investors will be interested in operations in Saudi Arabia is not yet clear. Despite the inherent potential of the underserved market, the prospect of competing against the nationally owned and subsidised Saudi Arabian, all while facing a fare cap on domestic routes, is hardly appealing.

Earlier this year, Air Arabia CEO, Adel Ali, said he saw no reason why Saudi Arabia should to open its domestic market to international competition. In Sep-2011, Emirates commented that it has no immediate plans to enter the market, although given the carrier’s pro-liberalisation stance, it viewed opening up the domestic market as a "positive development”.

The existing sixth freedom carriers in the Gulf already have significant operations into Saudi airports. However, recent history has shown they are increasingly looking to flex their muscle internationally, evident in the recent minority acquisitions in Air Berlin by Etihad Airways and Cargolux by Qatar Airways.

Additionally, Qatar Airways has already taken the plunge and entered the Iranian domestic market. In Oct-2011, it reportedly agreed to operate domestic services within Iran, under an agreement where the carrier will operate through a codeshare with Iran Airways. The situation with Iran is very different from that in Saudi Arabia, but it shows that the possibility is there.

With the GACA now operating as an independent entity and accelerating the restructuring and privatisation of Saudi Arabian Airlines, there are renewed prospects for a more level competitive playing field in Saudi Arabia. Whether this will entice foreign carriers into the Saudi market remains to be seen, but it is clear that Saudi Arabia is serious about resurrecting its travel market.