Unlisted Sama's CEO, Bruce Ashby, confirmed reports the Saudi Arabian LCC will cease operations from 24-Aug-2010 until further notice, as the company failed to receive government support and efforts to find strategic investors to invest in the company failed. The decision was taken after the airline recorded a loss of ZAR1 billion (USD266 million), as the carrier suffered from heavy losses between Oct-2009 and Mar-2010, due to declining airfares and reduced passenger demand.

It has been reported that Sama, which received ZAR200 million as a loan from the government to cover fuel costs and SAR500 million from shareholders, fell short by SAR300 million to keep operations on track. Sama has informed the General Authority of Civil Aviation of its plan.

The airline has previously warned that while it witnessed passenger and revenue growth in the first half of 2010, this had largely been offset by increases in fuel and airport costs. The carrier added that its maintenance subsidiary, Safair Technical (Jetworx), was unprofitable in the six months to Jun-2010. 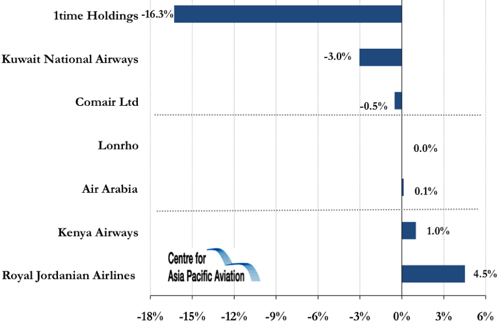