Saudi Arabia’s Dammam King Fahad International Airport (KFIA), on the other side of the King Fahd Causeway connecting Saudi Arabia to Bahrain, is set to become a home away from home for Gulf Air and Bahrain Air. By the middle of Jun-2012, the two competing Bahraini carriers will be operating 37 weekly flights to/from the airport, located less than 100km from Bahrain International Airport, the home for both carriers and the sole commercial airport in Bahrain.

Dammam is Saudi Arabia’s third largest airport by passenger traffic, after Riyadh and Jeddah. It is also one of just four designated international airports in the country. 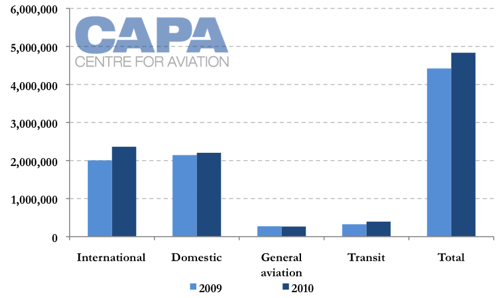 Traffic at the airport has increased steadily, reaching under 5 million passengers in 2010, including 2.4 million international passengers. Airline passengers account for the majority of traffic. 2011 traffic is yet to be reported. Saudia – which recently adopted its old name, dropping Saudi Arabian Airlines – is the largest carrier at Dammam, accounting for 44% of system seats, although with approximately 70,000 weekly seats it has a far smaller presence than at Riyadh or Jeddah, which each see over 260,000 weekly seats. Saudia accounts for 51% of the system seats at Jeddah and 64% at Riyadh.

Bahrain Air announced in Apr-2012 it had selected Dammam as its first hub outside of Bahrain. The carrier plans to launch services from Dammam to Beirut and Sudan’s Khartoum from 13-Jun-2012. Beirut will be served four times weekly, and the carrier will compete with Middle East Airlines and Saudi Arabian Airlines on the route. Khartoum flights will operate three times per week and Bahrain Air will enjoy a monopoly on the route.

Bahrain Air CEO Richard Nuttal commented that the Eastern Province of Saudi Arabia has been a very important market for the carrier since it started operations, but now the carrier can “truly call it our second home”. Many Saudis choose to cross the Saudi-Bahrain causeway and fly out of Bahrain instead of Dammam due to the better facilities and wider range of destinations – and attractive fares – at Bahrain International Airport. 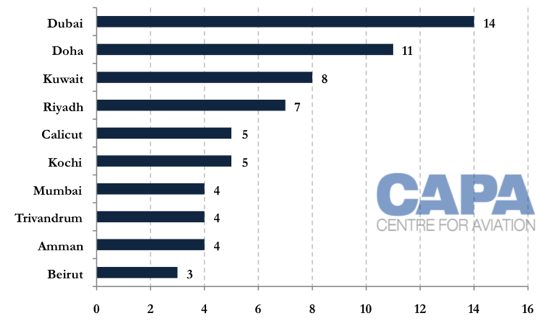 Bahrain Air already operates to Riyadh and Jeddah in Saudi Arabia, competing with Gulf Air on the routes.

Gulf Air upped its Bahrain-Dammam operation from 23 to 30 weekly frequencies on 21-May-2012. This makes the airport the carrier’s fourth busiest for frequencies, after Dubai, Kuwait and Doha. 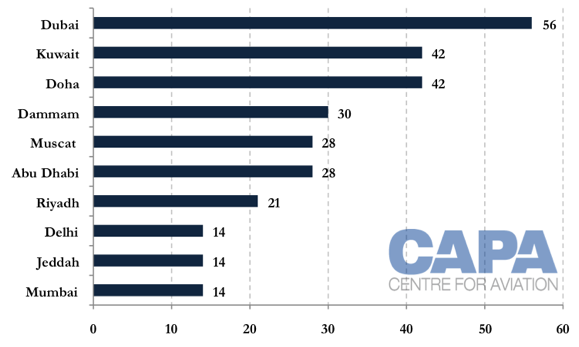 Gulf Air CEO Samar Majali, echoing language from Bahrain Air, commented earlier this month that the carrier sees Dammam as its “second hub”. The airline’s decision to introduce an additional daily frequency reflects both the need to cater to higher demand in the summer peak travel period as well as the importance the airline attaches to Saudi Arabia. It is also a reality that Bahrain, population 1.3 million, is a small market and that small airlines are in need of new markets, especially the ailing Gulf Air. Bahraini carriers must also contend with limited traffic rights.

With the travel ban to Iraq and Iran still in place for Bahraini citizens, Saudi Arabia is Gulf Air’s single most important market. Apart from Dammam, Gulf Air operates to Riyadh, Jeddah and Medina, a total of 71 weekly frequencies.

Bahrain Air has expressed its “thanks and appreciation” to Saudi civil aviation authorities for allowing its second hub in Dammam to proceed. The new hub for the carrier is another example of how the Saudi Arabian General Authority of Civil Aviation (GACA) has been searching for ways to breath life into the Saudi air travel market.

Since 2007, Saudi Arabia has seen the end of the monopoly from Saudia, recently re-branded from Saudi Arabian Airlines, as well as the opening up of international routes to local LCCs and progress on Saudia’s privatisation, despite bureaucratic slowness that has delayed the process considerably. The country has a plan that will see Saudia’s six operating units corporatised and then sold off prior to the privatisation of its mainline passenger business. Saudi Arabian Airlines’ passenger business is due to commence privatisation by the end of 2Q2013, although delays would be unsurprising.

Another positive for the local market is Saudi Arabian Airlines impending membership in SkyTeam. Lebanon’s Middle East Airlines is also due to join this year, filling the Middle East regional gap in the alliance’s global connectivity.

At the end of 2011, the GACA made a dramatic move, announcing it would seek applications from both Saudi and foreign airline companies, as well as foreign investors, for licences to operate domestic and international flights from Saudi airports. 14 companies have tendered expressions of interest. Successful bidders will have the freedom to choose any Saudi airport as its hub and also operate international flights, within the limits of existing bilateral agreements.

The new licences are due to be awarded by Sep-2012, although the GACA has said it will only award a few licences in an effort to avoid over-capacity. GACA has said it will give preference to 100% foreign owned carriers. Liberalisation, however, will not be full as the new carriers will not receive the fuel subsidies given to Saudia and they must also comply with the country’s extensive regulations governing domestic fares. These disadvantages led to the failing of Sama, yet the GACA says it wants to avoid that outcome from reoccurring. Progressiveness is often achieved only in steps.