Etihad Airways's 40% stake in Air Seychelles gives a much-needed second lease of life to Air Seychelles, who says the stake offers a "realistic way forward" for growth, critical as the carrier has scaled back almost its entire network. For Etihad, the opportunity to be a partner in building traffic to the Seychelles, a destination Etihad sees gaining prominence, especially from the alluring Chinese market. Etihad singled out the Seychelles' geographic positioning as a strength in linking the emerging Africa-China market, but it is difficult to see short-term development in that market.

Etihad Airways, fresh from its acquisition of 29.2% in Air Berlin late last year, has announced the acquisition of a 40% stake in Air Seychelles. The Abu Dhabi-based airline will invest USD20 million into the carrier as one pillar of a deeper strategic partnership between them, aimed at rescuing the troubled African airline and providing Etihad with access to a lucrative tourism market.

Etihad Airways’ investment of USD20 million will be matched by a capital injection from the Seychelles Government. Etihad will also provide a shareholder's loan of USD25 million to meet working capital requirements and support Air Seychelles' network development.

Etihad will work in conjunction with Air Seychelles to develop a renewed fleet and network growth plan for the carrier. Certain key functions will be consolidated to reduce costs and optimise processes. Etihad will also provide access to its training facilities as well as other opportunities for personnel development. The agreement also gives Air Seychelles a presence in Etihad Airways offices, offering enhanced marketing opportunities.

The agreement also has a provision for a five-year management contract for Etihad Airways, under which the Middle Eastern carrier will implement “strategic measures” to encourage Air Seychelles’ long-term commercial growth. This has shades of Emirates’ experience with SriLankan Airlines. Emirates took a 40% stake in SriLankan in 1998 for USD70 million, later increasing its stake to 43%. Along with the share acquisition, Emirates took managerial control, a position it held for 10 years.

However, the relationship ended disappointingly in 2008. A very public disagreement between SriLankan Airlines management and the Sri Lankan Government resulted in the temporary withdrawal of the work and residents permit of Peter Hill, Emirates secondee and CEO of the carrier. This prompted Emirates to withdraw from the management agreement and sell its stake to the Sri Lankan Government for USD53 million, almost USD20 million less than it paid for 40% in 1998 and around a third of Emirates’ estimate of the value.

A second lease of life for Air Seychelles

Etihad’s move is a major reversal of fortune for troubled Air Seychelles. The airline lost USD12.5 million in FY2010/11 and in Dec-2011 the Seychelles Finance Ministry announced that it could no longer provide the carrier with “unsustainable” subsidies and underwrite its day-to-day operational expenses. The Seychelles Government has provided the carrier with USD27 million in loans and subsidies since Oct-2010.

Over the final quarter of 2011, the African island carrier announced it was adopting a major restructuring. It appointed its fourth CEO in four years, adopted a new corporate branding and repositioned its focus to concentrate on ‘high-end’ tourism. The airline also reduced its workforce by almost 20%, cutting more than 115 positions.

The major element of its restructuring was the virtual abandonment of its long-haul network, dropped in favour of regional services. The airline suspended service to Singapore, the last remaining of the three Asian routes launched in 2010 and 2011. It followed this up by ceasing operations to London, Paris, Rome and Milan on 10-Jan-2012, excising more than three quarters of its long-haul capacity.

With the culling of its long-haul routes, the carrier returned four of its five Boeing 767s – three years prior to the expiration of the leases – and also cancelled its order for two 787s, which it was to lease from ILFC from 2014.

Operations have been stripped back to Mauritius and Johannesburg using a Boeing 767-300 aircraft. Even these are not immune, as Mauritius capacity was cut in half on 16-Jan-2012 and service to Johannesburg will be suspended at some future date. The carrier will retain its numerous daily island connecting services between Mahe and Praslin Island.

Air Austral had planned to fill some of the void left by Air Seychelles’ capacity cuts, with a Seychelles-Paris CDG service to be launched in late Mar-2012. However, the Etihad/Air Seychelles agreement has caused a rethink at the airline and it has reportedly delayed the route launch.

Air Seychelles cuts have been so dramatic that the carrier is no longer the largest airline operating from Mahe International Airport, the major international airport in the Seychelles. Emirates now operates more international seats per week. 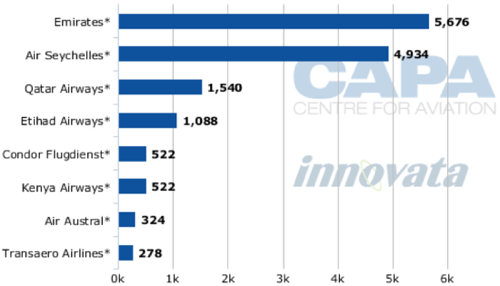 Under the new partnership agreement, Etihad will seek to increase Abu Dhabi-Mahe frequency from four times weekly to daily, as well as providing new services to the islands. Further details have not been disclosed.

For Etihad, the Air Seychelles partnership is another step to enhancing its operations in another growth market. It also offers expansion opportunities in other leisure markets in the Indian Ocean and Africa.

"Asia, and more specifically China, is increasingly important to the Seychelles national economy. Apart from the Seychelles strategic geographic significance as a stepping stone between China and Africa, the island nation is also an important trading partner for Chinese business and an increasingly popular leisure destination for significant numbers of Chinese travellers," Etihad said when announcing the deal.

There is potential to grow traffic between Africa and Asia, China in particular, and Ethiopian Airlines is so far the most aggressive in doing so. Air Seychelles would be unable to support in the short-term a Chinese flight without onward connections to other continental African points, which the carrier will lack after the Johannesburg service is suspended. Even if continental African flights are added, geography dictates that only southern African traffic can be more efficiently routed, in terms of distance flown, over Mahe than Gulf hubs or Ethiopian's hub in Addis Ababa. But those hubs can offer greater scale and points served, advantages that can easily undermine Mahe offering shorter connections by approximately 300nm to northern China or 700nm to southern China.

The agreement is another example of Etihad picking out a straggler from the herd. Both Air Berlin and Air Seychelles stakes were picked up at bargain prices. Prior to Etihad’s acquisition of a stake in Air Berlin, the carrier’s share price was at an all-time low of EUR2.20. 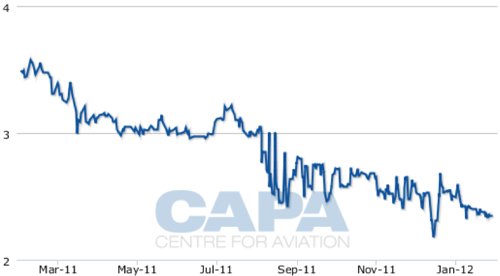 For Air Seychelles and the Seychelles Government, the deal injects USD65 million into the carrier at a time when its future looked bleak. The strategic partnership re-establishes Air Seychelles as a financially sustainable carrier and the relationship with Etihad offers both “international presence” and “strategic penetration”.

According to Joel Morgan, Seychelles Minister of Home Affairs, Environment, Transport and Energy, the deal represents a “game-changing strategic partnership”. It will put Air Seychelles on a sustainable growth trajectory and offers a “realistic way forward” for long-term commercial growth.