Although Chengdu and Chongqing garner attention for their growth in western China, Urumqi, a city even further west, continues to emerge as a hub between East Asia and the under-served region of West Asia, Central Asia and Russia and CIS. Although only the 18th largest airport in China with 11 million annual passengers in 2011, Urumqi's growth is high, its traffic having doubled in two years.

China Southern, Asia's largest carrier based on capacity, is developing a hub in Urumqi and has recently indicated it will accelerate growth. The majority of traffic is domestic while international growth has been concentrated westwards, although China Southern has dabbled with eastward flights outside of the mainland via charters to Hong Kong. Recent revisions to bilateral air service agreements should also see foreign carriers grow their presence in Urumqi.

Urumqi supports domestic growth and positioning as a gateway to China

Urumqi, China's most northwestern major city, is much closer to Almaty, Kazakhstan (844km) than Beijing (2436km). Air services function as an international westerly entry point to China as part of the country's plan to have hubs throughout the country to more efficiently distribute traffic.

Urumqi's hub status, even if small, also supports local economic growth in Urumqi and the province of Xinjiang. There are political undertones: Urumqi has long been home to contention between the Han majority and Uyghur minority, which erupted in Jul-2009 with ethnic riots. Uyghurs, who believe Xinjiang was historically not part of China, contend the Government favours the Han. Economic development as well as social changes have been introduced to develop the area and, the Government reckons, bring stability.

Urumqi's population is over three million while Xinjiang province has a population of 22 million. Traffic in 2011 at Urumqi Airport surpassed 11 million, a record, and in the first four months of 2012 (the latest data available) was up 22%. 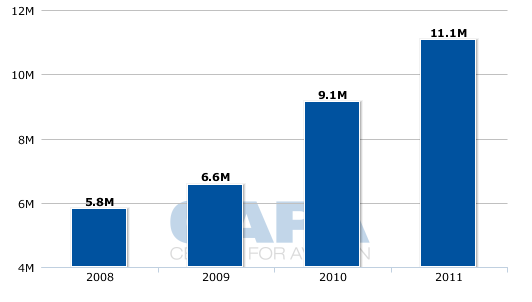 China Southern currently accounts for about 44% of available domestic seats and about 73% of international seats. Domestic seats represent almost all – 94% – of total capacity at Urumqi. China Southern is the largest operator by far, with its next domestic competitor – Hainan Airlines – accounting for 13% of seats and the rest holding a single-digit percentage share. 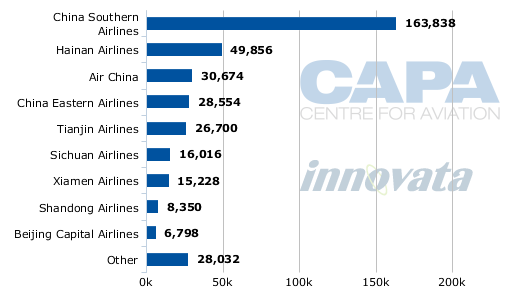 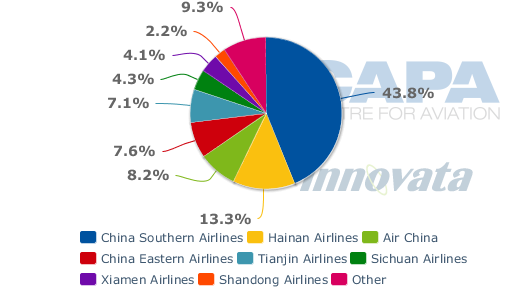 China Southern has developed a large and growing hub at Urumqi, with upwards of six daily flights to Beijing, including three that were upgraded to Boeing 777-200 equipment on 15-Jun-2012.

New or increased domestic flights from Urumqi announced in 1H2012

With a main hub at Guangzhou in the southeastern part of the country, China Southern has been a weaker contender in the country's trunk routes along the east coast. While its Beijing hub has helped its presence in eastern China, China Southern's Urumqi hub gives potential for a slightly strengthened domestic position by offering links to Urumqi and the surrounding region that no other carrier offers comparably. Urumqi will take on greater prominence in domestic growth as China Southern's Guangzhou hub continues to mature and Beijing is capacity limited until the middle of the decade when a new airport is due to open.

Urumqi is also poised to become a notable international hub. It sits within two to three hours of the Central Asian countries of Kazakhstan, Uzbekistan Tajikistan, Turkmenistan and Kyrgyzstan, a region that is seeing growth but slower development in air links. Slightly further west are Georgia, Azerbaijan and Turkey.

Urumqi's geography allows it to function as a hub conducive to efficient air links through those countries. Also in the region are countries including Afghanistan, Pakistan, Iran and Iraq, but those countries are either still developing basic aviation networks or would be more geographically conveniently served through Chengdu or Chongqing when demand suffices. (China Southern does offer a Tehran-Urumqi service, but this is the only flight linking China and Iran besides Iran Air's flights to Beijing.)

The opportunity for China Southern's international network is to use Urumqi as the hub for incoming western traffic and then maximise possible connections. With Urumqi being close to West Asia and Central Asia, it can serve destinations with narrowbodies whereas flights from Beijing or Guangzhou would require widebodies, which may supply not only too much capacity but routing to east coast hubs would limit connections or create circuitous journeys for some trips.

All of China Southern's international services at Urumqi are operated by narrowbodies with the majority having limited weekly frequency. Competition is relatively light. China Southern benefits from having access to its huge domestic market while traditional sixth-freedom carriers cannot efficiently link West Asia with China, allowing Chinese carriers and China Southern in particular to boom as this market further develops.

New or increased international flights from Urumqi announced in 1H2012

Only eight foreign airlines currently have scheduled service to Urumqi, their presence overshadowed by China Southern, which accounts for about 73% of international capacity at the airport. But that is expected to change with recently revised bilateral air service agreements. Urumqi Airport says it expects at least one new international carrier this year.

There are also opportunities for the eight existing foreign carriers to increase capacity as none of them currently serve Urumqi daily and almost all their flights are operated with narrowobody aircraft. The one exception is a single A310 frequency from Ariana Afghan Airlines. 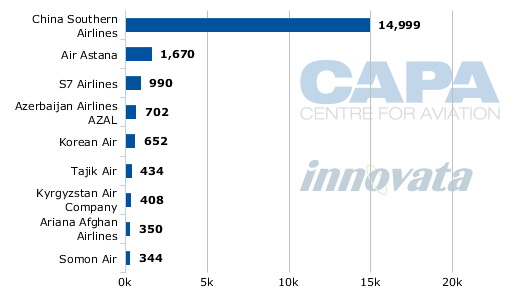 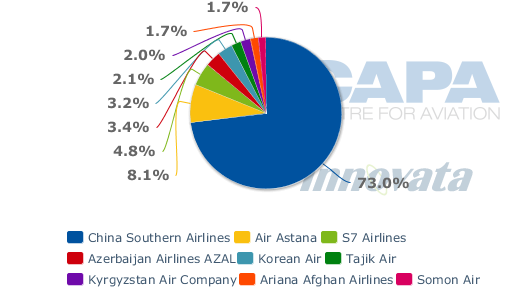 Urumqi is now linked with Kazakhstan's largest city, Almaty, by China Southern and Kazakhstani flag carrier Air Astana while Air Astana also links Urumqi with the capital Astana. Air Astana has said it plans to capitalise on the Kazakhstan-China bilateral and upgrade both its Almaty-Urumqi and Astana-Urumqi routes to daily. It now serves Astana-Urumqi twice per week with A320s and Almaty-Urumqi three times per week with A321s while China Southern serves Almaty daily with 737-800s. Air Astana is the largest foreign carrier serving Urumqi and Almaty is one of only two international destinations at China Southern's Urumqi hub that is currently served daily.

Ultimately Urumqi can be a part of the puzzle of how Chinese carriers can take a greater share in sixth freedom traffic, using geography and their low cost bases to reshape today's sixth freedom flows. Currently Urumqi is the first stop for traffic flowing from West Asia, Central Asia and surrounds to the rest of Asia – and even Australia – with China Southern carrying notable numbers of passengers from Russia to Australia via its Chinese hubs. The second stop for sixth freedom passengers is one of China Southern's hubs focused on Australasian services. The pattern works in reverse, with China Southern funnelling passengers from Asia through Beijing or Guangzhou (and soon Chongqing) and then to Urumqi for onward service to West Asia.

In due time the middle stop could be eliminated as Urumqi sees international services from the east. Urumqi sees service out of the mainland via Korean Air's twice weekly service to Seoul and occasional China Southern charters to Hong Kong. For now, Urumqi's focus will likely continue to be westerly and not towards the east. While Urumqi in the medium- or long-term may be able to support more easterly international services, for now it has enough opportunity scooping up traffic sitting to the west but out of the reach of European and Middle East network carriers.