While Japan attracts attention for the three new lost-cost carriers being established there this year, there are also significant changes under way in its long-haul and full service carrier space that are occurring independently but also consequent to the LCC movement.

All Nippon Airways (ANA) intends to have Lufthansa group carriers Austrian Airlines and Swiss International Air Lines join its Japan-Europe joint-venture with Lufthansa German Airlines. The combined entity will control 33% of Japan-Europe traffic, the largest share of any immunised alliance. This will bolster ANA as it intends to grow its long-haul network, relying less on its LCC-invaded short-haul network, and is also a move against Japan Airlines (JAL), which is strengthening its position with International Airlines Group (IAG), and perhaps Finnair in due course.

ANA's stated intentions to consider acquiring foreign carriers, including LCCs, and lending management advice could further revolutionise Japanese aviation, but not without perhaps significant implications for any acquired airline.

Finally, in a further demonstration of Japan's leading position in North Asia of liberalisation, which will influence neighbouring countries with traffic benefits to follow, France has secured coveted daytime slots at Tokyo Haneda airport as part of the Japan-France Open Skies Agreement, Japan's 17th such agreement since 2010, a liberalisation pace that rivals that of Gulf nations.

ANA with Austrian, Lufthansa and Swiss to control 33% of Japan-Europe market

The anti-trust alliances that started on either shore of North America and stretched across the Atlantic and Pacific are now encircling the globe with a dominating presence, as shown by ANA's application to Japan's Ministry of Land, Infrastructure, Transport and Tourism (MLIT) to add Austrian and Swiss to its JV with Lufthansa. Austrian and Swiss each represent 3% of capacity between Japan and Europe, giving the ANA-led entity, if approved, control of 33.4% of traffic between Japan and Europe based on current capacity levels. 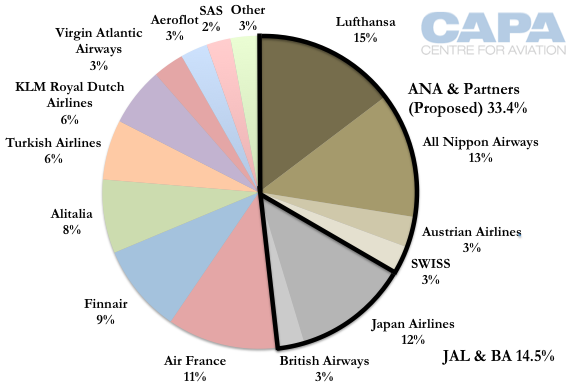 The alliance between Japan Airlines and British Airways accounts for 14.5% of capacity in the market, potentially giving ANA and its partners the largest share of any major immunised alliance. The current largest share is between ANA and United across the Pacific, where the two account for 30.7% of traffic.

Austrian and Swiss each have a sole Japanese route, Austrian a daily Boeing 777-200 flight between Vienna and Tokyo Narita and Swiss a nine-weekly Zurich-Tokyo Narita service (in the low season, this drops to daily).

The much larger addition is in Europe, with the group to increase European destinations from 102 to 128 along with commensurate increases in intra-European routes and flights.

The expanded European network comes as ANA targets international growth, moving away from the Japanese domestic market, which accounts for 87% of ANA's available seats and will be placed under heavy pressure as a significantly growing and price-transforming domestic LCC market takes hold; LCCs in Oct-2012 will account for 19% of domestic seats, twice last year's average figure.

ANA plans to have 22% more international available seat kilometres in FY2013 than FY2011, and nearly 40% more sometime after FY2014. These figures exclude AirAsia Japan but include codeshare services.

ANA in due course, aided by a possible recovery in Europe, could look to expand its presence on the continent, currently limited to Frankfurt, London, Munich and Paris. Vienna and Zurich could be capable of supporting joint double daily services to Japan given network connections, especially Vienna's location more east of ANA's other served cities, allowing for connections without backtracking.

JAL will receive its own springboard into Europe with services to Helsinki to commence in 2013. Finland and Japan have signed an open skies agreement, and together with Finnair's large presence in Japan (9% of total Europe-Japan seats), Finnair could be added to the IAG-JAL alliance, which represents 14.5% of seats in the Japan-Europe market but could rise to 23.5% with the addition of Finnair, making JAL a more formidable opponent to ANA.

ANA, often the more progressive of the two Japanese majors, was the first to have a Japan-Europe JV, which commenced in Apr-2012. IAG and JAL received permission in May-2012 for their JV. Like ANA, JAL is targeting more international services and aims to have 25% more ASKs (including on codeshare services) in FY2016 compared to FY2011.

Skymark and SkyTeam to provide an offset to oneworld and Star?

The formation of JVs, especially JVs with 33% control of a market, will make it harder for new entrants to secure a position than in previous times. This implication will be felt most on Skymark, which with a fleet of A380s, is including European and North American cities as targeted points.

With SkyTeam having no Japanese member, Skymark could fulfill that role, either as full-fledged member or partner with relevant carriers, such as Delta across the Pacific, and Air France-KLM and Alitalia to Europe. The marriage could be one that is less of convenience and more of competitive necessity, and in doing so create a new partner-inclined intercontinental carrier in the world's fourth largest domestic market.

ANA plans bigger reach via acquisitions, but the path may not be easy

In a surprising disclosure, ANA has said it plans partially to use proceeds from a JPY211 billion (USD2.6 billion) share issue to boost its balance sheet should it proceed to acquire another carrier – full service or LCC – as part of an effort to gain access to growth markets, including growth airports. While official comments are limited, ANA appears to have its eyes wide open, with an ANA officially telling Reuters anonymously, "We have no intention of taking small minority stakes in a number of different carriers, simply marking our territory.... Eventually we want to take majority stakes in airlines in different countries." ANA already has minority stakes in its two affiliate LCCs, AirAsia Japan and Peach.

The plan raises a number of questions – and some concerns. Foreign control of carriers is rare and, when permissible, is accompanied with caveats, such as European Union countries allowing foreign control only by another EU company while Australia and New Zealand permit foreign control only of domestic carriers. More conservative than an ANA official speaking to Reuters was one who told The Financial Times ANA would look to start with a minority stake in a carrier but then increase it as markets liberalised. If it is this long-term view that ANA is pursuing, then that would shape the sort of decision on acquisition it would make in the short term.

Minority stakes are becoming more common – examples include Etihad's portfolio, Air New Zealand's stake in Virgin Australia, Delta's stake in Gol and cross-holding between Air China and Cathay Pacific – but cause for concern may surround ANA's intentions to exert management influence. Although ANA may traditionally be the more innovative, and prior to JAL's bankruptcy reorganisation was the leaner carrier, it claims no managerial best practices. This was evident in the establishment of Peach, in which ANA management was heavily involved and which took 18 months to launch compared to the 12 of AirAsia Japan and Jetstar Japan. While Peach claims a lower cost base than ANA, Peach is not low cost by global standards.

ANA has done well in its main business area, rising above the country's flag carrier, but it has yet to demonstrate leadership outside of relatively isolated Japan. An experiment of full control of a foreign carrier in a more global location would allow little room for error or inefficiency.

Japan's Open Skies agreement with France may not be its most important but it does show Japan's view towards progressive liberalisation is embedded as part of a broader strategy to use aviation as a growth catalyst to combat its declining population and economy. In addition to lifting capacity restrictions (including at Tokyo Narita from FY2013 when slots increase to 270,000 annually), the Japan-France Open Skies agreement awarded France daytime Tokyo Haneda slots for the first time. It was only a single pair, but it was significant.

Japan's MLIT has stipulated the additional international daytime slots will be used for "flights on high-demand, business routes connecting cities of the world with Tokyo".

Japan recently revised bilateral agreements with Qatar and the United Arab Emirates – a deep bow to national interests as opposed to flag carrier protectionism – and awarded the two sides Haneda slots – albeit in the late evening/early morning, a period that has so far proved unpopular due to their limiting of connections and ground transport options for passengers. Lufthansa in particular has struck out against this timing.

Other countries should expect greater receptiveness from Japan for daytime Haneda slots as the expansion programme nears. South Korea and greater China (including the mainland, Hong Kong, Macau and Taiwan) currently hold daytime slots while the UK earlier this year secured daytime access for after Haneda's slot expansion.

An implication far greater for Japan's neighbours is the pressure they will fall under to liberalise. South Korea, once the most progressive liberaliser in the region, is becoming a holdout, and if competitive pressure does not sway, economic interests may: Seoul Incheon International Airport speaks of becoming North Asia's singular hub, an achievement that cannot be achieved with closed doors.

While Japan's LCC movement may receive limited interest outside of Asia, its liberalisation of air services is global and will be increasingly influential on neighbouring countries. These moves will entrench liberalisation in the region over the years ahead, as well as introducing smarter competition.

JAL may add Finnair to its JV while ANA could look at other Star partners like SAS.

ANA's merger and acquisition plans add another dimension, even if they are ahead of their time. But one message is certain: after years of stagnation, Japan has realised change is necessary and that it will continue.