ANA – and Japan's transport system – appears oblivious to coming LCC impacts, which will be vast

All Nippon Airways (ANA) has reported a very strong financial result for the past year, despite severe headwinds in the wake of the Mar-2011 tsunami and nuclear disaster. This augurs well for the short term as new Boeing 787s arrive and international partnerships are forged with the carrier's Star Alliance partners.

But in its forward vision there appears very little to suggest management fully comprehends the likely impact the three new LCCs (as well as an expanding Skymark) will have on Japan's domestic and regional short/medium-haul markets. And, in Japan's carefully managed transport system, embracing its world class shinkansen high-speed rail and high quality toll roads, pricing instability is about to disrupt travel behaviour in ways seemingly not apparent to Tokyo's planners.

A quick look at what has happened elsewhere in the world, once truly low-cost airline operations arrive, should be enough to make any observer aware of the potential of adding three new LCCs to Japan's slumbering domestic market in the space of six months. But apparently not in Japan. As has been observed many times in this context: once this egg is scrambled, it does not go back in its shell.

ANA is dominant in Japan's very high value domestic market. It is a market that has been characterised by a very high cost structure, partly imposed by excessive regulation and airport over-building and partly by the very opaque and closed (but very high quality) transport network, with micro-management of the duopolistic airline system. Successful independent carrier Skymark has shown that a real challenge can be mounted, even with a slightly lower cost base and a more focused management attention to efficiency details. But there is much – much – more to come in 2012 and beyond.

ANA's already large exposure to the domestic market will quickly face aggressive price competition from LCCs, yet its outlook growth projections seemingly do not encompass any serious accounting for the impact of the new entrants.

See related article: All Nippon Airways confident due to financial success but there are changes ahead

For example, early differentials between part-subsidiary Peach and ANA on Osaka-Sapporo fares are in multiples of hundreds of percentage points. These presage similarly large market disruption. Though ANA flies out of the more convenient downtown Osaka Itami Airport and Peach out of Kansai, disparities of this magnitude have never been witnessed in Japan before and it is unlikely that they can be contained for long.

ANA is involved with two of the three new LCCs launching in Japan: Peach, which launched in Mar-2012, and AirAsia Japan, which launches in Aug-2012. ANA could look to control the impact and cannibalisation of the LCCs on its mainline business, but doing so would be short sighted – as experience elsewhere in the world has shown – and to its own detriment as competitor Jetstar Japan, launched with Japan Airlines' (JAL) backing, would take advantage of any self-imposed handicapping of ANA's LCCs. Already Jetstar Japan is promising a stronger launch than Peach and AirAsia Japan.

The potential of LCCs to disturb ANA's network receives only a passing mention in ANA's forward operating risks discussion following its 2011 report. "The possibility exists, meanwhile, that too many passengers could transfer their business away from the Group to the LCC business, and the forecasted returns would therefore not be realized," ANA says.

But ANA also strangely discusses the possibility of a downturn in the unlikely event of a crash and the even more unlikely scenario that its LCCs would shut down due to low demand. ANA has not prioritised or assigned magnitude to risks, of which cannibalisation is large and real.

Also not evident from ANA is recognition of the planned growth of LCCs. ANA firmly holds a view it is planning towards that each LCC can expand by five aircraft per year. “Our calculations show that the three LCCs in Japan, including our two, will expand by 15 aircraft a year. Over the next four years through fiscal 2015, there will be an expansion of about 60 narrow-body aircraft,” ANA has said.

Yet Jetstar Japan has given the abstract fleet plan of operating 24 aircraft “within its first few years” while ANA gives the medium-term projection for AirAsia Japan as “25-30 aircraft maximum”. Jetstar reckons it can have 100 aircraft by the end of the decade, growth that is potentially more than twice that planned by ANA.

In a currently extremely high fare market like Japan, the potential for unprecedented market growth is very present. Even though costs are high, the internal cost levels and efficiency attitudes of full service airlines remain well out of step with global practice. Moreover, in Japan's hitherto opaque transport system, the relatively high domestic air fares have shielded Shinkansen and toll road travel from serious competition.

In other words, LCC growth will not simply be a matter of extrapolating on existing air travel growth trends, but will both change travel behaviour and divert travellers away from other modes. The government-owned activities will be able to respond in pricing terms in the short run, but over time the costs of subsidy will be prohibitively high, as well as being unnecessary where cost-based alternatives emerge.

It is not all negative however, because there has always been a substantial stimulatory effect when new low fares are introduced. This in turn can be enormously beneficial to the overall economy.

Despite ANA’s low projections for LCC growth, when asked what reach LCCs could achieve, ANA declined to specify but openly conceded “the fact is that LCCs have taken a 30% share of the European market”. Even one of ANA’s partners, the AirAsia Group, is already hinting at faster growth for AirAsia Japan. AirAsia CEO Tony Fernandes on 11-May-2012 remarked on Twitter: “Japan plans fantastic. We need more planes there.”

The higher LCC growth rates increase the amount of what ANA recognises is inevitable cannibalisation. “We do not believe that there will be zero cannibalisation from our existing air traffic demand,” ANA has said. “Since AirAsia Japan is a consolidated subsidiary, we think any demand shift or cannibalisation is acceptable as long as the Group revenue grows in total.”

Missing from the equation, however, is responding to cannibalised ANA mainline traffic, such as by shrinking capacity that will not be taken up or not done so profitably. Already Peach is showing the mild effects of diverting ANA's traffic.

There will be disruption – and a big need for adaptation

Contention between ANA and its LCCs – some ANA staff are already resistant towards the start-ups – is likely to increase with ANA’s mid-2013 restructure to be a holding company. Current subsidiaries report to ANA mainline but the holding company structure will see each division – ANA mainline, LCCs and other divisions – report to the group. “Each Group company will be responsible for its own independent approach, and for quickly and efficiently conducting its business. This is how we expect to turn the rudder in response to global competition,” ANA says.

Full independence in corporate Japan will simply not be achieved, but the perception of theoretically having it will cause the subsidiaries, and LCCs in particular, to want to act independently. For the LCCs, this will mean growth higher than what is envisioned by ANA mainline. In the holding structure ANA may technically be another division, but it will most certainly be swaying group strategy if not calling the shots.

Examples of successful dual brand strategies are not prolific but where they exist have allowed both divisions to grow. This is not to say ANA mainline cannot have net growth, but the challenge will be to secure profitable growth: an average 60-65% domestic load factor is not stellar. Nor, in passing, is it environmentally effective.

The Japanese market can be skewed, with peak hour flights full while off-peak flights are half-full at best – and that is when larger aircraft are not parked in the middle of the day. Capacity discipline may see peak-hour revenues decrease, but losses would be stemmed, increasing profit and margin.

Growth will be further challenged by JAL’s bankruptcy reorganisation, which allowed it to cut its bloated – even by Japanese standards – cost base and come in below ANA'a level. “We understand that we will not be able to compete over the next two years directly on costs with a competitor coming out of reorganization procedures,” ANA says. While the carrier intends to achieve JPY100 billion in cost savings to restore its cost leadership, JAL will be watchful of wanting to maintain its cost position.

ANA has flagged interest in more European routes as well as additional US services besides the already announced Seattle and San Jose routes. The carrier is also targeting its backyard, looking to add services in Asia “unserved by our network”, such as to Myanmar, which the carrier is now planning.

The routes will help increase ANA’s position as a sixth-freedom carrier, a status it is contemplating how seriously it wants to pursue. These, however, are also routes where short/medium-haul competition is set to blossom with new LCC entry (Asian LCC operations typically operate much longer average stage lengths than their European counterparts) and strategies will quickly need to be developed to secure these markets if the sixth freedom approach is to be pursued. 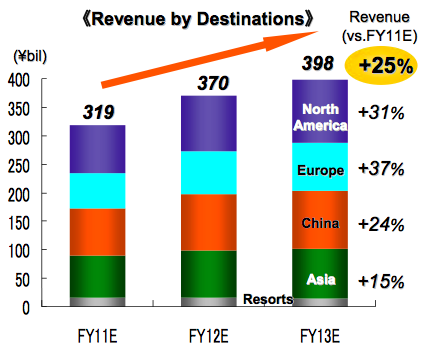 Increasing international load factors will also be a target, although not as pressing as on the domestic network. ANA’s 75.3% FY2010 load factor dipped to 73.7% in FY2011 – largely a result of the Mar-2011 earthquake. ANA does not expect to return to its FY2010 load factor until FY2013.

For short-haul international flights, ANA will want to – and probably manage to – maintain dominance at Tokyo.

But it cannot ignore under-served regional cities that will be prime pickings for international services by LCCs, either because the LCCs face Tokyo access constraints or they want to develop new markets. And, as observed elsewhere, as soon as the sleepy councils and tourism bodies which run the dozens of under-utilised regional airports awake to the potential of new low-cost air services, the momentum for change will accelerate rapidly.

This ingredient may be the sugar to the otherwise perhaps unpalatable pill of disruption which the new wave of LCCs will bring. They will certainly shake the status quo. And even despite the likely default responses of Tokyo's regulators to seek to slow the process of change, this looks likely to be one egg that will remain firmly scrambled.