Japan's aviation scene, which had few significant movements over the past decade, will be turned on its head in just five months, encompassing the time three new low-cost carriers will enter the market, the latest of which is AirAsia Japan. Preliminary schedules show AirAsia Japan and Jetstar Japan, both based at Tokyo Narita, will compete head on from Tokyo to Fukuoka, Okinawa and Sapporo. The market, which has grown accustomed to the presence of two main carriers and a handful of smaller ones with little movement in fares, will be inundated with new and aggressive competition offering typical LCC fare stimulation. Adjustment time will be brief as AirAsia Japan within two months is due to enter short-haul international markets.

Yet despite the compactness of LCC activity, preliminary nuances in strategy are emerging between the carriers. Jetstar is favouring domestic flights, partially replicating its extensive domestic operations in Australia and New Zealand whereas AirAsia has a greater regional emphasis, reflecting its experience in Indonesia, Malaysia and Thailand. Peach is more conservative but building both a domestic and international network.

With Jetstar talking of having 100 aircraft in the country by the end of the decade and AirAsia discussing widebody flights, there is room for strategies and focuses to change as the carriers find their place and compete with each other, all the while as the North Asia market does nothing but benefit.

Peach does not operate any of those routes as it is based at Osaka Kansai. (Jetstar's primary base will be Tokyo Narita with a smaller presence at Tokyo Osaka.) AirAsia Japan received its Air Operator's Certificate (AOC) in Feb-2012.

With 236,160 weekly seats, Tokyo-Sapporo is the second largest air route in the world based on available seats (from Haneda Airport, although still indicating the potential for LCCs). Tokyo-Fukuoka is the fourth largest air route (again, from Haneda).

From 01-Oct-2012 AirAsia Japan will open a daily return service to South Korea's Seoul, the capital, and Busan, Korea's second largest city. Peach will operate to Seoul from its Osaka base while Jetstar Japan, in its initial schedule through 27-Oct-2012 has not loaded any international flights.

Source: CAPA – Centre for Aviation
* AirAsia Japan schedules for week of 01-Aug-2012 as filed in OAG

Tokyo-Seoul is heavily trafficked and sees service not only from each country's main two carriers – All Nippon Airways (ANA) and Japan Airlines (JAL) in Japan, Asiana and Korean Air in Korea – but also Delta Air Lines and United Airlines, which have fifth freedom rights from Japan. Eastar Jet, a Korean LCC, recently withdrew from the route. 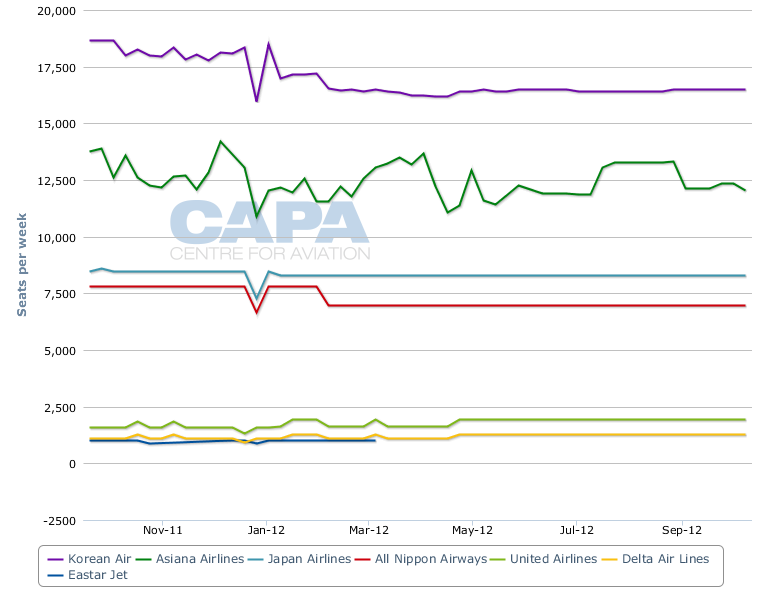 Tokyo-Busan sees far less traffic and operators. In addition to Delta, JAL and Korean Air, Air Busan operates on the route. Air Busan is the low-cost subsidiary of Asiana. 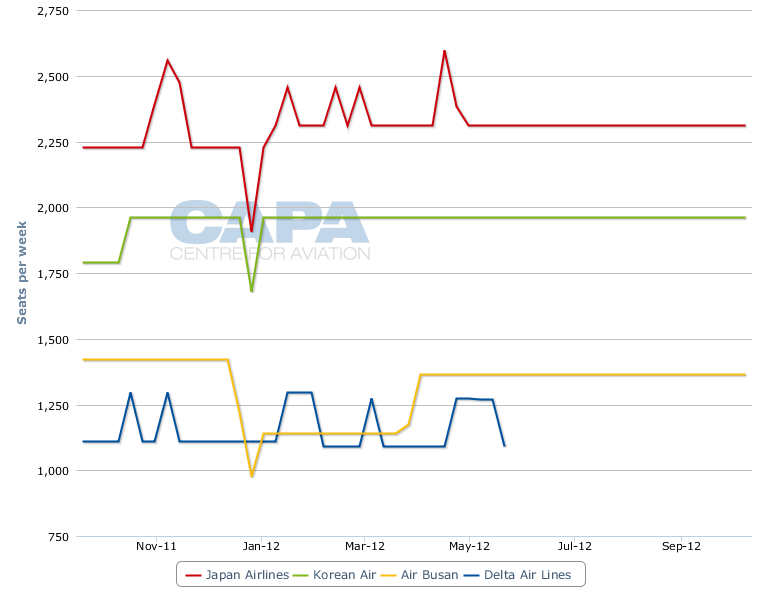 AirAsia's initial routes will see it devote 22% of seat capacity to international markets, compared to 31% from Peach and none from Jetstar Japan.

This preliminary trend from the pan-Asian LCCs is partially consistent – and sensible – with their wider operations. Jetstar has gained considerable domestic experience from its operations in Australia and New Zealand and the associated knowledge of building scale in a single market. It is also best positioned to have domestic operations owing to Japan already being familiar with the Jetstar brand primarily through Jetstar (Australia) flights from Japan to Australia offering approximately 7000 weekly seats.

Although there are carriers in Japan that consider themselves LCCs, their service standards are high and they are not like AirAsia, Jetstar or Peach, which operate a far more stripped-down model without perks. The stripped-down LCC model in a such a high service-oriented country like Japan will require adjustment time. Jetstar has succeeded on long-haul flights – although many tickets are sold through travel agents who bundle in meals and luggage allowance – but in the much larger short-haul market, Jetstar may prefer to launch on domestic routes where flight times are short and exposure to the LCC model brief.

In the medium-term, international competition will be greater whereas domestic competitors will be more manageable. International competitiveness will more likely be based on unit costs – a measure new carriers, especially from China, can undercut. In comparison, the domestic market will be more limited with opportunities to build greater loyalty. There is an incentive to dominate early on a dependable and resilient domestic market rather than an international market that will see many changes.

The AirAsia brand has more limited exposure to Japan owing to AirAsia X flights from Tokyo Haneda and Osaka Kansai to Kuala Lumpur. It also, unlike Jetstar, has exposure to Korea, through AirAsia X flights (to Seoul, although management has discussed additional points). This gives it an easier marketing task than if Jetstar were to enter, although Jetstar Japan's entrance in the short term is very likely.

Peach in comparison will be establishing its brand from scratch wherever it goes. Its base at Osaka Kansai, further southwest than Tokyo on Japan's main island of Honshu, lends it to have more popular international routes than domestic ones. Geographically Osaka is closer to China, Hong Kong, Korea and Taiwan than Tokyo.

From Tokyo, popular domestic routes are north to Sapporo on Hokkaido island, where Japan's efficient and popular shinkansen bullet trains do not reach, and to the south, where air travel is more competitive with bullet trains. Osaka also has a popular route to Sapporo, but the southern Japanese destinations popular from Tokyo are accessible from Osaka on the shinkansen, reducing demand for air services. In the top 100 air routes in Japan by available seats, Tokyo occupies 26 positions, all but six domestic. On the same ranking Osaka occupies seven positions, three of which are for international routes.

Japan's new LCCs have their niche, but change is easy

Japan's three new LCCs, which are also the country's first and would be globally recognised as LCCs, are carving niches. For AirAsia and Jetstar it is based on their pan-Asian experience with their brand whereas Peach, a newcomer all together, is following market dynamics of its Osaka base. But it will not require much to change the status quo, and, indeed, change is guaranteed. Peach is more Japanese than the generic AirAsia or Jetstar brands, and while foreign brands tend to do well in Japan, that is only if they are perceived as luxurious, which LCCs by definition are not.

Geography is also a factor. Jetstar Japan after launching its Tokyo Narita hub will establish a smaller base at Osaka Kansai. ANA, which partially owns Peach and is a part-owner in AirAsia Japan, for now is not eager to see its LCCs overlap. All of the carriers will launch additional bases, the success of which could shift the balance of the LCCs' standing. There are even scenarios where Peach could establish foreign bases.

The next few years will see the carriers jockey amongst themselves, but after that will increasingly have to compete less with each other and more with foreign carriers, all of which will likely have lower costs, be them LCCs from lower cost countries or even full service carriers from mainland China. Change in the domestic market may be easy, but is less so internationally.