The launch schedule of Jetstar Japan, the LCC to commence services on 03-Jul-2012, is more aggressive than the Mar-2012 launch of competitor Peach, reflecting not only a market that will see tremendous and competitive growth in a very short period of time, but also the greater freedom enjoyed by the country's second wave of LCCs like Jetstar Japan.

While Jetstar in its first week will operate up to six daily return flights, one less than Peach launched with, the carrier will quickly ramp up operations, ending its first two months with 14 daily flights, more than the 11 daily flights Peach will have at the end of its first 3.5 months.

Jetstar Japan's launch will see four more of the world's 20 most populous routes have competition from LCCs, leaving only three routes served exclusively by full-service carriers in a reminder of greatly shifting tides. While LCC presence in China is the next objective, so too is domination: the world's most populous route is already controlled by LCCs.

Jetstar Japan will also have launched operations within 11 months, compared to 18 months for Peach. The Japanese aviation market is undergoing a historical structural shift and Jetstar Japan, as well as AirAsia Japan, caught a wave more conducive and productive than Peach, although the latter retains first mover advantages, especially in the lucrative international market. Both will soon face competition from AirAsia Japan while Peach ponders if it can take on the two megabrands or if it will be relegated to second-tier status.

Although the history of LCCs in Japan is short – and this excludes quasi-LCCs like Skymark, Solaseed or Star Flyer – they have already diverged into two waves. The first is occupied solely by Peach, whose presence was a fundamental change for parent company All Nippon Airways (ANA). Resistance was encountered. As a result, not all cost savings were identified and lean operations were not immediately possible – compare its 18 month launch to Jetstar Japan's 11 months.

The second wave of LCCs, including Jetstar Japan and forthcoming AirAsia Japan, established themselves in an environment where, despite only a few months, local carriers were more receptive to LCCs and understood imperatives for lean operations. Jetstar Japan is being launched in affiliation with Japan Airlines while AirAsia Japan is being launched in affiliation with ANA. While Jetstar Japan and AirAsia Japan are having a warmer reception, the environment is still not supportive of all LCC practices, adding costs. Further advantages will be enjoyed by a third wave of LCCs likely to launch in the coming years.

These characteristics are evidenced in the carriers' schedules. Peach in its first week served two routes – Fukuoka and Sapporo from its Osaka base – and added two more within a month. Jetstar is launching with four routes in its first week while adding a new base and two new routes within two months. Additional expansion beyond that is likely, but Jetstar has not released schedules for flights after 27-Oct-2012.

While Peach was conservative in its launch, wanting to build scale, Jetstar Japan is more bullish, wanting to secure a leading position on many routes before AirAsia Japan enters and Peach encroaches. While Jetstar may see higher initial losses by not having large scale – although its brand and distribution is more powerful – Jetstar Japan is confident the enormous potential of the market will see it make returns. In that case, larger initial losses can be an acceptable tradeoff for a stronger position in the long term.

Source: CAPA – Centre for Aviation
Notes: Jetstar Japan schedules for week of 03-Jul-2012 while Peach schedules are for until 30-Jun-2012, latest data available

Jetstar's first commercial flight is scheduled to be a Tokyo-Sapporo return service, departing Toyko at 0820 and arriving at 1000.

On 24-Aug-2012 Jetstar Japan will add frequencies, destination and a second operating base. It will have 14 daily services. Peach has not yet filed schedules beyond 30-Jun-2012, but based on current schedules is operating 11 daily flights. While further domestic expansion from Peach is likely in addition to already announced international services, Jetstar will still be ahead of where Peach was two months after its launch.

Source: CAPA – Centre for Aviation
Notes: Jetstar Japan schedules for week of 24-Aug-2012 while Peach schedules are for until 30-Jun-2012, latest data available

Jetstar's first week of service includes a daily Tokyo-Osaka flight, increasing to two on 24-Aug-2012. Tokyo-Osaka is the ninth largest route in the world based on seats, although that is for capacity from Tokyo Haneda to Osaka Itami, the cities' closer downtown airports; Jetstar will operate out of further Tokyo Narita and Osaka Kansai. Links between the two cities are more extensive, though, with the shinkansen bullet train linking the two cities with departures up to every 10 minutes. Travel time is approximately the same as flying when considering door-to-door timings. The convenience, however, does come at a large cost. There is significant room for fare stimulation – as there is on nearly every Japanese route – but Jetstar has the disadvantage of operating from less convenient airports.

Immediate capacity may also be better deployed on routes where air travel, in terms of time, is more competitive with the shinkansen or where the shinkansen does not reach at all. With Jetstar envisioning 100 A320s operating in the country by the end of this decade, Tokyo-Osaka will see growth in Jetstar's network, but it will not be the most significant route the way it is a flagship route for ANA and Japan Airlines (JAL). Jetstar makes no apologies for being a for-profit company and has routinely across its network placed capacity where returns are strong, even if the city pairs are not considered high-profile. The carrier is also not tempted to immediately use its Boeing 787 aircraft to open routes to high-profile destinations in the US or Europe, seeing that greater returns are within Asia Pacific.

But Jetstar's presence on Tokyo-Osaka could be indicative of the more relaxed environment it is operating in compared to Peach. Jetstar has JAL and Jetstar management and a split ownership whereas Peach is fully owned and run by ANA, which may not want to see a LCC enter its prestige routes. The loss would not be great to Peach as there are still plenty of large markets the carrier can enter.

Sapporo to be largest route for Jetstar, as it is for Peach

Japan's largest air route is from Tokyo to Sapporo, the country's fourth-largest city but on the island Hokkaido and inaccesible by the shinkansen. Tokyo Haneda-Sapporo is the second largest route in the world by weekly available seats, and Jetstar will offer four daily services, its largest amount of capacity. Sapporo is also Peach's largest route. Although Sapporo has two airports, one is used primarily for intra-island flights while New Chitose is the main airport. Whereas Jetstar will be double disadvantaged on Tokyo-Osaka by serving Narita and Kansai instead of closer Haneda and Itami, to Sapporo the difference between Jetstar and other carriers will only be a single longer airport journey time.

Jetstar will also offer four daily services to Fukuoka, in southern Japan where flying is more competitive than taking the shinkansen. Tokyo Haneda-Fukuoka is Japan's second busiest route by seats, and is the world's fourth largest.

Jetstar Japan's launch will see four more of the world's 20 most populous routes have competition from LCCs at that airport or at alternatives, leaving only three – all in greater China – untouched. Two of the routes are from Hong Kong, to Taipei and Shanghai, and the third between Beijing and Guangzhou. Planned Jetstar subsidiary Jetstar Hong Kong will likely in due course enter Taipei and Shanghai (although it has noted Beijing and Shanghai will not be a strong focus), leaving only Beijing-Guangzhou not served by LCCs. China's sole LCC, Spring Airlines, concentrates its operations at Shanghai as well as Shijiazhuang. With a political climate favouring the country's state-owned carriers, it is not clear when this last standout will also see LCC competition, marking the full entrenchment of LCCs in global aviation.

While the 21st through 30th largest routes are not far behind the top 20 and could with minor growth replace some of the lower top 20, they all primarily already have LCC competition.

After LCCs enter Japan, focus to shift to China – and then domination

AirAsia Japan, also to be based at Tokyo Narita, can be expected to have many route overlaps with Jetstar Japan, firmly entrenching the country as LCC territory, even if further revisions to the model are to be made with greater gains of efficiency. The next frontier is China, where LCC presence is unlikely to change in the next few years, although like with any matter in the country, shifting political winds can bring seismic and short-term changes. The pending launch of Jetstar Hong Kong in the more liberal special administrative region could trickle down to mainland China, which in turn could give greater access to Spring Airlines and welcome the launch of more LCCs.

But China is not the final frontier for LCCs: domination is. As more routes turn to having LCC competition, the next phase will be greater and eventual majority presence. While some carriers in the region remain steadfast about the LCC threat being small or not applicable to them, history tells otherwise, as do other carriers in the present time. JAL's long-term business plan calls for a greater emphasis on long-haul services as its domestic and regional networks become lost to LCCs.

And in a powerful sign of developments to come, the world's most populous route, Seoul Gimpo to Jeju (an island destination in South Korea), at most times of the year sees the majority of traffic from LCCs. It is a reminder to airlines their short- and medium-haul model needs to be changed, whether it is to make a lower-cost subsidiary or end the perks, as Europe is finally realising. 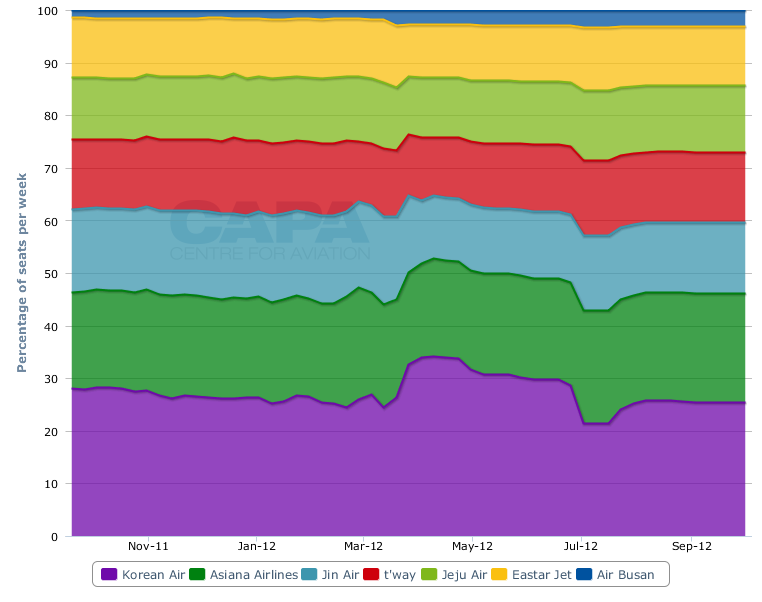 Jeju may be a leisure destination and Korea's LCCs generous and passenger friendly by global standards, but the shift towards LCC domination is occurring. This is the start, not the end – unless you are a resistant legacy carrier.